Mechanical Technology (MKTY) was founded in 1961 as a developer and manufacturer of energy-efficient rotating machinery and instrumentation. In 2016, Brookstone Partners purchased ~39% of the common shares and Brookstone’s founder (Michael Toporek) subsequently assumed the role of CEO. The CEO is a sharp operator, laser-focused on ROIC. In 2020, MKTY started EcoChain to develop a network of cryptocurrency mining operations powered 100% by renewable energy. In Aug-21, MKTY announced they were acquiring Soluna Computing to further augment their mining efforts.

MKTY is successfully building a “green” cryptocurrency mining business that is significantly undervalued based upon fundamental analysis and peer comparisons. They can be successful even if BTC goes to zero. MKTY growth will be visible as they continue releasing monthly site-level financials, providing an imminent catalyst for the market to recognize their growth. 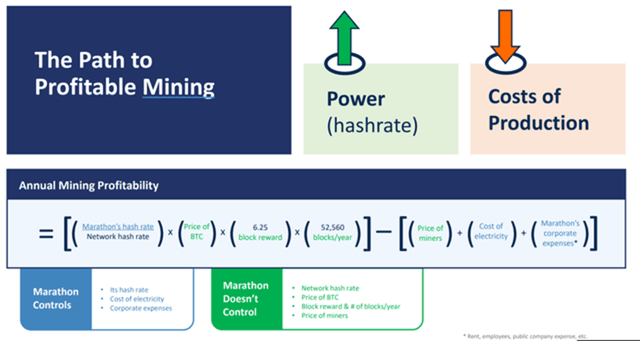 Bitcoin mining is the process of creating new bitcoins by solving a computational puzzle. Bitcoin mining is necessary to maintain the ledger of transactions upon which bitcoin is based. Miners have become very sophisticated over the last several years using complex machinery to speed up mining operations. The main valuation consideration for bitcoin miners is the cost structure of their mining operations. Low power costs, low overhead, and higher hashrate all drive returns. 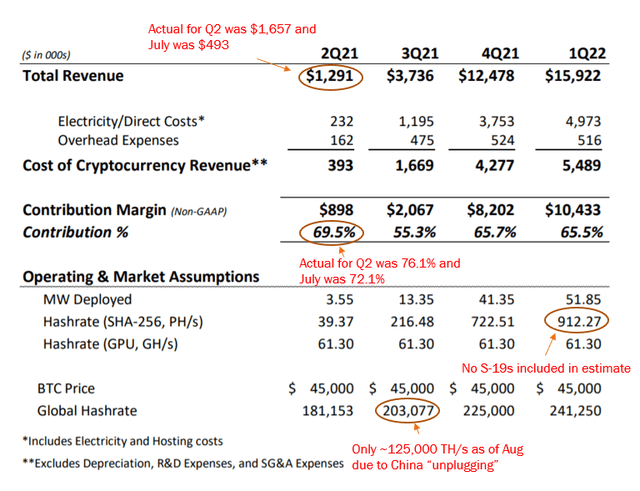 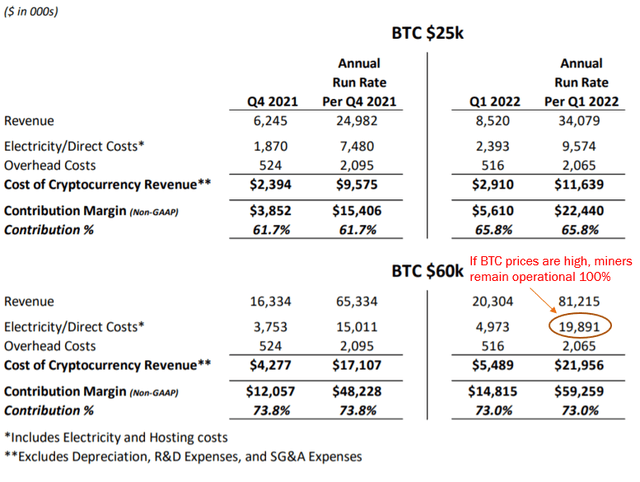 EcoChain previously has provided growth expectations from their secured mining capacity ramp, showing a commitment to transparency that rivals other miners.

To account for the volatility in BTC price, MKTY provided the following sensitivities to their projections: 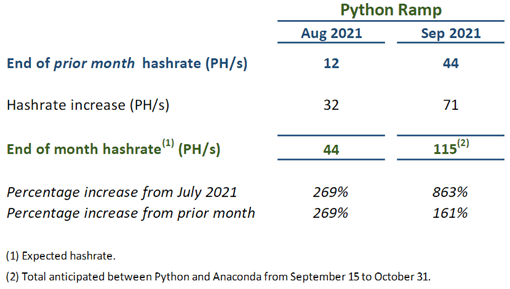 While future growth expectations should always be viewed skeptically, MKTY has already secured the capacity for this growth, which cannot be said for some peers. Python revenue, with 12 PH/s hash rate and a $34k average BTC price, was $217k in July. Taking the PH/s midpoint for August & September, 10% monthly increase in network difficulty, and $45k BTC, we get the following:

Looking at the roadmaps provided by competing miners, it becomes increasingly clear that EcoChain is significantly undervalued. 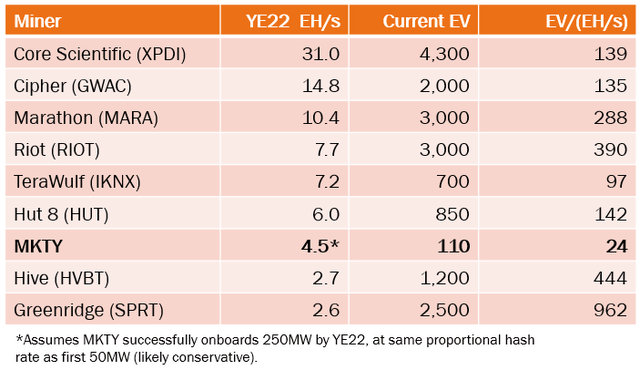 Note - Marathon has since slightly raised their FY22 target to about 13 EH/s, but this does not materially change the above calculation.

Due to legacy business contributions, MKTY even stacks up well against peers using most recent results (EV adjusted to include instruments business again). Many competitors have been excluded above (SPRT, ANY, IKNX, GWAC, etc.) who have not completed proposed mergers.

MKTY has power costs (largest variable input) lower than leading competitors, creating a long-term margin advantage and protecting against any drawdowns in the price of cryptocurrencies.

At a $110M EV, MKTY’s stock could triple before their EcoChain division begins to be valued comparably to peers. They may demand a premium due to lower power costs, but at a minimum, they should be valued at 5x EcoChain EBITDA. Run rate EBITDA for Q1-22 is estimated at $22-59M and will be highly sensitive to the price of Bitcoin and global hashrate.

Bear, base, and upside valuations (using prior, conservative guidance):

This does not include upside from global hashrate decrease, upside from additional mining capacity due to preferred share issuance, Soluna transaction, and premium for lower cost of power. I expect revised guidance from the company will indicate these scenarios could have 50-100% additional upside with S-19 miners and lower network difficulty than anticipated. For example:

The Q1-22 illustration was provided by the company assuming 0.912 EH/s and 241,250 PH/s network difficulty. At a high level, one can see above how this estimate might change given lower global hash rate and potential increases or delays in MKTY bringing their miners online.

Based on ~3-5 year average useful miner life and buildout costs, I estimate maintenance CapEx to be around $5m – generating very healthy FCF margins.

The crackdown on bitcoin mining in China has caused the hashing power on the Bitcoin Network to plummet (i.e. less total miners). A decrease in global hash rate increases profitability to miners, as demonstrated in the formula earlier in this presentation. This has served as an offset to declining bitcoin prices and partially insulated MKTY from the volatility of Bitcoin pricing.

The China crackdown is having a massive impact on the mining world - pricing on mining equipment has gotten so bad that Bitmain temporarily suspended selling new miners. Just a few months ago miners were fighting for the front of the line to order as much new mining equipment as possible.

For businesses that are looking to scale and haven't committed all their capital (i.e. MKTY), this is a perfect opportunity to buy used equipment at a massive discount. As referenced earlier, MKTY just completed a preferred share offering to raise additional funds for mining equipment.

EcoChain (via Soluna) achieves a low cost of electricity by working with utilities to help bring renewable energy onto their grid. One of the issues with renewable energy is intermittent generation and storage concerns - if hydropower is being generated 24/7 but used less off-peak, it's hard to store the energy until it is needed. EcoChain offers a solution - locating their data centers next to substations to help take load at off-peak hours from renewable generation - this helps both the utility and EcoChain. TeraWulf is copying this strategy, but so far has been unable to fully replicate the cost of power EcoChain has achieved.

This compares very favorably with peers like Marathon and Hut 8 who rely on fossil fuels to power a significant portion of their mining operations.

Annihilation Risk: What happens if BTC implodes or mining is outright banned in the US?

Iron Mountain (IRM) currently operates 144MW of data centers earning ~$300m revenue. Lease rates for data centers consistently price >$100/kwH/month – suggesting ~$60m of annual revenue and ~$20m of FFO for EcoChain is not an unreasonable pivot should bitcoin mining implode and they want to sell their capacity to a larger data center REIT. Most of these REITs trade north of 20x P/FFO.

I think about it this way - batchable computing compared to traditional data centers is similar to listing a property as an AirBnB vs. a traditional rental. Income potential is greater, but will require more effort to build a customer base.

MKTY has best-in-class power costs, a significantly lower valuation than any publicly traded mining peers, and was perfectly positioned for China unplugging. There are imminent catalysts – 50MW of capacity already secured and currently being brought online. In the event of a US mining ban or market collapse, MKTY has viable, profitable alternatives to mining should the cryptocurrency market collapse. MKTY is also an inspiring ESG story – enabling grid operators to add renewable power to their mix more effectively. All these factors make MKTY an asymmetric investment at the intersection of green energy, digital cryptocurrencies, and computing.

Disclosure: I/we have a beneficial long position in the shares of MKTY either through stock ownership, options, or other derivatives. I wrote this article myself, and it expresses my own opinions. I am not receiving compensation for it (other than from Seeking Alpha). I have no business relationship with any company whose stock is mentioned in this article.