Welcome to the August 2021 edition of the lithium miner news. August saw lithium prices rise strongly again and plenty of good news from the lithium producers as several of them advance their expansion and lithium hydroxide converter construction/plans.

Benchmark Mineral Intelligence as of Mid-August reported China lithium carbonate prices of US$13,775/t (technical grade) and US$14,250 (battery grade), and for lithium hydroxide prices of US$16,550/t, and stated: "market contacts report expectations that spodumene feedstock prices will rise above $800/tonne (FOB Australia) in late Q3 as converters scramble for material". 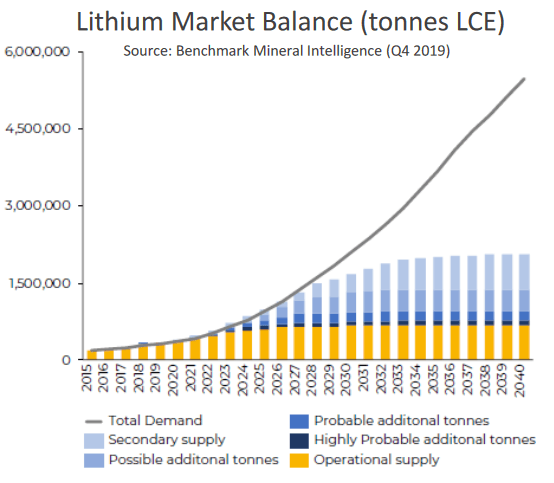 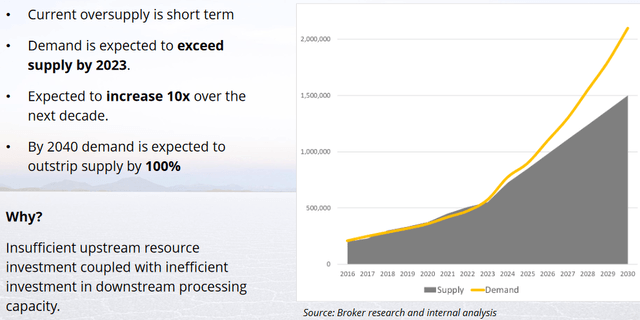 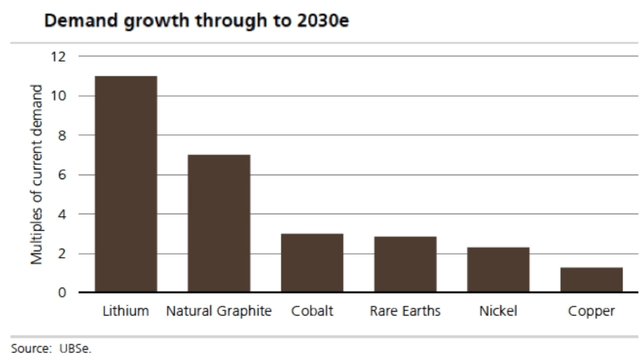 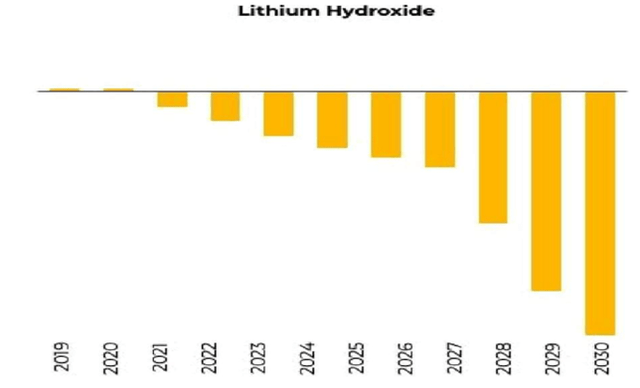 Source: Benchmark Mineral Intelligence (no link as via email)

Specifically, the following milestones will need to be achieved by 2030 to be on track to reach net-zero by mid-century:

Tight battery market is next test for EVs after chip crisis. Rising demand from electric vehicles and challenges in securing raw materials will deliver a battery supply crunch for automakers already grappling with a chip crisis, according to a key Chinese manufacturer. "When the chip shortage is over, the major supply shortage the industry faces would be batteries," Yang Hongxin, chairman of SVolt Energy Technology Co... Demand for lithium-ion batteries from transport and energy storage will surge to as much as 5.9 terawatt-hours a year in 2030, putting a strain on supply chains, BloombergNEF said in an annual New Energy Outlook report published Wednesday.

Note: According to Benchmark Mineral Intelligence battery cell capacity in the pipeline for 2030 is now at 4,300.3 GWh, which equates to about 3.44mtpa lithium in 2030, effectively 10x on 2020 levels.

On July 28 The Korea Herald reported:

The road to an electric vehicle future is paved with lithium... The fact that the automotive manufacturers are going directly to the mine sites to lock up five-plus years of supply is unprecedented.

What Tesla's bet on iron-based batteries means for manufacturers. Elon Musk earlier this week made his most bullish statements yet on iron-based batteries, noting that Tesla is making a "long-term shift" toward older, cheaper lithium-iron-phosphate (LFP) cells in its energy storage products and some entry-level EVs. The Tesla CEO mused that the company's batteries may eventually be roughly two-thirds iron-based and one-third nickel-based across its products. "And this is actually good because there's plenty of iron in the world," he added.

CATL's new sodium ion battery to help ease lithium shortages. The development of a new sodium-ion battery by Chinese battery giant CATL is expected in the coming years to relieve pressure on lithium supplies, which are forecast to see shortages as early as 2022... CATL said last week it plans to build a supply chain by 2023 to produce sodium-ion batteries, which have lower energy density than lithium-ion models, but are fast charging and more resilient in cold temperatures... "It means there's a Plan B if there isn't enough lithium around," he said.

Next-generation battery pioneer sees breakthroughs coming... In five years, it will be changes related to modifying anodes to add more silicon than we have today and using lithium metal. In 10 years' time, all the action will be on cathodes, and you'll pair it with lithium metal. Lithium metal is the end of the road for an anode-you can't get any better than that. Battery materials R&D will all shift focus from EVs to aviation in 10 years' time. We have batteries that are great for passenger sedans, and there's a 400-mile battery range car, but a large portion of your main market-long-range trucks and pickup trucks-is actually still weight-constrained and energy-density-constrained, so those would benefit a lot.

On August 10 the AFR reported:

Buy everything! JPMorgan bullish on lithium miners. JPMorgan's metals and mining team have re-thought supply and demand for lithium and come to one conclusion: buy all the lithium miners. The analysts put "overweight" ratings on all five ASX-listed lithium names under their coverage including IGO Ltd, Orocobre and its merger partner Galaxy Resources, Mineral Resources and Pilbara Minerals.

Will battery minerals demand outstrip supply in the future?... This switch to EVs is an important part of the goal of the International Energy Agency's Paris Agreement to achieve net-zero carbon emissions by 2050... Another challenge facing critical mineral miners is the long lag time to explore a prospect, develop an economic resource, complete the Environmental Assessment process, gain social acceptance, prepare a bankable feasibility study and, finally, build a mine. According to the IHS report, between 2010 and 2019, this process averaged 16.5 years... The Clean Energy Transitions report also notes that in order to adhere to climate goals, the expected supply from existing mines and projects under construction will only meet half of the projected lithium and cobalt demands and 80% of copper needs by 2030. As a result, recycling efforts will play an important role.

Tesla is feeling the combined effects of an ongoing global semiconductor shortage and a limited supply of tier one lithium battery cells, writing in its Q2 2021 earnings presentation that "due to the limited availability of battery cells and global supply chain challenges, we have shifted the launch of the Semi truck program to 2022." Tesla's 4680 cells, which are not yet at commercial production levels, are the likely route of the battery bottleneck which is delaying bringing the Semi to market.

Tesla supplier and world's biggest EV battery maker raising $9B to expand. Tesla supplier CATL is planning to raise $9B through a private placement to help increase its production of lithium ion batteries, capitalizing on investor optimism over electric vehicles. China's top battery maker says it aims to raise 58.2B yuan ($8.98B) by placing 232.9M shares with institutional investors. CATL plans to use the proceeds to fund projects at six new and existing facilities in China's Fujian, Guangdong and Jiangsu provinces, as well as for research and development, and working capital.

EV makers eye bigger battery-metals role by inking mining deals... Electric-vehicle makers are pushing for an intermediary role in mining to secure supplies of key battery metals, according to the head of Wheaton Precious Metals Corp. "We've had discussions on that and Tesla has definitely explored these options," Chief Executive Officer Randy Smallwood said Friday in a phone interview. "There is a real concern on the battery metal side in terms of supply." ... Smallwood said he's seeing increasing interest from electric-vehicle makers to get more involved in the industry and has even had talks with "potential partners" interested in starting their own streaming companies for battery metals including cobalt, nickel and lithium... Tesla Inc. struck a nickel-supply deal with BHP Group last month after CEO Elon Musk had expressed concern about supply due to challenges in sustainable sourcing. 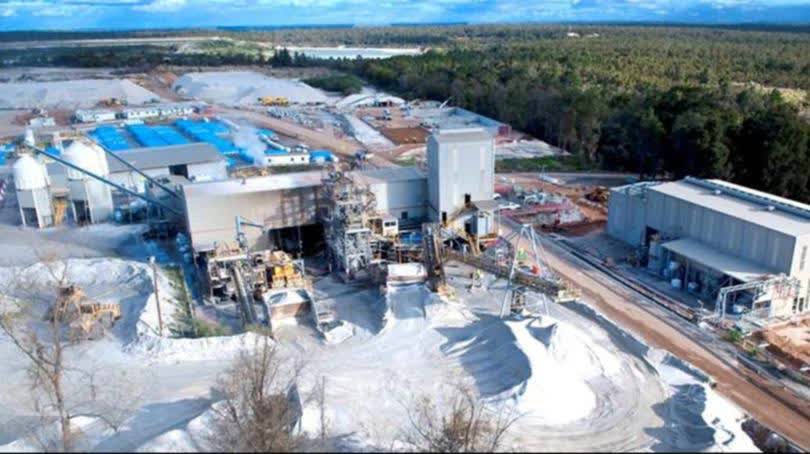 On August 18, SQM announced: "SQM reports earnings for the second quarter of 2021." Highlights include:

SQM lifts global lithium demand outlook, sees 40% rise this year... Q2 earnings improved to $0.31/share from $0.19 in the year-ago period, while earnings in the first half rose 65% over the first six months of 2020. SQM says Q2 lithium sales volumes surged more than 90%, while average lithium prices rose nearly 20% Q/Q, as sales contracts signed last year expire and a higher percentage of sales are invoiced based on the current pricing scenario... SQM says a tightening global market should help average prices continue to rise in H2. SQM is the world's second largest lithium producer and plans to increase its capacity 3.7x by 2025, faster than any other miner...

Tianqi, IGO produce first Australian lithium hydroxide for batteries... Perth-based IGO expects to be producing a saleable lithium hydroxide product by the end of 2021, and a high-quality battery grade product by the March quarter next year, Bradford said. The Kwinana plant is expected to reach its initial 24,000 tonne per year (tpy) capacity by the end of 2022, with another 24,000 tpy expansion to commission in 2024 before doubling that capacity again to 96,000 tonnes in the following years.

Court approves scheme. Galaxy Resources Limited [ASX: GXY] (Galaxy) and Orocobre Limited [ASX:ORE, TSX:ORL] (Orocobre) are pleased to announce that the Supreme Court of Western Australia (Court) has today made orders approving the proposed merger pursuant to which Orocobre will acquire all of the shares in Galaxy (Galaxy Shares) by way of a scheme of arrangement (Scheme).

On August 16, Orocobre announced: "Scheme of Arrangement becomes effective further to its announcement on Friday, 13 August 2021."

You can read the latest investor presentation here.

Diggers and Dealers Day 2: Lithium supply shortage is real, says Pilbara Minerals... Proof in the pudding last week came from the sale of 10,000t of 5.5% Pilgangoora concentrate on its new Battery Metals Exchange platform for US$1250/t, around 3x the contract prices it was receiving 12 months ago. "Prior to this auction the maximum price referenced for spot was about US$900/t," he told delegates at the Diggers and Dealers Mining Forum in Kalgoorlie today. "Again, the icing on the cake is this product is a little bit like our discard, it's 5.5%, the equivalent headline price achieved (for 6% product) is over US$1400/t... "China has built too much conversion capacity for the available supply."

You can view the latest company presentation here.

2021 - Progress on lithium projects in Zeitz, Germany and in Zanesville, Ohio, both in the planning stage.

2023--> Lithium hydroxide facility in Bitterfeld-Wolfen Germany with production set to begin in 2023.

NB: LAC owns 49% of the Cauchari-Olaroz project and partners with Ganfeng Lithium (51%).

Investors can read my article "An Update On Lithium Americas."