As we detailed in Why High Yield Should Pummel Tech, our portfolios focus primarily on high yield value stocks (SPYD) and largely avoid tech (QQQ). This approach has paid off handsomely as our portfolios have crushed the broader market over that period. 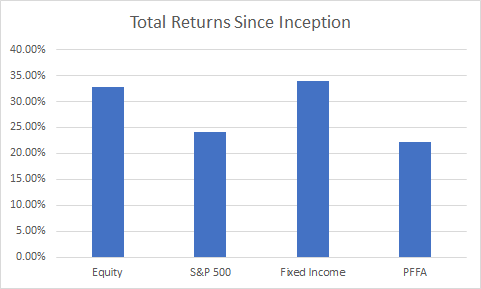 Moving forward, we continue to have conviction that there remain numerous attractive opportunities among dividend paying value stocks and that the overall risk-reward proposition in this sector of the market is superior to that found among most disruptive tech (ARKK) stocks due to:

As a result, we remain on the sidelines of most tech stocks and keep our portfolio's exposure to the sector small.

That said, we have had several successful forays into tech, including: 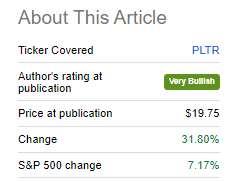 Moving forward, PLTR remains our highest conviction pick of our very few in the tech sector for the following reasons:

Given that A.I. supremacy will play an increasingly important role in national defense and economic might in the future, and the Chinese, in particular, are investing extremely aggressively in an effort to overtake the United States in this area, it is highly likely that the U.S. government and its allies will increasingly demand PLTR's services.

This was on full display in the company's Q2 results as government revenue surged a whopping 66% year-over-year on the back of new deals with the U.S. Army, U.S. Air Force, U.S. Coast Guard, Health and Human Services, and Center for Disease Control. This strong and rapidly growing base of support helps provide a firm floor for the company's valuation and combines with their debt-free balance sheet to make it very unlikely that the company will experience financial distress for the foreseeable future.

The other side of the PLTR coin - the commercial Foundry business - is also seeing signs of life.

With 20 net new customers signed in Q2, the commercial customer count increasing by a whopping 32% sequentially, and the average revenue from the top 20 customers increasing by 8.3% sequentially, it appears Foundry is poised to see accelerating growth in the coming quarters. Additionally, management believes that its platform is becoming increasingly indispensable, stating on the earnings call about companies that haven't joined the platform:

Probably at a fundamental and compounding disadvantage. To remain relevant, you need to join.

These numbers should only continue improving further as the company continues to scale rapidly thanks to its near 50% year-over-year revenue growth rates.

PLTR continues to have all of the elements needed to generate phenomenal long-term growth by capturing share in a massive total addressable market that is already well over $100 billion and is likely to multiply into several times that number over the coming decades. Between the dominant moat in the increasingly mission-critical government business, the accelerating growth in the commercial business, and their improving profitability metrics, PLTR is poised to generate attractive cash flows for investors in the future.

We are happy that insiders have skin in the game and that their ongoing compensation continues to be impacted by the stock price. Our issue is not that the company is issuing new shares to pay employees. It keeps them aligned with shareholders and also helps them to attract and retain talent without placing undue stress on the balance sheet.

However, we do have two big issues with how PLTR is going about it:

Overall, however, we remain bullish on PLTR as a leader in an industry that is all but certain to see explosive growth for the foreseeable future. Additionally, if Foundry continues to accelerate its growth, we think that PLTR could generate exceptional returns and one day become a trillion-dollar company as we discuss in detail in Palantir Stock: The Path To A $1 Trillion Valuation.

We rate PLTR shares a Buy here with a fair value estimate of ~$27 per share.

We are the fastest growing high yield-seeking investment service on Seeking Alpha with 1,000+ members on board and a perfect 5/5 rating from 100+ reviews:

For a Limited-Time - You can join us at a deeply reduced rate! 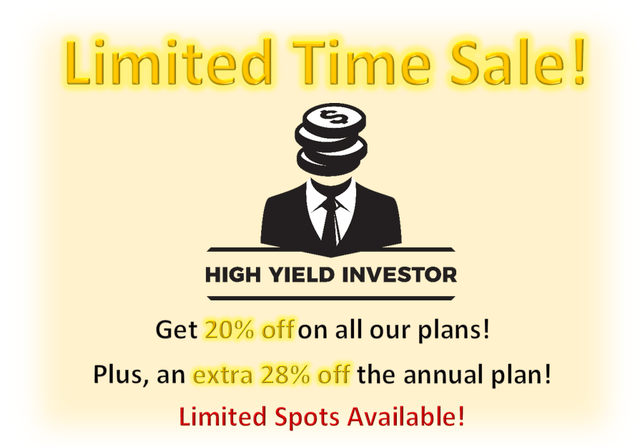 High Yield Investor
8.58K Followers
Author of High Yield Investor
Become a “High Yield Investor” with our 8% Yielding Portfolio.
High Yield Investor is a leading community of income investors that is supported by Leonberg Capital, a high yield specialist with over 2,500 clients, including hedge funds, private equity firms, family offices, and high net worth individuals. We spend 1000s of hours and over $100,000 per year researching the market and share the results with you at a tiny fraction of the cost. Joining our community will help you identify the most profitable opportunities BEFORE the end of the pandemic changes the entire dividend stock landscape and allow you to earn a sustainable 6-8% dividend yield that grows over time. Click here to learn more!