Harley-Davidson (NYSE:HOG) is the most iconic American motorcycle brand and one of the largest brands in the country. For a very long time, Harley-Davidson was known as the pinnacle of the motorcycle world, but in recent years, the company has seen declining shipments in domestic markets due to an aging customer base and more expensive products. While the valuation is in line with this downward trend, I am not interested in the company as struggles to branch out to other demographics persist. 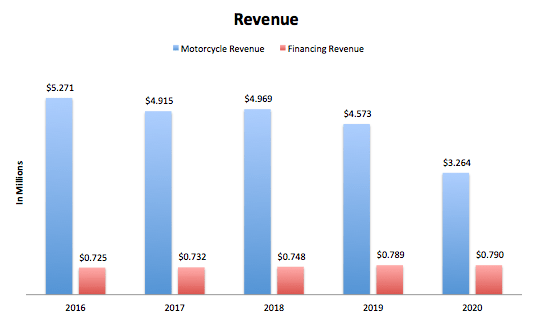 Revenue at the company has consistently declined within the Motorcycle segment. The segment has seen a double-digit rate of decline, decreasing by 10.06% per year. On the other hand, the Financing segment has stayed consistent at around $700+ million per year.

The reason for such drastic revenue decline is due to the market for Harley-Davidson branded motorcycles. The core customer base is aging, and younger motorcyclists are more apt to purchase cheaper options. The consequences can be seen in the rapid decline of US shipments over the past five years. US shipments have declined at a rate of 15.21% per year. While 2020 was an atypical year in terms of world events, the company is not meeting the task of renewing the customer base within its largest market. Looking at the graph shows that international shipments have also trended downward and have declined 8.91% since 2016. With the struggles in the United States, Harley-Davidson is looking to expand in Europe and other regions. The company has a stated goal of growing international to 50% of total volume. While the company will probably meet this goal, it will not be in the way of succeeding as US shipments decline faster than international. 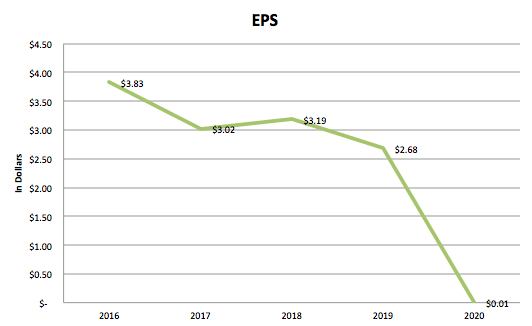 The result is a rapidly decreasing net income and EPS. As can be seen above, Harley-Davidson has lost over a dollar per share in EPS from 2016 to 2019. This is not a great sign for shareholders' current and future.

This Year So Far

While 2020 was a terrible year for the company, 2021 seems more promising. For the first six months, Harley-Davidson has seen revenue increase by 44.9% from the prior year. Net income so far has totaled $465 million or $3.01 per share. The United States and Europe 601+cc motorcycle registrations have bounced back, with the growth of 31.4% and 19.1%, respectively. On the surface, this seems like great news, but when looking at the long-term history, it shows a different story. While the market has bounced back to normal levels compared to 2020, Harley-Davidson still hasn't seen improvement in demographic expansion. Yes, motorcycle shipments did increase by 73% in the past six months compared to last year, but international shipments have decreased by 5.5%. This is despite registrations rebounding. Also, this 73% gain in shipments from 2020 is only a 0.5% increase from 2019. This is while international shipments declined by 31.95% from 2019. Total revenue is slightly down in the six months of 2021 compared to 2019. That being said, the company saw some operating margin expansion and investment income to bolster the net income this year. Overall, on the surface, its comparable numbers to 2020 look fantastic, but when compared to 2019, the company is flat. The fact that registrations in Europe have rebounded, but the company lacked growth in shipments internationally is concerning.

While the company has trended downward for some time now, it has remained profitable. Therefore, the balance sheet has held up pretty well. The company has nice liquidity, with current and quick ratios of 1.3x and 1.16x, respectively. This shows that Harley-Davidson can pay off its current obligations. The company is a bit leveraged with a debt-to-equity ratio of 3.99x. This is a bit high, considering the revenue and net income trends, but as of now is manageable but may need to be watched. Overall, the financial standing of the company has not been compromised by poor operational results. The valuation is in line with the operational climate of the business. I would like a much lower valuation to provide an ample margin of safety due to the concerns listed above.

While 2020 results are not a great representation of the company at large, 2021 seems to be on par with 2019. Harley-Davidson has yet to show me the company can reach other consumers outside the core base. Overall, the issue is that, while the Harley-Davidson brand is strong, it is strong amongst an aging customer base that is slowly depleting. I have yet to see any real solid evidence in the numbers to support the idea the company is expanding its reach to younger, lower income, diverse demographics.

The company has seen consistently declining Motorcycle segment revenues and shipments in the United States and Europe. The results are declining earnings for Harley-Davidson each year. While the valuation seems to be in line with these slowly declining results, I would like even more of a margin of safety as growth amongst other demographics seems distant.