While many REITs perform well over the years, not every company that is classified as one is destined to do so. Some experience mixed financial performance or even a decline in sales and profitability. For these companies, the picture can be made even worse when you throw in a pandemic or other crisis like what we recently saw. However, there is also a benefit to considering these types of firms. And that is that these companies can also often trade at low multiples. If the price is low enough, even a mediocre business can make for a sensible investment for those who are patient enough to wait out the pain. One such example of this is Cedar Realty Trust (CDR), an owner of retail assets there has a special focus on the grocery anchor business. Recent financial performance from the firm has been less than ideal. But shares today are priced at levels that make it an appealing prospect moving forward. 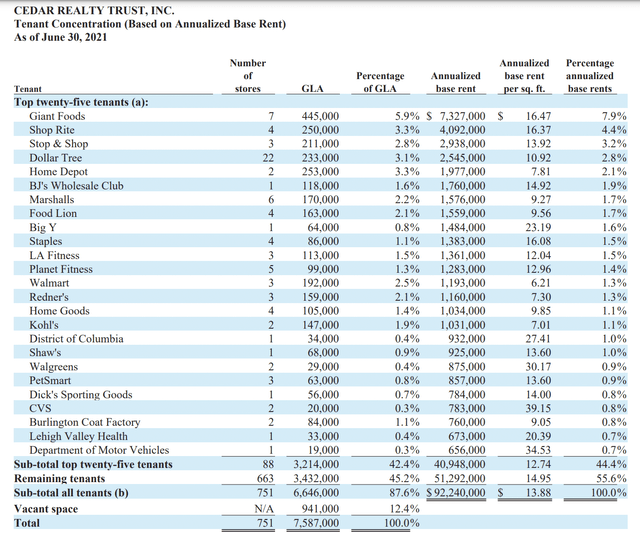 According to management, 28.2% of the company's annualized base rent comes from grocery anchor tenants. Next in line are limited and fast service restaurants at 7.9%. And in third place our fitness companies at 5.2%. Combined, it stopped 25 largest tenants account for 44.4% of its annualized base rent. The largest of these is Giant Foods at 7.9%. Shop Rite is a close second at 4.4%, while Stop & Shop comes in third at 3.2%. What is also interesting is the composition of rent based on property size. 73.2% of the company is occupied gross leasable area comes from properties that are more than 10,000 square feet in space. And yet, they only account for 59.3% of the company's annualized base rent. This means that smaller tenants, while still a minority from a revenue perspective, do payout sized prices compared to the larger tenants the company services.

One important thing for investors to consider for any REIT is just how long the leases that it has are good for. Across the 751 tenants the company counted as of the end of the latest quarter, those representing 4.2% of the company's annualized base rent are due to see their contracts come to an end this year. Next year, that figure is 8.3%. That said, leases representing 46% of the company's annualized base rent are not due to expire until after the year 2025. This number excludes a further 3.4% that are on a month-to-month basis with the business.

Over the past few years, Cedar Realty has seen its revenue more or less flatline. Between 2016 and 2019, it ranged from a low of $144.08 million to a high of $152.02 million. No particular trend was clear. But then, in 2020, the COVID-19 pandemic struck. Fortunately for investors, Cedar Realty held up better than some other REITs. Revenue declined modestly to $135.54 million. This year, one might think that the company was turning around, but results so far are mixed. While revenue in the second quarter this year was up 12.6% compared to the same time last year, revenue for the full year so far is down 7.5%.

Just as revenue remained in a narrow range, so too did profitability. Operating cash flow range from $53.68 million to $59.25 million over the four years prior to 2020. Then, in 2020, it declined to $42.58 million. It is worth noting that Cedar Realty has a significant amount of preferred stock outstanding. Right now, that stock is worth $161.25 million. And while preferred distributions are not taken out of operating cash flow, I do believe that since they are required, we should deduct them from it for the purpose of valuing the company. Doing so, you would see more of a downward slope for operating cash flow. With the exception of a slight jump experienced in 2018, this metric would have declined consistently from $44.86 million in 2016 to $31.83 million last year. FFO, or funds from operations, followed a similar path. However, the results in 2020 were indistinguishable from the range experienced in the 2016 to 2019 period. The overall trend for EBITDA, on the other hand, has been negative, with this metric declining from $88.42 million in 2016 to $73.08 million in 2020.

Financial performance on the bottom line has been similarly mixed this year. Operating cash flow in the first two quarters of 2021 is nearly flat, having risen slightly from $24.52 million to $24.80 million. Adjusting for the preferred distributions, this would have risen from $19.14 million to $19.43 million. FFO, on the other hand, actually fell from $22.45 million to $17.08 million. And EBITDA declined from $39.35 million to $32.40 million. It is worth noting that some of the pain the company has seen involves a reduction in the leased assets that it has. The leased rate of the business at the end of the latest quarter was 88.7%. This compares to the 90.1% seen the same time last year. It is also worth noting that in the second quarter the company only collected 96.8% of the rent that was due to it.

From a pricing perspective, shares look rather attractive. Using the estimates from 2020, the company is trading at a price to adjusted operating cash flow multiple of 7.2. If we assume the company sees its bottom line improve to 2019 figures, then this multiple would drop to just 5.4. The price to FFO multiple stands at 5.7, while the equivalent for 2019 would be 5.6. And the EV to EBITDA multiple of 12.4 is only slightly higher than the 11.8 should the company revert back to performance achieved in 2019. In addition to the mediocre performance in recent years, another negative for the company is its net leverage ratio. Excluding its redeemable preferred stock, this metric comes out to 7.1. That is awfully high and it needs to come down further.

When it comes to valuing the company, I decided to compare it to the five highest rated of its peers as defined by Seeking Alpha's Quant platform. On a price to operating cash flow basis, these companies ranged from a low of 12.3 to a high of 22.1. Of these, Cedar Realty was the cheapest. I then did the same thing using the EV to EBITDA multiple and found a range of 15.5 to 26.9. Once again, our prospect was the cheapest of the group.

Based on the data provided, the financial track record of Cedar Realty could be better, but it is not horrible. The company is at least staying more or less in a narrow range. In addition, shares of the entity are trading at a low price no matter how you stack it. Some of this is warranted because of the mixed financial performance in recent years. And some of it is warranted because of the high net leverage ratio the company has. However, if the firm were to see financial performance improve back to what we saw in 2019 or the years before it, the entity could offer patient investors a decent amount of upside.