A month ago we issued a bullish call on platinum, since then the price of platinum (NYSEARCA:PPLT) has continued to fall relentlessly. 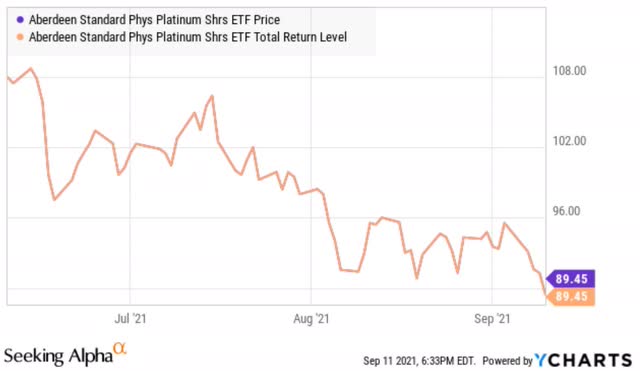 As investors, it's important to constantly reassess your positions especially when the market goes against your expectations – and with platinum that is clearly the case. So why the drop and does it change our bullish thesis for the white metal?

The biggest factor driving platinum and palladium (NYSEARCA:PALL) down has been the ongoing semiconductor bottleneck. This bottleneck stems from COVID factory shutdowns primarily in southeastern Asia (Malaysia, Vietnam, Singapore, etc.) where most auto-chips are manufactured. While we expected the situation to moderate as the summer wore on, it progressively got worse and dragged down auto production and platinum and palladium which are used in that production.

When it comes to commodities the “Trend is your Friend” generally holds for many technical investors – and the technical for platinum and palladium have been extremely poor.

When looking at the most recently released Commitments of Traders (CFTC) data, we see that is clearly evident amongst Managed Money (speculative) traders. 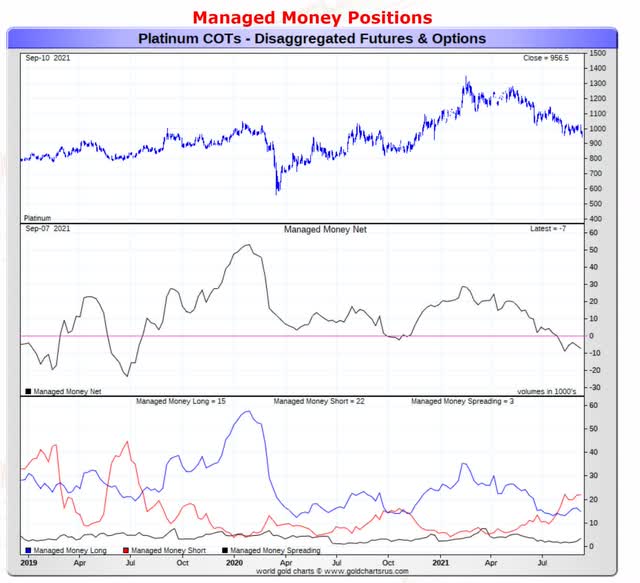 This data is as of Tuesday’s close (platinum was trading slightly under $1000 / ounce then) so it's definitely a bit dated and we expect the positions to be even lower (i.e. more short). But even with this data, we see that speculative short positioning (red line) has hit a two-year high.

When looking at a longer term chart we see the following: 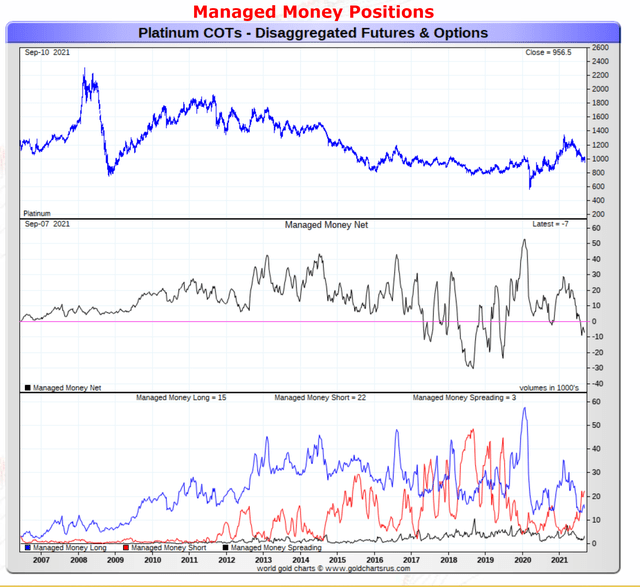 The spike in short positions is obvious, but the managed money long positions (blue line) has hit its lowest level in 12 years since 2009(!).

While this trend can continue, the contrarian boat is now favoring the long position here as there is plenty of room for long positional buildup and shorts are starting to get stretched. If there is a change in sentiment due to any fundamental shift (COVID cases dropping in Malaysia, automaker production gains, etc.) then there is the potential for a strong reversal.

And we do believe there are the beginnings of some green shoots.

Is Our Bull Case for Platinum Still Intact?

While auto production cuts continue to occur, it will be difficult for platinum and palladium to firm up in price. The key here though isn’t the auto cuts as that is already built into the price, it is the difference between future expectations and what actually happens. Will COVID production cuts in Malaysia continue? Will October and November firm the chip situation?

It is still a bit early, there may be some signs of the situation turning around for automakers.

Based on the most recent data from Johns Hopkins, it looks like the peak of the COVID crisis in Malaysia may have passed. 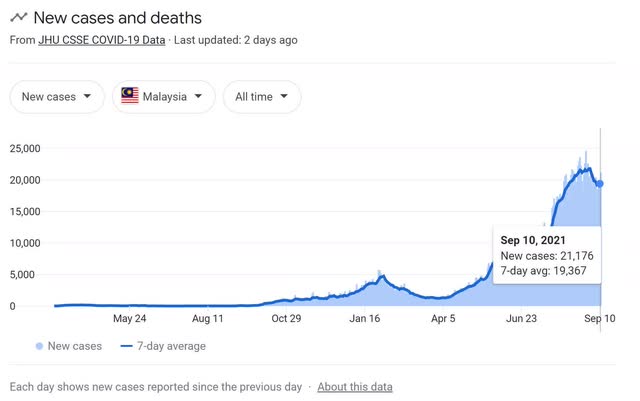 If that’s the case then we should start seeing cases drop and of course restrictions on production ease. Additionally, it looks like Malaysia has decided that starting and stopping the economy because of COVID is no long-term solution, so starting in late October they will be treating COVID as an Endemic not a Pandemic – which means less production restrictions as they will learn to live with the disease (similar to SARS).

This also may be a reason why GM CFO Paul Jacobson recently sounded an optimistic tone at the RBC’s Global Industrials Conference (emphasis ours):

But the situation has changed from the beginning of the year, when limited chip fabrication capacity hurt vehicle production, he said. "What we're seeing right now is really in the back-end processing facilities that are in Southeast Asia," he said. "The good news for that is we typically see the throughput at those facilities run faster than the fabrication."

Once plants in Southeast Asia can boost production, Jacobson expects a more consistent flow of chips.

Even in the Toyota production cut news on Thursday, when they raised expected unit loss in September to 430,000; they announced that October cuts would be 330,000 – which is 100,000 units less than what was cut for September. While Toyota could always upsize the October vehicle losses (like they did for September) this could be a sign of production numbers picking up.

"Although the outlook for November and beyond is unclear, current demand remains very strong. As a result, the production plan for November and beyond assumes that the previous plan will be maintained," it said, cautioning that things are still in flux. "We are continuing to assess expected production in October, and we will announce additional details in mid-September."

Kumakura said Toyota will do all it can to make up the lost volume later in the fiscal year.

“As for our recovery plans, we have already planned for production at high levels for the second half of this fiscal year, so we will be working closely with our production department to work out details,” the Toyota procurement manager said. “We will likely consider introducing weekend shifts and revise operations. We will consider how much we can recover.”

While uncertainty remains, we may start seeing production improve slightly in October, and then rebound significantly at the end of the quarter and early next year as Toyota makes up for production losses via extra shifts. Of course, this wouldn’t only be Toyota trying to make up for lost production as all the other auto-manufacturers try to rebuild their inventories.

Which brings up the biggest short-term catalyst for all PGMs: the expected massive worldwide auto-inventory rebuild.

Anybody trying to buy a car (including myself) knows that dealerships across the US (and I’d imagine other countries) are holding very few cars in inventory.

In the United States, vehicle stock levels plunged to a record low in August, after sliding through much of the summer. At the end of the month, there were only roughly one million vehicles on dealer lots or in transit, which translates into less than a month’s supply of available inventory, according to research firm Wards Intelligence. That number is down 58% from the prior-year August, when supplies were also depressed and around 68% lower from 2019 levels. Basically, one-third of normally auto inventory was present on dealer lots.

In chart form, the US Bureau of Economic Analysis shows US inventories as follows (Note this doesn’t include transit & other numbers that Cox Auto includes so we’re focusing on the decline not absolute numbers): 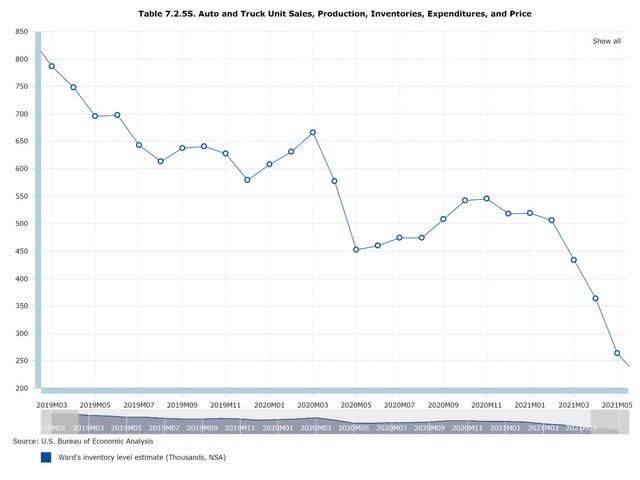 What’s stunning is that this is only over the past two years! Eventually this chart will turn around and those inventory levels will start to increase. What would that mean? A massive growth in production and the inputs needed for that production – including platinum and palladium.

We do not know when exactly that will be we just know it will start happening when some of the supply bottlenecks ease up. When they do, we expect this massive rebuild of auto-inventory to create an extremely bullish environment for all of these inputs.

While we hate to try and catch the proverbial “falling knife” in the platinum and palladium markets, we think the opportunity is too great to sit back and wait for an obvious turnaround. At $950 / oz platinum and $2070 / oz palladium, knowing that during the first 5 months of US production our numbers showed significant increases in both platinum & palladium industrial usage, we think investors willing to gut it out through a potentially painful September for PGMs have significant upside during this turnaround.

We have been burned in the past trying to wait for bottoms, so we don’t want to take that chance when there is a fundamentally strong investment case – especially with such a large short position that could see a massive weekly price increase simply due to short-covering. Contrarian and longer term investors looking for an investment that can benefit from industrial growth and inflation protection (platinum & palladium are precious metals) should consider establishing or increasing positioning during this weak price period.

For investors who want to invest in platinum, there aren’t that many options. Investors could look at platinum miners like Sibanye Stillwater (SBSW), Impala Platinum (OTCQX:OTCQX:IMPUY), and Platinum Group Metals (PLG), but there is operational risk at work here and if we see issues in South Africa or with rising production costs, a higher platinum price may not outweigh those risks. Our preferred option is to invest directly in the metal by buying Aberdeen Standard Physical Platinum ETF (PPLT) which is physical ownership of platinum ounces. That way investors avoid operational risk and can directly benefit from a rise in the platinum price.

Hebba Investments
7.36K Followers
I'm an asset manager at Hebba Alternative Investments with a focus on real assets. In my articles I like to focus on events that affect the macro environment for assets (especially gold and silver), and also introduce readers to different metrics that I believe are under-utilized when assessing investments. On a more personal note, I'm a firm believer that there can be honesty, morality, and integrity in finance (though its rare) and i'd like to believe that I stick to those principles. Thus I never "pump and dump" stocks, I always list the securities we own, and I take it very seriously when I recommend a company - I do not want to see any investors/readers lose money because of my recommendations. I'm not always right with recommendations, but investors and readers can know that I always tell the truth (there is no deception) and I eat my own cooking as recommendations are either always owned OR the reason I dont own them is given (usually related to restrictions on stocks I can buy). Advising people in financial matters is a serious issue and integrity is much more important than money to me, but I do believe both can co-exist. You live with money, but after your death you only have your morality and integrity and thus i've made my choice between the two. A bit philosophical for a bio, but I dont think there's a better way to give investors my background than that. We offer investors a free weekly email list detailing gold, silver, and general economic markets which you can sign up for at: http://www.communitysynergy.com/subscribe/hebbainvestments_subscribe.html
Follow

Disclosure: I/we have a beneficial long position in the shares of PALL either through stock ownership, options, or other derivatives. I wrote this article myself, and it expresses my own opinions. I am not receiving compensation for it (other than from Seeking Alpha). I have no business relationship with any company whose stock is mentioned in this article.

77 Comments
To ensure this doesn’t happen in the future, please enable Javascript and cookies in your browser.
Is this happening to you frequently? Please report it on our feedback forum.
If you have an ad-blocker enabled you may be blocked from proceeding. Please disable your ad-blocker and refresh.