The Software Side of Life
4.34K Followers

Affirm (NASDAQ:AFRM) reported a very strong quarter to end their fiscal year and provided FY2022 guidance that seems conservative. Not surprisingly, the stock popped nearly 35% as investors' bullishness came into the light. BNPL is a relatively new credit offering that enables consumers to repay a transaction over a series of installment payments, rather than the one large, upfront payment.

However, I believe there remains an underlying credit risk in this business model that investors might not be fully appreciating. Consumers have seen a windfall of cash over the past 18 months given the many stimulus benefits that government has put into place. This has enabled consumers the ability to make larger purchases than normal in addition to paying down debt.

Over time, as these stimulus programs wear off and consumers naturally build up their credit-related debt, which includes BNPL, I believe credit risk will rise. In a credit crisis, it's possible that consumers focus more on their essential debt, such as mortgages and auto loans, rather than the $50 Amazon purchase that is being paid back via BNPL installments.

The stock has been a massive winner since late May and is now trading just below their all-time highs. Driven by the significant rise in BNPL options and Affirm's latest announcement of working with Amazon and rolling out Affirm Debit+, investors have become very bullish around the long-term prospects.

Affirm currently trades at over 27x FY2022 revenue as long-term growth is already baked into the stock's price. Using very bullish growth targets for the next two years, we can see a path towards valuation of around 13x FY2023 revenue, though it could be the best-case scenario.

Even at 13x FY2023 revenue, the stock seems a little expensive. There remains an underlying credit risk within the business model. Plus, the average BNPL consumer is likely somewhere who was unable to get a credit card, thus their credit profile is already subpar.

At the stock's current levels, I believe there should be some caution in the stock. Yes, long-term growth remains bright, but that appears to already be priced in. As competition heats up, we could see pricing power of BNPL companies weaken, thus squeezing potential profits from the already money-losing business model of Affirm.

For now, I think investors are better off staying away from this name.

Affirm reported a very strong end to their fiscal year with total revenue growing 71% to $262 million, which was over 15% above consensus expectations for $224 million. GMV continues to remain very strong, with growth of 106% to $2.5 billion. Excluding Peloton, which is becoming a lower customer concentration for Affirm, GMV growth was a very impressive 178%. 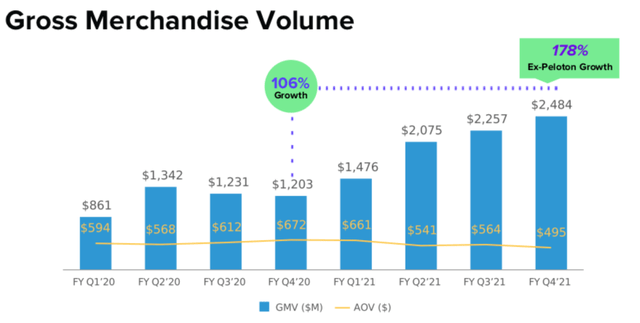 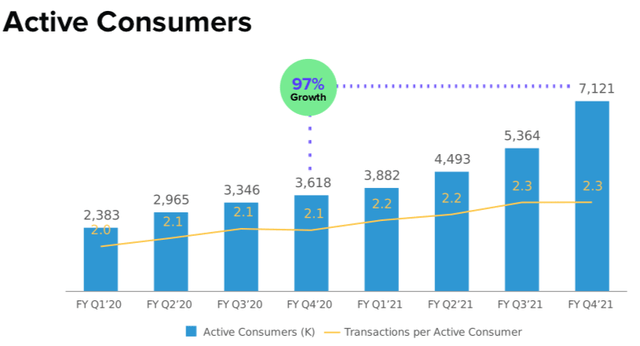 For the first quarter, Affirm is expecting revenue of $240-250 million, which was above consensus expectations for $232 million. GMV growth is expected to be nearly 70% to $2.47 billion at the midpoint.

To start the year, it appears management's guidance is quite conservative, which is likely one of the reasons why the stock popped over 30% after earnings. Affirm's GMV/revenue guidance for the year also does not include any potential contributions from their recently announced partnership with Amazon or from the rollout of Affirm Debit+. In addition, guidance assumes a moderation in GMV/revenue from Peloton. So in essence, guidance includes the negative impact stemming from Peloton but does not include the potential upside from Amazon and their Affirm Debit+ product.

Why There Is Some Skepticism?

Yes, there has been significant growth in the BNPL space over the past year, but I am a little more skeptical on the long-term viability. I believe BNPL is a great alternative form of credit for consumers to use when making larger purchases, but I also believe there are some limitations.

First, while the number of transactions per active consumer has continue to slowly tick up to 2.3, I believe there is ultimately a cap on how high this can grow. Yes, by expanding the number of merchants, including both via Shopify and Amazon, there is the potential for more transactions to occur. However, the average consumer is not likely to use BNPL services for everyday transactions.

Second, the types of transactions that make sense for BNPL seem to be more limited around larger ticket sizes. For larger dollar purchases, it does make sense to use some sort of credit (ex: credit cards, BNPL). But when the average ticket size moves lower, such as grocery stores, drug stores, and restaurants, consumers are not likely to move towards installment payments.

While credit card debt remains the fourth largest category of debt held by US consumers, BNPL-related debt is just getting started. As I mentioned earlier, BNPL is another form of credit and over time, assuming consumers keep using BNPL products, they will naturally build up credit-related debt. In addition, BNPL users are typically people that are not able to successfully get a credit card. Thus, their credit profile is likely to be lower than the average credit user, meaning there is an implied higher risk.

Third, BNPL has benefitted from the many forms of government stimulus over the past 12-18 months. Ranging from the direct stimulus payments the government has sent out over the past 18 months to increased unemployment benefits, consumers have seen an increased amount of financial help. As these stimulus programs slow down, consumers may be faced with less cash inflow benefits from the government, thus making it more difficult for consumers to make credit-related payments.

Yes, BNPL-related GMV will likely to continue to grow over time, but there are several credit-related risks that investors should be aware of. Given the significant rise in BNPL since the pandemic, we have not yet seen a credit crisis play out. It's a little difficult to know how much BNPL debt will continue to be repaid once we enter our next credit crisis. One would think consumers would focus more on their housing and auto loans as their immediate credit repayments, rather than the $50+ purchase on Amazon via Affirm.

Given the company's strong performance to end the year and guidance seeming quite conservative, it's no surprise the stock popped post-earnings. Yes, the 30%+ jump was more than my initial expectations, but investors have become very bullish around BNPL and Affirm is a leading player.

Valuation can be challenging with these fast-growth names with a lot of positive sentiment around them. Clearly, investors are willing to pay a premium price to own what is thought to be the leader of the BNPL space. But, long-term investors should take a closer look before building a position.

The company has a current market capitalization of $33 billion and with around $1 billion of net cash, Affirm has an enterprise value of $32 billion. For FY2022, the company is expecting revenue of $1.16-1.19 billion, the stock is currently trading around 27x FY2022 revenue.

Yes, this is a premium valuation to pay, however, the company's FY2022 revenue guidance appears pretty conservative and growth is likely to remains very strong over the next few years. Let's assume the company generates several beat and raise quarters with FY2022 revenue ultimately coming in around $1.4 billion, nearly 20% above the midpoint of guidance.

If FY2023 revenue remains strong at 75% growth, we could see revenue close to $2.5 billion. At these very bullish levels, the company's valuation is around 13x FY2023 revenue. Yes, this does assume significant growth over the next 24 months, but I believe investors are valuing the company on the longer-term growth opportunities.

My biggest concern is whether or not this growth is truly sustainable. Recent government stimulus has given consumers consistent positive cash flow over the past several quarters. This has allowed the everyday consumer to make larger purchases, considering many individuals are still receiving stimulus benefits. Over time, as these benefits wane and as credit starts to tighten, I believe there is a risk that BNPL growth could slow down.

For now, long-term investors should remain in their positions, but I would use a little more caution with building up a position at current valuations. It wouldn't be surprising to see the stock remain a little range bound in the near-term as competition remains intense and there are low barriers to entry in the BNPL market.

Over the long-term, I believe the stock could become more volatile given the concerns about credit and repayment, especially as consumers start to receive less stimulus benefits and build up credit-related debt through BNPL services.

The Software Side of Life
4.34K Followers
Individual investor with hands-on experience in the equity markets. Largely focusing on Tech companies or major mispricings in the market.