(This report is was issued to members of Yield Hunting on Sept. 5th.)

Major indices hit record highs again this week with mid-caps joining large-cap at all-time highs. August was the seventh consecutive month of gains for the S&P.

Emerging markets outperformed again and have staged a massive rebound in the last two weeks for more than 6%. The S&P rose half a percent but the Nasdaq was up 1.6% along with the EAFE (international developed). Real estate, discretionary, utilities, and staples did best. Commodities also did well.

The big new item on the week was the jobs report which came in well below expectations. Nonfarm payrolls rose just 235K compared to expectations of around 700K. The only real positive was that the prior months' reports were revised higher. The unemployment rate fell to 5.2%.

The main driver of that sluggishness was the delta variant as the leisure and hospitality sector came to a virtual halt in August. Credit card spending, as indicated by Bank of America, is down compared to both June and July. TSA checkpoint numbers are also down.

In the report, it also showed wages increasing 0.6% m/m sparking some inflation worries again. Interest rates rose on the weak report possibly because of the wage data. But JPMorgan noted that wages are being artificially boosted by lower income workers staying home and higher income workers going back to work.

A new coronavirus strain is climbing the worry wall. This variant is called "Mu" which the WHO says has the potential to break through the immunity provided by previous Covid infection or vaccines. Obviously, as I stated in the monthly newsletter, this has the potential to derail the markets. 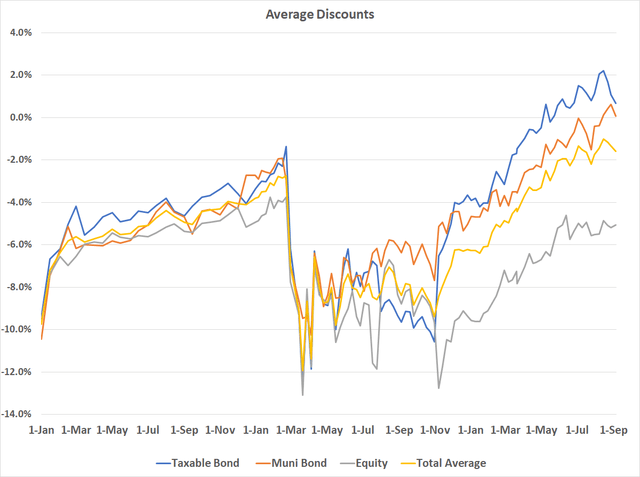 Discounts widened for the third straight week with taxables going from 2.21% on August 15 to +0.68% on September 5. While 1.6% is not all that worrisome, the trend is starting to be. As I noted in the monthly, I fully expect CEF investors to start worrying more about interest rates and trim their holdings.

Only a few sectors finished lower on the week in terms of NAV or price with munis being the most notable. Tax-free nationals were down just 10 bps on NAV but down 70 bps on price widening the discount out about 60 bps.

In terms of funds, the PIMCOs got clobbered with the three funds that trimmed their distributions this week losing more than 12-14% of their premiums in two days. This is the risk of high premium funds. All the PIMCOs corrected, though some only mildly. We will have more comments below about it plus an update early next week.

BrandywineGLOBAL – Global Income Opportunities Fund Inc. (BWG) is finally showing some discount closure tightening by 1.4% on the week. As did PGIM Global High Yield Fund (GHY), which was one of our latest buy recommendations overall. Nuveen Real Asset Income & Growth Fund (JRI), a fund I've been discussing off-and-on, recently saw its discount contract again. I now have a fairly overweight position in this one. It is going to correlate to the infrastructure/cyclicals/energy trades along with real estate.

Also this week, we had the votes for two RiverNorth funds about open-ending (meaning converting to a mutual fund). RiverNorth/DoubleLine Strategic Opportunity Fund (OPP) and RiverNorth Opportunities Fund (RIV) both asked shareholders if they wanted to convert to a regular fund but both shareholder bases rejected the idea. I had noted this was a very low probability of passing since the funds were A) at a decent premium and the investors get back NAV creating a loss, and B) not in the best interest of RiverNorth who still holds some of the shares in their own funds.

Invesco released some of the details of the tender offer and reorganization of Invesco Credit Opportunities Fund (VTA). The fund will be converting to an interval fund, which is kind of a hybrid between an open-end mutual fund and a closed-end fund. You can buy (purchase new shares) every day but you can only sell on specific dates allowing the fund to buy less liquid securities while bringing in new assets.

The tender offer will be for up to 12.6mm shares or 20% of the outstanding. This is a sweetener to vote for the conversion of the fund. I would expect about 40-45% of your shares to be lifted if you tender all your shares. The question, is, should you a) buy shares here at a -6.5% discount, and b) tender?

I actually took a flyer and bought a bit here just to see what happens. The key question is how to model the remaining non-tendered shares. If you get 45% of your shares lifted in the tender, that leaves 55% moving into an interval fund format. You can then only sell quarterly and only a specified number of total shares (at the fund level) can be tendered. While we don't have that number, my guess would be 5%. That means if enough shareholders put in sell orders that the total shares wanting to be sold is greater than 5%, you only will have a pro-rata amount sold.

Since a lot of investors play tenders, I can imagine many attempting to tender their shares and then sell in the first window as an interval fund. But many investors will be doing that meaning it could take several quarters to get out. That's the conundrum here.

Have discounts peaked? NAVs continue to power higher though at a decreasing rate (last week actually reversed the trend with a stronger move up). Below is a chart of NAVs and price ("Pr") returns for the last ten days and the subsequent discount return.

You can see that the NAV returns are mostly higher with only munis down over that time period. But discount returns have a lot of negative signs in front of them showing that prices have lagged the upward move of NAVs.

This happens often as investors (across all markets) see more worries and thus, "don't believe the NAV moves." The worry can also be quantified via the discount. The greater the worries that abound, the wider the typical discount. 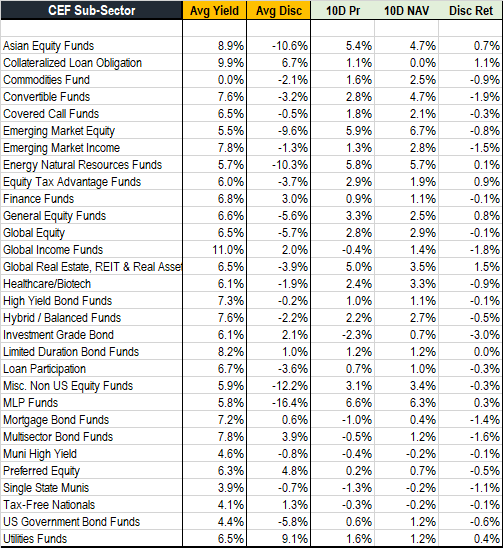 We had distribution announcement day on Wednesday and there were really no surprises. Even the PIMCO cuts were not of a surprise if you have been reading my comments on them the last three months. There is no doubt that I believe PIMCO Dynamic Income Fund (PDI) will cut its distribution - once they merge in PIMCO Income Opportunity Fund (PKO) and PIMCO Dynamic Credit and Mortgage Income Fund (PCI) later this year. This is clearly a sign that it is coming.

I've noted that PIMCO Dynamic Income Opportunities Fund (PDO) is the same fund as PDI, just newer. And the distribution is based on today's rates and investing environment. When PDI was launched in late '12, the distribution rate could be much higher as the yields garnered on securities were still down from the Financial Crisis.

We will discuss this in more depth in a separate article along with what to anticipate and a course of action for PDI.

The cuts to the MFS muni high yields are also something to watch. Not only are we seeing some weakness in muni NAVs (mostly because rates have inched back into the 1.30s) but distribution cuts are creeping in now too. This, unfortunately, is likely to be the case for some time as yields continue to move lower and gains from lower leverage costs are finished. The MFS funds, who micro-adjust each month, can be thought of as canaries in the coal mine for other high yield muni funds and their eventual trims to the distribution.

Lastly, Ivy High Income Opportunities Fund (IVH) cut for the fourth time this year. The total cuts amount to 2 cents per share per month or approximately 22.2% in lower income. The new yield will be just 5.98%. For a fund with 56% in single B and 32% in CCC, there is no reason for them to be paying such a low yield.

I'm not sure what is going on there as most other high yield bond funds have not cut by that much, or cut at all. I have some feelers out to the company for some possible color so I'll keep you posted. For now, avoid it. 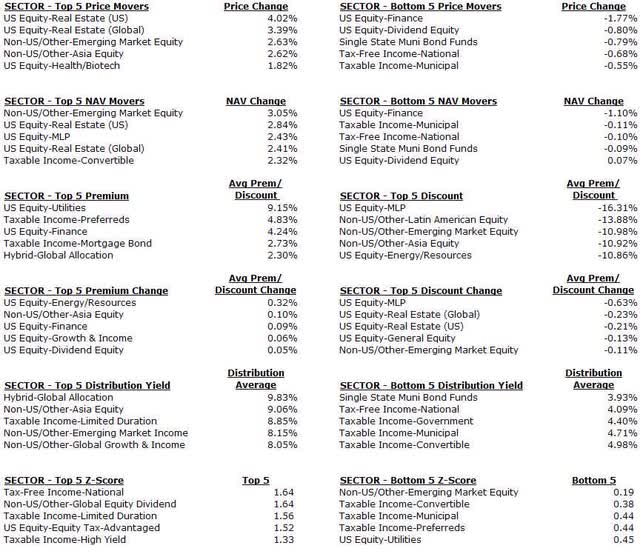 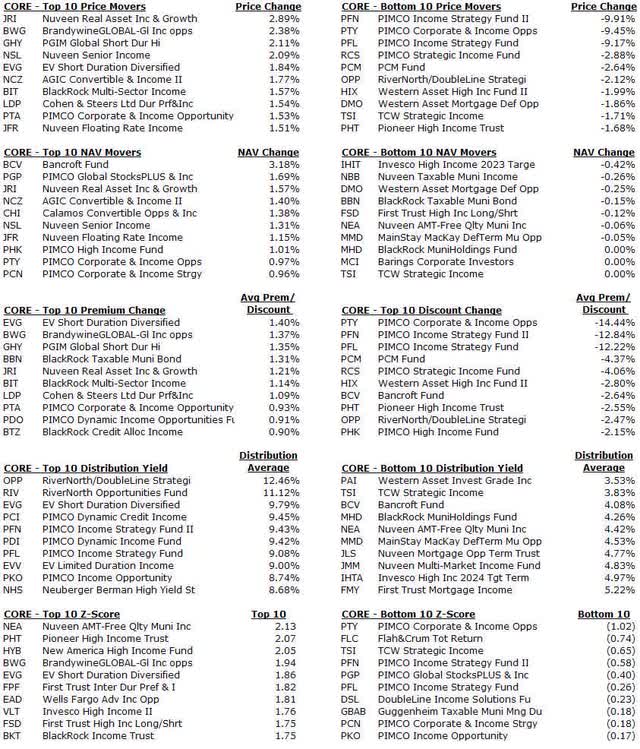 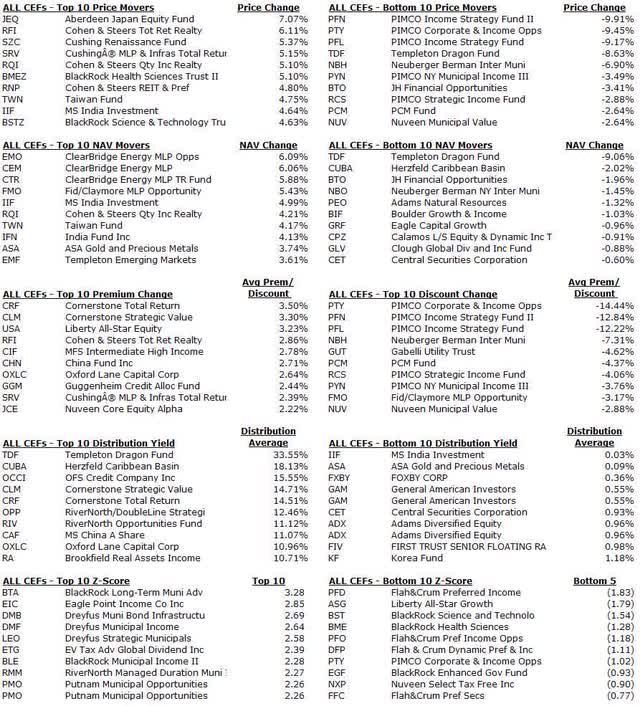 Disclosure: I/we have a beneficial long position in the shares of PDO, PFN either through stock ownership, options, or other derivatives. I wrote this article myself, and it expresses my own opinions. I am not receiving compensation for it (other than from Seeking Alpha). I have no business relationship with any company whose stock is mentioned in this article.