Endesa (OTCPK:ELEZF) is a stock that we picked up thanks to its robust dividend and its relatively low multiple. In particular, we liked that the situation with nuclear means at least another 10 years of facility operation giving the assets more than enough time to pay back the provision book value on those assets twice over. However, while the regulated business is for now untouched given passed tariff review periods, the bigger concern is now the 'liberalised' business, which is appearing less and less liberal. Indeed, the CNMC (the Spanish regulatory agency for independent competition) and general left-leaning sentiment in Spain remains a problem for all Spanish exposed utilities including Iberdrola (OTCPK:IBDSF), but Endesa is going to be hit particularly hard in very recent developments that target utility companies for the sake of protecting consumers suffering from rapidly increasing prices. Overall, we go neutral on Endesa, however, we happily hold the position as we see this cloud passing in a year or two.

The Spanish 'shock' plan is focused on dealing with the fact that electricity bills are rising substantially for Spanish consumers. Endesa had already pointed out that there were substantial increases in their H1 2021 report. 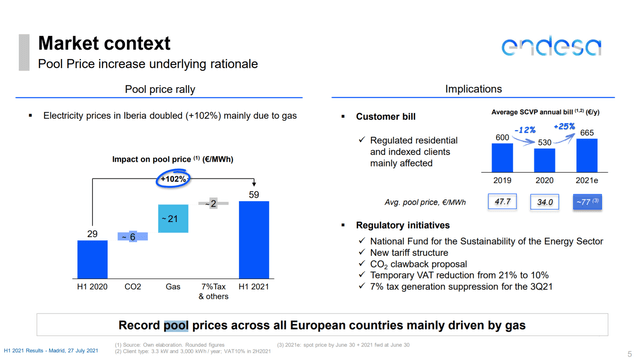 At the moment, Endesa had not been benefiting from this increase in prices as they were hedged at much lower pool price levels. Indeed, like-for-like EBITDA is more or less in line with 2020, removing some non-recurrent provision effects. 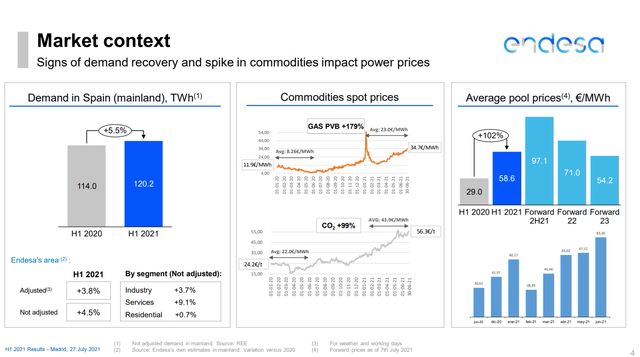 Instead of benefiting from the increasing forward prices that are presenting in the future years, however, all the potentially extraordinary income, driven primarily by increases in gas prices, will not come to fruition. The Spanish government will, among other things, essentially be capping the extraordinary income that could be generated in the liberalized business. Thankfully, Endesa wasn't particularly benefiting as of now, but the impact to EBITDA could be substantial. Given the commitment of the left-leaning government to limit the price increases to only inflation-equivalent increases relative to 2018 levels, we should expect that prices should average somewhere between the current H1 2021 and the H1 2020 levels. The effect could amount to about 20% in the liberalised business, and could reasonably affect EBITDA by about 10% overall. There is no reason to expect meaningful declines in volumes as projects continue to be on track. 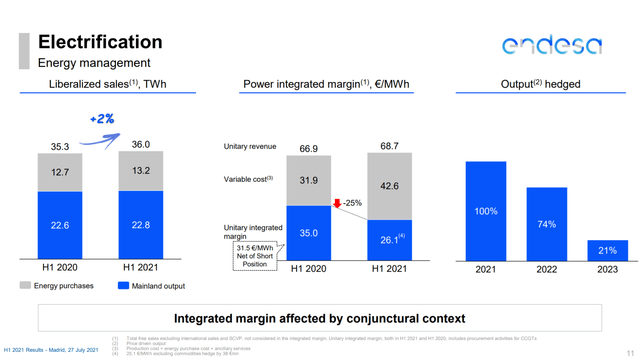 What About the Dividend?

It's hard to say exactly what will happen to the dividend as the regulatory conditions could encourage a more substantial cut from the current +10% yield based on the July 2021 payout. Some cut should be expected, as this year's dividend even affected the debt position of the company.

In the past, the EBITDA to FCF conversion rate has been relatively stable at around 25%. Given a 10% decline in EBITDA, we should expect a similarly limited impact on FCF as the cash flows normalise throughout the year. 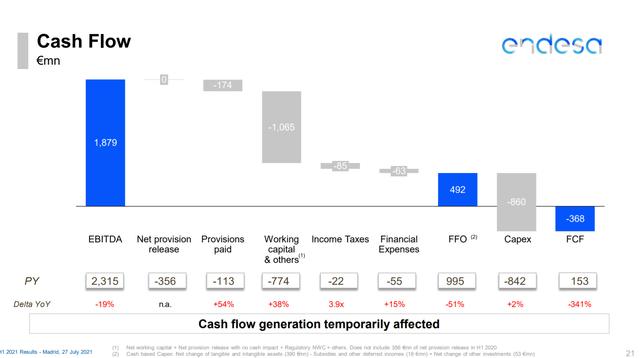 Leverage doesn't pose a major issue as the ratio lies at less than 2x on rather stable income, especially from the regulated business where tariff reviews have already recently passed. However, we are currently seeing quite substantial working capital effects, and this is because of collection delays that also form part of the Spanish government's ongoing efforts to protect consumers. There is an expectation that almost half of the accounts receivables should be recoverable in the next couple of months, but some could become bad debt if pressure on Spanish households is serious enough. However, we do not think the overall effect will be persistent by the end of the year. As such, the dividend at 2015 levels should remain coverable in the FY figures, which at current prices would still equate to a dividend yield around 6%.

The risks to the company are clear. The Spanish government is not afraid to ruin the party for shareholders. Moreover, the dividend at the ballooned 2020 levels, which was already 33% above 2019, is not going to be sustainable. The dividend yield will likely decline to 6-7% from the current 11%. However, we are still happy with the valuation, and we are also confident that the effects of the shock plan, while important, are not going to permanently impair the holding. For now, we are going to hold the stock on the basis of the stable regulatory revenue, and on the basis that their nuclear assets still appear to be undervalued on the basis of the provision book values, which imply residual value in the nuclear assets.

Valkyrie Trading Society
3.13K Followers
Author of The Value Lab
A long-only voice with eclipsing growth through 2020 and 2022 bear markets.

Disclosure: I/we have a beneficial long position in the shares of ENDESA either through stock ownership, options, or other derivatives. I wrote this article myself, and it expresses my own opinions. I am not receiving compensation for it (other than from Seeking Alpha). I have no business relationship with any company whose stock is mentioned in this article.