The First Trust Water ETF (NYSEARCA:FIW) has an excellent, long-term performance track record and is ideally positioned to benefit from the challenges the world faces in meeting the demand for clean water. Strong global demand for clean-water is driven by a growing population, economic development, pollution, and a reduction of water resources as a result of global warming. FIW carries a 5-star Morningstar rating, is fairly well-diversified across a number of various sectors, and has an excellent long-term future due to potable water scarcity. And that is exactly why I own it - and over the past 12 months, the FIW ETF has outperformed the S&P 500 by 10%+. 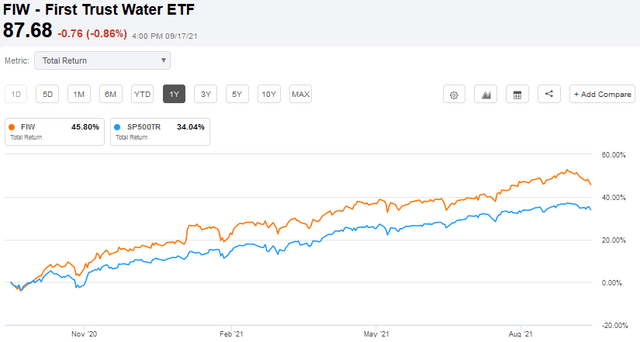 As pointed out in the United World Water Report of 2021, water is an "infinitely valuable" commodity because without it, life would simply cease to exist. Yet water is typically taken for granted. Consider that an estimated 80% of the water used in all industrial and municipal operations is released back into the environment without being treated. That, despite that fact that:

... fresh water is in fact scarce, and becoming scarcer. Over 2 billion people already live in areas subject to water stress. Some 3.4 billion people, 45% of the global population, lack access to safely managed sanitation facilities. According to independent assessments, the world will face a global water deficit of 40% by 2030. This situation will be worsened by global challenges such as COVID-19 and climate change.

The investment thesis for the FIW Water ETF is as simple as that. So let's take a closer look at the FIW fund to see how it has positioned investors for success.

The top-10 holdings in the First Trust Water ETF are shown below and equate to what I consider to be a moderately concentrated 43% of the entire portfolio: 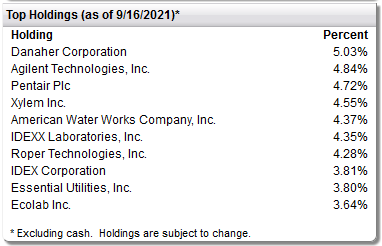 The #1 holding with a 5% weight is Danaher (DHR). Danaher is a global supplier of medical, commercial, and industrial products and services. These include technology for the separation, filtration, and purification of water (and other liquids). Seeking Alpha contributor Stephen Simpson says Danaher's Growth Machine Keeps On Roaring. DHR is up 56% over the past year and with a forward P/E = 34.3x currently trades at a fairly rich valuation.

Pentair PLC (PNR) is the #3 holding with a 4.7% weight. Pentair provides smart water solutions for both consumers and industry. Pentair's Q2 report was a beat on both the top and bottom lines as revenue jumped 32% yoy. Last week, Pentair announced it was buying Pleatco for $255 million in cash. Pleatco makes water filtration and clean-air solutions for pool, spa, and industrial customers. PNR is up 64% over the past year and currently yields 1.1% while trading at a forward P/E=22.5x.

The #5 holding is American Water Works (AWK) with a 4.4% weight. AWK provides water and wastewater services to ~1,700 communities across 16 states serving ~3.5 million customers. Being a utility-like company, one might expect it to have a higher yield (currently $2.41/share for a 1.35% yield), but the stock price keeps out pacing dividend increases. Argus recently upgraded AWK to Buy because it thinks the company deserves a higher multiple "based on its skill as an acquirer of municipal utilities, strong regulated businesses and history of dividend increases."

Ecolab (ECL) rounds out the top-10 holdings with a 3.6% weight. As of December last year, Ecolab was the 7th largest holding (3.9%) of the Bill and Melinda Gates foundation. Ecolab has been an underperformer this year (up only 5.2%), but is up 86% over the past 5 years. Ecolab has suffered recently due to both the Texas Freeze and hurricane Ida, which - combined - have cost the company an estimated $0.30/share.

As mentioned earlier, due to the nature of this water fund, it is nicely diversified across a number of sectors, but its primarily weight is in the industrial sector:

The chart below compares the FIW ETF to the major market indexes S&P 500 (SPY), Dow Jones Industrials (DIA), and the Nasdaq 100 (QQQ) over the past year:

As can be seen, the FIW ETF has outperformed them all.

As can be seen, even though FIW has trailed the index it tracks (likely due to the fact that it is only re-balanced twice a year), the 16.8% average annual return over the past 10 years is excellent.

The following metrics were taken directly from the First Trust FIW ETF Webpage:

As can be seen, at only $1.3 billion in AUM, FIW is not a big fund - but it is large enough not to pose any liquidity concerns. The 0.54% expense ratio is a bit stiff considering the portfolio consists of only 36 companies and is only re-balanced semi-annually (investors might expect a quarterly rebalance given that fee level). The yield is somewhat disappointing, but indicates that the primary investment theme here is capital appreciation - not income.

Somewhat surprising to me is that the FIX fund is valued - from a P/E and Price/Book perspective - quite similar to that of the S&P 500. That is likely because water scarcity has become a fairly high-profile issue these days and ESG concerns and water sustainability has likely attracted many investors.

I see little risk as far as the long-term thesis here: demand for potable water is going to keep growing as long as man inhabits the Earth. Global warming is a positive catalyst in my opinion (not for man, but for the FIW ETF).

The biggest risk is that the overall market is still very near all-time highs and any big market sell-off would certainly hit FIW shares as well. Higher interest rates are typically a threat to utility-like investments - and, as pointed out earlier, the yield of FIW will not provide much support. That being the case, investors who want to build a position in FIW should consider scaling in slowly over time so as not to go "all-in" near the market top and to take advantage of market volatility.

The First Trust Water ETF is an excellent long-term holding in my opinion. The simple and global water supply/demand fundamentals supporting the companies in the fund are strong and will likely only improve going forward. While the fund doesn't really offer "value" as compared to the S&P 500, I suspect it will continue to outperform the overall market as more and more investors allocate capital to sustainable long-term investment opportunities - and clean water is certainly at or near the top of the list.

FIW is a BUY (but as mentioned, scale-in over time).

Michael Fitzsimmons
19.13K Followers
Technology stocks, ETFs, portfolio strategy, renewable energy, and O&G companies. Primary goal is growing net-worth. I typically allocate a portion of my own portfolio and devote some of my SA articles to small and medium sized companies offering compelling risk/reward propositions. I am an Electronics Engineer, not a qualified investment advisor. While the information and data presented in my articles are obtained from company documents and/or sources believed to be reliable, they have not been independently verified. Therefore, I cannot guarantee its accuracy. I advise investors conduct their own research and due-diligence and to consult a qualified investment advisor. I explicitly disclaim any liability that may arise from investment decisions you make based on my articles. Thanks for reading and I wish you much investment success!

Disclosure: I/we have a beneficial long position in the shares of FIW SPY DIA QQQ either through stock ownership, options, or other derivatives. I wrote this article myself, and it expresses my own opinions. I am not receiving compensation for it (other than from Seeking Alpha). I have no business relationship with any company whose stock is mentioned in this article.