On the surface, the iShares China Large-Cap ETF (NYSEARCA:FXI) and the X-trackers Harvest CSI 300 China A-Shares ETF (NYSEARCA:ASHR) might seem quite similar. After all, both tend to track large Chinese corporations.

The FXI ETF tracks the FTSE China 50 Index, composed of:

50 of the largest and most liquid Chinese stocks (H Shares, Red Chips and P Chips) listed and trading on the Hong Kong Exchange (HKEx)

While the ASHR ETF tracks the CSI 300 Index, which:

Consists of the 300 largest and most liquid A-share stocks. The Index aims to reflect the overall performance of China A-share market.

The largest Chinese companies tend to be listed both in Shanghai and Hong Kong. Since the largest of these companies will also tend to have the biggest weights in their respective indexes, we can reasonably expect that FXI and ASHR will track each other reasonably closely. And they did, indeed, track reasonably close. Until, that is, something strange happened - ASHR started outperforming FXI substantially. Check the chart below: 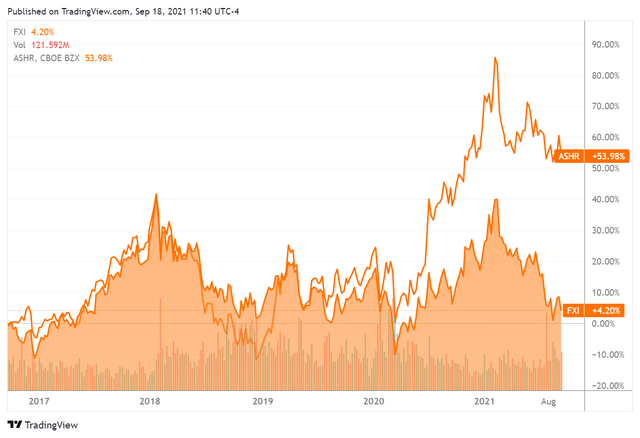 It seems that since early 2019, started ASHR outperforming FXI heavily. One wonders what happened here.

The reason, to a large extent, was that Chinese stocks which traded simultaneously in Hong Kong (H-Shares, on which FXI invests) and in Shanghai (A-Shares, on which ASHR invests) often traded for very different prices.

measures the absolute price premium (or discount) of A shares over H shares for the largest and most liquid mainland China companies with both A-share and H-share listings ("AH Companies").

How has this index been behaving? As follows: 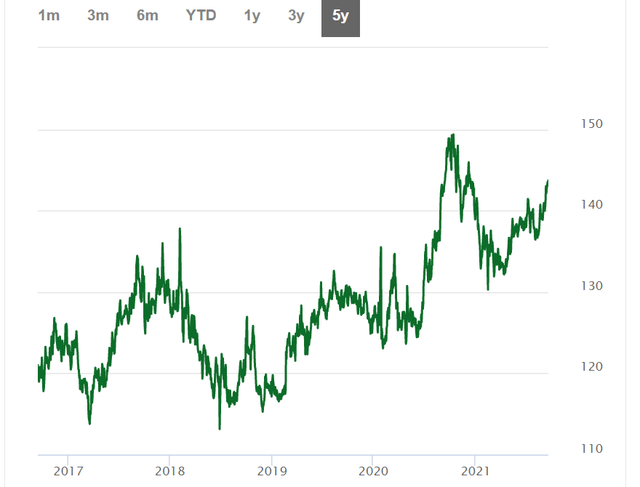 In earlier years (not shown), A- and H- stocks tended to trade in line with each other. However, starting in 2016 or so, strange things started happening. The A-Shares (Shanghai) started to often trade at a premium. And indeed, in 2019, the premium had quite an explosion already.

What happened recently is that the latest premium explosion went even further. From a premium of around 15% (A-Shares 15% more expensive than the exact same shares in Hong Kong), the premium blew all the way to 50% (150 Index), and now sits at 43.7% (143.7). Indeed, counting today, it sits at 49.4%, but Shanghai wasn't open (while Hong Kong was and crashed by more than 3%), so this isn't accurate.

Just imagine what this means. A basket of the largest most liquid Chinese companies with simultaneous quotes in Hong Kong and Shanghai trades on average 43.7% more expensively in Shanghai.

This can happen because A-Shares and H-Shares are not convertible into each other, even though they grant the same economic rights. So, as market demand and supply ebbs and flows, the greater mainland enthusiasm together with Hong Kong skepticism is creating a huge valuation gulf between the two markets. Recently, the implosion of real estate developers (which trade mostly in Hong Kong), due to Evergrande (OTCPK:EGRNF) (OTCPK:EGRNY) (the largest Chinese developer) approaching default, made the relative mood sour still.

Moreover, up above we're only talking about an average. At the single stock level, even for large companies, things can get truly incredible. For instance, China Telecom (CHA) is now listed in both markets. In Hong Kong, the stock goes for HKD 2.62 (x100, that's $33.67). The same China Telecom stock, in Shanghai, trades for RMB 4.53 (x100, that's $70.02). In other words, China Telecom in Shanghai trades at a 108% premium to the same stock in Hong Kong. More than double the price. For a liquid stock.

This happens over lots of other simultaneously quoted stocks. And obviously, the demand and sentiment producing this strange outcome will affect stocks that don't have double listings, either. Thus, where there are no direct comparables, Shanghai stocks can be expected to be more expensive than Hong Kong stocks.

In short, this premium having gotten so huge recently is the main reason ASHR has outperformed FXI so massively recently.

Of course, looking ahead, this reality will probably change. There are already systems that allow limited investment by mainlanders in Hong Kong. And sooner or later, systems will be put in place that allow greater and greater freedom, until such discrepancies will cease to exist.

Since the Hong Kong market is demonstrably (where the stocks are the same) trading at a large discount to Shanghai, the question might also arise on whether it's also cheap in absolute terms.

We can try to answer this question by looking at the market's overall multiples. One problem presents itself. The currently available multiples for Hong Kong are deeply distorted by the Covid-19 epidemic.

Hence, betting on the whole index seems risky, although the index itself carried a low multiple before both Covid-19 and the Evergrande collapse. But in such a negative environment where similar stocks trade for very large discounts to their Shanghai listings, it's inevitable that bargains must be hidden in there, pressured by the overall market.

The extreme Shanghai premium can enable a pairs trade. This trade would be structured as follows:

A narrowing of the Shanghai premium is very likely to make this trade work (since ASHR is exposed to Shanghai and FXI is exposed to Hong Kong and many components will just be the same at very different prices - plus the overall sentiments should converge even for different stocks).

There are several investor implications to be drawn from this phenomenon:

Idea Generator has beaten the S&P 500 by around 11% since inception (in May 2015). There is a no-risk, free, 14-day trial available for those wanting to check out the service.

Additional disclosure: I might take positions on ASHR and FXI in the next 72 hours.