Levi's (NYSE:LEVI) investors have been on a roller coaster ride, with shares trading much higher and much lower than its IPO price of $17. They are now closer to the top of the range, so we will analyze if they are still a good buy, or at least a hold.

Revenue has started recovering after a huge collapse during the Covid lockdown period. The trailing-twelve-month revenue is now exceeding $5 billion. For comparison, the company's market cap is a little over $10 billion, so it is trading at a P/S ratio of ~2x.

We believe Levi's has two main competitive advantages versus other retailers. One is its massive distribution channel, and the other is the power of its brand, which is extremely well known and trusted. The Levi’s brand has the highest brand awareness in the denim bottoms category globally and is the #1 brand globally in jeanswear (measured by total retail sales).

With respect to the distribution channel advantage, one is its website, which is one of the most visited in the world, with Alexa ranking it the #2,436 most visited website in the US. It also has considerable visits from Canada and Russia. The website accounts for roughly 4% of sales, but it is the fastest-growing channel. 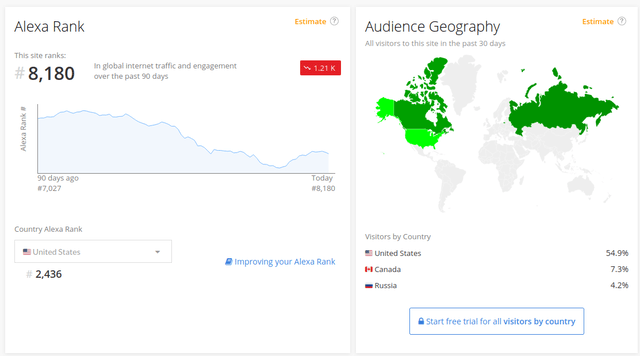 The second component of its powerful distribution channel is its stores where Levi's sells directly to customers, capturing the customer relationship and controlling the shopping experience. Levi's also sells wholesale and has strategic relationships with the likes of Macy's (M), Nordstrom (JWN), Target (TGT), Amazon (AMZN), Tmall, and Walmart (WMT).

The sales breakdown by channel is shown in the graph below. Wholesale still accounts for the majority of sales, but the DTC component is significant and a valuable competitive advantage versus other brands. The DTC business has grown from 29% of net revenues in 2015 to over 37% of net revenues today. 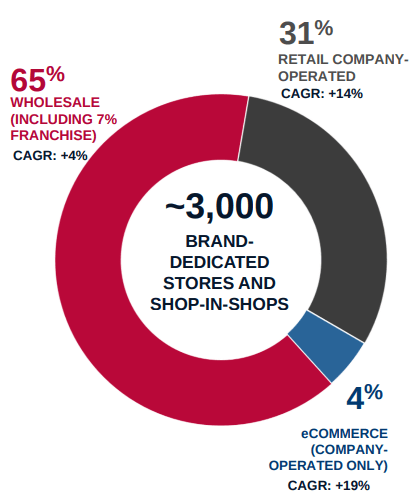 The power of the brand and the distribution channel can be seen in the superior margins the company has. For example, it has a gross margin of ~57%, while the average for the industry is ~49%. Similarly operating margins are roughly 2x those of the apparel industry.

These superior margins translate into attractive returns on equity and returns on capital invested, which are the main signs that a company has a competitive 'moat' and it operates a superior business. The return on equity at ~22% is quite good compared to the industry average which is negative.

Shares are currently trading at a P/S ratio of ~2x, and have in the past traded as low as 0.8x times sales during the Covid crisis panic.

The P/E ratio might seem elevated at ~34x, but it is due to some quarters having had a Covid impact. It is better to look at analyst estimates for the coming years, which we will do by checking the section on Seeking Alpha that compiles these estimates.

Based on analyst estimates for the upcoming year shares are trading at a reasonable forward P/E of 18x, and 14x if we base it on expected earnings for the fiscal year ending in November 2023. Compared to the general market shares actually seem like a good value, even if they are not the bargain they were a year ago.

Levi's undoubtedly has a powerful brand and distribution channels that allow it to have better profitability and margins compared to the industry averages. Shares are no longer a bargain, but they appear reasonably valued at a P/S ratio of ~2x and a forward P/E ratio of ~18x. We think shares are a 'hold' at current prices, and would become significantly more interested in buying should there be a pullback in the share price.

Additional disclosure: The information contained herein is for informational purposes only. Nothing in this article should be taken as a solicitation to purchase or sell securities. Before buying or selling shares, you should do your own research and reach your own conclusion, or consult a financial advisor. Investing includes risks, including loss of principal.