The stock market had a brief scare on Monday, with the Dow Jones Industrial Index (DJIA) plunging 900 points intraday and the big three indices breaking major trend lines. The Fed came out on Wednesday to calm the market with its ever-dovish comments, and investors resumed buying. Markets spent the remainder of the week recovering, albeit on weak volume.

Fundamentals of the market have been deteriorating for months but as I have written before, bull market behaviors can be analogous to fracture mechanics in materials. Cracks can exist in a material until an incremental load pushes it over the edge and the energy releases itself in the form of propagation, and the system collapses. This is analogous to the stress buildup in markets and we are currently in the “necking” phase. 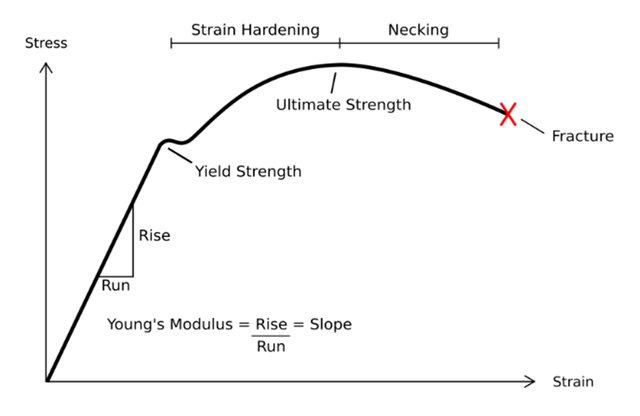 Since the fundamentals are still strong and sentiment is a bit mixed at the moment, I look at technical clues from multiple asset classes to help navigate the current market. 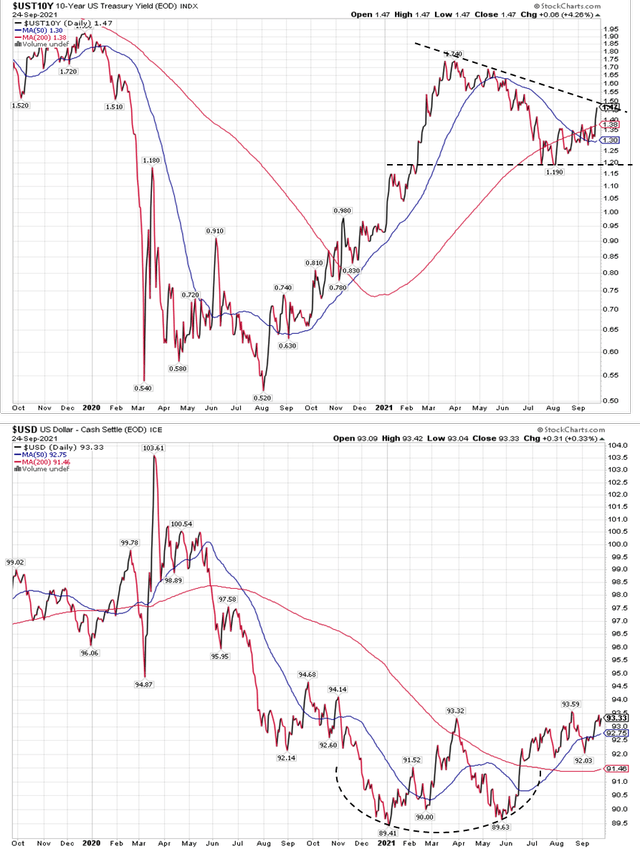 A potential breakout of the 10-year Treasury bond yield from its 6-month downtrend this week is being set up on the chart. Investors seem to have finally reckoned with the reality of tapering. Although not necessarily messy, the repricing of all asset classes will happen at some point. And that some point is a mere few months away. Given the forward-looking nature of the market, this abrupt rise of interest rates can be self-reinforcing and thus become an inflection point. The virtuous cycle of low rates reinforcing high valuation can switch into reverse.

US dollar, often correlated to interest rates, has shown some resilience since the double-bottom in 1H21. Since August, it has been trending alongside Treasury yield in a consolidation uptrend around the 50D moving average. Now in the face of higher rates and troubles in the emerging markets, money is flowing back to the US (and Europe to some extent) where vaccination rate is high and growth is still robust. A strengthening dollar can depress the commodity complex and check the valuation of the stock markets. 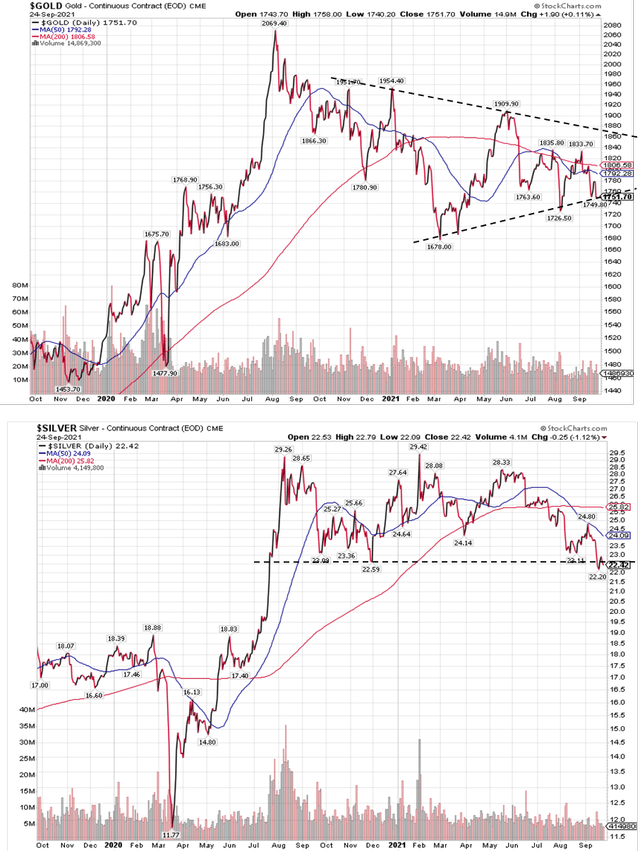 Next, look at precious metals. Gold has spent 2021 in the doldrums, moving in what can be considered a “bull pennant” continuation pattern waiting for a catalyst to break out. Gold’s story is complex as it tends to gain on low interest rates, high safe haven demand, and high inflation. Right now the rising rates is cancelling out the inflation hedge, so the next move could hinge on whether the market goes “risk-off”. If rates explode higher, gold is likely to crash from here; if the equity market crashes, then gold could explode higher.

Silver, gold’s poor cousin, has widespread industrial use, so the story is more nuanced. Judging from the technical picture, it is at a high risk of further breakdown below its yearlong consolidation band. The indecision from its precious metal appeal and its ties to the industrial metal complex has likely caused its weakness. One can see this more clearly on the chart of platinum, which has been a leading indicator of silver. 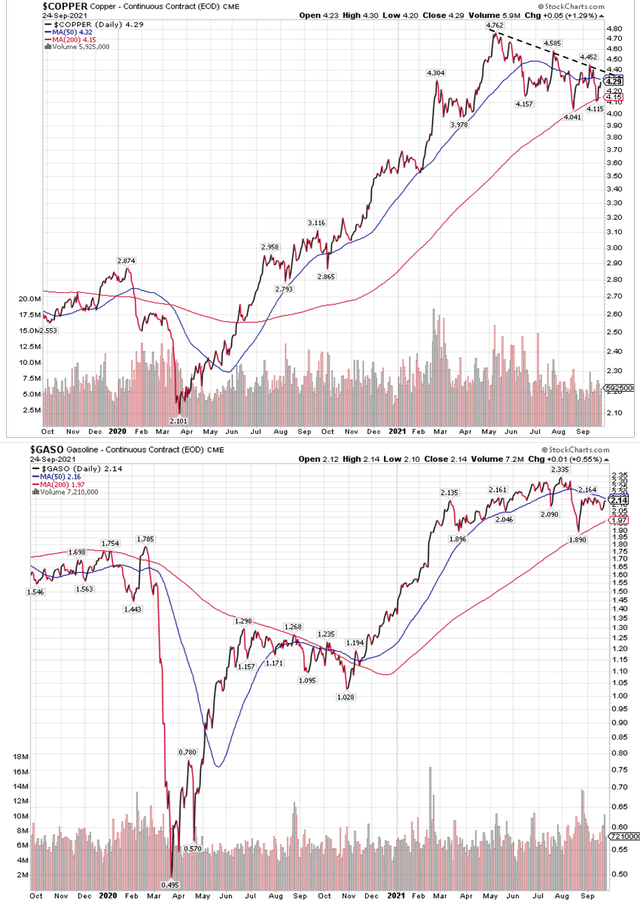 Copper and gasoline are also exhibiting near-term weakness. The post-pandemic commodity bull cycle is not over as capital investment including infrastructure around the world is still in early stages. However, the technical price actions and seasonality are headwinds toward the last months of 2021. Commodity crackdown from China to curb inflation has had negative repercussions on commodities ranging from iron ore to soybean. Rising yield and US dollar, central bank tapering, slower economic/job growth, and coming flu/COVID pickup in the northern hemisphere are now reflected on the downward trending patterns. While still bullish over the medium term, it is time to curb the enthusiasm for now. 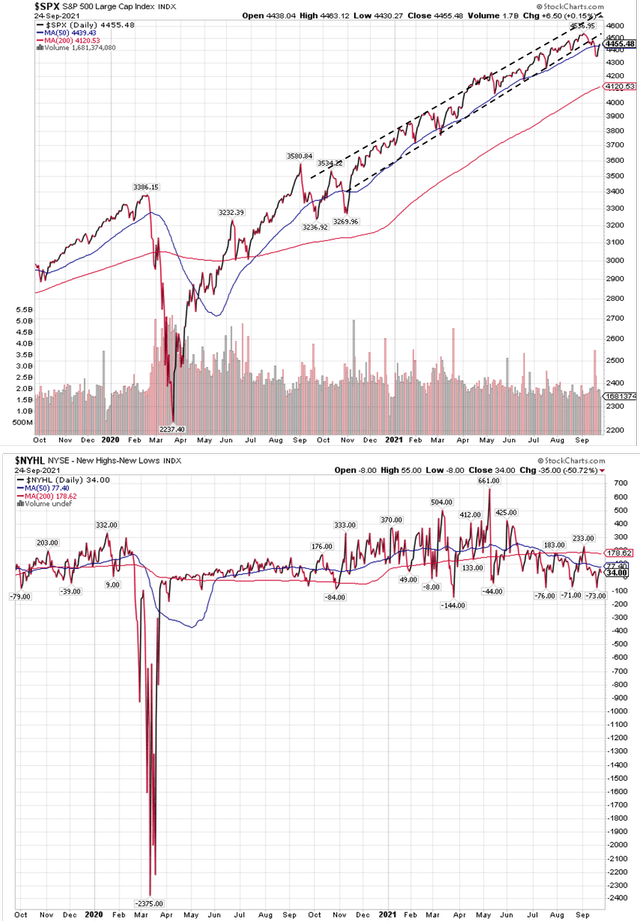 S&P 500 index’s impressive run was met with a breaking of trend this week. Although the recent 5% intraday correction was swiftly reversed, it was done on weak volume. We are also knee-deep in the historically volatile months of September/October. While seasonality and weak returns are mere correlations, it weighs on the sentiment and money flow from institutions. Whether it foretells the timing of a serious correction is a fool’s game, it should not be cast aside by even the most rational investors/traders. This is especially ominous when viewed in conjunction with the slowly deteriorating market breadth. New highs vs. new lows have been trending lower for months, indicating a slow erosion of participation in the bull run. In addition, there are only approximately 50% of members in the S&P 500, Nasdaq, and Russell 2000 that are currently trading above their 50D moving averages. These are not signs of strength in a relentlessly rising overall market. 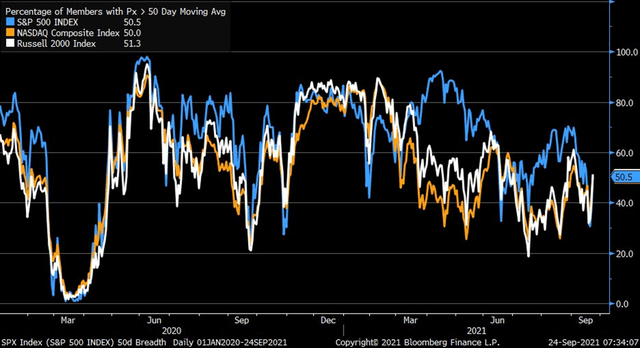 Finally, after a quick spike on Monday, the VIX index plunged quickly this week back to the range in which it spent most of 2021. With vulnerability of the overall risk-on sentiment rising, the complacency indicated by this is worrisome. 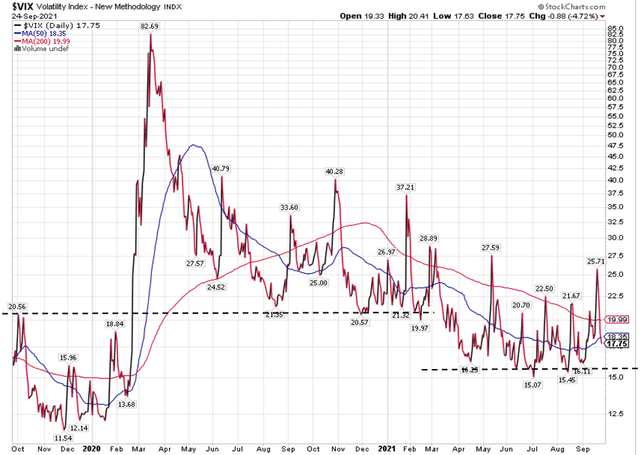 There have been plenty of naysayers in this market throughout the entire post-pandemic bull market. While I believe the liquidity and fiscal/monetary stimulus injected by central banks around the world will feed asset appreciation and stock market boom for the foreseeable future, the wind appears to be changing. It is prudent now to hit the pause button and sit out the storm that is gathering.

Jeff Lee
394 Followers
Macro trader and newsletter writer. I call myself "The Amateur" trader. An Amateur at one point in history - an era before industrialization pushed us all to become a specialist in our field, was one who pursued knowledge and wisdom across domains, and mastered one or a few crafts in his day. Some were polymaths; some were aristocrats who didn't work for a living. I am neither. But I have always followed my intellectual curiosity to understand how the real world works. In order to do that, I study history, politics, economics, technology, psychology, religions, in addition to my training as an engineer.In my 20+ years of trading I had lost money consistently for the first decade and a half, sometimes my entire stake. Along the way I have accumulated 10,000 hours of intentional practice and distilled many lessons. I write about market events, macro trends, trading psychology, handling emotions, finding one’s edge, market regimes, similarity with poker, decision making, machine learning in trading, self-sabotage, risk asymmetry, position sizing, fundamental/technical analysis, reading market sentiment, commodities and currencies.Trading is my calling. And I believe most can benefit from my journey. If you like my materials please share them and follow me. I need to get 500 followers to start a dedicated newsletter on SA.You can find my other work elsewhere. Follow me here:https://www.getrevue.co/profile/traderJ/membershttps://amateurtraderj.substack.com/

Disclosure: I/we have a beneficial long position in the shares of VIX either through stock ownership, options, or other derivatives. I wrote this article myself, and it expresses my own opinions. I am not receiving compensation for it (other than from Seeking Alpha). I have no business relationship with any company whose stock is mentioned in this article.