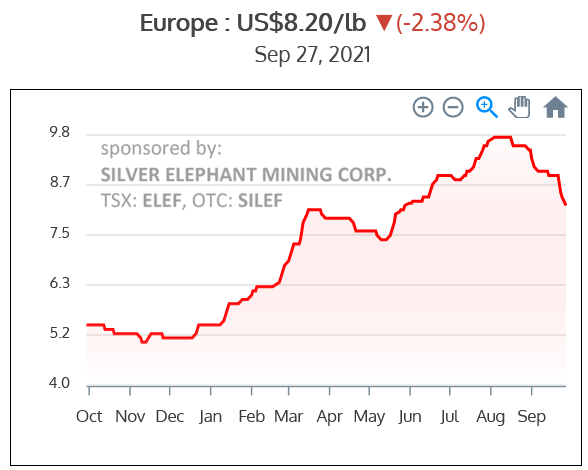 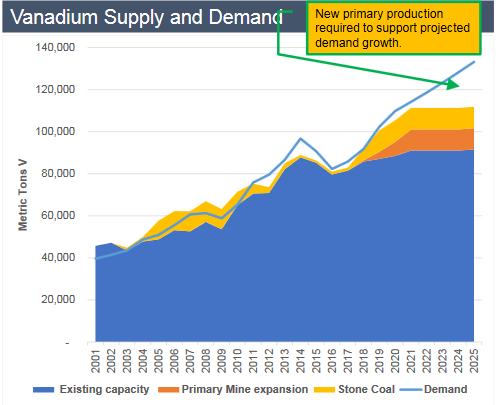 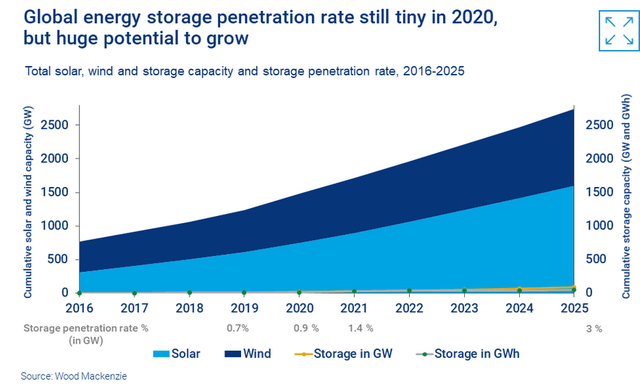 On September 1 PRNewswire reported (from Research and Markets):

Global Vanadium Ore Market Report 2021: Market is expected to reach $2.36 Billion in 2025 at a CAGR of 10.2%... The use of vanadium redox flow batteries (VRFB's) for energy storage is an emerging trend market. This trend will drive a structural change in the vanadium ore mining market dominated by steel manufacturers... Use of vanadium alloy for manufacturing automobile parts will reduce their weight and increases their fuel efficiency. According to an investing firm (aheadoftheherd.com), around 85% of all automobiles will incorporate vanadium alloy to reduce their weight, thereby increasing their fuel efficiency by 2025.

A Review of Vanadium's market performance for first half of 2021... The steel sector is the primary consumer of vanadium as mentioned above. Throughout the first half of 2021, vanadium demand from the rest of the world worked to catch up with China. Erik Sardain, an analyst at Roskill, explains that one of the main reasons that demand for the metal in the rest of the world lagged behind was because most economies were more exposed to the chemical and aerospace industries. China's economy is focused more on construction and infrastructure. Sardain expects demand from the steel sector to remain strong in China throughout the second half of 2021, while vanadium demand in the rest of the world also continues to grow steadily... CRU Group's Willis Thomas also expects that as more conversations and announcements surrounding the battery segment occur, the demand for vanadium will increase... Sardain expects vanadium prices in the second half of 2021 to remain at present levels and forecasts that vanadium pentoxide in Europe will average $8.10 per pound.

AMG Advanced Metallurgical Group N.V. announces the construction of its first Lithium Vanadium Battery for Industrial Power Management Applications... AMG has developed an alternative concept in the form of a large scale "hybrid" lithium vanadium redox flow battery ("LIVA") which avoids CO2 emissions. The lithium part of the new battery design enables fast discharging including black start abilities. The lithium battery is then recharged by the low-cost vanadium battery which in turn is charged by the grid... The first LIVA system will be installed in one of AMG's German manufacturing plants and is scheduled to go online in the first quarter of 2022. Engineering has started for three more systems, two in Germany and one in the US.

Electrolyte patent received and proving trials started with Fraunhofer Institute for Chemical Technology... [The] Kazakhstan patent for the efficient technology which it has developed to produce electrolyte for vanadium flow batteries ('VFBs') directly from ammonium metavanadate ('AMV'), a precursor form of vanadium from which vanadium pentoxide is usually made. The Company has also signed an agreement with Fraunhofer Institute for Chemical Technology, an institute in Germany that is well-known for its research work on VFBs and electrolyte technology, for testing of the Company's electrolyte for battery purposes. Samples have been shipped and work is expected to commence on 15 September 2021.

Start of production of ferro-molybdenum and vanadium pentoxide. Nick Bridgen, CEO, commented: "This low cost, revenue-generating step completes our current product line-up and allows us to extract the maximum value of the vanadium and molybdenum from our raw-materials. Together with our low Kazakhstan operating costs, this enables us to be amongst the most efficient producers of vanadium from secondary raw materials. We look forward to the addition of the electric arc furnace which will complete our plans for the existing plant, the earnings from which will contribute to the ongoing development of the main Balasausqandiq project."

No news for the month. On August 3, 2021 the Company reported that activities had re-started at the Sunday Mine Complex stating:

The team has completed its first three weeks on the resumption of mining activities at the Sunday Mine Complex... Following development activities, limited ore production from this target area is anticipated.

Detailed assessment of alternative sites completed for the Tivan® processing facility. Australian resource and mineral processing technology company TNG Limited is pleased to advise that it has completed a comprehensive assessment of alternative sites ("Assessment") for the TIVAN® Processing Facility ("TPF") proposed for Darwin as part of the environmental approvals process for its Mount Peake Vanadium-Titanium-Iron Project ("Project") in the Northern Territory.

Silver Elephant announces execution of plan of arrangement and spin-out of nickel and vanadium assets. Silver Elephant Mining Corp. announces that it has executed a plan of arrangement under the Business Corporations Act (British Columbia) pursuant to which, it shall (the "Arrangement"): [i] as disclosed in a Company press release dated August 26, 2021, transfer certain royalties presently held by the Company in certain projects of the Company to Battery Metals Royalties Corp. ("Battery Metals Royalties"), a wholly owned subsidiary of the Company; and [II] spin-out its Manitoba based Minago Nickel project ("Minago"), its Nevada based Gibellini Vanadium project ("Gibellini"), and Battery Metals Royalties each into its own entity (each a "SpinCo"). In connection with the Arrangement, the Company shall distribute shares of each SpinCo to the Company's shareholders ("Shareholders"). Pursuant to the Arrangement, it is currently expected that each Shareholder will receive one share of the Minago SpinCo, one share of the Gibellini SpinCo, and two Battery Metals Royalties SpinCo shares for every share of Silver Elephant held by such Shareholder on the record date for the Arrangement (the "Record Date"). The share distribution offers Shareholder direct participation in the growth and upside in each of the four companies' businesses (silver mining, vanadium mining, nickel mining, and royalty investments).

Silver Elephant: Gibellini Vanadium Project's PEA shows 25.4% after Tax IRR At $10/lb V2O5, Capex $147 million. Silver Elephant Mining Corp. is pleased to announce the results of a preliminary economic assessment (the "2021 PEA") for its Gibellini vanadium project ("Gibellini project") that demonstrates an after-tax internal rate of return ("IRR") of 25.4%, and after-tax cumulative cash flow of $260.8 million, assuming an average vanadium pentoxide [V2O5] price of $10.00 per pound. The Gibellini project is designed to be an open pit, heap leach operation in Nevada's Battle Mountain region (25 km south of Eureka) with initial capital cost of $147 million, average annual production is 10.2 million pounds of V2O5 , at an all-in sustaining cost of $6.04 per pound with strip ratio of 0.18 to 1 (waste rock:leach material).

Silver Elephant Provides Update and Schedule on Plan of Arrangement... it is presently expected that, pursuant to the Arrangement:

HPA Project - DFS precursor priorities... Work has progressed on the build of a Mini-Pilot Plant to demonstrate the ARC process works at a larger scale for the DFS and to produce batch marketing samples...