September has been following its historical pattern of being a rather poor month for the market. The S&P 500 in the month of September has declined an average of 1%, going back to 1928. This could be exaggerated as the broader index hasn't experienced a market pullback or correction since last year. That could mean we are primed for downside pressures as investors are looking for a reason to sell.

A market pullback is typically considered when the averages decline 5 to 10%. A correction would be classified as a 10 to 20% decline from highs. Declines of greater than 20% would put us in a technical bear market.

Pullbacks happen pretty frequently. Going back to 1945 there have been 84 pullbacks in the 5 to 10% range. 29 declines in the 10 to 20% range and bear markets are fewer, occurring nine times since 1945. 40% declines or more, while not having a technical name applied to it (maybe we can call it a double bear market), have happened three times since that same year.

As we can see above, the time to recover is relatively swift for these more minor pullbacks. The time for recovery increases further, the deeper the declines. Another important consideration is that it takes less time for the slides to happen than the time it takes to recover.

We've certainly seen a volatile tick-up as the VIX is heading higher. Market moves on September 20th really ramped this up. VIX is the measurement for CBOE Volatility Index. It measures the stock market's expectation for volatility based on the S&P 500 options. The higher that goes, the more investors will expect volatility. The chart below goes back 3 years to show last year's significant increase as March 2020 took over the market. We are still down considerably from that level but we have moved sharply higher this month now.

Overall, we've been having a fantastic year for the market, which was on top of 2020 also, strangely enough, ending up significantly from a period when we were down double-digits in March. The fastest bear market on record, followed by the quickest recovery on record. That just goes to show, no matter what those averages above tell us - each pullback, correction or bear market is unique.

Though it is worth mentioning that most of the deepest declines were brought on by a catalyst, the market doesn't usually just drop 20%+ for nothing. They are often black swan events that no one really sees coming.

What This Means For Closed-End Funds

For closed-end funds, all of this can add up to even more significant volatility. This is due to the price not being tied to the actual underlying net asset value. That is what opens CEFs up to discounts and premiums. In market sell-offs, we typically see discounts widen out significantly.

As we've been in recovery mode, we've seen the opposite. Discounts have become very narrow. In fact, discounts have only been more narrow 10% of the time going back to 1996, according to RiverNorth.

We have a bit of a catalyst here for muni funds, as higher taxes could push investors into muni bonds and funds. With Joe Biden looking to do just that, muni funds could remain at their lofty premiums. That is even despite the higher than usual premiums we are at now. As usual, I'm not here to debate the politics of it, but just how it could impact investing. 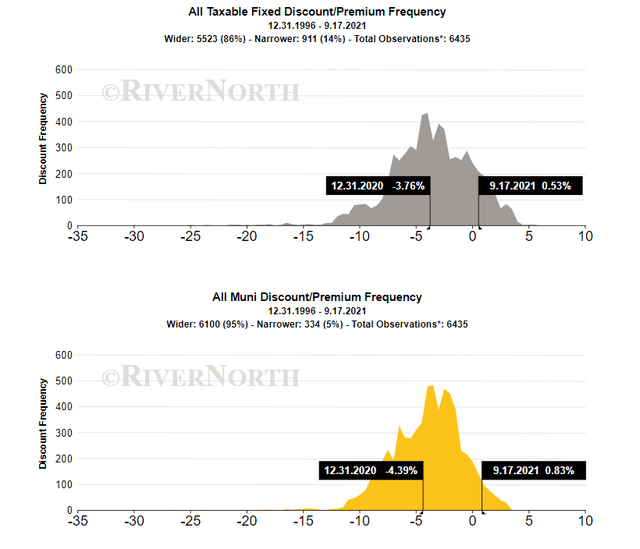 While at the same time, equity funds remain stuck in discount mode. The average discount is still coming at over 5%+. Though, the discounts have tightened considerably from what they were average at the end of 2020. That is for both equities and fixed-income CEFs. Higher taxes here could mean investors want to own less appreciating assets, especially if the capital gains taxes in Biden's plan comes to fruition.

Overall, the data shows us that equity funds are generally more discounted than fixed-income CEFs.

What Is All This Information Good For?

The purpose of going over the historical data and where we are for closed-end funds is to try to understand what could come next. As we touched on above, the deepest corrections and bear markets are often brought on by a black swan event. These are events that no one really sees coming.

Last year was a perfect example of this. Yes, we knew COVID was spreading throughout the world, but no one was really predicting the complete lockdown of economies around the globe. That just isn't something that happens at a mass scale. Thus, stocks and investments plunged.

I say all of this because that's why I stay primarily invested all the time, personally. The typical market cycle includes these pullbacks and corrections, despite how awful they can feel when going through them. Each significant decline in the market has had a subsequent recovery. So we are working with a long-term history that suggests we should continue to buy.

My strategy is quite simple. It isn't some complex methodology that requires endless calculations. For the most part, I buy every month. I share that with readers every month, too. When we start hitting near all-time highs, I begin getting cash ready for the following buying opportunity. This is easy to do when you have an income strategy as well, as the cash flow keeps rolling in. I typically target a cash allocation of around 10 to 12%. This is an entirely arbitrary number; others will have different ideas of what is best. They should also have different views, as each investor is in a different situation than my own.

However, when it comes time to start buying more is when we hit a 5% pullback. This is when I start putting my cash back to work. For a pullback, I start buying a little. During a correction of 10%+, I start buying a lot. When we hit a bear market of 20%+ declines, I start investing every cent I can. I end up being early more often than not. However, this strategy has treated me well over the years.

We aren't at a pullback yet, but I do see some attractive names that are worth investing in at this time. Or at least these are names that investors can put on their watchlist in the CEF space.

Sticking to that same basket, I also find the BlackRock Health Sciences (BME) and BlackRock Health Sciences Trust II (BMEZ) equally as attractive at these levels. These funds are focused on the healthcare space and can be less volatile than the BST and BSTZ pair above. Similarly, BME has frequently traded at a premium, while the newer BMEZ has traded at an average discount for its short history.

These are excellent deals as the broader CEF space shows historically narrow discounts; these funds are below their long-term averages.

Finally, I wanted to remark on PIMCO Dynamic Credit and Mortgage Income Fund (PCI) and PIMCO Dynamic Income Fund (PDI). These funds should be viewed as the same, as they are set to merge. That being said, recent distribution cuts at their sister funds have caused jitters throughout the PIMCO complex. PIMCO is often viewed as a source of stable income for investors. With those cuts, it hit their reputation a bit. These funds typically trade at premiums, so that exacerbated the whole event as well.

That being said, it would seem when the new PDI is formed, a distribution cut will more likely than not happen. However, with the premiums declining already due to the other cuts and this latest market dip, it could be a non-event now.

PDI's current premium of 3.59% is well below its average. So this would be one that I'll continue to watch for adding to my position.

Disclosure: I/we have a beneficial long position in the shares of BST, BSTZ, BME, BMEZ, PCI either through stock ownership, options, or other derivatives. I wrote this article myself, and it expresses my own opinions. I am not receiving compensation for it (other than from Seeking Alpha). I have no business relationship with any company whose stock is mentioned in this article.

Additional disclosure: This article was originally published to members of the CEF/ETF Income Laboratory on September 21st, 2021.

101 Comments
To ensure this doesn’t happen in the future, please enable Javascript and cookies in your browser.
Is this happening to you frequently? Please report it on our feedback forum.
If you have an ad-blocker enabled you may be blocked from proceeding. Please disable your ad-blocker and refresh.