Shares of Lucid Group (NASDAQ:LCID) lost momentum last week, but I believe the drop puts the startup's EV stock back on the map.

Lucid is going through a major transformation and turning into a full-fledged EV maker. The ground-breaking EPA rating from September, which placed the Lucid Air luxury sedan at the top of the EV class, and surging reservations indicate more upside for the stock!

Lucid generated considerable buzz in September when the Environmental Protection Agency gave Lucid’s first luxury sedan, the Lucid Air Dream Edition Range, a 520-mile EPA rating. No other currently available electric vehicle comes even close to the Lucid’s range rating, including Tesla (TSLA)’s Model S Long Range... which has a range of 412 miles. With the range-busting EPA rating, Lucid’s first-ever product made a splash even before it is available in the market. 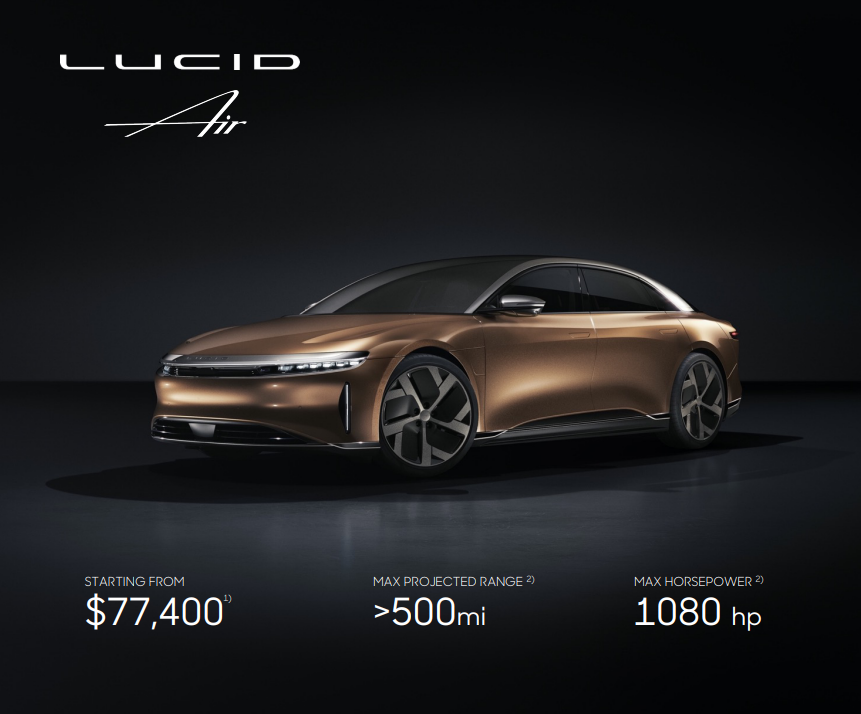 The high price points for Lucid’s top-of-the-range sedans are not repelling potential buyers, it seems. In a reservation update made last week, the EV maker said that Lucid Air reservations now top 13,000… although the firm is not breaking paid reservations down by model/specification.

The reservation status for the Lucid Air has improved by 30% since June, with limited to no marketing from June to September, which means Lucid added an average of 1,000 reservations per month. Since the announcement of the Lucid Air’s record 520-mile range rating was made in the middle of September, we don’t know what impact the buzz announcement had on reservations… but I believe reservations increased materially after the EV maker received the EPA rating. Going forward, I expect the EV maker to see higher demand and strengthening growth in reservations as actual deliveries begin.

Lucid held a press event at its Advanced Manufacturing Plant (AMP-1) in Casa Grande, Arizona at the end of September where the first Lucid Air luxury electric sedan rolled off factory belts. The EV maker also confirmed that customer deliveries will begin in October… meaning Lucid is now transforming from a development stage into a production stage company. Because Lucid will begin customer deliveries this month, there is upside in reservations even before Lucid ramps up production. Initial reviews for the Lucid Air have been great and the start of actual customer deliveries will only help to create a bigger marketing opportunity for the firm.

In the short term, I expect Lucid Air to generate revenues of $1.40B to $1.75B, based off of 20,000 - 25,000 reservations. Longer term, I believe Lucid will grow into its annual manufacturing capacity of 53,000 vehicles. On a monthly level, this means Lucid could produce and deliver more than 4,000 vehicles... more if the EV maker adds manufacturing space to respond to strengthening demand. This may take 3-4 years to pan out but if the Lucid Air is as successful as I believe it will be based on initial reviews, then Lucid is looking at a minimum of $4.0B in revenues by 2025 (revenue estimate calculated assuming base configuration). Lucid’s $39.10B market value already anticipates a lot of this growth, but the EV maker is set to be the only company with a focus on the high margin luxury sedan market.

Moving into the manufacturing stage reduces the enormous risks that are normally associated with EV startups. Lucid has also been able to attract reservations without aggressive marketing tactics and the EPA rating lends the EV maker credibility as its first models roll off the assembly line. However, Lucid is no Mercedes and the firm has no significant manufacturing experience. Rivals are also not sleeping at the wheel and might offer similar products in the luxury sedan segment to compete with Lucid instead of ceding the entire market to a newcomer. Tesla is likely going to be Lucid’s main rival, although Tesla is not offering EV luxury sedan models (yet).

Lucid's announcement last week is a testament to its accelerating evolution: The firm is moving out of the development stage and transforming into an actual EV production company… which means Lucid will be a lot easier to value in the future as the market gains a clearer picture of production capacity and potential for sales. I believe Lucid is primed for a top position in the EV luxury sedan segment and could generate 2,000 to 3,000 reservations monthly over the next twelve months. As the speed of deliveries ramps up in the coming months, more buzz could be created around the Lucid brand... which could also power shares higher!

Disclosure: I/we have a beneficial long position in the shares of LCID either through stock ownership, options, or other derivatives. I wrote this article myself, and it expresses my own opinions. I am not receiving compensation for it (other than from Seeking Alpha). I have no business relationship with any company whose stock is mentioned in this article.