The O'Shares U.S. Quality Dividend ETF (BATS:OUSA) has been a big disappointment since its inception in July 2015, particularly in the last three years as it's missed the S&P 500 by 6.20%, 11.40%, and 6.55%, respectively. In trying to figure out what had gone so wrong for the fund in April, I determined that OUSA was indeed a low-volatility ETF masquerading as a high-quality dividend fund. It ended up being one of many following this theme to lag the market during the COVID-19 recovery severely. With few (if any) growth stocks selected to help keep pace with the market, OUSA fund managers unnecessarily took the risk of being poorly diversified by risk type, and investors have been paying for the mistake ever since.

This article will examine OUSA's fundamentals and examine it through criteria that have proven to work in the current environment. I'm surprised to say that I now have a positive outlook on the fund, albeit temporarily. Constituents are highly profitable, the beta has increased such that it's no longer an ultra-low-volatility fund, and debt levels are manageable. If you're looking to shift some of your equity exposure to a safer ETF with a moderate yield, I think OUSA is a strong contender.

According to its fact sheet, OUSA looks to invest in companies with solid balance sheets, profitability, and dividend quality which, ideally, will provide better risk-adjusted returns than market-cap-weighted funds. Dividend safety is paramount, and an emphasis on dividend quality is essential to avoid dividend cuts and suspensions.

As of June 1, 2020, OUSA now tracks the O'Shares U.S. Quality Dividend Index after previously tracking the FTSE USA Qual/Vol/Yield Factor 5% Capped Index. Therefore, historical performance will be discussed but not relied on when assessing the fund's prospects.

The Index is rebalanced quarterly and reconstituted annually, with portfolio turnover being 26% for the most recent year. Criteria for selections can be found in OUSA's rule book and focus on four key areas: quality, volatility, yield, and dividend quality.

Constituents are ranked accordingly, and a 5% stock weight cap applies at each quarterly rebalancing. Upon its annual reconstitution, a 22% sector cap also applies. Additional OUSA highlights include a 1.76% trailing dividend yield, a 0.49% expense ratio, and $675 million in assets under management. Many dividend metrics, such as the five-year growth rate, are unavailable on Seeking Alpha due to the fund's Index change. However, I will be filling in these gaps with an in-depth fundamental analysis of OUSA's current constituents later on.

As of September 30, 2021, OUSA was exposed to just seven sectors out of a possible eight per the S-Network US Equity Large-Cap 500 Index (Energy, Materials, and Real Estate are absent). You'll notice that the Utility sector is also missing; I reason that it's due to high debt levels affecting the first screen noted above.

As for the top ten holdings, they comprise 39.41% of the fund. The weighted-average market capitalization of all assets is $367 billion, primarily due to trillion-dollar stocks like Microsoft (MSFT) and Apple (AAPL) taking some of the top spots. Overall, it seems like a high-quality group of stocks, even with the four missing sectors.

We need to look at two types of performances, each with its advantages and disadvantages. First, we can look at OUSA's performance since inception, as this will give us insight into how well the fund performed without the benefit of hindsight. The disadvantage is that most of this data is based on how the old Index was constructed and might be inappropriate. The second type of performance analysis is on the Index's data which goes back to the Great Recession period. The advantage here is that we can see the quality of the current Index's criteria in the long run. The downside is that it would include a lot of backtested data. It's never difficult to determine which metrics were important in the past; instead, the challenge will always be to find ones that work well in current and future environments, too. With that said, let's take a look at each one separately.

The following chart compares OUSA against the S&P 500 Index ETF (SPY) and the Schwab U.S. Dividend ETF (SCHD), a popular low-fee, high-quality dividend ETF that I've analyzed numerous times and have been pleased with the results.

As shown, up until the March 2020 crash and the subsequent strong recovery of growth stocks, OUSA performed pretty well despite its higher fees. Over time, though, its annualized growth rate was over 3% less than these two comparators, albeit with less volatility. The quality feature didn't matter so much either, as the drawdown in Q1 2020 was roughly the same at 20.17%. In my April article, I attributed this to the pitfalls of a low-volatility strategy. Its 0.81 five-year beta at the time was devastating for the fund, and although this figure has increased since, it remains vulnerable after market crashes. We're not there yet, though, so there's no reason to panic.

The OUSA Index page provides Index values back to 2007. There doesn't appear to be a feature to download the chart data, but I did compile month-end values to calculate volatility levels and compare them with the S&P 500. After adjusting for OUSA's annual fees, here's what growth of $10,000 would have looked like:

I want to begin my fundamental analysis with a snapshot of the fund's top 20 holdings. In OUSA's case, this accounts for 58.74% of the fund, so it's a pretty good starting point. 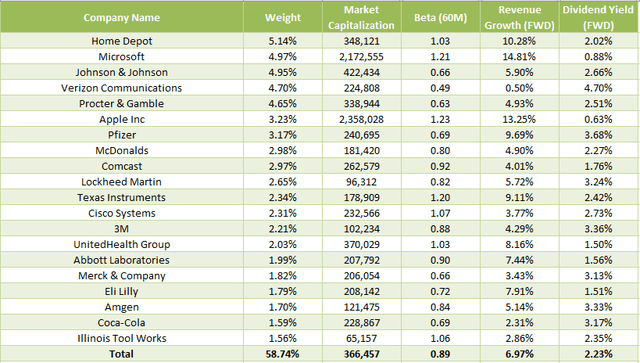 We can see some aspects of the fund's criteria at work here. First, the fund's five-year monthly beta of 0.89 is notably much higher than the 0.81 figure I observed in April. Generally speaking, this helps explain how OUSA has managed to capture most of the upside the S&P 500 has experienced recently. Second, the fund's weighted average forward revenue growth rate of 6.97% is just a bit more than half of what I've calculated for the S&P 500. I don't find this surprising; most value funds obviously have low growth rates, and OUSA's fund facts document places it firmly in the large-cap value category, as does Morningstar's classification system. Finally, the net forward dividend yield of 2.23% is slightly under 1% more than the S&P 500; however, OUSA's higher expense ratio of 0.48% will eat into these distributions. This is the primary reason why OUSA's trailing yield is just 1.76%.

While long-term dividend metrics aren't made available by some third parties due to the Index change, you can still get OUSA's dividend history from its website. I've compiled trailing annual dividend rates back to July 2016, as shown below. 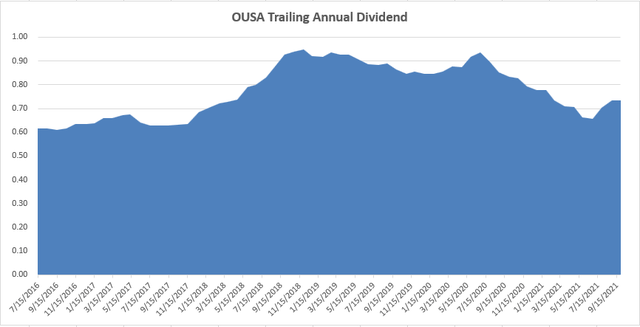 In the last twelve months, dividends paid totaled $0.733 compared to $0.609 five years prior. This increase translates into a five-year growth rate of 3.77%. In looking at the table below, though, this is relatively low considering that OUSA's constituents have grown dividends at a rate of 10.21% per year. As a reminder, most of this is because distributions are made net of fees. If you're looking to start a dividend growth engine through ETFs, my advice is to stick with low-fee options. 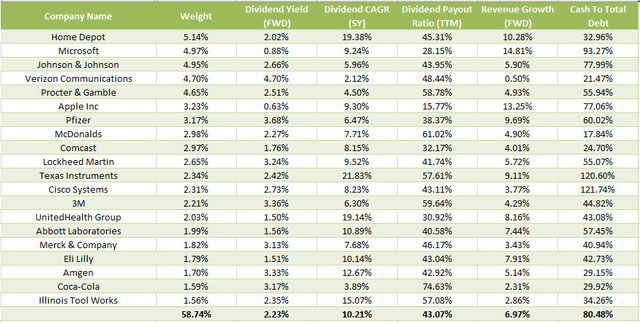 Instead, OUSA's focus is primarily on dividend safety, and it certainly looks like they are strong on that front. Dividend payout ratios are very low, netting to just 43.07% for the entire fund. Only one stock in the top 20 has a payout ratio of more than 65%, which is a crucial screen for one of my favorite ETFs, the First Trust Rising Dividend Achievers ETF (RDVY). Also key to the fund, which I recently wrote about, is a requirement for a 50% or greater cash to total debt ratio. OUSA's is 80.48%, and I don't think I have come across a dividend ETF that scored so well on this metric. 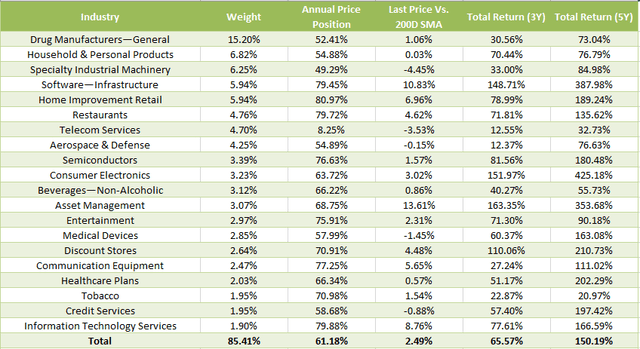 You can see that while OUSA's constituents have a little less short-term momentum, they're mostly terrific performers in the last three and five years relative to the S&P 500. However, a lot of pressure is on drug manufacturer stocks like Johnson & Johnson (JNJ) and Pfizer (PFE). According to Seeking Alpha's Quant Factor Grades, this significantly overweighted industry is highly profitable but has inferior growth prospects.

Looking at the complete picture, we see these poor growth scores extend across the entire fund in exchange for outstanding profitability ratings. These differences are essential. If the current low-interest-rate environment persists, I think OUSA will continue to underperform despite its high-quality holdings. However, if high inflation pushes interest rates higher sooner than expected, there should be a flight to safety, and OUSA will outperform. 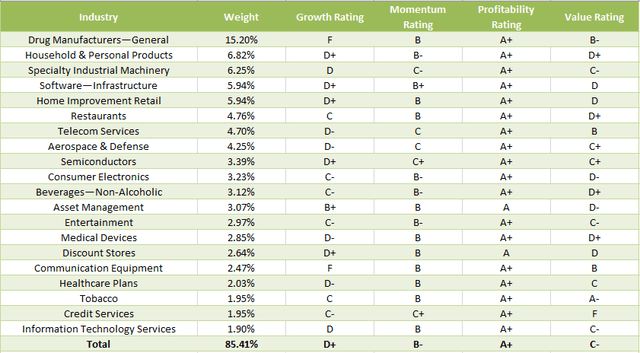 There was a fair bit to unpack with OUSA, but given my analysis of its strategy, past performance, fundamentals, and technicals, I conclude that the good outweighs the bad. OUSA's constituents have terrific cash to total debt ratios, which I feel is one of the most critical determinants of a quality company. In addition, I currently place greater importance on profitability over growth, as it's not worth it for me to chase high-growth stocks when inflation is running rampant.

The concerns I raised in April are still valid. OUSA is at risk of significantly underperforming after a correction and should not be held throughout an entire market cycle. However, we're at the top of one right now, and I prefer it over highly sensitive dividend ETFs with poor financial health. So, I'm bullish on this ETF today, but only temporarily, and I look forward to updating my rating after the next correction.

Disclosure: I/we have a beneficial long position in the shares of SPY, MSFT, SCHD either through stock ownership, options, or other derivatives. I wrote this article myself, and it expresses my own opinions. I am not receiving compensation for it (other than from Seeking Alpha). I have no business relationship with any company whose stock is mentioned in this article.