We wrote about Newmont Corporation (NYSE:NEM) back in June when we reaffirmed our position that Newmont remained an excellent candidate for dividend growth capital. Since that commentary, Newmont shares have lost just over 13% in value which is basically on a par with what the price of gold has shed in that time-frame. Today, we are reiterating our stance in Newmont in that we believe the stock is an attractive long-term dividend play. The key word here though is "dividend" as the precious metals sector may experience some volatility in the short term for reasons, we now will delve into. Long-term for the record, we remain bullish on gold and solid gold mining companies such as Newmont.

To explain why gold and associated ETF's and miners may not have blue skies ahead at least at this juncture, we need to go to gold's long-term chart. As we can see below, gold trades in 8-year cycles where the last clear 8-year cycle low was in December of 2015. Some of gold's long-term cycles come in slightly short of 8 years while other extend the cycle by a few months or so. The average though is 8 years which means the current 8-year cycle is only two months short of being 6 years into its current cycle. Suffice it to say, with approximately 26 months left before gold prints its next 8-year cycle bottom, the odds are high that this cycle has already topped. This means Newmont may be stuck in a pricing range for some time to come with limited potential to take out its $70+ 2021 high any time soon. 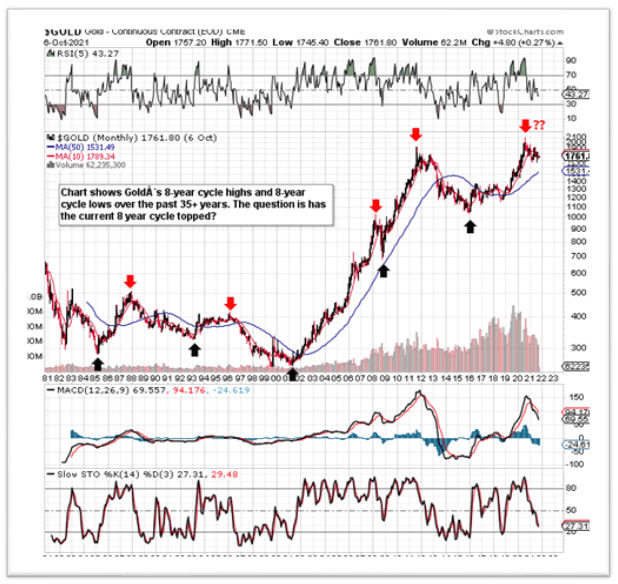 Gold's long-term cycle is one of the reasons why we see Newmont more of a dividend play at present over a capital gain play. Even if gold is presently moving down into its 8-year cycle low, the 50-month moving average of approximately $1,530 per ounce looks a good target for a potential 8-year cycle low.

In saying this true long-term dividend investors (where portfolio income in the priority) prefer lower prices in their underlyings. The reason being is that more stock can be bought with the same amount of capital which means compounding can occur at a much faster rate. So, from this standpoint, here are some reasons why Newmont continues to represent a very attractive dividend play and why we don't see significant downside in the stock even if gold is presently undergoing its 8-year cycle decline.

First is we look at the slide below, we see that Newmont's projected cash-flow looks very solid even if gold prices were to collapse from present levels. Even with gold at $1200 per ounce, management expects operations to still be able to deliver $3.5 billion of free cash-flow within a five-year period which comes in at $760k when averaged out annually. This $760k FCF number is just over half of what is being paid out annually in dividends at present but remember the current forward pay-out comes in at $2.20 per share. When we tie these numbers to the dividend, management is stating that if NEM shares collapsed to $30 a share for example working off a gold price of $1200 an ounce, the company would still have the wherewithal to pay $1 a share in annual dividends which would result in a yield of 3.33%. Impressive to say the least. 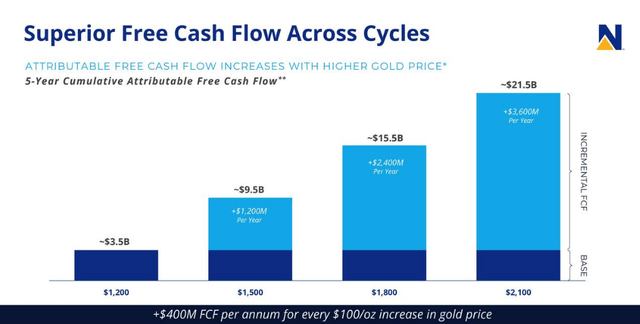 This is quite a pledge considering $1200 an ounce is $550 an ounce below the current gold spot price but when we look at the cash-flow projections, we see how the numbers make sense. For example, management expects that for every $100 an ounce increase in the price in gold above the $1200 level, approximately $400 million of additional free cash-flow will be generated per year.

Low All In Sustaining Costs

Suffice it to say, a falling gold price is not a valid reason to begin liquidating a long investment in Newmont. The miner is extremely profitable at the current prevailing gold price and will remain so even after a large potential pullback. All of the miners' regions for example are currently reporting all in sustaining costs under the $1050 an ounce mark. In fact, due to strong performances in the African region (In Akyem & Ahafo) as well as in North America (Through continued improvement at Penasquito), almost 53% of Newmont's production year to date has all in sustaining costs coming in at under $975 an ounce. Therefore, as long as production remains elevated (which is what is being guided), Newmont will continue to print money even if the firm has to sell that very same gold at much cheaper prices than it is doing at present.

Therefore, to sum up, we believe Newmont investors need to be patient as we may be entering a period where no new highs will be registered for quite some time. The stock though still stacks up as a compelling dividend play in our opinion as dividend investors can use this opportunity to load up on NEM on the cheap. Given the inflation we have seen in other commodities such as aluminum and natural gas of late, we believe the gold mining complex eventually will follow suit. We look forward to continued coverage

Elevation Code's blueprint is simple. To relentlessly be on the hunt for attractive setups through value plays trading under intrinsic value. To constantly put ourselves in positions where we have limited downside but yet significant upside always remains the objective of the portfolio.

Disclosure: I/we have no stock, option or similar derivative position in any of the companies mentioned, but may initiate a beneficial Long position through a purchase of the stock, or the purchase of call options or similar derivatives in NEM over the next 72 hours. I wrote this article myself, and it expresses my own opinions. I am not receiving compensation for it (other than from Seeking Alpha). I have no business relationship with any company whose stock is mentioned in this article.