With Natural Gas (NG1:COM), NG, supported by global climate change theorists as a transition energy, it seems that investors might seek a more heavily weighted portfolio containing NG companies over crude oil for profiting during the coming energy changes. With gas prices already reflecting a bull market, investors might be a little selective with their choices. Our qualitative analysis reflects a general picture defining real obstacles facing coming energy changes plus the real viability for NG's continued use.

Beginning with the environmental argument for natural gas, it burns cleaner, emits less other pollutants such as nitrous oxides, and produces no particulates when compared to other fossil fuels. But others argue that renewable sources such as wind and solar, which produce no carbon dioxide, are superior. One author summed up a consensus, "Opinions tend to run the gamut on natural gas and the cleanest ways to use it, but most can agree that it's eco-friendly -- but flawed -- energy source." Because of this, NG finds itself positioned as at least a transition source of energy. It might last much longer.

Continuing, natural gas, a naturally occurring fossil fuel, composed of one carbon and four hydrogen atoms, powers, provides residential heating and many other uses much of America. The following slide summaries its uses by percentage. Again, it also provides a 1/3 of our nation's total energy needs. 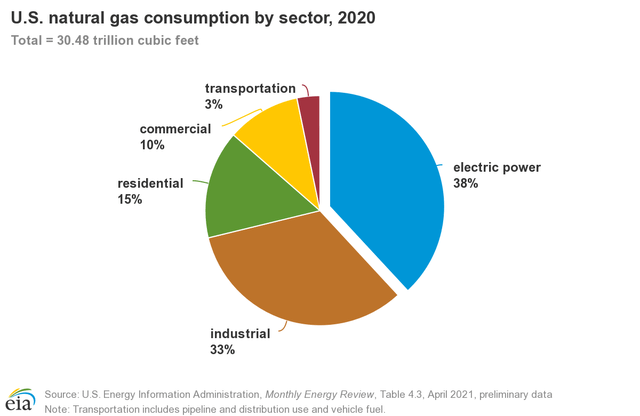 Producers employ methods such as fracking or traditional drilling in producing this source. Existing pipelines transport it to markets across the United States.

A Status Which Defines Price

Let's continue by describing the current market. Even with Appalachia breaking production records, other significant forces drive the price. Strong foreign exports and elevated summer temperatures in the United States plus shunted production from the shale basins equal lower inventories creating higher prices. Although experts a few weeks ago predicted prices to reach the $4 per therm., actual spot prices on Friday, September 17th broke into the $5 range. In Europe, it is even worse with prices near $20. An unusually cold European winter coupled with a more robust economy with Europe recovering from last year's virus is driving pricing much higher. With high prices in Europe, US export demand is surging. American prices could still double. We included a chart showing Henry Hub pricing for the past 5 years. It isn't pretty for users. 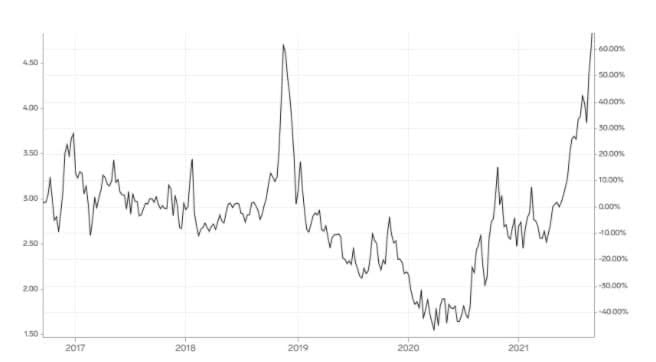 For this winter, huge heating cost increases for consumers are imminent.

Future Sources of Energy (The Competition)

A modern energy perception states that the presence of carbon dioxide in the earth's upper atmosphere significantly affects the earth's weather and weather patterns. The goal derived from this perception includes eliminating fuels which contribute to this phenomenon. As stated above, NG contributes less carbon dioxide for the same energy delivered than other forms of fossil fuels, because the hydrogen to carbon ratio is highest. With other energy sources, wind and solar, adding zero carbon dioxide, an effort to replace all fossil fuels with carbonless renewable opportunities is afoot. In addition, the availability of natural gas, being a limited, non-renewable source, will in time run out. With the attribute of being renewable, other sources such as wind, ethanol, and solar will become essential longer term.

As part of the transition, the conceived conversion of renewable energy into hydrogen is a means for transporting it through a more flexible form. Wind can't be transported nor completely relied upon. The night/day or weather relationship for solar generation poses the same problem. The conversion, in the view of some, means converting to hydrogen transforms unreliability into a reliability and transportability.

The following picture contains a simple process diagram for manufacturing green hydrogen. The process begins with electricity and water splits the hydrogen and oxygen through electrolysis generating pure oxygen and hydrogen. Wind or solar is the envisioned source of electricity creating in theory a complete absence of carbon dioxide.

The problem described in an editorial caps societal abilities to produce these cheap sources of renewable energy. "However, there is an elephant in the room that must be addressed — producing the vast quantities of green H2 that the world will need would require an absolutely massive amount of renewable energy." Or one data source claims that 150 million tons of green hydrogen a year must be produced consuming the "equivalent of 1,775GW of offshore wind farms, 2,243GW of onshore wind, 4,240GW of solar PV or 957GW of nuclear power." The current world installed base for these sources remain grossly short at "540.4GW of onshore wind, 23.4GW of offshore wind, 480.4GW of solar PV, and 397GW of operating nuclear reactors." Coupled with higher cost than blue hydrogen, green hydrogen remains an elusive endeavor. Many believe that only government intervention will jump-start the production of this source. An inspection for needed infrastructure includes a longer list. Production plants are best located where water and solar or wind energy are together abundant. Deserts, for long days of sunshine, or high wind locations such as coastal areas (morning and evening winds) provide sustainable sources of renewable energy, but may or may not be ideal locations for the enormous amounts of freshwater required. After hydrogen is produced, it must be transported, most efficiently with pipelines.

With wind electrical generation, gigantic turbines, generally erected at places of higher elevation, generate power when and only when wind exists. The generated power must then be transported to its users. The remote location of the windy areas can impede the real availability for this form of electrical generation.

Solar requires space for panels or mirrors and is generally placed in areas which possess long periods without weather interruptions.

Ethanol made primarily from the fermentation of corn or other agricultural products has many uses, but primarily is used as an octane additive for gasoline. This last source seems more like a niche source remaining targeted for use with what ends up being the remnant of petroleum-powered cars and trucks.

It seems to us that the viability for NG resides within the societal abilities and willingness for converting renewable energy into hydrogen.

Natural gas seems posed to continue its major energy role. Why? The blue and grey forms of hydrogen begin with NG. Green hydrogen faces extreme capital investment over the next decade or two to bring online. So, we ask a few questions. With this transition from NG to H2, can the two be mixed within existing pipelines? This is a question for engineers, but if so, existing pipeline companies offer compelling infrastructure. Developing dual pipeline paths creates again another capital nightmare for any hydrogen transition.

As stated above, electrical production straight from wind or solar carries with it a major risk for baseline loading. The unreliability from changes day/night in solar and weather changes for wind leaves a valid concern for relying completely on these unaltered sources. What is the real solution posed here?

The discussion of electrical production costs muddies the water further. Because of heavy investment, costs for generating renewable electrical energy dropped into the same range with traditional i.e. coal, NG, or oil. We include a graph touting the cost effectiveness of producing electricity from renewables. 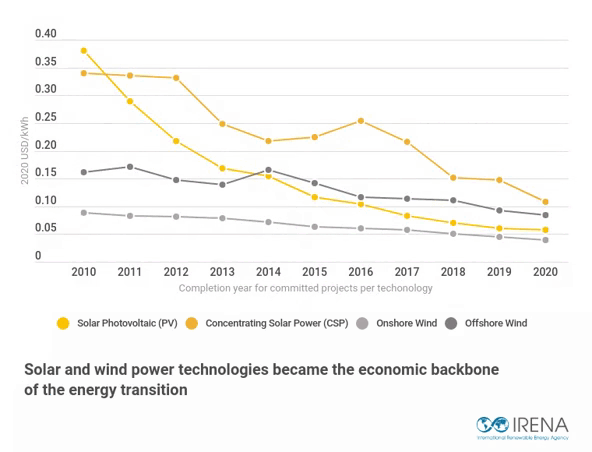 For power companies, choosing some level of renewable generation depends more upon base vs. peak loading rather than costs.

The reality that non-renewables have finite lives pushes the reality that over time a transition must take place. For NG "at the rate of U.S. natural gas consumption in 2016 of about 27.5 Tcf per year, the United States has enough natural gas to last about 90 years." Its life is still long, but not infinite. (Investments in my lifetime certainly won't face reserve shortages.) Yet, the resolve for complete conversion remains political. Continuing, we commented in an article, The Coming Oil Crisis," "Critical forces both internal and external steaming ahead likely seal with certainty a coming crisis, one different than the Administration in Washington sought back in January. Their hope seemed aimed at destroying the viability of crude oil under the guise of climate change. The realization seems more laser-focused at a perfect storm driving higher profitability." If government chooses to overleverage investment into the renewables, the incredible cost of traditional energy sources from lack of investment opens voter doors into making major leadership changes. Recent polling numbers suggest changes might be in the works.

From another article, With Investors Throwing In The Plains All American Towel, It's Time To Evaluate Its Real Financial Health, we wrote, "Roughly 81 percent of existing production is already in decline." Each year existing wells lose approximately 4 mb/d." With OPEC and other world energy organizations predicting crude oil usage near 100 m barrels/day usage, the depletion in oil production naturally forces investment, an investment that isn't small in size. Again, how long will citizens in free nations tolerate extreme traditional pricing from mandated investment into future energy?

On the other side, it is clear at least for us, that an energy change into renewables is necessary. This change is needed to protect against possible $300-$1000 a barrel crude oil. An influx of electric-powered vehicles seems posed to benefit all of us by mitigating this negative possibility.

What seems clear is the security for NG's viable future. NG-producing companies such as Antero Resources Corporation (AR) might be excellent investments. What seems more certain is that NG transportation companies as a group have an even brighter future. Transporting either NG or H2 requires pipelines. Transportation companies, such as MPLX (MPLX) or Antero Midstream Corporation (AM), or other companies, which also yield near 10%, might be even better. A lower risk with a dividend collection seems like a solid combination.

Investors must remember, whenever government is involved, higher risks exist. On a dime, policies change. But we also view this risk minimal or mitigated through voting if a ruling regime steps too far out of line.

Patient Tech Investor
2.44K Followers
I have been an investor for several decades enduring the 87 crash, 2000 crash, and 08 crash. I do use trading systems developed with TradeStation. I have enjoyed the rewards from both buy and hold and trading. My professional experiences includes several decades as a process control engineer. I hold a JD from an eastern law school.

Disclosure: I/we have a beneficial long position in the shares of AM either through stock ownership, options, or other derivatives. I wrote this article myself, and it expresses my own opinions. I am not receiving compensation for it (other than from Seeking Alpha). I have no business relationship with any company whose stock is mentioned in this article.

Additional disclosure: We own MPLX, AM.