We came across Advanced Emissions Solutions, Inc. (NASDAQ:ADES) (Refined Coal and Advanced Purification) from a value screen which we ran where the objective was to find low priced optionable companies trading at ultra-oversold levels. As we can see from the long-term chart below, shares registered a crossover in the popular MACD technical indicator in the early months of this year. We believe this indicator (which plays a dual role as it monitors both momentum and trend) is particularly significant on long-term charts due to the extra information that is able to be digested. 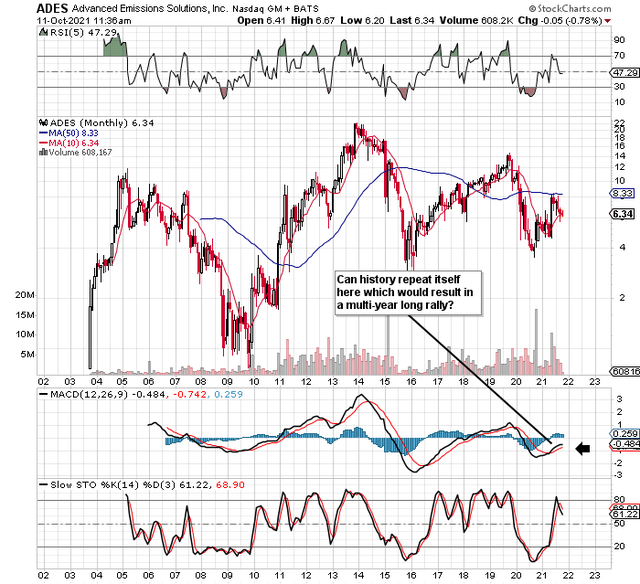 Suffice it to say, if history repeats itself, shares of ADES could be in the very initial stages of a multi-year rally which could easily span 4+ years like we saw between 2009 and 2013 and again from 2016 to its subsequent multi-year high in 2020. Remember, human psychology is not something that changes very easily. We believe there is value in learning from past patterns, as more often than not, they repeat themselves in the future.

One area which is definitely a pillar of the puzzle when ascertaining the long-term potential of a company is the balance sheet. While the financial conditions are not the be-all and end-all on whether a stock should be bought or sold, it can give the investor insights on whether the bullish technical setup we are presently witnessing indeed has some validity. We will go off the company's recent 10-Q, compare to year-end 2020 numbers, as well as look at trends over the past five years for insights. 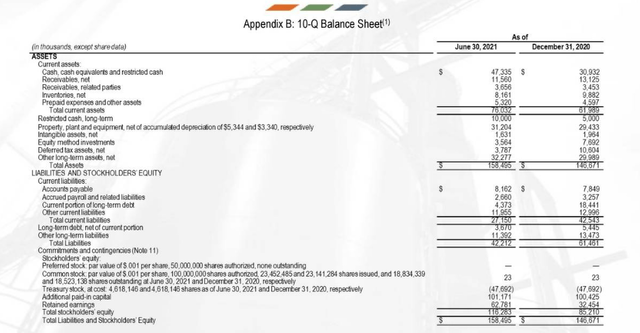 Cash being a liquid asset is always welcome in abundant amounts on the balance sheet as it protects against liquidity risks. What investors must watch however is how this cash is being generated which we will find out further down the balance sheet. As we can see in the slide above, cash and equivalents came in at $47 million in the recent second quarter which was a sizable jump from the year-end figure in fiscal 2020. Over a five-year perspective, cash & cash equivalents have now risen by approximately $33 million from a standing start of approximately $13 million in 2016. Off to a solid start.

Cash & equivalents is by far the largest line-item in ADES's current assets so we will go directly to the current ratio to assess the company's liquidity. This ratio informs us on whether Advanced Emissions Solutions can meet its short-term debts in the event of operations being disrupted for whatever reason. ADES's current ratio came in at 2.8 in the second quarter of this year which again was well ahead of the same metric at year-end last year (1.46). When we look at the five-year trend, we see that the current ratio of 2.8 is the highest ratio we have seen with the exception of fiscal 2017 (5.36) just before the company started to take on more debt. We look for current ratios over 2 so again an encouraging trend here.

Property, Plant & Equipment came in at $31.2 million in Q2 which meant it increased slightly from the $29.4 million figure at the end of fiscal 2020. Although the 5-year trend shows rising numbers for this line item, Property, Plant & Equipment has remained elevated since 2018. Rising PP&E is not a problem when the returns are there to meet it. On the contrary, when a company has to repeatedly increase their PP&E to remain competitive, this usually means that the spending is unsustainable in the long run.

The lack of sizable goodwill & intangible assets plus the strength of the company's non-current assets meant that total assets came in at $158.49 million at the end of the recent second quarter. This was an 8% increase over Q4 last year and a 48% increase in the company's assets over the past five years alone. Instead of calculating the company's ROA off its net earnings, we like to do this calculation off trailing twelve-month operating cash flow as we believe it is a more accurate metric of the company's profitability. Over the past four quarters, ADES generated approximately $49 million in operating cash flow which means that cash-adjusted ROA at present comes in at 31%. This metric turned positive in 2019 due to much improved cash flow generation and has maintained itself above 30% since then.

At the end of the recent second quarter, management reported approximately $8 million of interest-bearing debt. Again, the firm's trends look favorable here as approximately $24 million of interest-bearing debt was on the company's balance sheet at the end of fiscal 2020. The $8 million number mentioned above is expected to keep on coming down due to PPP loans (which have been subsequently forgiven) coming off that overall amount. Although management has not always run a conservative balance sheet, the most recent debt to equity ratio of 0.05 is the lowest we have seen for quite some time. ADES looks very strong in this department especially when you consider how quickly the remaining $5 million of debt could be paid off with the current earnings of the company.

As we can see from the slide above, ADES has been holding just under $48 million of treasury stock on the balance sheet for quite some time now. This amount corresponds to shares which management has bought back which means they could be retired at any point. Suffice it to say, the $116.28 million of shareholder equity reported at the end of Q2 this year is really higher than it looks given the size of that treasury stock (which appears as a negative line-item). Obviously, the negative effects of holding a sizable amount of treasury stock also affects the price to book ratio which comes in around the 1 level at present. Again, if we stripped out the negative effects of the firm's treasury stock, the edited book multiple would come in at a much more discounted 0.73. Something to think about.

Retained earnings are exactly what they depict and here is where shareholders should be getting excited. They are the company's profits which are retained from shareholders in order that they be solely invested back into the company to attain higher profitability. This line-item is a cumulative figure and came in at almost $63 million in the recent second quarter as opposed to $32.45 million at the end of fiscal 2020. Suffice it to say, the company has plenty of ammunition (especially given historical ROIC rates) to keep on growing the business aggressively in forthcoming years which is what shareholders want to see.

After reviewing some of the key trends in Advanced Emissions Solutions' balance sheet, there is a lot to like here. The company's cash balance continues to grow which is bolstering the liquidity position. Elevated cash flow generation has resulted in the aggressive paying down of debt and retained earnings continue to grow. Furthermore, the company's treasury stock position informs us that Advanced Emissions Solutions' financial position is even stronger in reality than it looks on paper. The bullish technicals do indeed have validity. We look forward to continued coverage.

Elevation Code's blueprint is simple. To relentlessly be on the hunt for attractive setups through value plays trading under intrinsic value. To constantly put ourselves in positions where we have limited downside but yet significant upside always remains the objective of the portfolio.

Disclosure: I/we have a beneficial long position in the shares of ADES either through stock ownership, options, or other derivatives. I wrote this article myself, and it expresses my own opinions. I am not receiving compensation for it (other than from Seeking Alpha). I have no business relationship with any company whose stock is mentioned in this article.