The market has been melting, and that "buy the dip" mentality seems to be in trouble. There's an excellent reason for why buying the dip hasn't worked, and probably why it won't work this time around either. All you have to do is look at the VIX and the SKEW indexes to understand why.

Falling volatility has been a lynchpin of propping up the market every time it falters since the COVID low. Every time the market sank, the VIX would spike higher. Then, a swarm of traders would come in looking to short volatility, which would send the VIX lower, pushing the S&P 500 higher. However, that component of the market appears to be gone. The VIX has been steadily rising since June, with higher lows. More recently, the VIX hasn't been able to get below 18, and each drop in the S&P 500 has seen lower highs. 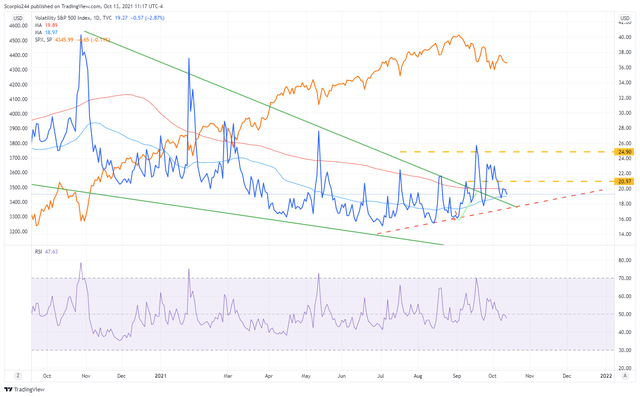 Additionally, the SKEW index has cratered in recent weeks. It's because traders that have been betting on volatility falling have likely been shorting at-the-money forms of it, and to hedge those positions, they have been buying out-of-money forms. It's why the SKEW index reached record highs in June as the VIX hit its lows.

If volatility sellers do not return to this market, then a big piece of why the market always has been able to bounce back so quickly on every dip will be gone. Buying the dip will simply not work. 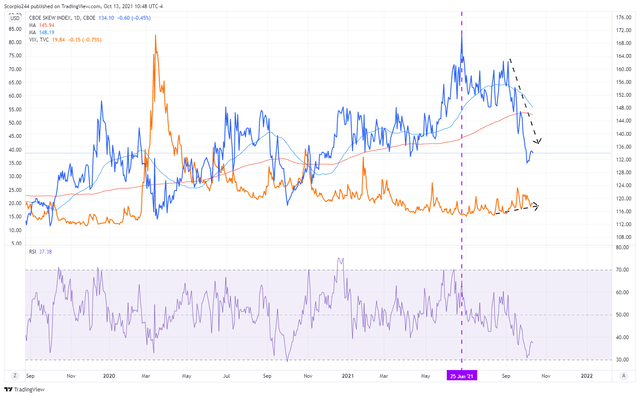 But with QE likely on its way out, financial conditions are likely to tighten as a result. It seems that volatility sellers have gone missing for a good reason. If that's the case, the considerable risk in the market isn't going to be the fear of missing out. The substantial risk is a meltdown, not all that dissimilar to that of 2018, which I have noted on several occasions many of the same similarities of today to back then.

The two-year Treasury rate has also been creeping higher and now stands at more than 35 bps. The two-year most likely needs to rise much more if the Fed is tapering. By the time the QE taper ended in October 2014, the two-year was around 50 to 60 bps. That means the two-year now has further to climb as this process commences potentially as soon as the November FOMC meeting.

Despite the stronger dollar, the 10-year has been falling, and that's because the market is picking up on what I have been telling you for months. Growth rates here in the U.S. and around the globe have been slowing and are now near stall speed. They have gotten so slow here in the U.S. that the Atlanta Fed GDPNow is now projecting just a 1.3% third quarter growth rate, an enormous drop from the second quarter reading of 6.7%. 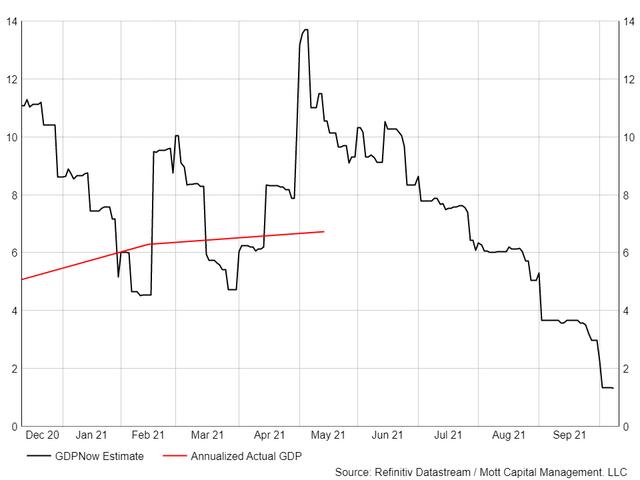 The market knows that a strong dollar in regular times exports inflationary forces aboard in countries that buy commodities, finances debt, or conduct business in dollars. It's a global growth killer. On top of that, rising prices for things like energy are already likely to slow growth, and now with the dollar rising, it makes the problem even more prominent. It is driving the rates on the long-end of the curve lower and flattening the yield curve.

This time is different from previous pullbacks. This is why this time the pullback is only in its early phases. Earnings estimates have started to come down, and they are likely to come down further because if one thing is crystal clear, GDP growth expectations were way off base, and means that it is highly likely that earnings estimates are way off base, which means earnings growth rates will be heading lower or top of what they have declined. 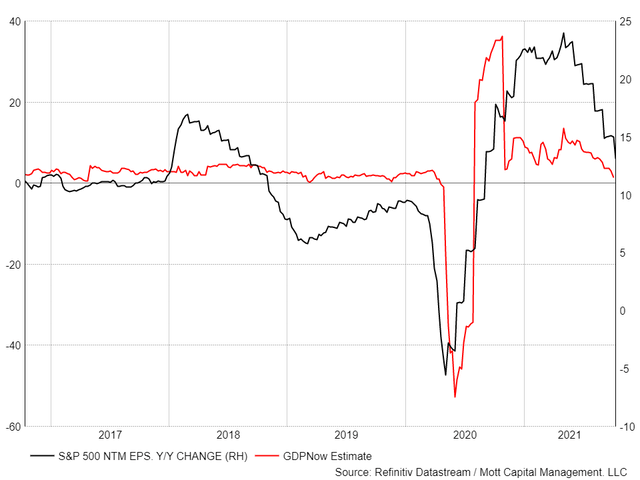 It's just a matter of when the stock market realizes that a Fed tapering event will push the dollar index even higher at the worst possible time resulting in a massive global growth scare. Perhaps the biggest reason why the volatility sellers have left the building.