The Fidelity Blue Chip Growth ETF (BATS:FBCG) is one of the more recent ETF options that has made its way into the increasingly competitive growth space where there are well over 250 options already. FBCG, which is essentially an actively managed ETF, looks to focus on large-cap names that exhibit above-average growth potential with sustainable business models. Crucially, the fund managers also look for events that could act as price triggers, such as turnaround situations, a change in management, product cycles, etc. The onus here is to focus more on bottom-up fundamental analysis over top-down fundamental analysis.

FBCG is a tricky ETF to evaluate due to its lack of ample trading history (FBCG was only listed in June 2020) and the fact that it belongs to this new breed of semi-transparent ETFs, where holdings are not disclosed on a daily basis. That said, there are some notable features that I'd like to highlight which don't make for particularly great reading.

As you can see from the image below, FBCG's expense ratio (0.59%) is above the asset class average (0.55%). Then, the trading volume linked to the ETF too is well below the norm; this lack of popularity gets translated into weak average spreads which could impact your fills if you're someone who likes to make short-term or tactical bets (FBCG's average spread % works out to 0.19%; contrast this with the SPYG, where the corresponding figure is much lower at 0.02%). I bring up the short-term tactical angle as FBCG appears to be an ETF where holdings are churned in and out quite frequently, as exemplified by a turnover ratio of 63%, which is twice as much as the asset class median of 30%. 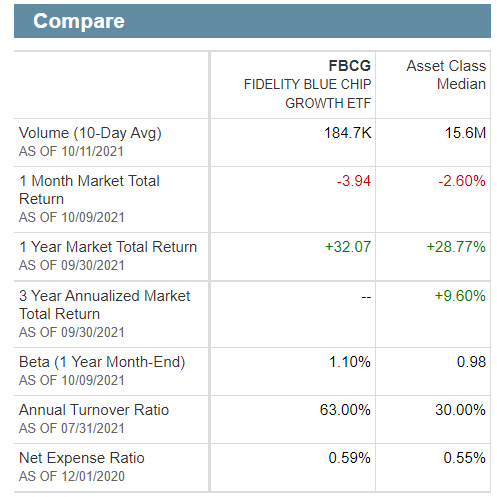 Then, as part of the ETF's promotional material, FBCG's managers also claim to target growth stocks where they feel "the market has mispriced the rate and/or durability of growth", but when it comes down to the brass-tacks, this is rather hard to reconcile when the weighted average P/E of the ETF works out to a hefty multiple of 32.65x. At a multiple of this sort, the scope of finding mispriced high-growth jewels is a tough sell. Incidentally, the constituents of the ETF are expected to deliver earnings growth that is nearly only half the multiple at 17.7%, which effectively represents a high price to earnings growth multiple of 1.9x.

Then, despite covering 308 stocks, the portfolio comes across as very top-heavy is dominated by the top-10 stocks (as per the most recently available data on 30th Sep), and in effect, the bottom 298 stocks account for less than 48% whilst the top-10, jointly account for over 52%.

Subscribers of The Lead-Lag Report would note that over these past few weeks, I've been urging participants to look beyond the S&P 500 as it is heavily skewed by a few tech names (22% of the index is made up by 5 tech names) whose market caps are at levels that don't necessarily justify their earnings potential. For instance, the likes of Apple (AAPL), Alphabet (GOOG) (GOOGL), Amazon (AMZN), and Facebook (FB) have an aggregate market cap that is well over all the stocks that constitute Japan's Topix market. Incidentally, the above-mentioned stocks also account for FBCG's top-five holdings. 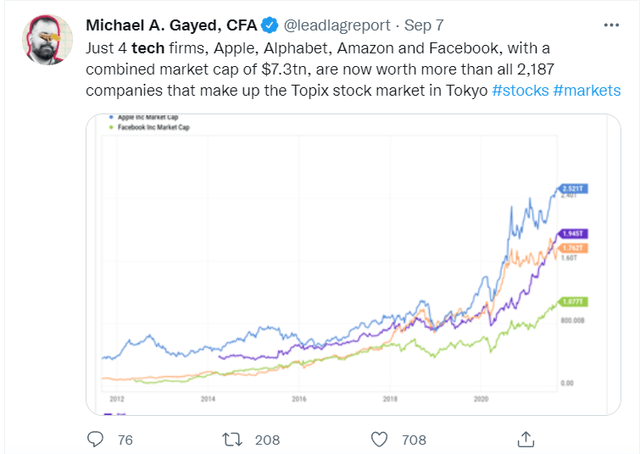 Listen, devouring these tech names (FBCG is incidentally heavily dominated by the tech sector which accounts for 41% of the total portfolio, 15% higher than the next biggest sector - consumer cyclicals) would have made sense in the era of easy money that has been prevalent for the past 12-18 months or so, but I believe we are now inching closer to the fag end of the loose money days; the Fed and the ECB have already laid out plans to ease their bond-buying programs, and the treasury market is also reflecting a likely pivot towards higher rates soon enough with the 10-year bond yields now closer to the 1.6% levels.

Conditions such as this are more beneficial for the cyclical and value-based counters of Financials and Energy and you're likely to see a rotation to those pockets at the expense of tech and growth, in general. As highlighted in the Leaders-Laggards section of this week's Lead-Lag Report, a ratio measuring the tech sector to the S&P 500 has turned weak recently and is on the cusp of breaking below the 20 DMA.

The main driver, of course, is the prospect of an elevated discount rate at which these growth cash flows get measured. When investors are prompted to pay a higher cost of capital, they also expect more bang for the buck from their growth stocks; whilst I don't expect any material slowdown in growth sector earnings, I'm not quite sure they can live up to their previously high standards particularly in light of a tougher base effect.

Also consider looking at the relative strength ratio of the broad value to growth segments, which is at very overstretched levels to the downside, currently trading close to record lows. If you believe mean reversion is an important facet of financial markets, surely at these levels, there's more utility in tilting to value options over growth options? 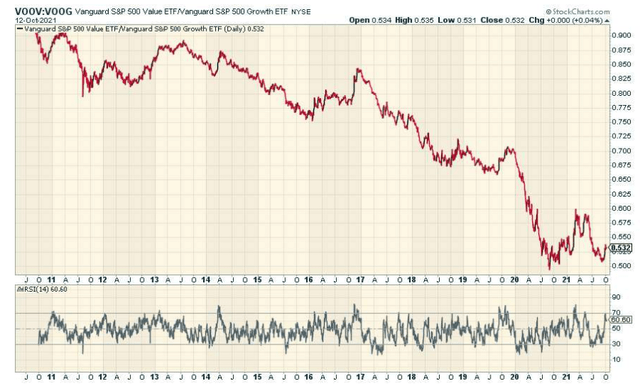 To conclude, the traditional growth sectors have enjoyed their time in the sun but I don't believe current conditions are the most salutary for them to flourish, and FBCG could remain susceptible.