Advanced Micro Devices (NASDAQ:AMD) had a great five-year run – from about $2 in early 2016 to over $100 in the last few months. A rather spectacular 50x run. Along the way, many analysts have doubted the company and called an end to AMD's stock run; and there is still a cottage industry of analysts who continue to call an end to AMD’s ascent. For long-term investors, none of the doubting analysts’ prognostications matters as long as the company continues to out-execute its peers. As such, investors should not mind much about catching dips in the stock but focus on the long-term prospects of the company. So, where is AMD likely to be a few years from now?

First, let us consider the current stock price of AMD. At the time of writing this article, AMD is trading around $105 with a trailing PE of about 37 and a forward PE of about 34. This valuation seems very low considering AMD’s recent revenue growth as can be seen in the image below. 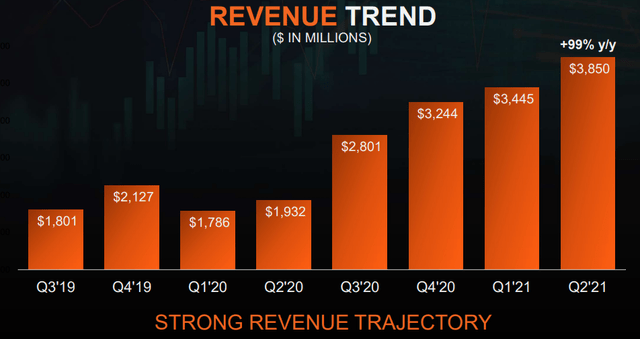 Where in this market do you get a technology company growing so spectacularly get a low 37 times trailing PE valuation? Why is there such a discount?

The Company’s low valuation, relative to the growth, is likely due to conservative management guidance and fear that arch-rival Intel (INTC) will fight back with a vengeance and take market share back from AMD at some point in the future. As far as management guidance goes, note that AMD started 2021 with a revenue growth guidance of 37%. After Q1, the Company updated its guidance to 50% growth. After Q2, the Company updated the growth guidance to 60%. Contrary to management guidance and analyst estimates, as far back as January, Beyond The Hype has indicated that guidance and consensus was, conservatively, light by about 25%! As the year passed, AMD’s prospects have only become stronger. Beyond The Hype now estimates that, during the Q3 earnings release, the Company will beat and raise and update the guidance once again to around 70% growth. The key to note here is that AMD’s guidance practices have been extremely conservative; if not ridiculous. This overly conservative guidance is, unfortunately, suppressing analyst consensus and the stock price.

The second aspect of undervaluation, the fear of Intel, is also largely baseless. Ever since AMD launched its Zen product line, the naysayers have been predicting Intel’s imminent counterattack. We are now five years into Zen, no such counterattack has materialized. Will it change in the foreseeable future?

To get a long term picture of the company, one needs to compare and contrast its product roadmap with that of its primary competitors Intel and Nvidia (NVDA). Unfortunately, roadmaps of these companies are governed by non-disclosure agreements and are not available from the respective companies. However, a considerable amount of information becomes available in bits and pieces through management commentary, leaks, and rumors. The following image shows one such compiled roadmap compiled from credible sources. 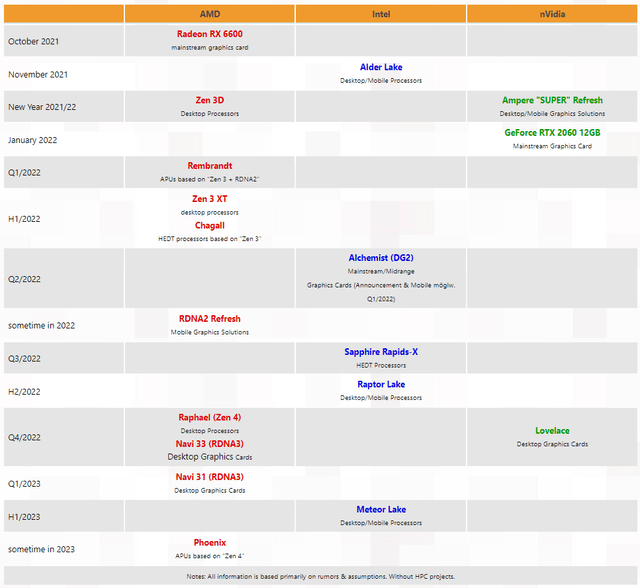 It is hard to decipher from this image how the products in this roadmap will compare with each other. However, there is a considerable amount of information to go along with these code names in the blogosphere. To make a long story short, the available information suggests that if Intel keeps to its roadmap, it will have somewhat of parity with AMD in laptop and desktop CPUs but will significantly lag AMD when it comes to server and workstation CPUs.

How exactly the roadmap plays out over time is almost entirely up to how well the companies will execute. Considering Intel’s process problems and with AMD execution being consistently good, the chances are high that Intel will underperform. Even if Intel does not underperform, the roadmap implies that AMD is likely to continue to increase its share moderately on the client front for years to come and likely to increase its share dramatically on the server front for years to come.

On the GPU front, AMD’s competitive position has improved significantly over the last few years. The current Navi2 generation, for example, is highly competitive with Nvidia’s RTX3 generation. Unfortunately for AMD, the Company has been severely supply-limited due to COVID-related and crypto-related demand and has been unable to take advantage of Navi2 relative performance gains. However, in 2022 and 2023, these are no longer likely to be issues and supply should be plentiful. What this implies is that AMD has a significant market share upside looking into 2022 and 2023. In context, AMD’s roadmap is compelling. At the minimum, AMD is likely to hold its own against Nvidia with its Navi3 generation of products. Here again, there is an opportunity for AMD to gain a significant amount of GPU market share.

While the roadmap is only till 2023, the implications go well beyond that. It typically takes several quarters for new products to ramp up. So, 2023 products are likely to drive not only 2023 but also 2024 revenues. In the meantime, the hourglass model continues to be the predictor of the future – with AMD fortunes rising and Intel’s and Nvidia’s falling.

The acquisition of Xilinx (XLNX) has been a drag on AMD stock price since the deal was originally announced as AMD significantly overpaid Xilinx investors due to poor deal terms. The arbitrage around the deal has also acted in a way to suppress AMD stock price for an extended period. However, as discussed in an earlier article, this deal is now about to close. Prior to the deal close, Xilinx stock is likely a significantly superior investment to AMD due to the large arbitrage discount on the deal (image below).

Once this deal closes, likely in a matter of a few weeks, the arbitrage action will end, and AMD stock is likely to move more freely without the Xilinx drag. Post Xilinx acquisition, AMD will be a larger company with higher gross margins and more scale and consolidation opportunities for further future earnings leverage.

As discussed above in the context of the roadmap above, AMD is now well situated competitively to continue its strong growth. AMD, within a few years, should have a much bigger chunk of the CPU and GPU markets with progressively higher-margin products. In addition, the Xilinx acquisition provides AMD with considerable new growth opportunities in the datacenter and telecom segments. AMD can also much more widely disperse its x86 and GPU IP through the Xilinx FPGA platform thus meaningfully increasing customer engagement.

The Company, with its IP deal with Samsung (OTC:SSNLF) has now indirectly entered the handset arena. AMD’s Radeon IP has a chance to meaningfully displace Qualcomm Adreno GPUs in the mobile handset market. Considering the large unit potential - 1.6B TAM worldwide - even a small share of this market could meaningfully add to AMD’s fortunes.

The primary risk to AMD, contrary to popular belief, is not Intel, but its own execution. For the foreseeable future, there is no sign that Intel will overwhelm AMD. The oft-discussed ARM CPUs are also not a meaningful threat to AMD as the likely share of ARM in both server and client markets is likely to be very low, in the single-digit percentage, for many years to come. The Company’s destiny is very much in its own hands. As long as AMD can execute well on the known roadmap, the Company will do well. There could be temporary near-term headwinds as COVID and crypto demand fades. However, even this is not a big concern as the strong growth in other parts of AMD should more than offset any such weakness.

Considering AMD’s recent growth, market share, and earnings momentum as well as the long term product roadmap, we would argue that analyst consensus (see image below) is absurdly low.

The analyst consensus is understandable given the management guidance. As the sell-side does not deviate much from spoon-fed management guidance, the consensus reflects the low 20% growth rate that the management has been guiding. As such, thanks to heavily sandbagged guidance, the company is likely to be in a beat-and-raise mode for many quarters to come – even if the company were to grossly underperform. However, given the product and competitive vectors discussed above, there is not much reason to think that the company will underperform. Earnings estimates are likely to jump substantially during the next several quarters including Q3 2021. While predicting the future especially with a choppy macro is risky, it is difficult to see AMD growing revenue less than 30% for the next few years. At that rate of revenue growth, earnings should accelerate much more, thanks to the leveraged nature of the semiconductor business model. Considering the revenue growth and earnings leverage, well over 100% growth in AMD stock over the next five years is likely. With strong growth in view, Beyond The Hype considers AMD the best semiconductor bet in the market today.

Subscribers to Beyond The Hype have access to all the linked articles that may otherwise be inaccessible. For timely, cutting-edge insights, analysis and investing ideas in technology, semiconductor, solar, battery, autonomous vehicles, and other emerging technology stocks, check out Beyond the Hype. This Marketplace service gives you early access to my best investing ideas, along with event driven and arbitrage opportunities when they are most edgy and actionable.

EnerTuition
9.74K Followers
Author of Beyond The Hype
Where emerging technology and truth converge.

Disclosure: I/we have a beneficial long position in the shares of AMD, XLNX either through stock ownership, options, or other derivatives. I wrote this article myself, and it expresses my own opinions. I am not receiving compensation for it (other than from Seeking Alpha). I have no business relationship with any company whose stock is mentioned in this article.

244 Comments
To ensure this doesn’t happen in the future, please enable Javascript and cookies in your browser.
Is this happening to you frequently? Please report it on our feedback forum.
If you have an ad-blocker enabled you may be blocked from proceeding. Please disable your ad-blocker and refresh.