The Problem With Renewables

The big problem with renewables used to be cost, but that is no longer the case. Now, in most of the world, wind or solar are the cheapest new construction, when measured by the levelized cost of electricity. This is a metric of the average cost of energy from a facility over its lifetime, including construction, operating expenses and consumables. 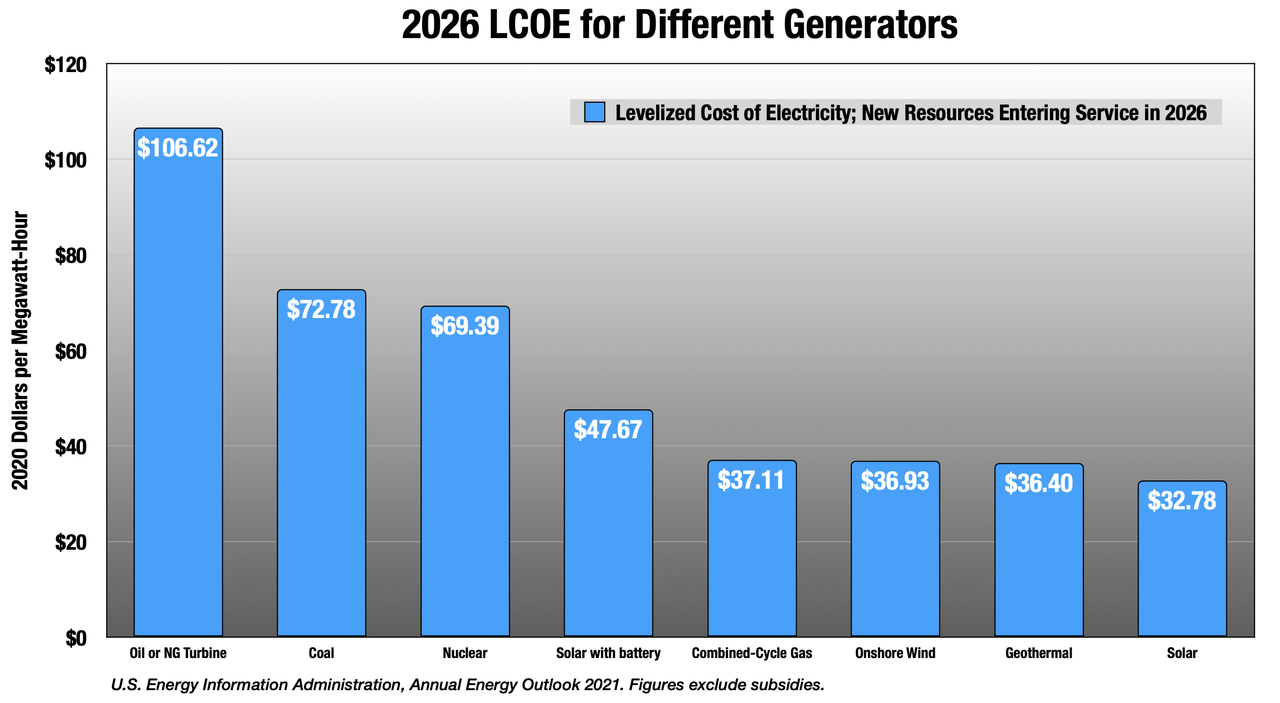 The largest solar installation in the word is currently at Bhadla Solar Park near Jaipur in India, and they have set records for the lowest price charged worldwide for wholesale electricity. In a purely free market, generators would primarily build new wind, solar and geothermal.

Recent events in Texas have really driven this home. Texas is a unique case with their own grid, and wind, solar, and fossil fuel resources only matched in the Arabian Peninsula. Right now, there is a ton of wind generation in Texas, but it keeps underproducing when they need it most — during demand surges. This is actually a more-or-less a daily occurrence in the summer. The wind blows mostly at night in Texas, when demand is not high in the summer. Here’s a summer month of hour-by-hour Texas wind generation data, when they had almost daily surges in demand over 60 kilowatt-hours: 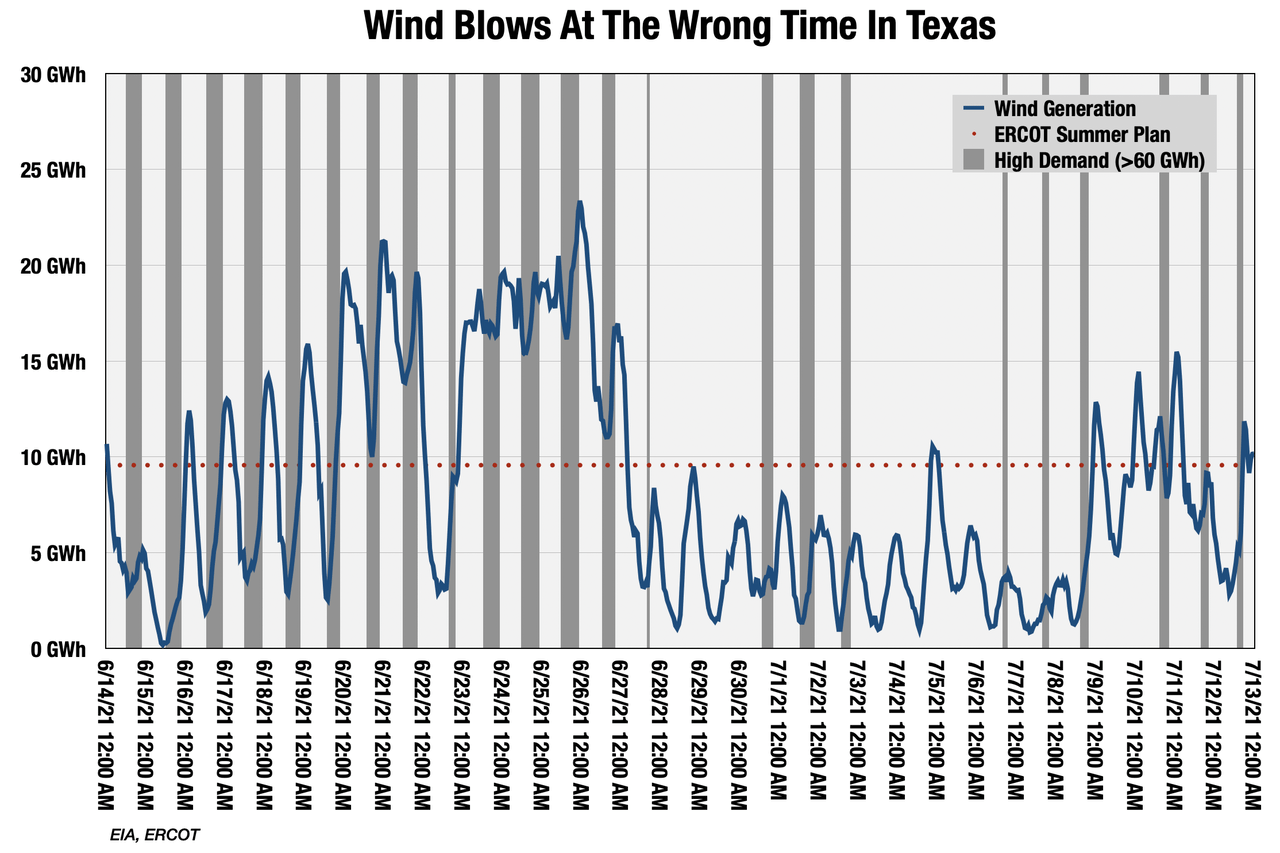 Only during one week did wind generation overperform the ERCOT Summer Plan during peak demand times. During a 9-day stretch, it underperformed the whole time. So wind is very cheap, and only getting cheaper. But we need to store the energy when the wind blows so it can be used when people want to use it. Texas makes up the difference with dispatchable resources, mostly natural gas. But energy storage can do the job better and cheaper.

The current solution is giant banks of lithium-ion batteries, but these should be viewed as a transitional technology, as they have lots of disadvantages in this use case:

Lithium-ion is still the best solution because for forty years now, the use case for batteries has been for mobile devices from laptops to smartphones to vehicles. The prime directive has been to make batteries smaller, lighter and more energy dense. Lithium is one of the most energy dense metals, so research has poured into lithium-ion and the more elusive lithium-metal chemistries.

But at solar and wind farms, especially the later, there is plenty of space and no need to keep energy storage light and mobile. What we see is a huge range of old technologies that had no near term commercial use case getting new life and capital. Almost all these companies are still private. I keep a list of now 66 energy storage companies, and half are still involved with lithium-ion. But that proportion keeps going down. Here’s a summary of the list. 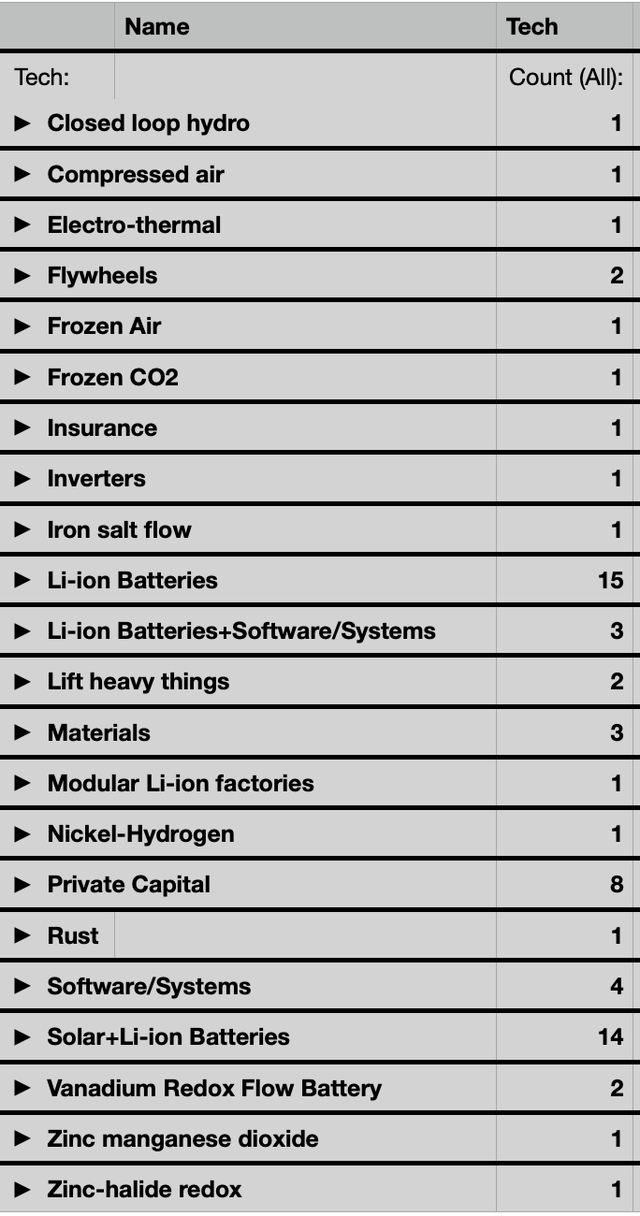 You can see there is a large ecosystem building up that includes financial aspects like private capital and performance insurance.

This article is about ESS Tech (NYSE:GWH), who make the iron salt flow battery in that list above. They went public on Tuesday this week via SPAC. The reception was welcoming.

I bought a little on that dip and already sold it by the time I sat down to write this article. I have an order in at $10, but I may change that. I believe that energy storage and managing it is the great blue sky opportunity in energy of the next 10-20 years.

Iron salt flow batteries are one of those old technologies being granted new life. Flow batteries use some sort of metal salt in an electrolyte solution in large vats that pass electrons back and forth. You can understand why this would be impractical for a phone or car. But it makes a lot more sense for energy storage at a wind or solar farm.

ESS has a containerized battery with a maximum 90 kW/600 kWh capacity, so you would need a lot of these to replace a large lithium-ion install. Vistra (VST) has the largest lithium-ion battery right now at Moss Landing, California and that is 300 MW/1,200 MWh. You would need about 3,300 of these containers to equal the Moss Landing installation, which would be about 18 acres if you stacked them 2-high. This is a lot of space, but in the context of a wind or solar farm it’s very doable.

So the disadvantage is the space needed for these things. But they have a lot of advantages over lithium-ion batteries for utilities:

The land use issues are challenging when you get into very large installations but very much doable, especially stacked two-high. Let’s talk about the Bhadla Solar Park at 2.24 gigawatts of nameplate capacity — what it can produce under ideal conditions. Currently, that all gets consumed in a 6-10 hour period when it is mostly produced. For most of the day, solar is producing nothing, and of course there are cloudy days.

So let’s think of what is needed for a full 24 hours in winter, when it is only producing at high levels for about 6 hours a day. In this scenario, we store 75% of capacity for the rest of the day. That means about 17,000 batteries, which would fill up 180 acres, or 90 acres stacked two-high. 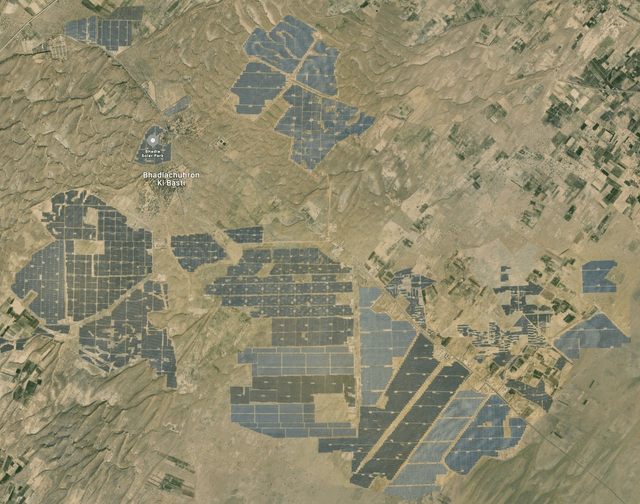 As you can see from that satellite photo, there is plenty of space for that at Bhadla.

But despite its superiority to lithium-ion batteries for energy storage, I see other problems:

Still, there are a lot of things to like about the ESS battery. It is clearly a better solution than lithium-ion. It fills the medium-term 10+ hour battery hole, and the 10-year insurance policy may help with the risk calculations on the utility side. I will continue to look for opportunities to buy.

I’m not going to bother with ESS financials. This is a company that starts their operating statement with expenses, as they have no revenue. Going SPAC capitalizes them to the tune of over $200 million in the worst-case (and most likely) scenario, and they run a pretty lean operation, only burning $15 million in H1 2021, including one-time SPAC expenses.

A renewable generation future looks more likely every day, because even absent subsidies, the cheapest power is coming from renewable sources now. That will only get more lopsided as time goes on. Managing that generation so it is dispatchable and resilient to climate events like we have seen recently is the next great challenge, and storage is the cornerstone of that, along with systems and software to run it all. Wind and solar are very crowded now, and there are a lot of bulls chasing that red flag, which is one of the reasons for the dramatic price declines. My favorite plays there are in construction, like Mastec (MTZ). I believe that energy storage and managing it is the great blue sky opportunity in energy of the next 10-20 years.

This is a huge challenge if we are to shift something like 75% of generation to renewables by 2035. I recently watched the webcast of the Energy Department’s StorageShot Summit. StorageShot was part of the 2020 Energy Bill. It allocated $343 million for the National Labs to work with private industry and universities on 10-hour, multiday and seasonal storage solutions that are safe and environmentally friendly. The ESS battery fills at 10-hour hole very nicely, but that is ultimately an intermediate phase.

The big challenge is testing and validation on a compressed timeline. People are looking at 2030 as a hard date for mass deployment to begin at the latest. That is a lot closer than it sounds when you are trying to test and validate 30-100 year resources.

So the Energy Department is working hard on speeding up the testing and validation process. They have a wide range of solutions they are developing for this, including the Battery Abuse Lab at Sandia National Lab, which sounds like a fun place to work. But the big initiative is developing open source AI software and data sets to accelerate the testing process.

Anyway, we now have four public energy storage companies, and Energy Vault (NXU) joining them soon via SPAC. Next week, I will be launching my new marketplace service here at Seeking Alpha, Long View Capital. I will be covering long term trends like energy storage and the companies involved, with targeted portfolios to help investors take advantage. Look for an announcement next week.