Enel Chile (NYSE:ENIC) was a company that we misjudged some months ago. We thought that while supply side issues were an issue, a likely partial reversal in commodity prices should recover some of the declines that rallies had caused in the value of PPAs. Moreover, a recovery in the USD relative to the Chilean Peso should have also helped things out. It became evident that these price reversals were not going to happen, and worse, copper in particular stayed strong due to the renewable energy push, levitating the Peso. While a wake-up call to underinvestment in fossil fuels might mitigate the imminent copper demand due to the renewable push, the pressures remain for the Enel Chile generation business. The regulated businesses will also be coming up against new tariff decrees, and the Spanish attitudes towards punishing utilities sets a bad precedent for Chile which has become more socialist. Despite all this, Enel Chile has traded down so intensely that we maintain our small position thanks to a covered dividend and the belief that, save nationalization, things can't get much worse after the coming quarters.

The situation with commodities and FX is the main reason why Enel Chile's results have declined, and therefore also their stock. Our house view is that it'll be till the beginning of 2025 that we will see declines in commodity prices that are reversals in the supply side inflation, as demand for goods has increased permanently at the expense of services thanks to COVID-19. 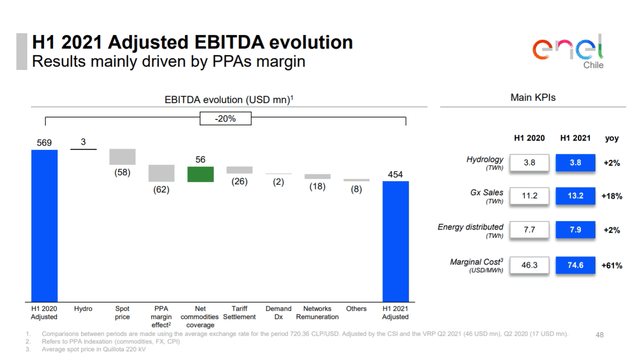 The Enel Chile purchase price agreements are negatively indexed to the prices of oil, commodities in general, and the valuation of the Chilean Peso. This margin has already been struck substantially in H1 2021 relative to last year due to the phenomenal rally in commodities from COVID-19 lows and then some due to ongoing supply constraints. The reason why markets have taken such a harsh view on Enel Chile is because these supply side constraints will persist for a while, likely till 2025 as we believe, and every aspect of the PPA indexation is unfavourable at the moment.

Infrastructural works and general increase in bulk trade is resulting in substantial increases in oil prices as well as all other commodities. In particular, green energy pushes and electrification are pushing up the prices of copper. Indeed, even Enel's (OTCPK:ENLAY) own Enel X initiatives across its subsidies, including Enel Chile, are evidence of this. While the PPAs are already indexed negatively to higher commodity prices, with Chilean exports relying substantially on copper demand, the Peso will also remain levitated. Essentially, all vectors point unambiguously towards further declines in Enel Chile's EBITDA.

Another issue, albeit more divorced from the situation in commodities, is the tariff schemes that Enel Chile are remunerated with in their distribution and transmission operation. 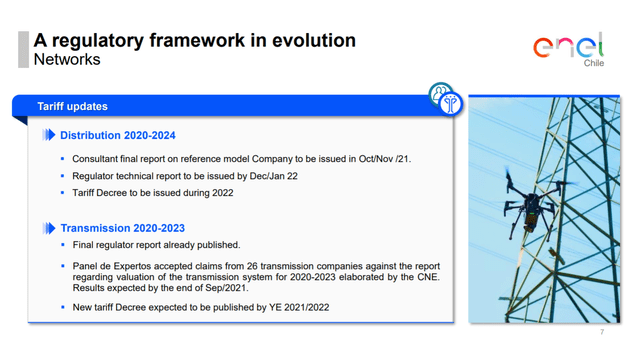 These revenues tend to be very resilient, except at juncture points when the remuneration schemes are reparameterized by the government. These junctures are coming up in 2023 and 2024, so not too far off. Low relative interest rates compared to pre-COVID are going to be a negative driver for how these schemes are reconstituted. The bigger issue, however, is the fact that Chilean utility prices have become extremely high, and the government has already shown willingness to enforce utilities to grant clemency on delinquent bills. With even Spain doing similar things with its 'shock plan', we think that there is reason why the Chilean government could go further in reducing remuneration, which is has the power to do almost unilaterally, for operators of the grid. The government, ever since the fiasco with public transport fares and the turnstile revolution, has essentially been reconstituted into a socialist one, indeed with the country's constitution also in the process of being redrafted. It's not that good of a moment to have to argue that Enel Chile, a private company, should be paid at least as much if not more than before. Our outlook on the regulated business is therefore tentative, although huge annual declines of more than 5% over the next period, taking the annual 2% decline imposed on Spanish grid operators as a comp, are not very likely.

Despite possible hits to regulated revenues too, it is an anchor for the results where the generation business is getting hit badly by indexation. Unfortunately, the duration of these PPAs are much longer than the likely horizon for constrained commodity prices. 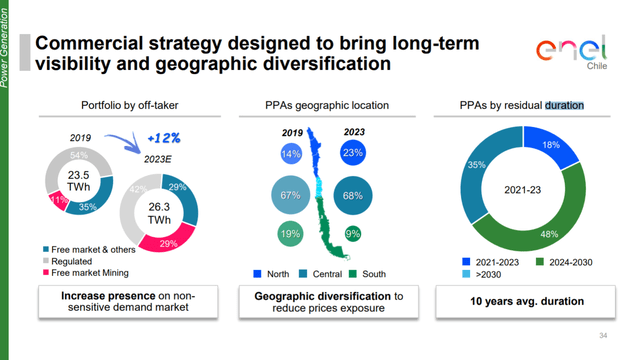 Essentially, Enel Chile is going into a bit of a depression in the next couple of years, with income likely to trough next quarter, wallowing till about 2024-2025. Since the price has declined so substantially already, and since Enel Chile will still pay a dividend yield on our purchase price of about 4-5% (based on a 50% payout policy), we are relatively alright with hanging onto the position and tracking the situation for a few years. We feel that as the markets forget that Enel Chile ever looked attractive, the price should remain low even just before an inevitable turnaround, save profound impairment on account of the Chilean government's socialist leaning initiatives. Collecting a 5% annual dividend for a few years with a view to triple or quadruple our position around 2023, is the strategy we are currently taking with this small portion of our portfolio. Good luck to all.

If you thought our angle on this company was informative, you may want to check out our service, The Value Lab. We focus on long-only value strategies, where we try to find international mispriced equities and target a portfolio yield of about 3-4%. We've done really well for ourselves over the last 5 years, but it took getting our hands dirty in international markets. If you are a value-investor, serious about protecting your wealth, our group of buy-side and sell-side experienced analysts will have lots to talk about. Give our no-strings-attached free trial a try to see if it's for you.

Valkyrie Trading Society
2.92K Followers
Author of The Value Lab
A long-only voice with eclipsing growth through 2020 and 2022 bear markets.

Disclosure: I/we have a beneficial long position in the shares of ENIC either through stock ownership, options, or other derivatives. I wrote this article myself, and it expresses my own opinions. I am not receiving compensation for it (other than from Seeking Alpha). I have no business relationship with any company whose stock is mentioned in this article.