BHP Group (NYSE:BHP)(BBL) and its peers benefit from high commodity prices for iron ore, copper ore, etc. The company is shareholder-friendly, shares are inexpensive due to overblown China worries, and with tailwinds from a global electrification and EV push, BHP could have considerable long-term upside potential.

BHP's Stock: Up And Down

BHP Group is one of the largest mining companies in the world, with its operations being diversified across iron ore, copper, petroleum, and metallurgical coal. 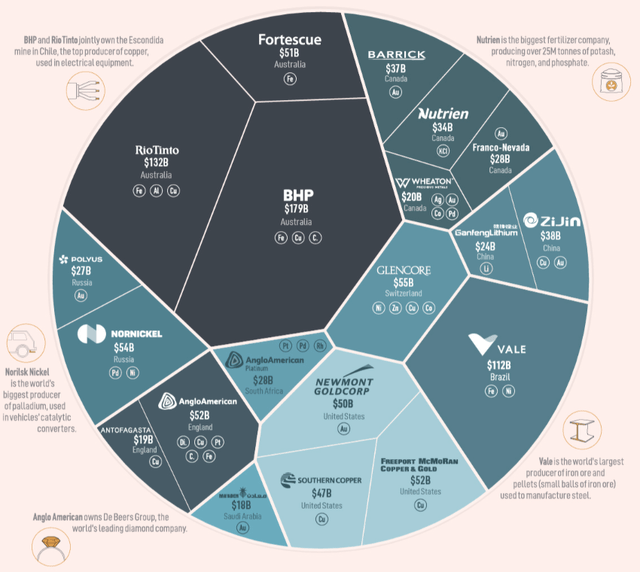 During the last fiscal year, which ended in June 2021, these four business units generated the following EBITDA: 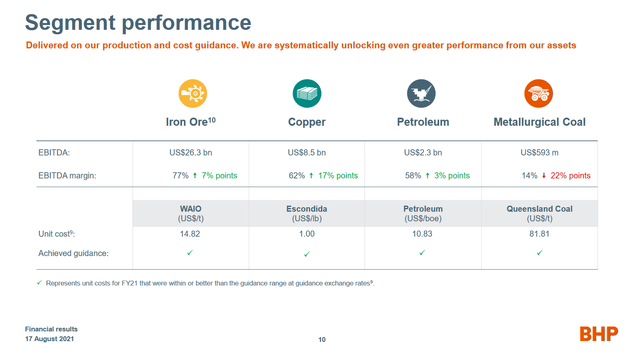 Iron ore has contributed about 70% of company-wide EBITDA during the year, with copper contributing about 25%. Petroleum and metallurgical coal did not generate especially high profits, which can, at least when it comes to the Petroleum franchise, be explained by the weak oil price environment during most of that year. With oil prices rallying quite a lot over recent months, it seems pretty likely that BHP's Petroleum business will generate better results during the current fiscal year.

Due to its significant iron ore exposure, BHP's share price is impacted by news centered around that commodity to a significant degree. Its shares peaked at a little above $80, where shares traded in March, May, and July. Since then, however, shares have declined quite a lot, dropping by as much as 35% before bottoming at $53 in early October. That share price decline was driven by news out of China -- apparently, the country's government decided to curb steel output, which resulted in a weakening price for iron ore. Possible explanations for the steel output curb are worries about air quality ahead of the Winter Olympics games in Beijing in 2022. Others believe that this news item was intended to drive down iron ore prices in order to reduce costs for China-based steel manufacturers, without any real intent to lower steel output. Iron ore prices dropped to below $100 per ton for a short period of time, but pretty quickly the market price for the commodity recovered by around 50% from September's lows. Earlier this year, iron ore spot prices were even higher (at more than $200 per ton for a short period of time), but it was pretty clear that this wouldn't be a sustainable price. At current prices well north of $100 per ton, BHP and its peers are still generating massive profits -- as we can see in the above slide, unit costs for BHP's iron ore are in the $15 per ton range.

The steep share price drop we have seen over the last 2-3 months thus seems overblown -- BHP will remain massively profitable with iron ore trading where it trades today, and the picture for other commodities is even better. Copper prices, for example, have recently climbed back to $10,000 per ton, which pencils out to a profit margin in the ballpark of 80% for BHP, which produces copper at a unit cost of $1 per lb at Escondida -- the largest copper mine in the world: 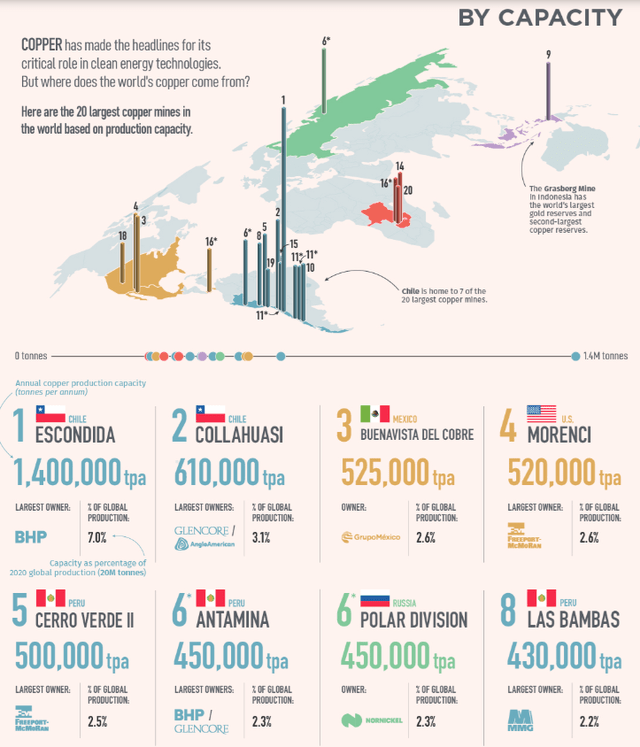 Escondida produces more than twice as much as the next-best mind, Collahuasi, which is also located in Chile.

At $57 for BHP and $55 for BBL (which is the better choice for most investors, more on that later), BHP Group is trading very inexpensively.

Shares are valued at a little less than 10x forward earnings, while the EV to EBITDA ratio, which accounts for debt usage and cash on the company's balance sheet, rests at an incredibly low 3.8 -- oftentimes, EV to EBITDA ratios of less than 10 are seen as inexpensive. BHP's peers are mostly trading at inexpensive valuations as well, thus this is not a company-specific thing. Instead, it looks like the market is underappreciating base materials companies across the board -- we even see inexpensive valuations at many energy names. This can be explained by factors such as base materials or commodities being less attractive/exciting than tech, for example. The exposure to the Chinese economy, which remains the biggest commodity importer in the world, is another reason that makes some investors shy away from BBL and its peers. Last but not least, ESG concerns could prevent some from investing in mining giants such as BHP Group. This is, however, an overblown worry, we believe. In fact, BHP Group and its peers are highly important for global electrification efforts and a wide-scale push for lower CO2 emissions. Electric vehicles do, for example, contain more copper than comparable ICE-powered vehicles, and the charging infrastructure that is needed to power millions of EVs needs to be built out globally, requiring massive amounts of copper as well. Similarly, getting rid of large-scale power plants such as coal-fired plants and replacing them with many smaller-scale plants, such as solar panels and windmills, requires additional investments in electric grids -- those will, in turn, lead to higher demand for both copper and steel, all else equal. BHP could thus ultimately turn out to be a winner in a global push-for-zero scenario, as ESG mandates and ESG investments might benefit its business more than many expect. BHP is positioning itself accordingly, for example through a new nickel sulfate plant that will supply nickel to Toyota (TM), which will use the material to build EV batteries.

BHP Group's longer-term outlook is thus pretty good, we believe, as its materials will mostly be used for many decades. Metallurgical coal might be replaced by hydrogen at some point, although even that is years away -- and metallurgical coal was responsible for just 1% of BHP's EBITDA last year, anyways.

BHP Group has cleaned up its balance sheet very successfully over the last couple of years:

With barely any net debt left, BHP has moved to a more shareholder-focused approach when it comes to capital deployment. The company's first priority, of course, is maintenance capital expenditures, which are needed to keep the company's mines working. Those did eat up less than 10% of the company's operating cash flow during the last year, however, which leaves a lot of room for additional cash usage: 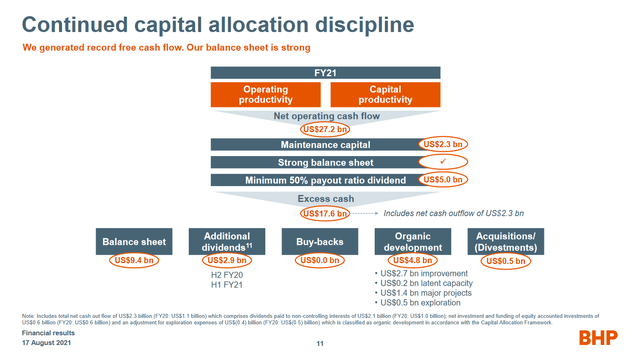 BHP has promised to pay out at least 50% of the company's profits in the form of dividends, and BHP Group decided to make additional cash dividend payments of $2.9 billion in fiscal 2021, for a total payout of $7.9 billion. This translates into a dividend yield of 9.3% based on a current market capitalization of $85 billion.

BHP Group also decided to spend several billions of dollars on what it calls organic development, which includes investments in new assets, and investments that seek to increase productivity at existing mines. With net debt at close to zero by now, BHP Group will likely ramp down deleveraging further in coming quarters, and investors could see more additional dividend payments or buybacks. We do believe that, at current valuations, share repurchases would be value-accretive, as shares trade with an earnings yield of more than 10%, which results in attractive returns for buybacks at the current valuation levels.

Both BHP and BBL represent the same company, BHP Group, but they do differ to some degree. BHP shares represent the Australian version (BHP Group Limited), while BBL stock represents UK-based shares (BHP Group plc). Generally, BBL is the better choice for most investors, due to a lower share price, while dividends are the same for both tickers. The discount of BBL versus BHP has shrunken over the last year, however, which means that it has become less important to make a distinction:

BBL has gained almost 20% relative to BHP over the last year, based on news that the company plans to unify its corporate structure. For now, however, BBL still trades at a discount, which makes it the more favorable choice. Dividends for the BBL ticker are not taxed, as there is no withholding tax in the UK.

Investors get a juicy dividend yield, and with deleveraging efforts completed, BHP Group might decide to ramp up share repurchases going forward. The opportunity in BBL, relative to BHP, has mostly materialized, but BBL still trades at a small discount, which makes it the better choice for most investors (everyone that can't utilize the tax credit on the Australian shares).

BHP Group is an inexpensive, cash-flow-rich, shareholder-friendly company that should benefit from the ESG narrative due to the fact that decarbonization will be a tailwind for global demand for copper, nickel, etc. while iron ore, BHP's biggest unit, will remain a huge cash cow for many years.

Is This an Income Stream Which Induces Fear?

The primary goal of the Cash Flow Kingdom Income Portfolio is to produce an overall yield in the 7% - 10% range. We accomplish this by combining several different income streams to form an attractive, steady portfolio payout. The portfolio's price can fluctuate, but the income stream remains consistent. Start your free two-week trial today!

Jonathan Weber
45.56K Followers
Author of Cash Flow Club
The Investment Community where "Cash Flow is King"
According to Tipranks, Jonathan is among the top 1% of bloggers (as of July 24, 2022: https://www.tipranks.com/bloggers/jonathan-weber).

Disclosure: I/we have a beneficial long position in the shares of BBL either through stock ownership, options, or other derivatives. I wrote this article myself, and it expresses my own opinions. I am not receiving compensation for it (other than from Seeking Alpha). I have no business relationship with any company whose stock is mentioned in this article.