Asana (NYSE:ASAN) has risen around 60% since I last covered the company. The stock was a Best of Breed pick in February of this year, and delivered strong returns until when we sold. I did not anticipate the stock to perform this well, however. The stock has risen at an incredible rate - even after we closed out our positions, which on one hand can be considered directionally justified on account of the strong financial performance, but on the other hand appears far overdone, even when assuming aggressive expectations. ASAN has all the makings of being yet another dominant enterprise software company, but the current valuation has already priced in the dominance, setting up current shareholders for inevitable disappointment. While not quite a short, the risk-reward has been skewed heavily to the downside.

ASAN came public via direct listing and closed its first day of trading just under $29 per share. The stock has been a star performer ever since, returning over 348% to present day.

Much of that gain occurred in only the last few months, as can be seen by the exponential trajectory above. Oftentimes, strong moves upwards are justified by the fundamentals. However, it is also common for the rally to become overdone, as is the case with ASAN. The stock has become dangerously overvalued, setting up current investors for a very risky future.

What are we working on now? Who is working on what? What is the longer term picture we are working towards? What is our efficiency? These are the types of questions that ASAN’s product helps answer. ASAN believes that it is addressing a large and growing $50.7 billion opportunity (estimated as of 2025). 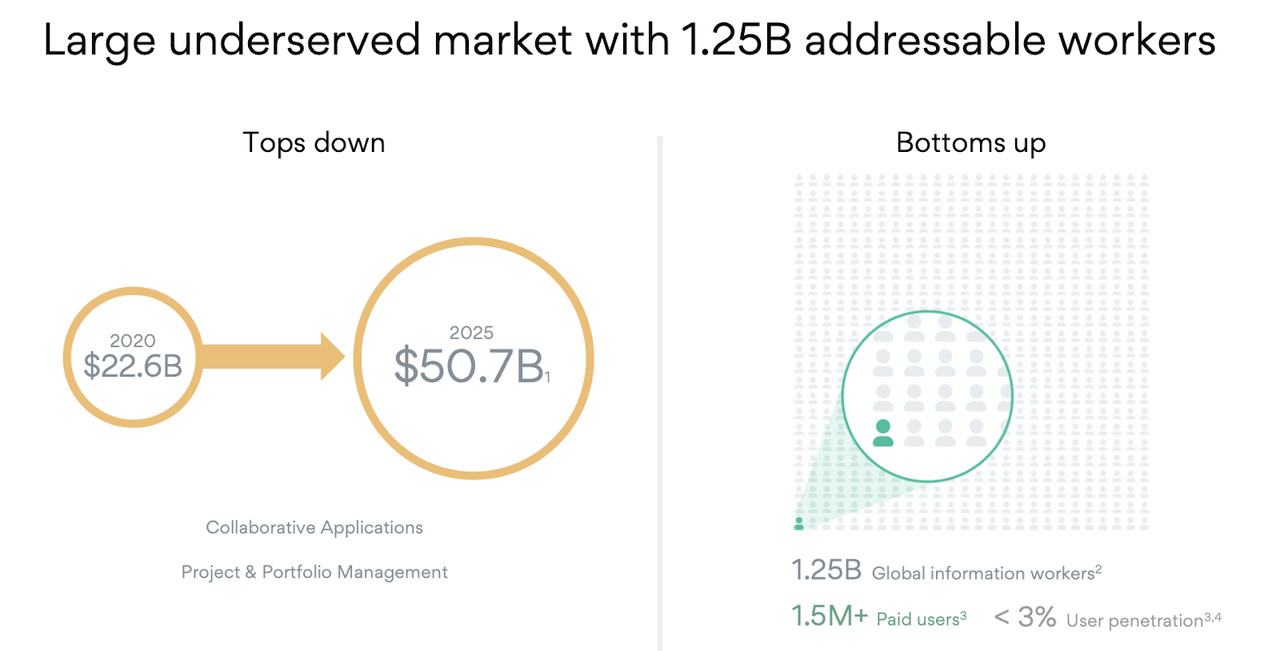 ASAN’s financial results validate why the stock has been such a strong performer, at least directionally. ASAN saw revenues grow by 72% year over year - the 3rd consecutive quarter with accelerating growth. 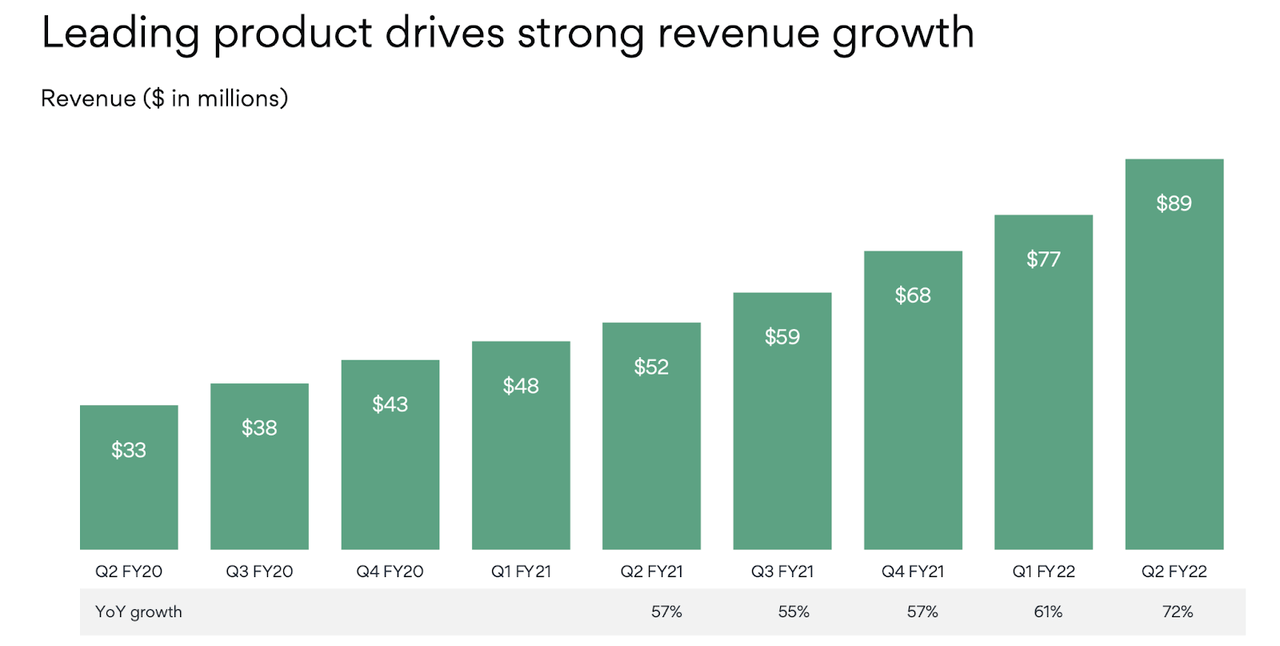 For reference, ASAN has had four quarters since coming public, and saw mild deceleration in its first quarter (55% vs 57%). Deceleration is normal - acceleration is not, explaining how ASAN has been able to generate incredible returns. It is possible that Wall Street is expecting continued rapid growth due to an interesting observation regarding dollar based net retention rates (‘DBNRR’). ASAN saw its highest DBNRR from customers who spend more than $50K annually.

It just so happens that those kinds of customers are growing most rapidly at 111% as of the latest quarter.

This strong performance is clear validation of ASAN's product, and suggests that ASAN may be able to take market share in the coordination market segment.

There’s finally another thing propelling the stock. After buying over $150 million in stock in June, CEO Moskovitz has purchased another $123 million in September and October, cumulatively. The typical saying goes that there are many reasons why insiders might sell a stock, but only one reason why they would buy a stock. Moskovitz’s latest round of buying occurred with ASAN trading around $100, which was already over 200% higher than its first day of trading.

Is Asana Stock A Buy, Sell, or Hold?

Unfortunately, it appears that the good times must come to an end. After the strong price performance, ASAN is trading at an astonishing 60x forward sales.

60x sales against a 58% projected growth rate is not a great setup - and ASAN isn't even yet profitable.

If we assume that ASAN eventually does show operating leverage and is able to achieve 30% net margins - which is arguably very aggressive - then we can estimate fair value. Wall Street consensus estimates appear reasonable, but let’s instead assume 50% growth next year. I assume ASAN grows at 42.6% in 2023 and 29.44% in 2024, similar with the Street, but with the years reversed. We arrive at $1.3 billion in revenues for 2025 - the stock is trading at 16.7x that estimate. The company will likely dilute shareholders by around 3% annually, but we can ignore that to prove this point. If we assume that ASAN trades at a price to earnings growth ratio (‘PEG’) of 2x, then it might trade at 18x sales by 2026. That represents only 7.8% upside over the next four years, for an annualized return of 1.9%.

Am I being too conservative? Let’s instead assume 40% long term net margins - that would place the company at an elite level rivaling the likes of Facebook (FB) and Adobe (ADBE). In this case, ASAN might trade at 24x sales by 2026, suggesting upside of 44% over the next four years, for an annualized return of around 9.5%. While that kind of return should beat the broader market, the potential return does not fit the anticipated risk. I might have been content with such a potential return if ASAN was deeply cash flow positive and there was a complete lack of better investment alternatives, but neither of those conditions are true.

ASAN is technically not a “bubble” because I do anticipate positive shareholder returns if the holding period is long enough, but the valuation appears bubbly due to the high likelihood of poor annualized returns. Investors are likely to find better opportunities elsewhere, even (or especially) elsewhere in the tech sector.

For more coverage of undervalued growth stocks, including my top picks, consider subscribing to Best of Breed.

My portfolio includes over 20 stocks that I think will absolutely crush the market over the next decade.

Disclosure: I/we have a beneficial long position in the shares of FB either through stock ownership, options, or other derivatives. I wrote this article myself, and it expresses my own opinions. I am not receiving compensation for it (other than from Seeking Alpha). I have no business relationship with any company whose stock is mentioned in this article.