The self-driving technology sector is one of the hottest areas for investment, but the SPAC pathway to the public markets isn't rewarding shareholders in the short term. Market leader Aurora Innovation agreed to a business combination with Reinvent Technology Partners Y (RTPY) back in July and the recent price isn't suggestive of a great outcome to the de-SPAC transaction. My investment thesis is Neutral on the stock until after the deal is done, especially at this valuation.

Though this deal hasn't gotten much attention due to the recent weakness in SPACs, the Aurora Innovation deal is one of the largest. The agreed upon terms valued the self-driving tech leader with an equity value of $11 billion with goals of raising $2 billion via the transaction placing the implied stock valuation at $13 billion.

Reinvent Technology Partners Y has ~$1 billion in the trust with a planned PIPE deal of $1 billion funded via impressive Wall St. institutions like T. Rowe Price, Fidelity Management and Sequoia Capital. The transaction involves Aurora shareholders holding 84% of the outstanding shares and founders having shares locked up for up to four years or until the stock crosses at least $15.

On the surface, the deal valuation is appealing with where Waymo (GOOG, GOOGL) and Cruise Automation (GM) have completed funding deals. Both of these autonomous technology platforms have reached recent deals or market valuations placing those firms in the $30 billion valuation range. 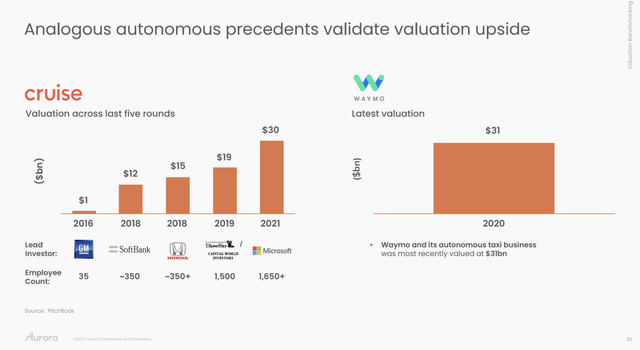 Reinvent Technology Partners has already taken urban air mobility firm Joby Aviation (JOBY) public via a de-SPAC transaction a few months back. Joby is focused on building mobile, electric aircraft with a path to autonomous flying, but the stock now trade slightly below $9.

The company has a similar business plan of scaling up revenues in the mid-2020s timeframe in a negative indication of current public markets demand for venture capital type investments. Aurora might have reasons for a similar valuation as Waymo and Cruise, but the stock market isn't currently found of stocks with a valuation targeted at 5.3x 2027 revenues.

The company is developing an L4 autonomous driver system to power multiple vehicle types to include passenger vehicles and Class 8 trucks. The market opportunity in autonomous driving is enormous with trucking, ride-hailing and local goods delivery accounting for a U.S. transportation market approaching $1 trillion while the technology will ultimately be utilized globally.

Aurora was founded by executives from Waymo, Telsa (TSLA) and Uber (UBER) focused on self-driving systems. The company bought the Advanced Technologies Group from Uber in 2020 giving the ride-hailing business a 26% ownership position in Aurora.

A lot of the autonomous driving market attention is on the ride-hailing market due to Uber, Waymo tests in Arizona and auto pilot technologies from Tesla, but the initial focus of Aurora is trucking. The trucking market relies heavily on highway miles with predictable paths and a lack of workers allowing for early adoption. The company plans to begin with highway networks in Texas during 2024, quickly expanding around the U.S. through 2030. 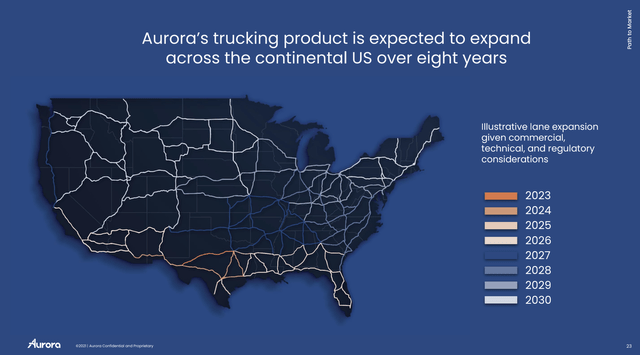 The company plans to offer a subscription model to allow companies to quickly shift to the Aurora Driver platform without a huge upfront investment. The plan switches out the cost of a driver for a much cheaper technology platform saving the trucking company far more money than the costs of the previous driver while allowing for rapid scaling of services unlike the current shortage of up to 60,000 drivers.

Aurora plans to charge a fee per mile in a Driver-as-a-Service business model providing customers with the hardware and software for Aurora Driver. The truck fleet will be owned by a third party.

The company plans to exit the SPAC deal with $2.5 billion in cash on the balance sheet, but a lot of SPACs have large redemptions when the stock price trades below $10 heading into deal close. The biggest is the Joby Aviation example where the stock struggles with revenue not reaching material levels for years.

Aurora forecasts 2026 revenue surging to $622 million with a massive EBITDA loss of $555 million. In prior years, the company forecasts minimal revenue and very large losses. The company only reaches 10% EBITDA margins in 2027 when revenues reach $2.0 billion based on nearly all revenues coming from the $1.9 billion trucking business. 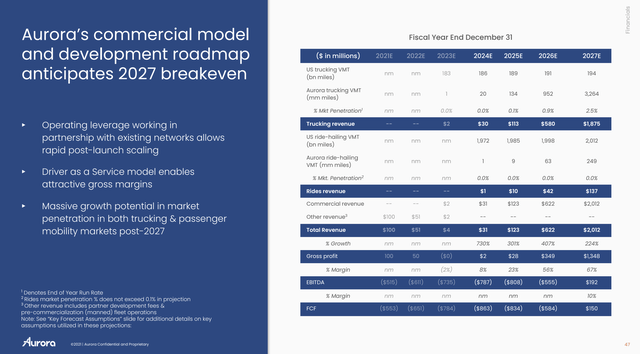 The key investor takeaway is that the stock action doesn't appear promising under this scenario. Aurora Innovation has strong technology in the autonomous driving area, but the public market doesn't appreciate these type of growth stories. At the least, investors should avoid the stock until after the transaction closes and the stock likely tracks below $10 for a period of time.

If you'd like to learn more about how to best position yourself in under valued stocks mispriced by the market with substantial upside potential, look into joining Out Fox The Street.

The service offers model portfolios, daily updates, trade alerts, advance copies of key public articles and real-time chat. Sign up now for a Limited 30-day Money Back Guarantee to start finding the next stock with the potential to generate excessive returns over time without taking on the out sized risk of high flying stocks.

Stone Fox Capital
39.45K Followers
Author of Out Fox The Street
Out Fox the market with misunderstood, high reward opportunities
Stone Fox Capital Advisors, LLC is a registered investment advisor founded in 2010. Mark Holder graduated from the University of Tulsa with a double major in accounting & finance. Mark has his Series 65 and is also a CPA.

Disclosure: I/we have a beneficial long position in the shares of GM either through stock ownership, options, or other derivatives. I wrote this article myself, and it expresses my own opinions. I am not receiving compensation for it (other than from Seeking Alpha). I have no business relationship with any company whose stock is mentioned in this article.

Additional disclosure: The information contained herein is for informational purposes only. Nothing in this article should be taken as a solicitation to purchase or sell securities. Before buying or selling any stock, you should do your own research and reach your own conclusion or consult a financial advisor. Investing includes risks, including loss of principal.