Welcome to the October 2021 cobalt miner news. The past month saw good news relating to Australia as a possible future cobalt source as well as signs China has been thrifting cobalt use in NMC and also shifting more towards LFP batteries. Despite this, the long-term outlook for cobalt remains solid, as Fastmarkets stated: "Strong growth for cobalt, but some headwinds too."

As of October 22, the cobalt spot price was slightly higher at US$25.45/lb, from US$24.04/lb last month. The LME cobalt price is US$55,610/tonne. LME Cobalt inventory is 271 tonnes, down slightly from last month's 280 tonnes. More details on cobalt pricing (in particular the more relevant cobalt sulphate), can be found here at Benchmark Mineral Intelligence or Fastmarkets MB. 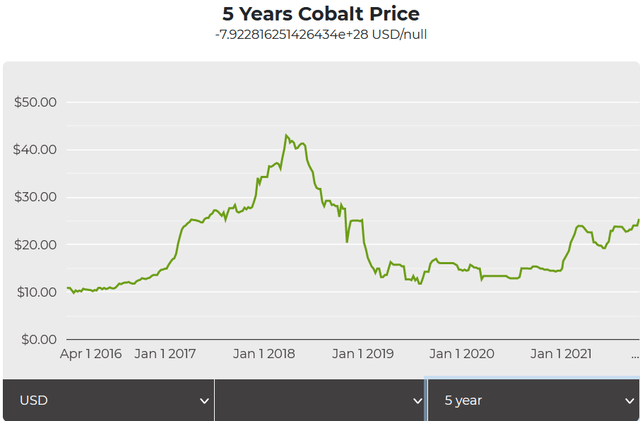 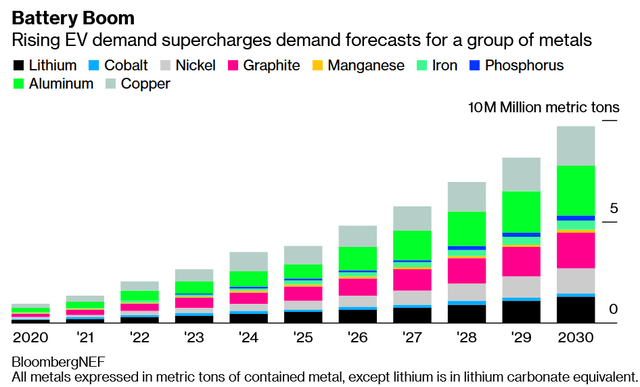 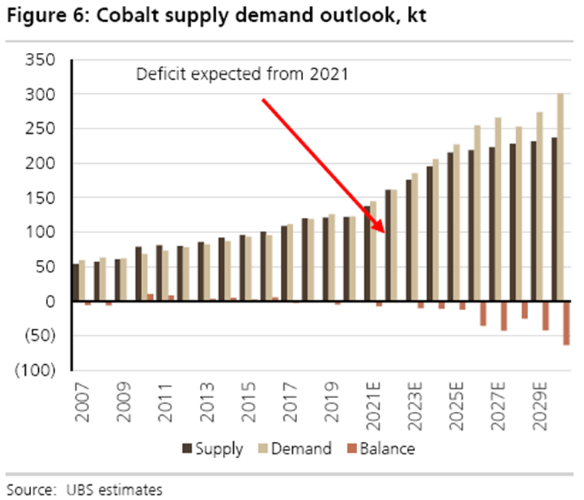 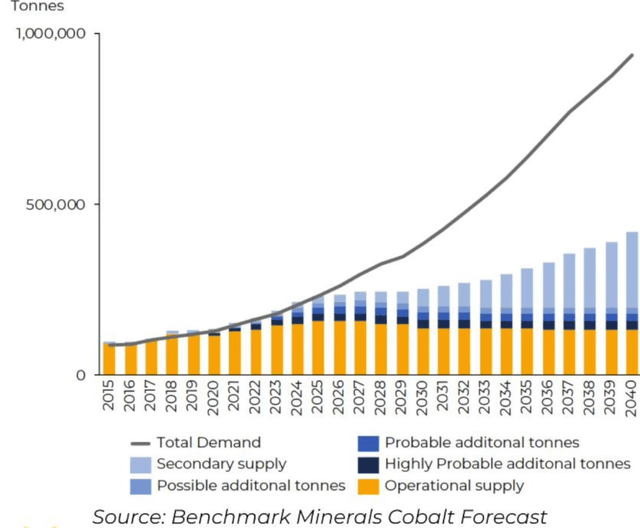 Cobalt investments seen shifting from DRC to 'bright spot' Australia.... which is seen as a "bright spot" for miners and offtakers seeking to avoid human rights and environmental risks associated with cobalt mining in the DRC. Australia represents a much lower risk environment if the EU [European Union] seeks to reduce its dependency on the DRC for cobalt," research firm Fitch Solutions said on Thursday.

Australia to set up $1.5 billion [~A$2 billion] loan facility for critical minerals projects......Morrison, who visited the United States for a Quad nations meeting last week, said on Saturday the group would work to improve the security of supply chains for critical technologies such as clean energy and ease a global chip shortage.

Strong growth for cobalt, but some headwinds too | LME Week 2021. EV sales have been particularly strong this year and are expected to total around 5.8 million, up from 3.3 million in 2020 and 2.4 million in 2019. While cobalt demand has benefited from the strong demand growth from the EV sector, demand will not have been as strong as it could have been because there has been quite a shift in attitudes regarding which lithium-ion battery chemistry EV original equipment manufacturers (OEM) are using. Second generation lithium iron phosphate (LFP) batteries have become increasingly popular in China and look set to be used more extensively outside China too. In China, LFP batteries' market share climbed to 52% in the first eight months of 2021, up from 39% in 2020 and 33% in 2019. LFP's gain means slower demand growth for cobalt. In addition, the trend is toward using higher nickel weighted-nickel-cobalt-manganese (NCM) batteries, which have lower cobalt content. Fastmarkets sees this as a blessing for cobalt because it will reduce the chances of cobalt shortages and unsustainably high prices - it also means shortages are less likely to force OEMs to use non-cobalt chemistries. The market is thought to be in a slight supply deficit this year and will remain in one next year, but with the giant Mutanda mine set to restart and ramp up again during 2022-23, supply should be able to grow with demand for now. As such, we expect prices to remain elevated in 2022, but below current levels.

Battery value chain action needed to meet unprecedented demand: panel.....Battery raw material demand is expected to be unprecedented in the coming years......"It is much easier to build a gigafactory and retool a car factory. The timeline to unlock a discovery and build mining projects is much longer -- we will reach a time when mining response won't be able to meet demand and run the risk of the mining industry dampening the whole electric vehicle dynamic. We all need to get our skates on and deliver units of the future to make the electric revolution happen," IGO Limited CEO Peter Bradford said.

LME WEEK 2021: Industrially mined cobalt can't respond to demand growth, ERG CEO says. Global cobalt supply can't keep pace with surging cobalt consumption because its production is tied to copper and nickel mining rather than underlying demand......"Our internal analysis shows that the recent announcements of restarts and capacity expansions at major operations in the Democratic Republic of the Congo (DRC) are too little, too late. Moreover, bringing new production capacity on stream takes considerable time and is subject to strict government oversight, as is the case in the DRC," he noted.

On October 21 InsideEVs reported: "Tesla is shifting standard range cars to LFP batteries globally. CATL will win big on this."

Investors can read more about GEM Co in my Trend Investing article: "A Look At GEM Co Ltd - The World's Largest Battery Recycling Company" when GEM Co was trading at CNY 5.08.

ERG owns the Metalkol facility in the DRC where ERG processes cobalt and copper tailings with a capacity of up to 24,000 tonnes of cobalt pa.

Umicore signs long-term sustainable lithium contracts with Ganfeng and Vulcan.....With these agreements Umicore also reconfirms its strong commitment to support the global growth of its customers through the creation of a sustainable battery materials value chain....

Umicore revises slightly its 2021 outlook. Umicore revises slightly its full year 2021 outlook and now expects adjusted EBIT to approach € 1 billion. This compares to the previous expectation of adjusted EBIT slightly exceeding € 1 billion as communicated on 30 July and reflects the recent decline in PGM prices, as well as a stronger than anticipated impact of the global semiconductor shortage on car production. Despite this more challenging market context, Umicore remains fully on track to deliver an outstanding performance in 2021. This outlook is based on current metal prices and visibility. It assumes no material further degradation of the semiconductor supply situation and incorporates rising transportation costs and higher energy prices.

Nornickel cancels repurchased shares. MMC Norilsk Nickel the world's largest producer of palladium and high-grade nickel and a major producer of platinum and copper, announces the cancellation of 4,590,852 ordinary shares, which were bought back from shareholders in June.

Nornickel announces production results for 9M 2021......Taking into account the current progress in the recovery of the production facilities of the Norilsk division, we reiterate 2021 metal production forecast for nickel and copper within the earlier announced range, while flagging up an upside risk for PGM volumes, which are expected at the top end of the guided range.

Note: Cobalt numbers were not given as treated by Norilsk as a by-product.

Third quarter report 2021 for the three months ending 30 September 2021. The cash balance at 30 September was $188 million, retaining the fully undrawn debt facility of $480 million, providing significant liquidity to progress expansions at Carrapateena and Prominent Hill. Investment in Carrapateena growth has continued with mine development activities to accelerate decline development, crusher procurement and Western Access Road construction progressing. Exploration and studies expenditure was higher with increasing activity at West Musgrave and the Carajás.....

Fortune Minerals announces start of NICO drill program......In addition to testing the east strike extension of the NICO Deposit, drilling will also test a number of coincident magnetic, gravity, magnetotelluric, chargeability and resistivity anomalies, including some with previous drilling that encountered significant gold and cobalt intersections.

Investors can read the latest company presentation here, or view a good video - "An introduction to the NICO Project."

......the Future Battery Industries Cooperative Research Centre (FBICRC), of which Ardea is an active member, has signed a contract valued at $18M to design and commission the FBICRC's flagship Cathode Precursor Production (PCAM) Pilot Plant in Western Australia. The consortium of FBICRC participants includes some of the largest nickel and chemicals producers in the world who are working with companies such as Ardea to produce from locally sourced materials, the present generation of cathode chemistries for the batteries used in electric vehicles.

Havilah 100% owns the Mutooroo copper-cobalt project about 60km west of Broken Hill in South Australia. They also have the nearby Kalkaroo copper-cobalt project, as well as a potentially large iron ore project at Grants. Havilah's 100% owned Kalkaroo copper-gold-cobalt deposit contains JORC Mineral Resources of 1.1 million tonnes of copper, 3.1 million ounces of gold and 23,200 tonnes of cobalt.

Investors can learn more by reading my article "Havilah Resources Has Huge Potential and/or my update article. You can also view my CEO interview here, and the company presentation here.

GME Resources own the NiWest Nickel-Cobalt Project located adjacent to Glencore's Murrin Murrin Nickel operations in the North Eastern Goldfields of Western Australia. The NiWest Project which has an estimated 830,000 tonnes of nickel metal and 52,000 tonnes of cobalt.

Barra is developing the Mt Thirsty project, which is a 50/50 joint venture with Conico, to produce cobalt suitable for the metal, chemical and battery markets. Barra is has two promising gold projects in Western Australia.

Investors can read my article on GEMC here.

GEMC's global pipeline of battery and some precious metals projects (amazing value for a company with only a C$7.6m market cap) 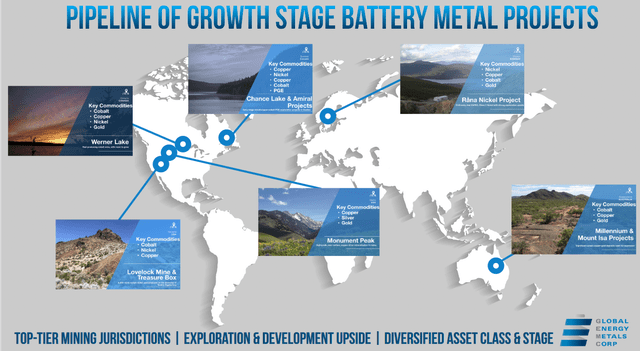 Thanks for reading. If you want to sign up for Trend Investing for my best investing ideas, latest trends, exclusive CEO interviews, chat room access with a focus on electric vehicle and EV metals sector. You can learn more by reading "The Trend Investing Difference", "Subscriber Feedback On Trend Investing", or sign up here.

Disclosure: I/we have a beneficial long position in the shares of NORSILK NICKEL (LME:MNOD),FORTUNE MINERALS [TSX:FT], ARDEA RESOURCES [ASX:ARL], COBALT BLUE [ASX:COB], AEON METALS [ASX:AML], HAVILLAH RESOURCES [ASX:HAV], JERVOIS MINING [TSXV:JRV], FIRST COBALT [TSXV:FCC], GLOBAL ENERGY METALS CORP. [TSXV:GEMC] either through stock ownership, options, or other derivatives. I wrote this article myself, and it expresses my own opinions. I am not receiving compensation for it (other than from Seeking Alpha). I have no business relationship with any company whose stock is mentioned in this article.