Since my last article on the SLV on August 15 (see 'SLV: A March 2020-Like Buying Opportunity') the iShares Silver Trust ETF (NYSEARCA:NYSEARCA:SLV) ETF is up slightly, despite initially seeing a large selloff that temporarily took prices below the USD20 level. The upside reversal since then keeps the bull market that began in March 2020 intact, and I believe another up leg is in the offing as silver benefits from the increasingly stagflationary economic backdrop.

SLV gives investors direct exposure to silver by physically holding the metal in vaults in London and has a 12-month median tracking difference of 0.7%. It is by far the largest silver ETF with a net asset value of USD13.3bn and 547 thousand ounces of silver under management. ETF outflows have stabilized after falling from their February 2021 peak, which coincided with the surge in retail inflows surrounding the attempted silver short squeeze by Redditors. The fund has an expense fee of 0.5% which is relatively low, particularly when considering the high spreads of physical silver.

I first wrote about the high likelihood of stagflation back in March 2020 in The Coming Stagflation And The Case For Silver when it became clear that policymakers were throwing caution to the wind with regards to money printing and deficit spending at the height of the pandemic. The surge in inflation and the weakness in growth we are currently seeing is in large part the result of the growth in government spending in the U.S. and the rest of the developed world over the past 18 or so months.

Earlier this month Morgan Stanley (MS) sought to define exactly what stagflation is, to which its clients gave the following responses:

Regardless of the exact definition, the key point to note is that inflation is rising not because of strong economic growth as developed market investors have become accustomed to in recent years. As I argued in Understanding The Real Drivers Of Inflation, despite the widespread belief among policymakers, inflation and growth tend to be inversely correlated most of the time. This has been the case in the U.S. economy over the long term as the chart below shows.

This should not come as a surprise as it is simple economics 101. For any given level of money supply, the less economic output, the higher prices will be. The combination of weak growth and high inflation tends to result from excessive government spending relative to tax revenues, if it is widely expected that the resultant fiscal deficits will remain in place indefinitely. High levels of government spending undermine the ability of the private sector to produce, while the increase in government liabilities raises the general price level.

It is easier to see these dynamics at play in the case of emerging markets, where the pool of real savings is lower. When emerging markets embark on socialist policies and debt monetization, as is the case in Brazil currently, stagflation tends to result much more rapidly as both domestic and foreign investors sell local assets in favor of hard assets (typically the dollar or gold). The fact that the U.S. has much higher levels of real savings and the dollar is the reserve currency means that policymakers have much more room to increase social spending and money printing before the stagflationary consequences emerge. However, this has merely given U.S. policymakers more rope with which to hang themselves. Moreover, the fact that policymakers continue to believe that weak growth can be somehow cured by more easy monetary and fiscal policy suggests that more stagflation is to come.

Precious Metals Will Be The Main Beneficiary

Periods of stagflation have tended to be the most difficult economic backdrops for investors to make money, particularly in real terms. The high inflation seen in the 1970s and 1980s resulted in U.S. stocks posting two decades of negative real returns from their peak in 1968, while bonds performed little better. I have recommended Treasury Inflation Protected Securities at various points over the past few years, most recently in 'TIP: The Next Inflation Wave Is Here', but even here the deeply negative real yield on the 10-year inflation-linked bond means long-term investors will lose money. Energy stocks are an alternative and have a strong track record of outperforming during periods of stagflation, and I remain long the XLE, VDE, as well as Shell and BP due to my long positions in U.K. value stocks. However, I expect precious metals to dramatically outperform over the coming years, as was the case during the 1970s. Given the current elevated gold-silver ratio, I believe silver will outperform gold even as the latter also performs well.

A Base Is Forming

The weakness in the SLV over the past five months or so has led many investors to believe that precious metals are no longer fit for purpose. However, despite being down 20% from its February high, the ETF remains up over 100% since the March 2020 low and appears to have formed a base around the USD20 area. Precious metal bull markets have a tendency to shake out the weakly-held long positions before embarking on their next leg up, and the February-September correction looks likely to have done just that.

Silver Is Deeply Undervalued Relative To Its Historical Drivers

In previous silver articles I have shown how silver prices are deeply undervalued relative to both gold prices and the price of the broad commodity complex. The idea being that as a monetary and industrial metal silver is driven in part by monetary demand and in part by the commodity complex. As the chart below shows, based on the correlation between silver and a 50:50 basket of gold and the Bloomberg commodity index going back to 2001, silver is currently around 40% below fair value. This suggests the metal should be trading around USD40/oz. 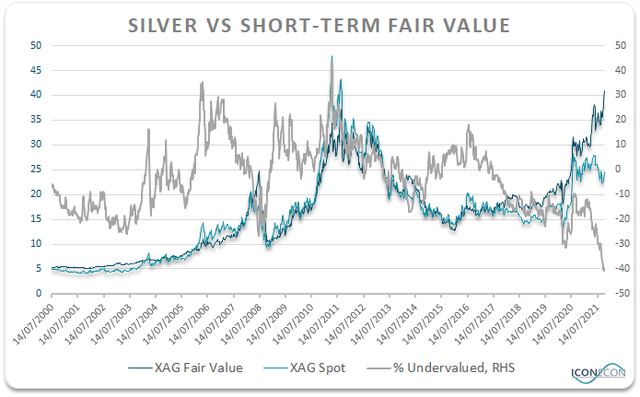 The economic backdrop is looking increasingly positive for precious metals, and silver in particular, which has a track record of outperforming during precious metal bull markets. In addition, the metal is already trading at a steep discount to where real bond yields and the commodity complex suggest is fair value, at least based on the strong correlation over the past 20 years. The SLV has shown its ability to track the silver price with minimal tracking error and a reasonable expense ratio and is therefore a good vehicle for benefitting from the resumption of the silver price rally.

Stuart Allsopp
3.45K Followers
I am a full-time investor and owner of Icon Economics - a macro research company focussed on providing contrarian investment ideas across FX, Equities, and Fixed Income based on Austrian economic theory. Formerly Head of Financial Markets at Fitch Solutions, I have 15 years of experience investing and analysing Asian and Global markets.

Disclosure: I/we have a beneficial long position in the shares of SLV either through stock ownership, options, or other derivatives. I wrote this article myself, and it expresses my own opinions. I am not receiving compensation for it (other than from Seeking Alpha). I have no business relationship with any company whose stock is mentioned in this article.