I first went long Brazilian stocks in May 2020 when they were trading at their most undervalued levels in almost two decades (see 'Brazilian Assets Look Worth The Risk'). Although they are still up significantly since then, the recent decline in the face of soaring earnings and dividends suggests Brazilian stocks may be even more attractive today.

Investor fears have risen over excess fiscal spending, rising inflation triggered in part by a drought, concerns over next year's election, and a collapse in iron ore costs. As a result, the MSCI Brazil index trades at a forward price-to-earnings ratio of just 6.5x and a forward dividend yield of 7.3%. For an entire country index to be trading with a higher dividend yield than its P/E ratio, there must be an incredible amount of fear regarding the country's economic outlook.

In my view these fears are overblown. The country has faced similar challenges in the past and overcome them despite far worse macroeconomic fundamentals. If history is a guide, investors should expect double-digit annual returns in Brazilian assets over the coming years, and the iShares MSCI Brazil capped ETF (NYSEARCA:EWZ) should outperform.

The EWZ tracks the performance of the MSCI Brazil index and charges an expense fee of 0.59%. The ETF holds 50 companies at present and is heavily weighted towards the materials and financial sectors, which have a 26% and 25% weighting in the index, respectively. Energy stocks make up a further 14% of the index. The index is primarily a vehicle to benefit from commodity price appreciation, which tends to drive both real strength and local stocks.

While the underlying MSCI Brazil index pays a trailing dividend yield of 6.8%, the EWZ's trailing yield is just 3.0%. However, this likely reflects the way in which ETF payments are made on a quarterly basis and so we should expect these cash payments to feed through into the EWZ over the coming months. Furthermore, MSCI Brazil dividend payments are expected to rise 8% over the next 12 months, which should result in the EWZ's dividend yield rising to close to 7%.

USD Based Equity Performance Table Since Start Of 2020

The MSCI Brazil index has been the worst performing major market in the world since the beginning of 2020 even as the commodity price rally has helped drive a surge in earnings and dividends. As the chart below shows, Brazil's terms of trade index tends to lead Brazilian corporate earnings and dividends. While the decline in iron ore prices has seen the country's terms of trade deteriorate from their peak in April, they remain at highly favorable levels from a historical perspective.

While Brazilian stocks have dramatically underperformed their peers, earnings have actually outperformed dramatically. The chart below shows the price performance of the MSCI Brazil index relative to the MSCI Emerging Markets index and the MSCI World index, as well as the performance of their respective earnings, rebased to January 2020. While the MSCI Brazil has lost around 50% relative to these markets, earnings have increased by around 50%.

The combination of declining equity prices and surging earnings has left Brazilian stocks among the cheapest in the world, and according to analyst estimates compiled by Bloomberg, earnings are expected to rise a further 6% over the next 12 months. This puts the forward PE ratio at just 6.5x, which is less than half of the MSCI EM index and less than one third of the MSCI World. Brazilian corporates are also expected to further increase dividend payments over the next 12 months, with estimated calling for an 8% increase in payouts, which puts the forward dividend yield at an impressive 7.3%.

Not only are Brazilian stocks dirt cheap, but the Brazilian real is also deeply undervalued. The currency's real exchange rate versus the U.S. dollar, which takes into account relative rates of inflation in both countries, is currently almost 40% below its long-term average going back to 1992. The only time the currency has been materially weaker than today was at the height of the 2002 crisis. 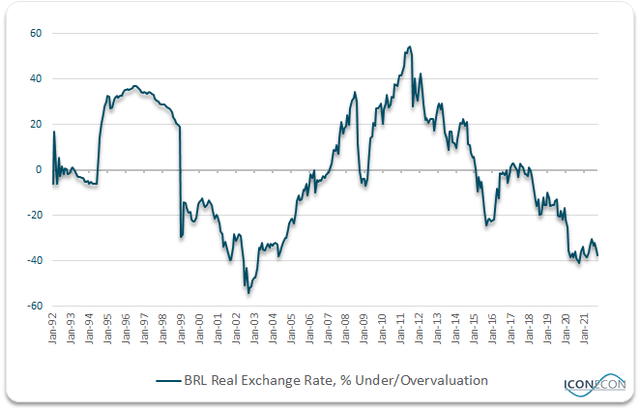 The current crisis has a number of similarities to the 2002 crisis, with investors dumping Brazilian assets amid a combination of political and economic concerns. The most notable of which is the growing likelihood that socialist leader Luiz Inacio Lula da Silva will take power. Back then, it was widely feared that an incoming Lula administration would default on its burdensome external debt load, which Lula himself had campaigned on.

This time around, there is little need to threaten such action. While central bank reserves amounted to less than half of general government external debt in 2002, they are around 4 times higher currently. Even if we look at the private and public sectors combined, the country's external balance sheet is in reasonable shape. The net international investment deficit coming in at just 35% of GDP 2020, with the bulk of Brazil's liabilities in local currency form, meaning that the kind of vicious cycle of currency weakness and rising external debt is not on the table today. This can be seen in the price investors are paying to insure against a government default, which is negligible at present compared to 2002.

On the fiscal front, there are growing concerns that President Jair Bolsonaro will undermine the country's finances following his allies' victory in a lower house committee for their plan to raise the constitutional spending limit. The president, who is currently trailing to Lula in the polls, is looking to increase welfare spending in the build-up to the election to be held next October. The risk is that the move sets a precedent that could ultimately lead to a surge in social spending, particularly if Lula comes to power. However, Brazil is not the only country with fiscal problems and in fact the country's deficit and debt load pales in comparison to the U.S.

Brazil's superior fiscal situation relative to the U.S. should give the BCB more room to hike interest rates in response to the current bout of inflation without causing a surge in government borrowing costs. Brazil's 5-year government bond is currently 519 basis points above 5-year inflation expectations, meaning that investors expect the BCB to hike aggressively over the coming year. In contrast, the U.S. figure is -170bps. This almost 7pp spread should allow the Brazilian real to outperform the dollar in real terms, to the benefit of the EWZ.

Brazilian equities are extremely cheap relative to their peers as well as their own history as investors have dumped assets amid a confluence of political and economic risks which echo the 2002 crisis. However, these risks are manageable today due to the country's improved external picture and the country's assets should outperform over the coming years. While the EWZ pays a dividend yield of just 3.0%, the 7+% forward dividend yield on the underlying MSCI Brazil suggests that EWZ investors can expect the yield to soar over the coming months.

Stuart Allsopp
4.01K Followers
I am a full-time investor and owner of Icon Economics - a macro research company focussed on providing contrarian investment ideas across FX, Equities, and Fixed Income based on Austrian economic theory. Formerly Head of Financial Markets at Fitch Solutions, I have 15 years of experience investing and analysing Asian and Global markets.

Disclosure: I/we have a beneficial long position in the shares of EWZ either through stock ownership, options, or other derivatives. I wrote this article myself, and it expresses my own opinions. I am not receiving compensation for it (other than from Seeking Alpha). I have no business relationship with any company whose stock is mentioned in this article.