September and October are typically uneventful months for Canadian dividend growth investors. Usually, there are only a few companies that announce their annual dividend raises and the space is pretty quiet.

There was however some action and today we'll focus on a utility company that has provided stable and consistent returns to shareholders - Emera (OTCPK:EMRAF) [TSX:EMA].

Emera has established itself as one of the most reliable regulated utilities in the county and is the fourth largest by market cap in the industry. The company is involved in electricity generation, transmission, and distribution as well as gas transmission and utility energy services. Emera has operations throughout North America and the Caribbean countries.

Approximately 85% of the company's rate base comes from electric utilities and 15% from gas utilities.

If you take a look at Canada's Dividend Aristocrats, you will find that utilities have a significant presence. Emera is no exception as it finds itself among the top third of the list.

Emera first initiated a dividend back in 1992 and, while it has never cut, has gone through a couple of periods of dividend stagnation. However, those days are long in the review mirror.

At 14 years, Emera owns the 27th longest dividend growth streak in the country and 4th longest among all TSX-listed utilities. Over this period, it has averaged approximately 7% annual dividend growth.

That is the good news. The bad news is that as Emera has grown, it is becoming increasingly more difficult for the company to grow. As such, the company's dividend growth rate has slipped in recent years.

On October 12, the company announced a 3.94% raise to the dividend. This came in a hair short of expectations and effectively extends the dividend growth streak to 15 years.

As we alluded to, Emera's growth has slowed and as a result the company's payout ratio has started to climb. 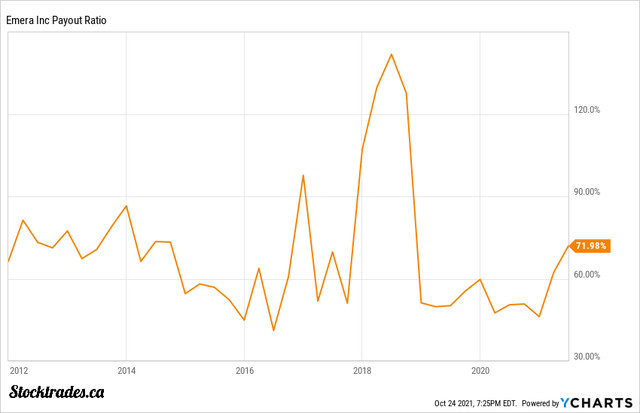 At 72% the dividend is still well covered, and it is by far the worst it's been. Over the past five years, Emera's payout ratio reached a maximum of 141% back in 2018 and the company's median is around 55%.

There is also some good news as the company is expected to grow its rate base by 7.5-8.5% annually through 2023. This may lead to higher EPS growth in the coming years.

Over the years, Emera has also been one of the few companies to announce dividend growth targets. Today, the company has a targeted annual growth rate of 4-5% through 2024. 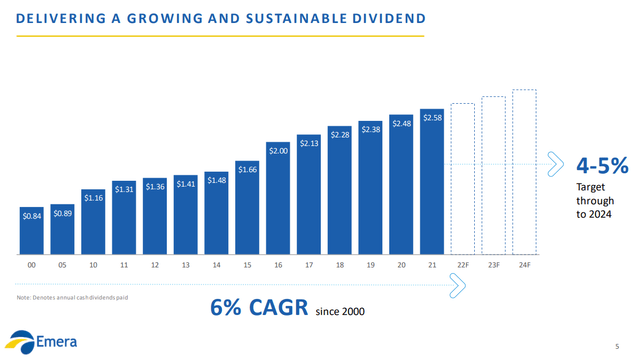 This level of insight provided by the company is welcomed. It is also worth noting that Emera has never missed dividend growth expectations.

Given revenue is 95% underpinned by regulated utilities, the company has deep insight into future cash flow expectations. This is what makes investing in utilities so attractive to dividend growth investors.

In terms of performance, Emera has been a steady performer. Over the past handful of years, Emera has been one of the best performing in the space. As you can see in the chart below, the company's share price has delivered the second-best returns. 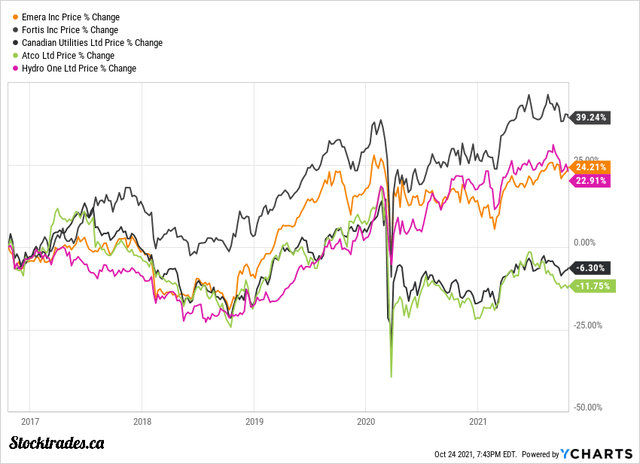 Regulated utilities aren't typically going to deliver outsized capital appreciation. This is especially true in our current environment whereby the threat of rising rates is weighing on the industry. High rates lead to higher borrowing costs for high-CAPEX industries such as utilities.

The other factor to consider is that typically, regulated utilities are allowed rate base adjustments based on inflation. So even if inflation rises, utilities can still recoup some (usually not all) of the rising costs.

Overall, Emera can still perform quite well so long as it achieves its stated goals.

Emera is currently trading at 24.23 times earnings and has an EV to EBTIDA ratio of 14.22. These don't exactly scream value, especially when compared to the industry averages which have ratios of 21.69 and 13.81 respectively.

That being said, it is also not that expensive either. In fiscal 2022, Emera is expected to grow earnings and revenue by 9% and 6% respectively. These are second only to Fortis (FTS) [TSX:FTS] and as such, the premium to the industry average appears warranted.

While YCharts gives it a solid 8 of 10 rating, when broken down into the individual components of the rating, Emera looks fairly valued. 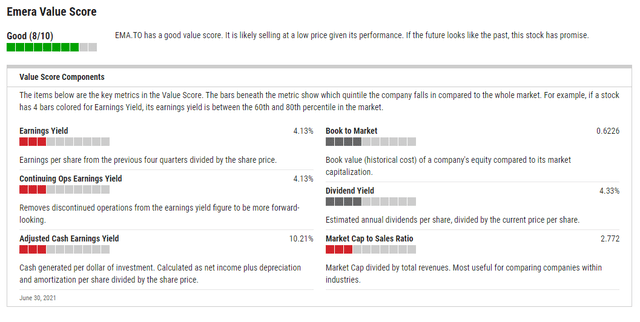 What can investors expect moving forward?

Given that the company looks fairly valued here, I'd expect the company to deliver in line with earnings growth. This means investors can expect mid-to-high single digit growth to go with a 4.5% yield.

Combined, investors are likely to enjoy total returns in the high-single digits to the low teens. Not a bad outcome for defensive investors looking for stable returns and growing income.

Mat Litalien
2.67K Followers
Two of his favourite stocks, goeasy and Well Health Technologies were up 39% and 341% in 2020. Mat is primarily interested in fundamental analysis, is focused on the long term and his portfolio is composed dividend paying equities and growth stocks. Mat has his MBA and is a founding partner of one of the fastest growing investment services in Canada (StockTrades Premium).
Follow

Disclosure: I/we have a beneficial long position in the shares of FTS either through stock ownership, options, or other derivatives. I wrote this article myself, and it expresses my own opinions. I am not receiving compensation for it (other than from Seeking Alpha). I have no business relationship with any company whose stock is mentioned in this article.