Brazilian beer giant Ambev (NYSE:ABEV) soared after an upbeat third quarter, with multiple key metrics showing strength as a pandemic recovery for the company continued. Although the Brazilian macroeconomic picture poses some larger risks, Ambev's general lagging performance since the summer opens up an interesting buying opportunity as the underlying business regains steam.

Ambev's Q3 hit most of the marks of a strong quarter, with the company noting that even as it is "lapping over a great 3Q20, in 3Q21 [it] saw continued commercial momentum drive our 7.7% top-line [volume] growth and 9.4% EBITDA growth compared to 2020." All geographies performed well aside from Canada, while operating metrics are reflecting strong growth compared to both 2020 and 2019.

Consolidated volumes rose to 9% above Ambev's historical average, reaching 180mm Hl; this level is almost 5% higher than 2015's peak, and reflects three consecutive quarters of record consolidated volumes. Ambev sees this as a sign of the "continued success of [its] strategy, the attractiveness of [its] brand portfolio, and [its] investments in the long-term growth of [the] business." Revenue performance also supports that thesis.

For the third quarter, consolidated net revenues reached R$18.5 billion, up 20.8% y/y compared to a strong 3Q20, and up a huge 42.9% compared to 3Q19. YTD revenues hit R$50.8 billion, up 28.1% on an organic basis. Eight of Ambev's top ten geographies (below) in the Americas showed growth above 2019's levels, with premium and new brands performing well with some market share gains overall.

On a per country basis, Ambev's top regions reflect solid growth and demonstrate the scale of this recovery above 2020 and 2019's levels. For 3Q, main market Brazil delivered growth rates above 20% compared to 2019, joined by Chile, Guatemala and Paraguay. Bolivia and Panama performed poorly relative to 2019, but jumped over 20% compared to 2020; both markets are not expected to grow as quickly over the next five years as pandemic and consumption effects persist, with Bolivia still easing on strict COVID restrictions. Canada was the only market to show weaker growth relative to both 2019 and 2020. YTD, Brazil and Argentina are delivering solid gains, while Chile, Guatemala and Paraguay are recovering the quickest with over 20% growth relative to 2019.

Ambev's breakdowns per country/geography illustrate that the company is seeing a broad recovery, with nearly all of its markets recovering - it's not just driven by one or two segments. Such a recovery bodes well for 4Q and for the setup going into 2022 even as the inflationary environment remains.

Brazil's beer segment outperformed the industry, delivering 16.2% revenue growth on 7.5% volume growth; YTD, revenues are up 23.6% on 11.8% higher volumes. Although cost management initiatives and revenue growth contributed to 8% gross profit growth, EBITDA took a hit from "transactional FX and commodity headwinds" and other S&M investments. Thus, the geographic segment is seeing some weakness in normalized EBITDA margins for 3Q that could persist through 4Q.

Non-alcoholic beverages performed similarly well, driven by Guaraná, Gatorade and H2Oh!. The segment delivered 22.4% revenue growth (+25.3% vs. 2019) for the quarters as volumes rose by almost 10%. However, the segment faced more issues down the line, with gross profit falling almost 5% y/y with EBITDA showing similar weakness. Again, the same headwinds prevailed.

Although this region is smaller on a revenue basis, about one-ninth the contribution of Brazil, premiumization efforts, momentum in that premium brand portfolio and consistent growth in core brands have driven much higher growth in the region. 20.4% revenue growth for the quarter was driven by strong performance and recoveries in the Dominican Republic, Panama and Guatemala (see above for those volume growth rates vs. 2020 and 2019). Ambev's BEES B2B platform had already generated about three-quarters of revenues in the Dominican Republic earlier in the year, and the platform continues to aid top-line growth in both Brazil and the Caribbean.

Ambev's second largest geographic region was a massive contributor to top-line growth and bottom-line growth. Chile, Argentina and Paraguay were the main drivers of this broad recovery. For the region, revenues rose a stellar 54.5% on an organic basis as volumes only rose 11.7% - growth of above core brands, Corona and other growth in the premium brands drove this performance. Gross profit rose 63.4% and EBITDA 74.0% as margins improved with cost management initiatives paying off.

YTD, the region remains a major driver, with revenues up 58.7%, gross profit up 65.8%, and EBITDA up 74.6%. All of this was in the face of strong FX headwinds, with the segment's R$4.6 billion organic revenue growth coming on top of a nearly R$1.7 billion adverse FX impact. Gross profit increased by R$2.5 billion even with a R$1.0 billion FX impact - again the huge top-line growth is offsetting even some large negative FX and inflationary headwinds. Even with some normalization in growth rates, performance for the nine months sets the segment up for a spectacular year and solid contribution overall to consolidated results.

Canada was Ambev's worst performing segment, with volumes 6.6% lower for the quarter, and revenues increasing 0.2% reported but decreasing 2.4% when accounting for FX impacts. Canada has had stricter COVID restrictions with some capacity limitations or vaccination requirements that could keep favorable conditions in dining and bars out of the picture for a broad-based double-digit recovery like other regions have shown. Even so, EBITDA remained flat as cost initiatives prevailed. The region has performed fairly flat YTD, with a slight dip in volumes, and a slight increase in revenues organically (positive FX impacts were large, ~+20% growth including those), as margins remained mixed; overall, potential recovery still lies ahead, with other countries showing strengths not yet exhibited in Canada.

Ambev does see a majority of its results generated from home country Brazil, exposing it to multiple geopolitical and economic risks, including FX. Earlier in the year, some of the risks that were predicted to possibly have impacts on Ambev's share performance included a weak Brazilian economic recovery, vaccine delays and the real's performance against the dollar.

Of those risks, the key one that has played a large role through the past two quarters is the BRL exchange rate. Over the past six months, Ambev's NYSE-listed ADRs have gained just 3%, dragged down by a four-month slide in the BRL exchange rate of ~11%; this has led to some recent underperformance relative to the Bovespa listed shares, which have returned ~10% over the six month period and have outperformed the NYSE ADRs since late September. Since its peak in early June, Ambev has lost nearly 25%. 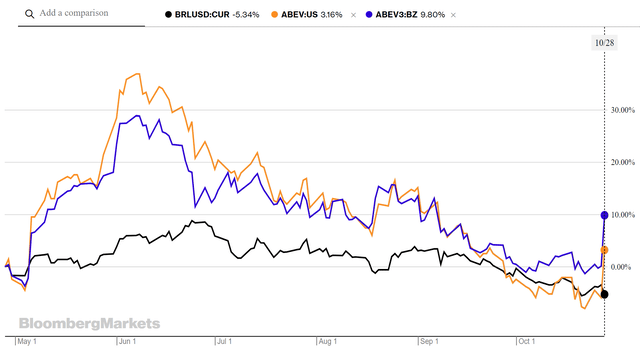 Another major risk facing Ambev and the Brazilian economy is soaring inflation, and the measures taken by the central bank to combat that - GDP is forecast to shrink for 2022 as a result. Brazil stepped up the pace with rate hikes, with the recent 150 bp hike taking rates to 7.75%, the highest in 20 years, as the country struggles against "some of the sharpest price rises among major economies, driven by factors including higher fuel costs, a weakened exchange rate and a drought that has pushed up energy bills." This is the nation's sixth rate hike this year alone, and expanded welfare payment possibilities unlock the potential for additional government spending to fuel further inflation.

Although the inflationary outlook is a bit worrisome for shares moving forward, Ambev's overall trends within revenues and volumes point to more share gains and persisting strengths in major markets coupled with possible recoveries in lagging geographies. With net income soaring, a R$16 billion net cash war chest on a strong balance sheet, and dividend growth highly likely for the year, Ambev shares look to be a decent buy on this pullback.

Mobility Matters Research
5.71K Followers
Your hub for everything mobility related. Coverage will primarily focus on the automotive industry, namely EV, and will touch upon charging, infrastructure, AV, eVTOL, and other mobility sectors.  Feel free to reach out with questions or comments!
Follow

Disclosure: I/we have a beneficial long position in the shares of ABEV either through stock ownership, options, or other derivatives. I wrote this article myself, and it expresses my own opinions. I am not receiving compensation for it (other than from Seeking Alpha). I have no business relationship with any company whose stock is mentioned in this article.