Amazon (NASDAQ:AMZN) has been dead money now since September 2020, with shares falling 1.5% vs. an S&P 500 that has climbed by 30.3%. The stock's struggles only seem to worsen, with the company missing analyst estimates for the third quarter and guiding fourth quarter revenue below expectations. 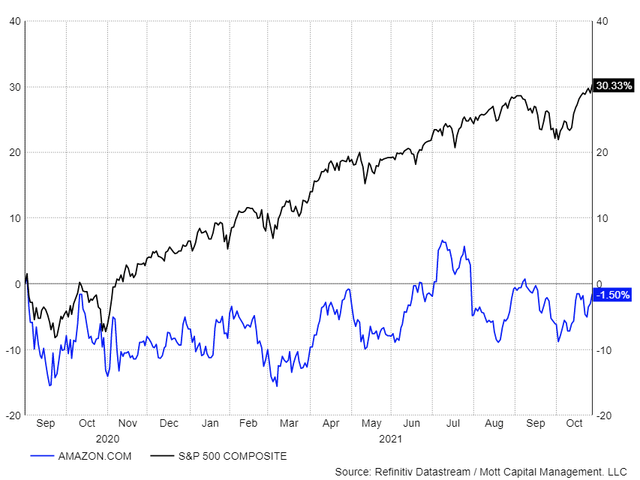 Thank goodness that Amazon Web Services didn't go the way of IBM (IBM) and deliver disappointing results. After all, both cloud services offer similar services, from domain name registration and web hosting to blockchain and storage. The quarter would have been a disaster if not for AWS coming within the consensus analyst's estimate range. AWS reported revenue of $16.110 billion, in line with the consensus analysts range of $14.907 billion to $16.125 billion, based on data from Refinitiv.

But even AWS is struggling because its operating margins have been stuck in a range of 28% to 30% over the past two years. Those AWS margins will need to expand even further, especially now that Amazon will need to depend on AWS even more as the overall business sees slowing growth and higher cost.

The fact that AWS operating margins have been range bound for so long suggests that AWS must be spending an awful lot to fend off the completion from IBM, Google (GOOG) (GOOGL), and Microsoft (MSFT) to hold up that topline revenue growth. If AWS needs to increase profitability and boost margin higher, then overall AWS revenue growth could suffer.

What makes matters worse for Amazon is that free cash flow from operations is still declining to $54.7 on a trailing twelve-month basis from $59.5 billion, its second straight quarter of declines.

It leaves the stock trading at nearly 32 times its free cash flow from operations, and with free cash flow falling, it's likely to lead to that multiple contracting further. Historically, the stock had gotten a boost when free cash flow was rising. It's clear after two straight quarters, the equity should no longer be seeing that multiple rise, resulting in that multiple falling over time. A return to the lower end of the range of around 25 times free cash flow, the stock's market cap should trade for about $1.36 trillion, which is 21% lower than its closing value on October 28. That would value the stock price around $2,725.

The stock is finding support on Oct. 29, around $3,300 for now, but that level is not likely to hold for long. Since July, the relative strength index has been trending lower and has a long way to drop until the shares reach oversold conditions again, hitting 30. Additionally, there's a bearish pattern technical pattern called a descending triangle, with a significant and critical support level at $3,200. Once that breaks, which the pattern and RSI suggest it should, the shares could easily slump to $3,000 over the short term.

With Amazon providing disappointing revenue guidance, analysts now see revenue in the fourth quarter decelerating to 10.7% from 15.3% in the third quarter. If revenue grows at that pace, it would be the slowest growth rate from the company since at least the first quarter of 2018 on a year-over-year basis. With slowing growth, rising cost, and declining free cash flow, this stock is likely to be dead money for the foreseeable future.

Disclosure: I/we have a beneficial long position in the shares of MSFT, GOOGL either through stock ownership, options, or other derivatives. I wrote this article myself, and it expresses my own opinions. I am not receiving compensation for it (other than from Seeking Alpha). I have no business relationship with any company whose stock is mentioned in this article.