Growth and value have traded off outperforming during different time periods. While many investors like to predict which style will outperform in the future, I view a blended approach as having the best risk-reward balance. Rather than pick growth or value, I aim to pick both stocks across all sectors and styles that I think can perform well.

I generally consider myself a growth investor because my expertise (or "edge") is in technology, a sector that's typically more growth-oriented. I recently published an article explaining why I don't believe the growth investing bull run is over (for a counter-argument, I recommend Lyn Alden's article about a resurgence in value). However, I actually have a relatively balanced portfolio that's only slightly growth-weighted.

Moreover, many individual companies don't fall evenly into the growth vs value debate. Per the Vanguard Growth ETF (VUG), Apple (AAPL) and Lowe's (LOW) are considered growth stocks. But by most key metrics - revenue growth rate, capital returned to shareholders, profit margins, to some extent P/E - they look more like value stocks.

Rather than insisting that growth will outperform value - or vice versa - a better question to consider is what weighting is most appropriate. This article provides three possible weightings that investors can choose from depending on their view of the future.

Whether growth or value outperformed in the past depends on what period of time we consider. As such, many contradicting studies have been published:

Safe to say that even if value has technically outperformed when measured over the longest time period, investors who go all in on this factor at the wrong time could end up getting burned. For example, a value investor who started out 10 years ago would take years to catch up to the overall market's performance even if value started outperforming now. This is yet another indication that some form of balance is important.

Also of note is that individual stocks can break out of the larger trend. For example, high quality value stocks like BlackRock (BLK), Target (TGT), and UnitedHealth (UNH) outperformed the already very high performing growth index over the last 10 years. Similarly, growth stocks like Apple and Amazon (AMZN) hugely outperformed during the "lost decade" from 2000 to 2010, even with part of the dot com bubble factored in. This is further evidence that for individual stock pickers, the quality of one's holdings is often the most important factor.

Since most investors benchmark against the S&P 500, we can consider the weighting in the S&P 500 to be a default target. 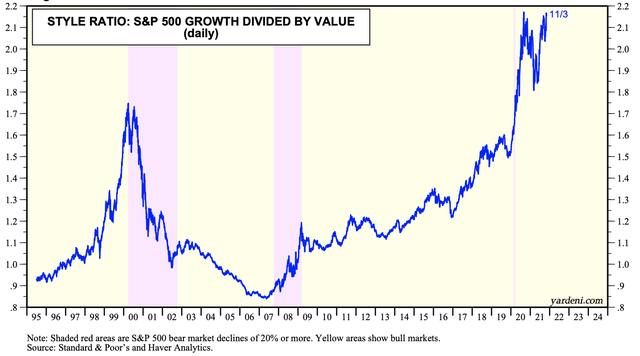 The problem is that this weight can vary dramatically over time, as shown in the graph above. Right now, the weight is skewed towards growth at an unprecedented level. The ratio is slightly over 2:1 compared to 1.5:1 pre-COVID, and a minimum of 0.9:1 during the financial crisis. But unlike during the dot com bubble, this weight has been trending up slowly for over a decade.

The shorter lived COVID crash appears to be an exception so far, with growth's lead only increasing since March 2020. Even so, a reversal isn't out of the question and value sectors like energy and financials have been leading over the past year. Plus, inflation has picked up and interest rates will likely increase in the future. These conditions are quite different from the pre-COVID market and they could indicate a paradigm shift similar to those seen after other crashes.

Broadly speaking, investors can choose from three options when considering their portfolio weight.

Some investors look at growth's outperformance over the last decade as evidence of a new paradigm. They'd argue that technological advances like the internet, smartphones, and cloud computing completely changed how people interact with the world and spend their money. Moreover, emerging innovations like self driving cars, AR/VR/the metaverse, and blockchain technology will keep this change moving in the same direction for years to come.

I certainly think that there's wisdom in this view. The world is more connected than ever and everything moves at a much faster pace than it did even ten years ago. The time and value spent in the digital world would have been unimaginable to somebody living not that long ago. Anybody who thinks the tech sector is going back to the 17% weight it had in 2010 is fooling themselves or has been living an Amish life.

On the other hand, there's also some truth in the counterargument that many tech companies' valuations have expanded at a faster rate than the overall market's. If we're nearing the end of the high growth phase for some secular shifts like cloud computing, e-commerce, and digital advertising - and/or if macro factors cause investors to care less about future profits - then some growth valuations are difficult to justify.

An investor who believes in this new paradigm might choose to allocate around 80% of their portfolio towards high growth companies, expecting that the index will eventually reach this weight. This approach is too aggressive for my liking, mainly because there are many high quality value stocks worth owning. If we define risk as the chance of losing most of your invested capital, then this approach will likely have the highest risk if the chosen growth stocks take a decade or longer to grow into their valuations or never become established.

On the other end of the spectrum, some investors will look at how the S&P 500 is currently weighted towards growth at an unprecedented level and expect a reversion to the historical mean. They attribute at least some of growth's recent outperformance to baseless speculation and/or to macro factors like low interest rates that are unsustainable, and don't believe that one style could ever reasonably account for more than two thirds of the overall index.

There is certainly some evidence supporting this view, such as the unprecedented post-COVID monetary policy, the unprecedented valuation of many high growth stocks, and the recent outperformance of energy and financials. It is theoretically possible that we see a "dot com V2" style crash during which growth stocks lose money and value stocks continue generating decent returns.

An investor who believes in this view might allocate most of their portfolio - maybe up to 80% - towards value stocks.

However, I would urge those that subscribe to this view to exercise caution, since this option could counterintuitively end up being the riskiest one. If we define risk to mean the chance of underperforming the index by a significant margin, then this approach certainly has the highest risk. Choosing to basically inverse the index weight is a hugely contrarian call that will only pay off if growth starts underperforming in short order. Otherwise, growth's continued outperformance will leave these investors behind, just as they were left behind when the bull market started in 2009.

The other issue I have with this approach is that many value stocks aren't exactly screaming buys right now by conventional standards. For example, many traditional value stocks like Target, UnitedHealth, and Chevron (CVX) are near all time high valuations just like many of their growth counterparts. Thus, the most likely way that this theory plays out is that growth stocks lose money while value stocks generate mediocre returns. This could happen, but if that was what I thought was the most likely outcome, I'd rather look to other areas like emerging markets and alternatives instead.

For investors who don't want to take on the risk of either of the above approaches, there's a more neutral option: use the index weight as a guideline. This is the approach I subscribe to.

Although matching the index weight to some extent limits one's upside, it also protects against downside. Macro factors can be unpredictable, and trying to project their impact on the market is risky. More importantly, great companies can outperform even in the face of macro headwinds or rich valuations, and there's no reason why investors should avoid owning great companies just to pick a side in the growth vs value debate.

That said, I personally aim to have between 35% and 40% of my portfolio in value. This is slightly higher than the 31% weighting towards value in the index today. It more closely matches the weight from pre-COVID times, so one could consider this my very conservative attempt at a reopening/mean reversion play.

I try not to get too caught up in the exact percentage though, especially since many companies like Apple and Lowe's blur the line between the two approaches. Similarly, many of my emerging market and crypto investments would likely be considered growth, but they often move in a relatively uncorrelated manner with traditional growth and value stocks.

Many investors seem to fall into the trap that their gain must be someone else's loss. This causes them to under-diversify their portfolio by focusing too much on their favorite strategy. However, everyone who simply held a major stock market index for longer than a few years - or better yet, dollar-cost averaged - came out as a winner.

Since the major indexes aren't heavily growth or value-weighted, this is evidence that multiple strategies that can be successful, especially if one picks high quality companies within that strategy. Personally, I sleep better at night knowing that all my investments aren't in one strategy.

Kennan Mell
5.45K Followers
Kennan is a software engineer who has worked at companies of all sizes, from as large as Google to as small as a single person. He's received job offers from all of the famous FAMG companies, and graduated cum laude from the Paul Allen School of Computer Science at the University of Washington. Although not an investor by training, he enjoys applying his technical knowledge to analyze high tech companies and find investment opportunities for a long term time horizon.---Kennan runs Tech Investing Edge, a Marketplace service on Seeking Alpha. The service shares research on growth stocks in high tech industries like SaaS and cryptocurrency, combining qualitative and quantitative research with a focus on timely events and opportunities. Subscribers are able to ask questions in a chat room and request research about topics they're interested in.