AerCap (NYSE:AER) is a great way of playing the reopening theme. The company benefits from the post-pandemic world twofold with the increase in demand for air travel and the increase in demand for leased aircraft. Wealthier consumers that were starved of long-distance travel with more free time will travel more. Airlines have stretched balance sheets and will find it better to lease aircraft instead of buy in this environment.

Buybacks will be a key catalyst. AerCap has halted its buybacks with the pandemic. Share buybacks have historically been an essential part of the bull thesis. The completion of the GECAS deal, deleveraging, and credit rating upgrades will likely trigger repurchases.

The company valuation is modest. I see 25% to 44% over the coming two to three years. AerCap is a conviction buy for me.

Coming Months Will See a Higher Demand for Aircraft

We've seen air travel halt over the past year and a half. Consumers stopped travel either by government mandate or by fear of infection. Businesses halted all non-essential travel; most meetings were held online. Closed borders made even essential travel difficult. This has resulted in cratering in air travel stocks which lagged the market significantly. I've provided two charts below, first of the relative performance of US Global Jets ETF (JETS) vs. global markets (I've used iShares MSCI World ETF (URTH)), and second vs. the S&P 500. The relative prices are near pandemic lows. 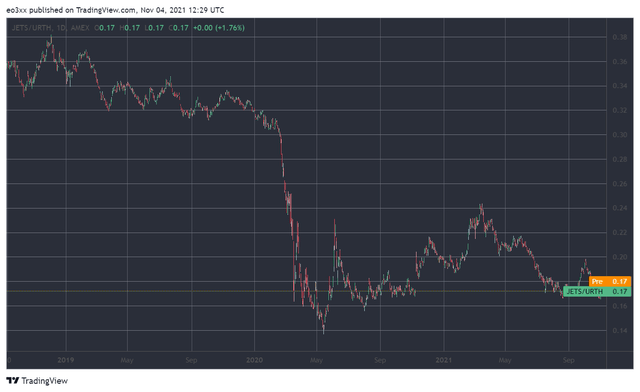 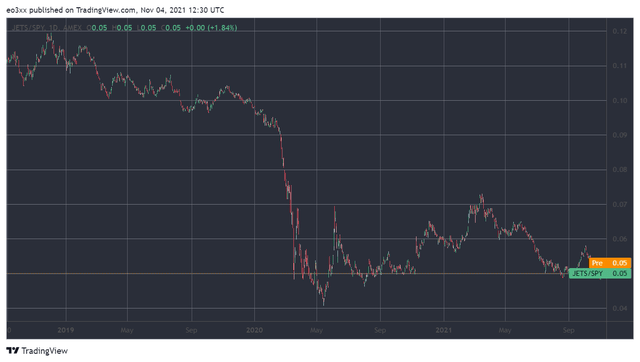 Now though, the picture is about the change. I've written extensively on the reopening theme and the unwind of pandemic-era trends and the cyclical swing to the services sector. Perhaps most relevant is my article on Southwest Airlines (LUV); please refer to it for more detail on the increasing demand for air travel. But the gist of it is that we're about to see strong travel activity fueled by the pent-up demand for travel and consumers with more free time due to the covid retirement boom, sabbaticals from work, and higher wages.

The recovery will increase demand for air travel and aircraft. I went on a hunt for the change in aircraft count of major airlines, below is a list of those that I could find. We can clearly see that there is a broad decrease in aircraft count. I expect a significant increase in these numbers over the coming quarters as the travel rebound comes in full. More travel than before the pandemic will result in more aircraft than before the pandemic. 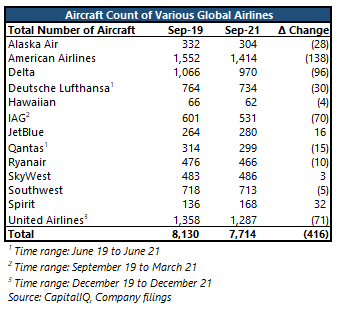 Aircraft Leasing is a Great Way to Play the Recovery

Aircraft leasing should be a better way of playing the theme than airlines. First of all, leasing is isolated from the business travel rebound. Business travel is top of mind for airline investors. The covid induced surge in online meetings may not be permanent but a significant portion of non-essential business travel will be moved online for good nevertheless. This is important for the airline industry as business travel accounts for 75% of industry profits.

Moreover, airlines will choose to lease aircraft instead of buying which will further boost leasing demand. There are several reasons behind this. Leasing is more nimble. Ending a lease or negotiating lease terms is easier than offloading an aircraft or negotiating with a bank. The uncertainty of the day calls for the agility of the leasing model. Like United (UAL), major airlines are not trying to time the recovery but playing reactionary. Their conservativeness today will require them to obtain aircraft very quickly in the future. Airlines will lease a lot more than they buy.

Airline balance sheets have suffered. I've provided a table of the change in Net Debt/EBITDA and interest coverage ratios between before and after the pandemic. I've used the next twelve months' EBITDA from today to highlight the starkness of the situation and because most last twelve months' EBITDA's are negative.

Of the 21 airlines in the group 15 of them had their Net Debt/EBITDA ratios increase with the median ratio increasing by 1.2x while 19 had their interest coverage ratios fall with a median decrease of 7.7x. Balance sheets are stretched. The gap between paying for a lease and paying for an aircraft financing loan is narrower than before the pandemic. Many airlines will opt to lease instead of buy. 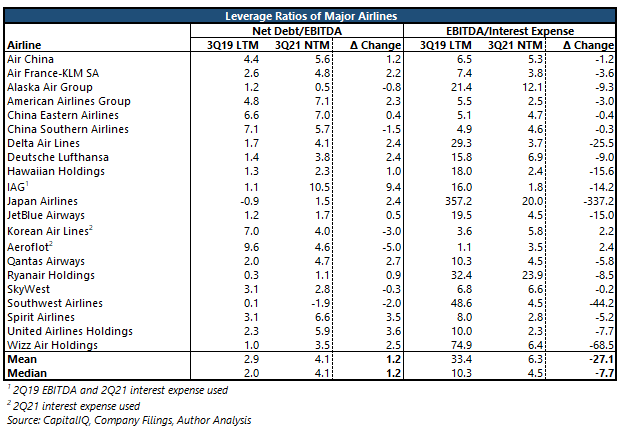 AerCap is among the best to capture this phenomenon as the industry leader. Scale is important as it reduces the cost of capital and increases efficiency. Cost of capital is critical as aircraft leasing is at its core just a game of playing the spread between financing costs and lease revenue. Scale brings diversification which reduces risk. A financer of AerCap is taking the risk of the entire global aviation industry and not just the risk of any single airline or region.

AerCap's revenues are significantly diversified with its top three customers accounting for just 14% and its top region, the Americas, accounting for just 29% of the business. AerCap will structurally have a lower cost of capital than any airline thus the spread will always be there for it to capture.

The company is efficient as well. After the recent acquisition of GECAS, it's become the leading aircraft lessor globally. It has 1,811 owned and 191 managed aircraft with 450 orders in place. The large scale enables it to achieve high capacity utilization.

Despite performing better than the airline sector, AerCap also has lagged the broader market. Below is a chart between its price compared to the price of the S&P 500. However, the worst is over for AerCap and the sector. Its customers are starting to pay. AerCap's trade receivables have decreased by 30%, and deferral balance by 10% in its most recent quarter.

Cash collections went past 100% this quarter going way up to 140% if deferrals are included. Given that the trade receivables are still well over pre-pandemic levels (~$150 mn at the end of Q2 vs. $48 mn at the end of 2019) AerCap's trend of collecting prior revenue should continue to generate strong cash flow. 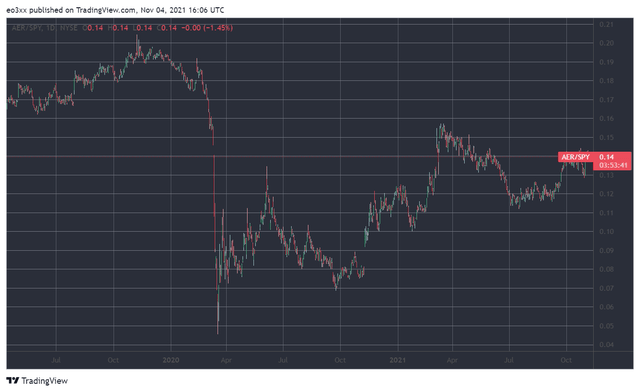 All in all, I see AerCap as much better positioned to generate free cash flow compared to before the pandemic benefiting from the oncoming surge in travel demand as well as the incrementally higher demand for leased aircraft. I expect alpha generation from AerCap vs. the market that will at the very least close the gap in the chart above.

AerCap was an aggressive buyer of its shares before the pandemic. The company brought down its share count by 9% per annum between the three years from 2016 to 2019. The purchases were put on hold with the reduction in cash collection at the start of the pandemic and the hold remained in place due to the GECAS acquisition.

The current valuation hits the AerCap repurchase trigger. The company has historically seen its shares as attractive when the P/B multiple was below 1x. I've provided a chart below comparing the P/B ratio and the share count. The share count begins to decrease when the multiple falls below 1x. This was true in 2012 and 2016 until the pandemic. I expect AerCap to purchase its shares with the current P/B ratio of 0.9x.

The final critical hurdle in front of the buybacks is AerCap's credit ratings. A good rating is important for the company as it frequents the debt markets to fund its business. AerCap is looking for upgrades and they're rolling in. S&P (SPGI) rates AerCap at mid-BBB and has recently changed the outlook to stable from negative in October. Moody's and Fitch have low-BBB ratings and have also upped their outlooks from negative to stable in June and November respectively. I expect both Moody's and Fitch to upgrade AerCap to mid-BBB status over the coming months (my best guess is ~6 months) removing the final obstacle holding back share repurchases.

Valuation Very Cheap and AerCap is a Conviction Buy

AerCap's current valuation is very cheap despite the rally from pandemic lows. Currently, the company trades at around 0.9x P/B. This isn't just low compared to the market but near historical averages for the company (see chart above). Given the favorable positioning AerCap has over the coming years, I expect a premium valuation vs. its history. I argue for at the very least 1x book value and more likely >1.1x is appropriate. Consensus book value per share estimates are $80.9 for fiscal 2023 and $84.7 for fiscal 2024. Thus, I expect a price range of $81 to $93 implying an appreciation of 25% to 44% in the next two to three years.

AerCap is an overlooked high-quality asset with solid reopening prospects and a modest valuation. The stock is a conviction buy for me.

Rogue Trader
1.56K Followers
Ex HF portfolio manager, Ex management consultant. Now I manage my own money and focus on anything that can create alpha. I will write on any idea I have and lay out my thesis and analysis openly to get feedback from and discuss with the SA community.

Disclosure: I/we have a beneficial long position in the shares of AER, LUV either through stock ownership, options, or other derivatives. I wrote this article myself, and it expresses my own opinions. I am not receiving compensation for it (other than from Seeking Alpha). I have no business relationship with any company whose stock is mentioned in this article.