This article was first released to Systematic Income subscribers and free trials on Nov. 1.

Welcome to another installment of our CEF Market Weekly Review where we discuss CEF market activity from both the bottom-up - highlighting individual fund news and events - as well as top-down - providing an overview of the broader market. We also try to provide some historical context as well as the relevant themes that look to be driving markets or that investors ought to be mindful of. This update covers the period through the last week of October. Be sure to check out our other weekly updates covering the BDC as well as the preferreds / baby bond markets for perspectives across the broader income space.

October was a strong month for the broader income space and the CEF market was no exception. Although about as many sectors saw weaker NAVs as those that saw stronger NAVs, the average move in the NAV was very strong, supported primarily by equity-linked sectors. In the fixed-income space, CMBS and taxable munis benefited from the more cyclical exposure in the case of the former and the flattening of the yield curve (with the long bond yield moving 0.15% lower) for the latter which carries the longest duration exposure in the CEF space. 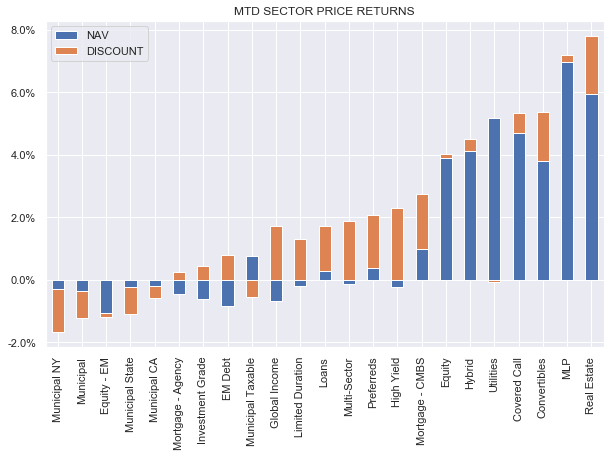 Another key support was a broad rally in discounts with the exception of municipal sectors which have been under pressure from their already rich underlying valuations observed in their Treasury ratios.

October was very close to a mirror opposite of September with aggregate higher NAVs and a reversal of wider discounts. 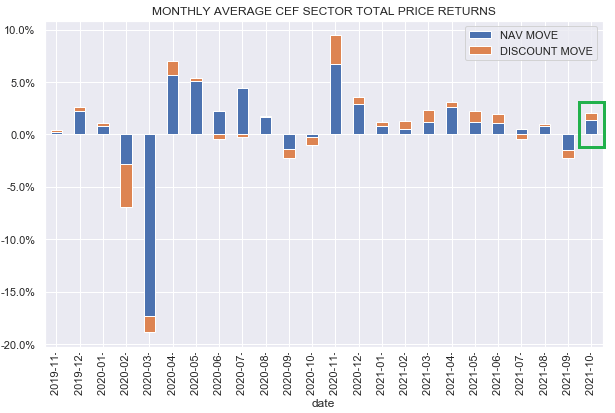 Discounts have mostly retraced close to their recent peaks. The persistently high valuation of CEF discounts is no doubt annoying to investors patiently waiting to deploy additional capital. The market has even been able to apparently digest a more hawkish turn by the Fed, reflected in the 2Y Treasury yield rising from 0.22% to 0.48% in just 5 weeks. 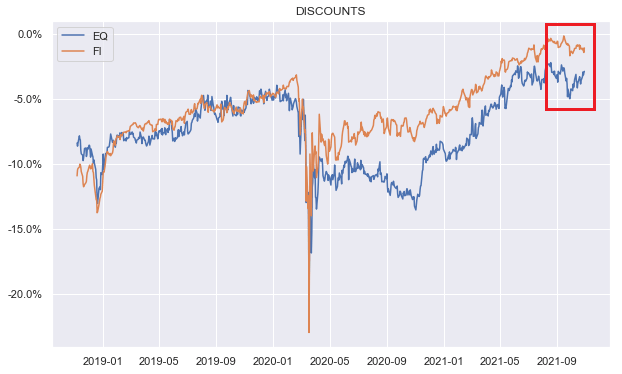 Goldman Sachs, as well as other banks, have pulled forward their first-hike calls. The bank earlier expected the first hike to happen only in 2023. Now they are calling for a first hike in July of next year and the second in November.

Historically, a hawkish surprise by the Fed would have made a significant dent in higher-quality sectors. And while a number of these sectors have indeed come off a bit, they are still trading at elevated valuations. For instance, as the following table extract from our CEF Tool shows, Muni sectors are trading at 5-year z-scores, around or above 1 and even 1-year z-scores are well above zero. 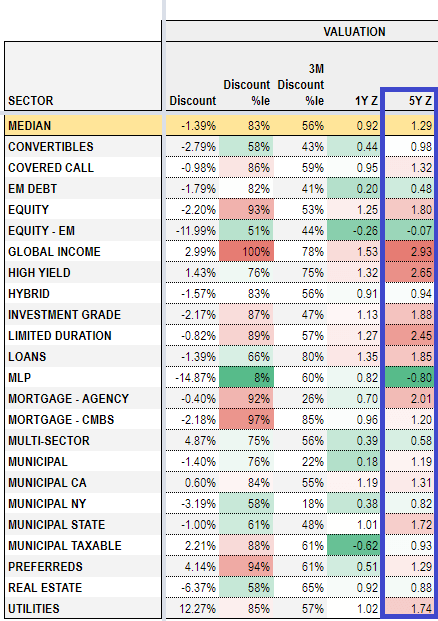 And if we see how the market reacted so far to this hawkish turn by the Fed versus the 2013 taper tantrum, the reaction so far has been extremely benign relative to the previous experience. So, while, the recent muni sell-off in NAVs and discounts has been unpleasant for investors, it could have been much worse. Our consistent view has been that the Fed has learned a number of lessons from the 2013 experience as has the market and so a repeat of 2013 was very unlikely. 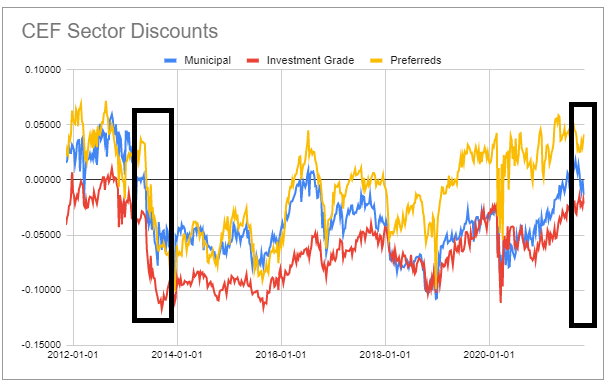 We recently discussed CEF durations on the service a well as some of the interest-rate sensitivity metrics available on the service CEF Tool. Our mantra has been that duration is an incredibly blunt metric which can mislead investors as much as inform. The key point is that funds don't move simply in line with their durations - there are a number of other moving parts.

For instance, PIMCO taxable funds tend to have mid-single digit durations, e.g. the PIMCO High Income Fund (PHK) shows 4.83 currently on its website. So, based on this, you would think that the fund’s NAV would drop appreciably each time that Treasury yields rise.

As it happens, the NAV actually rallied the last time Treasury yields rose quickly about a year ago. And this is not because the fund's duration was negative then - it was actually slightly longer.

What credit spreads do depends on 1) their level – very tight credit spreads are unlikely to tighten further and are more likely to widen and 2) how the market perceives the change in Treasury yields i.e. if it is perceived as bearish (e.g. the Fed surprises everyone with a very hawkish move) then spreads are more likely to widen along with risk-free rates.

Let's compare the behavior of the PHK NAV through these two periods of rising Treasury yields. 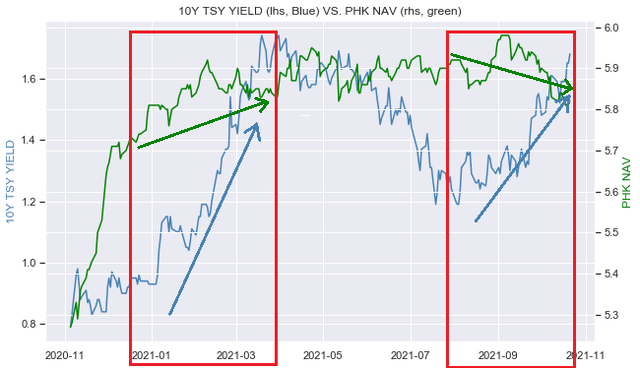 With this more recent Treasury yield rise starting in August, PHK NAV fell because credit spreads had little to no room to tighten further and the macro newsflow turned more downbeat with analysts cutting their growth forecasts so there was nothing to offset the rise in Treasury yields. We can see this in the chart below which shows high-yield credit spreads over the last year with them tightening in the first period and remaining flat in the second. Credit spreads have been trading very close to their long-term floor for about the last six months which makes it difficult for them to rally further even if the newsflow was more positive.

The key takeaway for investors is that the tightness of credit spreads has, in effect, increased the durations of credit CEFs, all else equal, because there is less room for spreads to tighten. In other words, credit CEFs are more sensitive to Treasury yields because credit spreads have much less dampening ability in the current market.

If the current relatively benign reaction in the Muni space to more hawkish Fed commentary is as much a sell-off as the market is going to deliver it suggests that investors with a core allocation to Munis shouldn't necessarily batten down the hatches. And even if current valuations are not a screaming buy either, it can make sense to reallocate opportunistically as more attractive valuations present themselves in the sector.

In the investment-grade focused sub-sector we continue to like the Eaton Vance Municipal Income Trust (EVN), trading at a 4.22% current yield and a 3.8% discount.

The fund has outperformed the sector over the last 3 and 5 years in NAV terms. 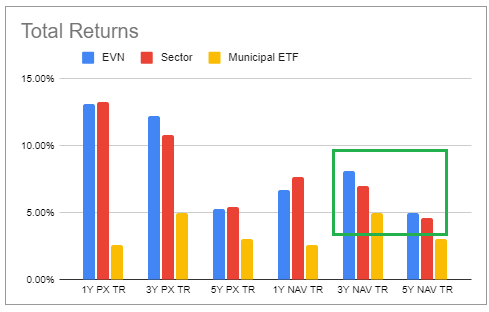 And it continues to trade at a wider discount than the broader sector.

Coverage is a touch north of 100% and the UNII level and trajectory are both positive.

We also like the BlackRock MuniYield Quality Fund III (MYI), trading at a 4.28% current yield and a 4.6% discount. The fund has outperformed the broader sector over the last 3 and 5 years in total NAV terms.

Despite this strong performance, the fund's discount continues to trade wider of the sector average.

The fund's coverage remains north of 100% with a rising UNII level.

Fund borrowings have grown slightly over the last year which supports the income level. 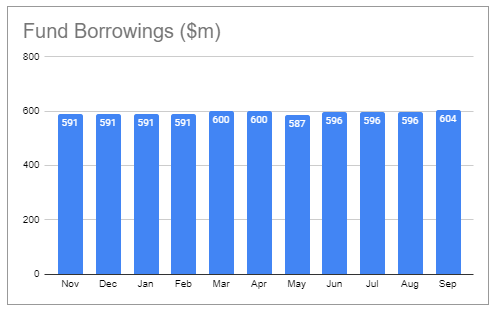 Both funds remain part of our Muni Income Portfolio.

In our view, a focus on seeking out funds with a strong and consistent level of historical returns which also trade at attractive valuations is a more useful strategy for most strategic investors than making large sector allocation changes based on newsflow. Even in a fixed-income market that is experiencing headwinds, this strategy can deliver attractive alpha and income while also benefiting from a margin of safety.

Disclosure: I/we have a beneficial long position in the shares of MYI, PHK either through stock ownership, options, or other derivatives. I wrote this article myself, and it expresses my own opinions. I am not receiving compensation for it (other than from Seeking Alpha). I have no business relationship with any company whose stock is mentioned in this article.