I purchased a decent-sized position (vs. my portfolio's net assets) last week in a sum of the parts idea, holding extensive cash/liquid assets. My investment process for finding the stock was the name first appeared in one of the more successful momentum sorts I have been running in 2021. The second step is I looked at the specific chart pattern the last six months, using as many as 12 different proprietary indicators I have invented over the years. Both of these steps pointed to a strong buy proposition, without even looking at the fundamentals, the third step.

I have been a follower of Courage & Conviction Investing on Seeking Alpha for many years. This writer does terrific fundamental research on smaller cap choices and has a very successful track record. So, when I figured out Advanced Emissions Solutions (NASDAQ:ADES) is one of his top holdings and heavily recommended in a number of articles this year, I started buying shares a few hours later.

The company is smaller, with an equity market capitalization of $130 million at $7 per share, 136 employees, $78 million in trailing 12-month revenue and $35 million in reported net income. ADES held $76 million in cash and current assets vs. just $42 million in total liabilities, including $3 million in debt at the end of June. A strategic review of the business is underway, that may include selling its primary Red River asset, held on its books at a cost well under its liquidation value. 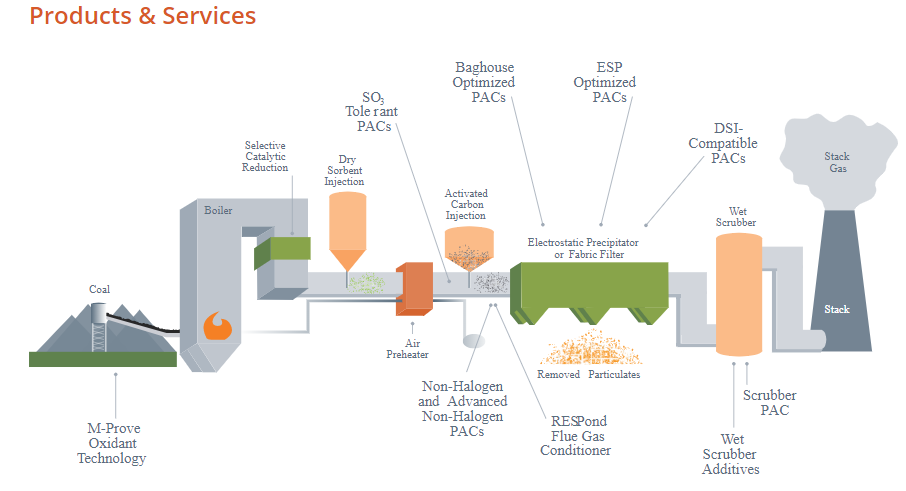 Below is a review of the underlying value of ADES estimated by Courage & Conviction's September article,

We have a company that should have roughly $4.50 to $5 per share in yearend cash and owns a valuable Red River plant. As I noted, this plant costs $400 million to build and ADES bought it, for a fire sale price, back in December 2018, when it was thought to be losing roughly $15 million per year in cash flow. Fast forward to today and capacity utilization is much healthier, ADES has the 15-year Cabot deal, and non-coal fired generation mix (end demand) is close to 50% of revenue (and climbing). If Red River sells for $150 million, then this translates into an incremental $7.89 per share. If you want to be super conservative and say Red River is only worth $100 million (that is still $5.25 per share). So, in the event of a sale, we are talking about $9.75 to $12.50-ish per share, depending on your assumptions.

Another good review of the moving parts and operating business direction was outlined in the June Earnings Presentation below. 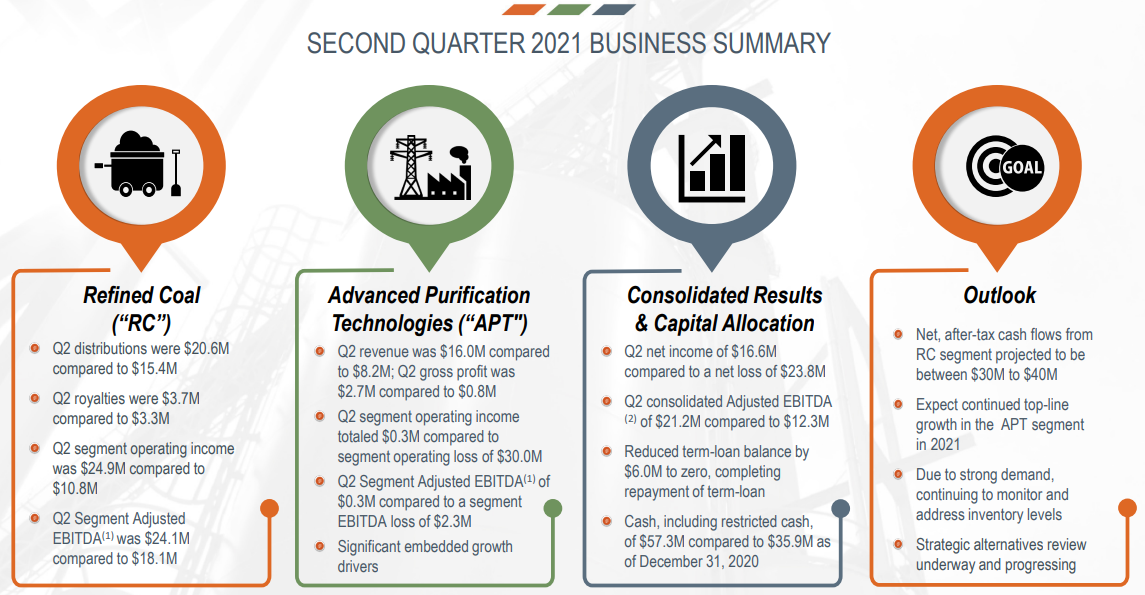 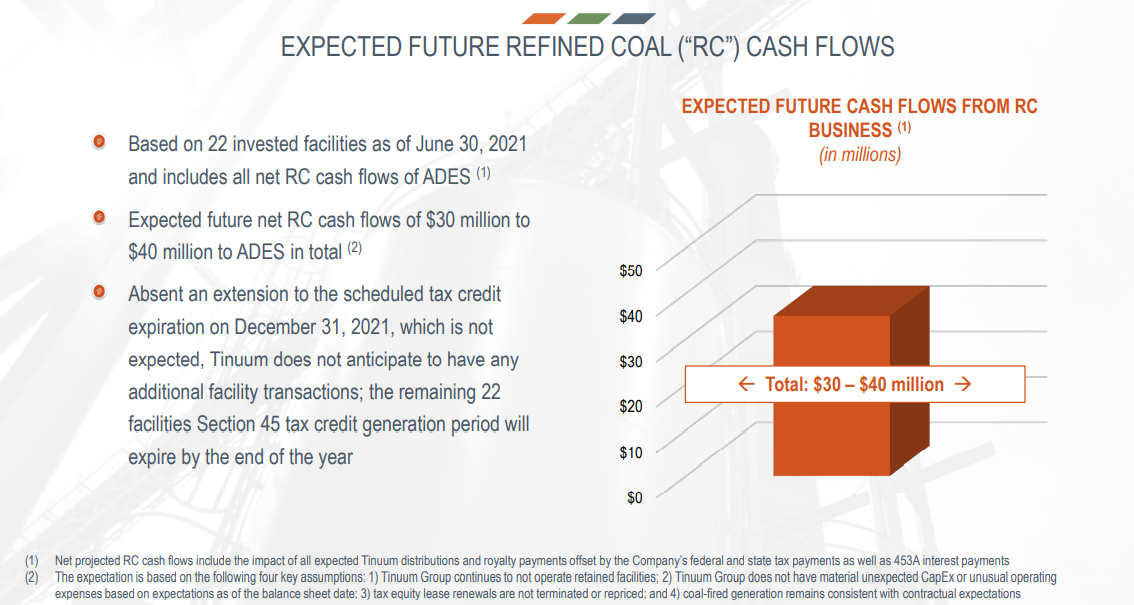 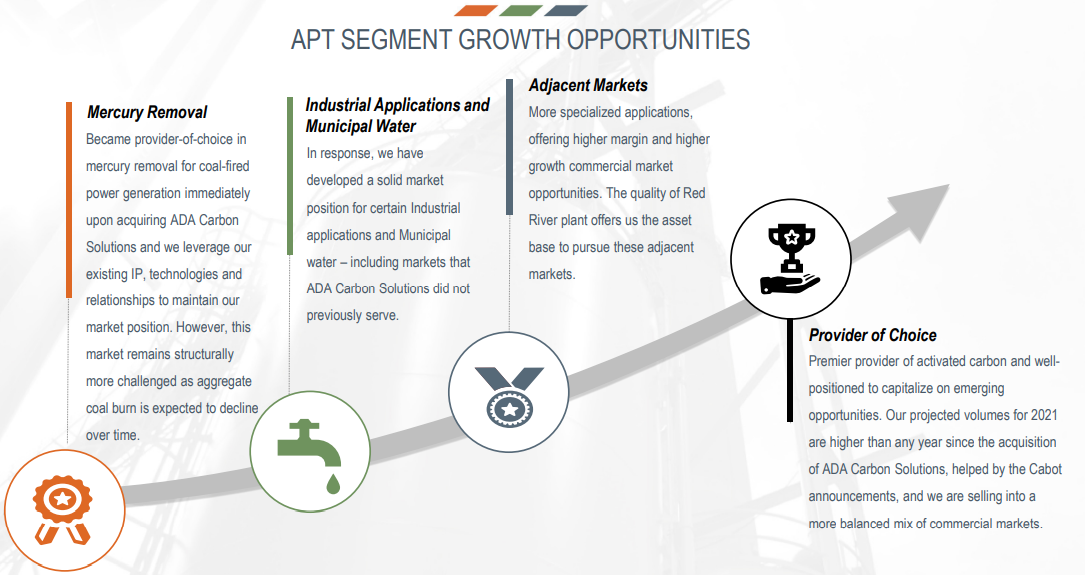 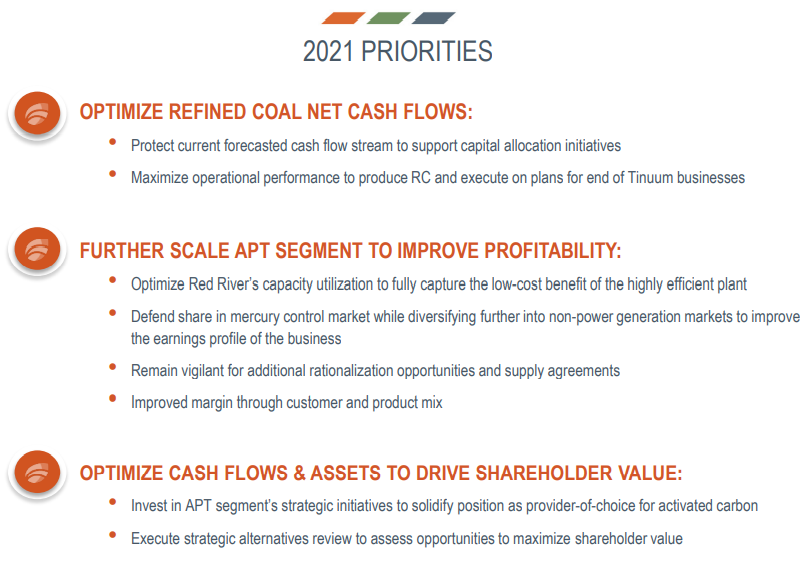 Again, the excitement for owning ADES right now is a chart pattern that appears ready for much higher pricing. A consolidation phase since June looks to be finished. The stock has just recaptured its 50-day moving average and is trending well above its rising 200-day moving average.

Over the last 6-month and 1-year periods, ADES has outperformed both the S&P 500 and Russell 2000 indexes. The Accumulation/Distribution Line and On Balance Volume indicators are both super bullish the last 12 months, drawn below. Plus, a slew of other proprietary indicators not pictured are in a buy zone. If positive news from operating results or a Red River asset sale announcement is coming, I don't know where selling volumes will come from. To me, it looks like the upside is wide open for a significant price advance. 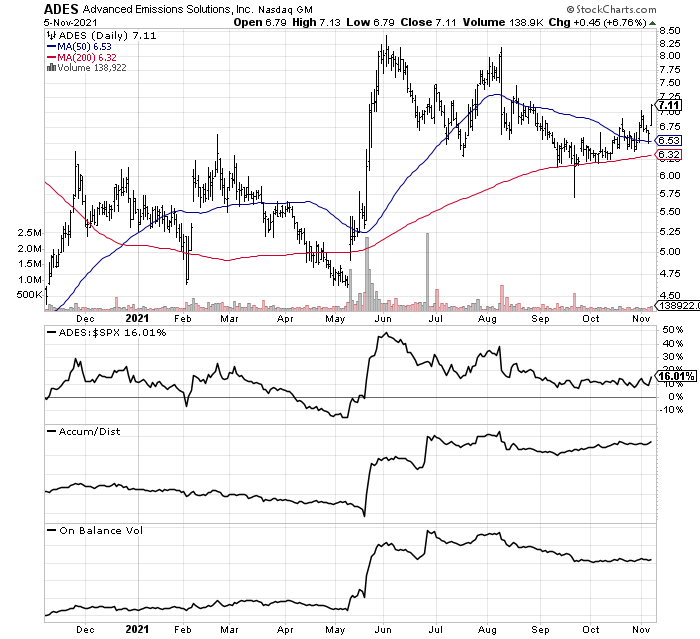 Using a combination of Courage & Conviction's workout numbers and my research, ADES could easily be selling for $10-12 a share between March-June next year on the sale announcement of its Red River asset. This target price zone could be backed almost entirely by cash, and a remaining business with few liabilities valued at next to zero.

Considering how overvalued Wall Street in general has become during late 2021, owning a business with plenty of cash on hand and a plan to sell assets sounds like a far more constructive and intelligent investment approach compared to the majority of alternative equity setups. For example, if the U.S. stock market crashes 40-50% the next 6-12 months from a slowing economy and rising interest rates to match inflation (which it could), finding a buyer for Red River may still translate into a +50% to +100% quote jump in ADES.

What could go wrong? Outside of a normal 10-20% correction, three main risks exist. Perhaps no serious buyers can be found for Red River, coal prices collapse and the whole industry (ADES customer base) shuts down overnight, or management goes on an aggressive acquisition spree. If the company spends its cash and adds significant debt to purchase similar pollution-control businesses, ADES could get stuck in the mud and/or decline in price.

The strategy I have employed in the shares is buying a stake with a number of orders between $6.52 and $6.80 last week, while selling out-of-the-money covered calls on a portion of the position to hedge some downside. As with other smaller- to micro-cap names I have mentioned in the past, expect greater volatility in Advanced Emissions Solutions than a regular blue-chip selection. If you do not sell covered calls, please consider placing a stop-sell order at a price 15-25% lower than your purchase cost, depending on the risk level you want to take.

Thanks for reading. Please consider this article a first step in your due diligence process. Consulting with a registered and experienced investment advisor is recommended before making any trade.

Paul Franke
18.04K Followers
Nationally ranked stock picker for 30 years. Victory Formation and Bottom Fishing Club quant-sort pioneer.....Paul Franke is a private investor and speculator with 36 years of trading experience. Mr. Franke was Editor and Publisher of the Maverick Investor® newsletter during the 1990s, widely quoted by CNBC®, Barron’s®, the Washington Post® and Investor’s Business Daily®. Paul was consistently ranked among top investment advisors nationally for stock market and commodity macro views by Timer Digest® during the 1990s. Mr. Franke was ranked #1 in the Motley Fool® CAPS stock picking contest during parts of 2008 and 2009, out of 60,000+ portfolios. Mr. Franke was Director of Research at Quantemonics Investing® from 2010-13, running several model portfolios on the Covestor.com mirror platform (including the least volatile, lowest beta, fully-invested equity portfolio on the site). As of August 2022, he was ranked in the Top 5% of bloggers by TipRanks® for stock picking performance on positions held one year. A contrarian stock picking style, along with daily algorithm analysis of fundamental and technical data have been developed into a system for finding stocks, named the “Victory Formation.” Supply/demand imbalances signaled by specific stock price and volume movements are a critical part of this formula for success. Mr. Franke suggests investors use 10% or 20% stop-loss levels on individual choices and a diversified approach of owning at least 50 well-positioned favorites to achieve regular stock market outperformance. The short sale of securities in overvalued, weak momentum stocks as pair trades and hedges is also a part of the Victory Formation long/short portfolio design. "Bottom Fishing Club" articles focus on deep-value candidates or stocks experiencing a major reversal in technical momentum to the upside. "Volume Breakout Report" articles discuss positive trend changes backed by strong price and volume trading action.

Disclosure: I/we have a beneficial long position in the shares of ADES either through stock ownership, options, or other derivatives. I wrote this article myself, and it expresses my own opinions. I am not receiving compensation for it (other than from Seeking Alpha). I have no business relationship with any company whose stock is mentioned in this article.

Additional disclosure: This writing is for informational purposes only. All opinions expressed herein are not investment recommendations, and are not meant to be relied upon in investment decisions. The author is not acting in an investment advisor capacity and is not a registered investment advisor. The author recommends investors consult a qualified investment advisor before making any trade. This article is not an investment research report, but an opinion written at a point in time. The author's opinions expressed herein address only a small cross-section of data related to an investment in securities mentioned. Any analysis presented is based on incomplete information, and is limited in scope and accuracy. The information and data in this article are obtained from sources believed to be reliable, but their accuracy and completeness are not guaranteed. Any and all opinions, estimates, and conclusions are based on the author's best judgment at the time of publication, and are subject to change without notice. Past performance is no guarantee of future returns.