A few days ago (November 4), Brighthouse Financial (NASDAQ:BHF) released its quarterly results and beat both revenue and EPS forecasts by 138.46% (GAAP) and 11.26%, respectively. Despite such a big surprise in EPS, the stock gained only 2.55% on the day after the release:

In this article, I will try to understand how such a market reaction is justified and whether BHF has a chance to show a strong rally before the next quarterly report.

First off, a few words about the company itself. Brighthouse Financial was formed in 2016 as a holding company to operate a substantial portion of MetLife, Inc.'s (MET) former retail segment. In 2017 it went public, but started to grow actively only after the 2020 collapse - current stock price still falls short of post-IPO prices:

The company operates in 3 segments (1 - "Annuities", 2 - "Life", and 3 - "Run-off") being one of the largest providers of annuity and life insurance products in the United States.

The company posted quite good revenue growth across its key operating segments in Q3 2021, even if we discard the impact of derivatives gains/losses.

Although sales from annuities, a key indicator for insurance companies, grew by only 1% in Q3 2021, YoY, FlexChoice Access (variable annuities) and Shield Level (index-linked annuities) combined grew by 54% compared with the 3rd quarter of 2020 - ahead of the management's expectations. The same is true for life insurance sales, which unexpectedly for management rose 4% (QoQ) in one fell swoop in Q3 2021 - in this regard, this segment showed quite good growth in earnings (minus some notable items). 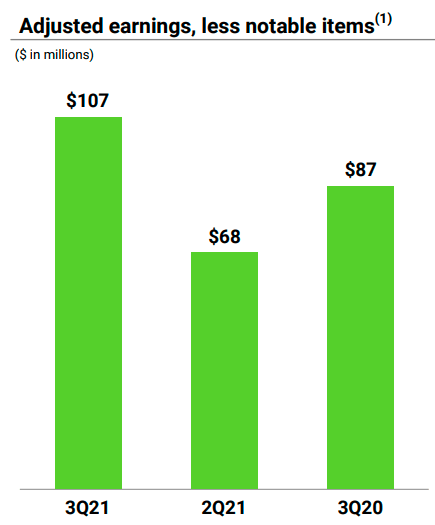 The 1% growth in sales from annuities can be considered quite strong because in the last quarter the total annuity net outflows to $ 587 million. According to the CEO, BHF "expects to see the continuation of a favorable shift in [its] business mix over time as [it] adds more cash flow generating and less capital-intensive new business, coupled with the runoff of older, less profitable business."

As a result of the qualitative execution of the above strategy, we can see the company is continuing to expand its footprint for SmartCare in the third quarter of 2021 and adding new firms, "resulting in approximately 14,000 additional financial professionals providing access to the product." In addition, some enhancements were introduced for Shield Level Annuities in August 2021 - according to BusinessWire, the "new features provide customers with more options to tailor the product to their individual needs."

As far as the company's balance sheet is concerned, we see certain successes here as well. The RBC ratio (combined risk-based capital) is between 520% and 540%, well above the target range of 400-450% under normal market conditions. In August, BHF paid an extraordinary dividend of $600 million to its parent, Brighthouse Life Insurance Company, being left with total liquid assets of $1.5 billion, down just 13.33% from Q4 2020.

Based on the above, it is clear that the market most likely underestimated this quarterly report - as I wrote in my recent article on Zillow Group (Z), during this quarterly reporting season, the market usually underestimates good results and punishes bad results harshly. The same thing has apparently happened with BHF. However, all this does not negate the causal relationship - a good quarter with many new opportunities and against a backdrop of financial stability is more likely to lead to a new round of rally, despite the stock's already good performance of 71.19% over the past year.

Why BHF is not going to stop growing?

First, as I mentioned above, the company's financial results will drive the stock higher until the next reporting season. This has happened before - in the second quarter of 2021, the company also reported results that a) beat expectations and b) forced analysts to raise their earnings per share and revenue forecasts. After that, the stock gained >30% by the time of the next report:

Now we see the same thing - a strong report (in some respects even stronger than the previous one, e.g. on the RBC ratio) and an increase in the consensus EPS forecast for the foreseeable future. 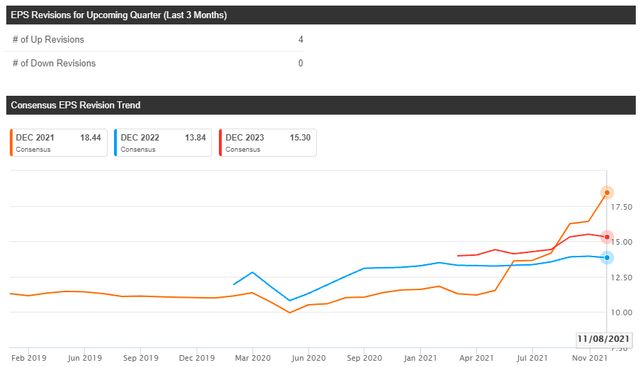 The second pillar to support future share growth is the existing share buyback program. In the last quarter, the company repurchased its own shares in the amount of $149 million. 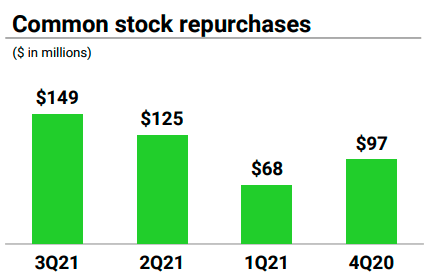 In total, BHF has bought back $1.4 billion worth of shares since the launch of its share buyback program (from August 2018) - equivalent to around 34% of its total float at that moment.

Just a week ago, on November 2, the company bought back its shares for another $61 million - confirming once again that management will not deviate from its plan to reach its $1.5 billion capital return target by the end of this year. I would remind you that there is $877 million left in the current $1 billion share buyback program announced in August of this year, which is good news.

The third reason to be optimistic about BHF is that the stock is severely undervalued. At the time of writing, BHF is still trading at 2.93 times its non-GAAP price-to-earnings ratio, well below the insurance sector. PTBV stands at just 0.278x, which is also quite low.

The rest of the market ratios are also very low and make BHF one of the most undervalued financial services companies in the United States: 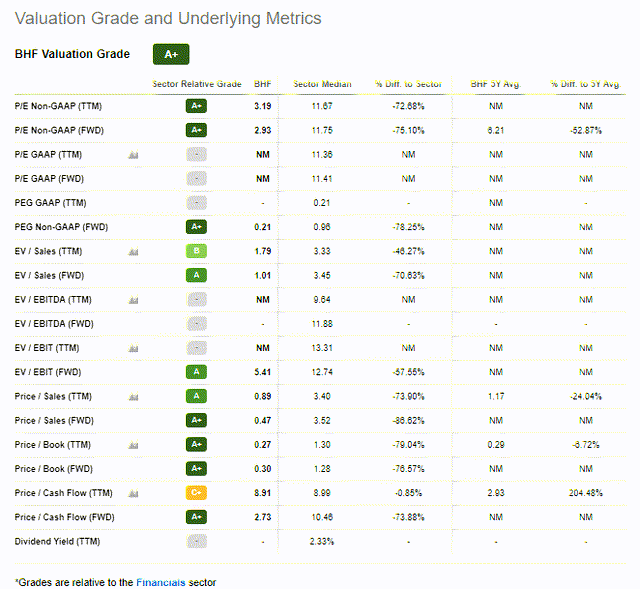 All this points to the existence of a comfortable "power reserve" for the growth of the quotations throughout Q4 and beyond.

The fourth reason I think BHF will most likely continue to grow is, oddly enough, the technical picture. Yes, the stock does not have very high liquidity in the market, which makes this point the weakest of all the above, but you also have to remember that strong momentum attracts a lot of swing traders, as evidenced by the activity of positive discussion about the stock on Twitter over the past 90 days: 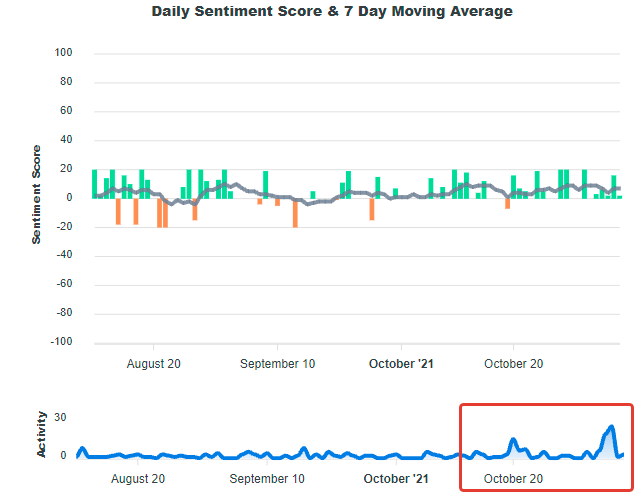 With new buyers in the market and a fairly active share buyback program, I expect the current bullish momentum to continue at least to $65-66 per share, up 20.45%-22.31% from the current market price of $53.96.

The main risk, in my opinion, is a possible "overheating" of the stock, as its performance over the past year has outperformed the rest of the insurance sector by an order of magnitude.

In addition, the use of derivatives in the company's operations adds additional risks - this can significantly reduce the potential net earnings in the future.

Be that as it may, there are more facts in favor of buying BHF even at such a high level than facts that contradict my investment thesis. So I think the current uptrend will continue, and I recommend you pay attention to BHF if you are a growth investor (the company pays no dividends - all the money goes into buybacks).

Danil Sereda
1.67K Followers
Ranked in the top 4% of financial bloggers by Tipranks (as of June 17, 2022, compared to the S&P 500 Index over a 1-year period).Currently employed as a Chief investment analyst at a small Singapore-registered family office.Mainly focused on special situations, IPOs, and undercovered/hidden stocks.BS in Finance. In my bachelor's thesis, I looked at finding the best statistical methods or machine learning methods to predict an underpricing of an IPO. That is what I was trying to implement in my IPO analysis here on Seeking Alpha.**Disclaimer: Associated with Oakoff Investments, another Seeking Alpha Contributor
Follow

Disclosure: I/we have no stock, option or similar derivative position in any of the companies mentioned, but may initiate a beneficial Long position through a purchase of the stock, or the purchase of call options or similar derivatives in BHF over the next 72 hours. I wrote this article myself, and it expresses my own opinions. I am not receiving compensation for it (other than from Seeking Alpha). I have no business relationship with any company whose stock is mentioned in this article.