No entity has a greater ability to toss money into the wind than our Federal government. In this article, we will look at three main factors that could spur electric car demand: The infrastructure bill, fuel prices, and EV credits. Concerning the infrastructure bill, two things that pop into my mind are: First, how much of this bill will go toward lithium and rare earth elements? Second, how does the government intend to combat inflation while printing up yet even more money? Topic #2 is outside the focus of this article, but it needs to be mentioned in passing.

Obviously, legislation can have a tremendous impact on one's investments. Hence, we are going to look at H.R.3684 (the Infrastructure bill) that has now passed the Senate and the House. Reading over this tomb of a document, we can see that two main avenues of funding will spring into existence under two different departments. The first is the "Office of Fossil Energy" at $3 billion and the second source of funding is via the "Office of Energy Efficiency and Renewable Energy" at an additional $3 billion. With the addition of smaller amounts, this totals $7.3 billion for lithium, recycling of lithium, and battery technology. As I have often said, "You had my curiosity; now you have my attention."

$7.3 Billion for Battery Materials Processing in the United States

An additional $3 billion can be found under the Office of Energy Efficiency and Renewable Energy which will go towards battery manufacturing and recycling.

Other Various Grants / Funding Include:

With the infrastructure deal, our focus should be American lithium companies and lithium recycling. Since the intent is to spur American lithium, we want to avoid foreign lithium. Hence our focus will be domestic players who are free from Chinese influence. It might be okay if our companies are Canadian based, as long as they have operations in the United States. This narrows it down to: Cypress Development (OTCQB:CYDVF), Standard Lithium (SLI), Dajin Lithium (OTCQB:DJIFF), Livent (LTHM), Albemarle (ALB), and American Battery Technology (OTCQB:ABML). I'm sure more exist, but these are the ones that come to mind as more domestic-minded plays. Lithium Americas (LAC) might qualify, but the Chinese connection makes me wonder. Each company has different risk profiles from low (such as Albemarle) to extreme (such as Dajin).

I fully expect we will see a mad rush to secure Federal money. Will the companies above try for it? I would reckon so. Can we directly bank on them being successful in their attempts? I would say no, but what it will do is spur lithium development in the United States. In turn, this could accelerate electric car adoption in the U.S. due to better technology (ranges, energy density, cost, better recycling, etc.). The 3rd order effect would be the companies benefit from greater demand.

Inflation is here. Fuel prices are elevated. Now we could argue the politics of this and whose fault this is, but it is what it is and we can profit from that. Look at the below graph and ponder if the Biden administration can get prices down or if they even really want to decrease prices? I have my doubts they do. Frankly, the higher it goes the more economic sense it makes for consumers to exit ICE (internal combustion engines) and move to electric. 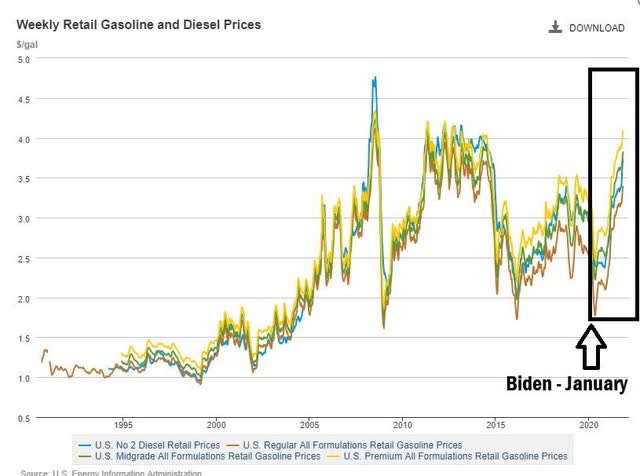 Meanwhile, the Biden administration is shutting down additional pipelines. Per an executive order Biden shut down the Keystone Pipeline and now the "Line 5 pipeline", which links Superior, WI to Sarnia, Ontario, could be shut down. This will do nothing to help regional fuel prices in the north, but in a moment of irony will spur additional oil shipments via truckers and rail.

Democrats are pushing a tax credit as part of the "Build Back Better" bill. Inflation concerns aside, this could spur electric car adoption. Per Electrek.co:

Now I'm going to shift the article to how I'm betting on lithium via Cypress Development as they are my favorite lithium company.

Ever seen the movie "Water World" with Kevin Costner? The basic premise is the entire world is underwater and everyone is searching for land. In Clayton Valley, Nevada the opposite is true. Clayton Valley, Nevada is "Desert World" and everyone is yearning for water. Only three companies have state-issued water rights in the entire valley (at least in any meaningful industrial quantity.) Given how oversubscribed the entire valley is, the odds of new water permits coming forth for large industrial use are low to none.

This brings us to just how important water is and how Cypress Development just advanced its lithium project.

He Who Controls The Water

Cypress Development broadcasted a significant event by announcing Nevada Division of Water Resources has extended the water rights that will ultimately flow to the company.

The closing of the purchase is projected for December.

Rather, one wants to enter negotiations from a position of strength and in Clayton Valley he who controls the water has strength. Given Cypress Developments water rights, they are one of three of the sole controllers of water in the valley. Hence, I deem Cypress "The Prince of Clayton Valley", while Albemarle is the "King of Clayton".

Let's glance at other American / Canadian long-term lithium plays. Since the soon-to-be-buyout of Neo Lithium (OTCQX:NTTHF), I have moved the bulk of those profits into Cypress Development. Other good plays exist as well, notably Standard Lithium (SLI) out of Arkansas (which I have written on); American Battery Technology Company (OTCQB:ABML) offers some intrigue as they could directly profit from the recycling bit of the infrastructure bill as well. Then we have in the ultra speculative corner Dajin Lithium (OTCQB:DJIFF).

I had a reader comment recently that demand was not present for lithium. I stared at this comment much like the scene from "American Psycho" where Patrick Bateman drops the business card. Thus I present for the masses:

All of that capital is not flowing into hard assets without an expected return.

As I conclude, let me digress a moment to explain my view on lithium. Back in the mid-90s I ran across a 3DFX Voodoo 2 Graphics card at my cousin's house. It is hard to put into words how mind-blowing it appeared (going from software graphics to hardware graphics in ID software's "Quake"). Instantly I knew every single gamer on planet Earth was going to buy into the GPU revolution: I was far ahead of the curve.

When I look at lithium I see the parallels. Consumers appear to be waking up to lithium. Why you ask? Simple. The governments are going to create many tax breaks to incentivize consumers to purchase them. Granted, the upfront costs are higher, but maintenance is lower. Acceleration for EV is mind-blowing. These factors could make electric cars popular.

I've been guilty in the past of trading too much, yet I've done quite well with it. However, when looking at lithium I have to reevaluate and query "What does lithium look like in 10 years?" I do not think I am alone in my thoughts as others are also speculating what the world might look like in the future. 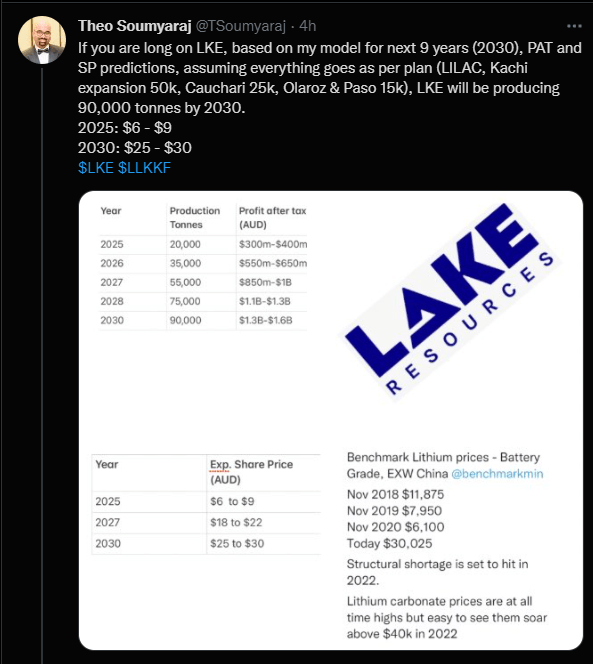 I would not get caught up in the numbers (as it is a 10-year projection), but the point is to think long term. I think Theo is on the right mental path. If you are planning on a long-term buy and hold, do you have the patience? In my opinion, the best way to endure the wait is to have two accounts. Use one to trade and one to hold.

The stock market is always risky. A crisis is always brewing somewhere but this offers opportunity. Yet, we are in a market where an entire crop of new investors has yet to experience a multi-year bear market. The day will come or maybe things continue to inflate "to infinity and beyond."

The point is to temper your expectations and always plan on an investment being hit by a black swan event. It could be cooking the books or a short group writing a hit piece. You never know. At the same time, the overwhelming demand and money flowing into lithium make me confident that lithium is the future. I am casting a very wide lithium net via various companies in the U.S., Canada, and Australian markets primarily. The take-away for the reader is to ponder the $7.32 billion that is flowing into lithium per the infrastructure bill, rising fuel prices, and EV credits. Then ask "Is this a good risk to reward" for your hard-earned capital given a long time frame? If so, then ponder who owns water rights.

How I'm Playing It

My strategy is rather simple. Buy a wide swath of lithium companies. Focus on smaller names that offer much reward and much risk. These names range from well-established players to (frankly) rolls of the dice. Not every play is going to pan out. Some will fail or not perform to immediate expectations. Others will flourish. The main idea is while you can bet heavily on a sector (or even a stock) you do not want to be in a situation where your bet deep sixes your account and it is "Game over. Insert coin to continue." Plan on disasters; plan on failure; if you survive the stock market Hunger Games along enough you will experience loss. Yet at the same time, given the lithium demand, we can expect some degree of success as this is a sector play. Hence, if we make educated and well-researched investments, we can prosper. To quote Indiana Jones in The Last Crusade: "You must choose, but choose wisely."

Austin Craig
6.91K Followers
"Never let formal education get in the way of your learning". - Mark Twain,,,You are here for one reason. You want "actionable Intelligence". If you wanted a history lesson on a company then Google is your friend. My aim is to provide intelligence that you can read, ponder, and then execute upon to make a profit or avoid a loss. A price of a stock is almost irrelevant. It is the last thing to consider when buying a stock. If you don't pay attention to management, financials (go back 3 years), the sector, global macros, your portfolio mix, along with risk/reward for capital used and the company news, you are ignoring all of the things that come before price. Price is mostly real-time sentiment. It is hardly ever a good indicator of value.People who only look at price will fail as investors, because price is a result of fundamentals, news, and sentiment. You have to learn to "take" from the market, if at all possible, make it give you what you want.Use targets, set limits, protect your capital with stops and if something changes fundamentally, review, review, review.You can't read too much. If it was easy everyone would be doing it. Now you have no reason to not get Alpha.

Disclosure: I/we have a beneficial long position in the shares of CYDVF either through stock ownership, options, or other derivatives. I wrote this article myself, and it expresses my own opinions. I am not receiving compensation for it (other than from Seeking Alpha). I have no business relationship with any company whose stock is mentioned in this article.