One of the biggest winners on Monday turned out to be shares of chipmaker Advanced Micro Devices (NASDAQ:AMD). Shares of the stock finished the day up double digits percentage wise after the company announced some positive news regarding its data center business. Interestingly enough, the move in shares only added to the extreme discount that shares of Xilinx (XLNX) trade at as AMD looks to finish up that acquisition in the near term.

The biggest news of the day was that AMD will supply chips for data centers in Meta Platforms' (FB) Facebook segment. As AMD continues to win new business, competitor Intel (INTC) is left in the dust, and Nvidia (NVDA) also can be seen as a loser here. AMD also announced on Monday that it will be making a new version of its Epyc processor with extra memory, which Microsoft (MSFT) will use in an offering linked to its Azure cloud service.

Making large in-roads in the data center space is key to AMD's long-term growth plan. As you can see in the graphic below, revenue growth is expected to rise nicely in the coming years, and I believe that most to all of these estimates don't even include contributions from Xilinx at the moment. For those worried about the growth percentage dropping a bit, don't forget that when 2020 ended, analysts were calling for just $12.05 billion in revenue this year. Currently, the average estimate is more than $4 billion higher, and it wouldn't surprise me if the actual number ends up being around $16.25 billion. 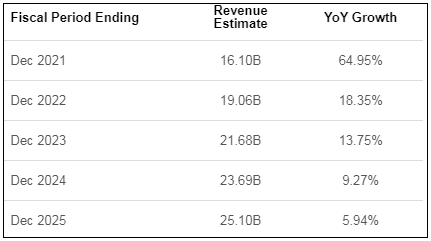 AMD investors were looking forward to some news on Monday with the company's planned data center event. However, most people were likely just looking forward to some new chips being announced. I also heard from some investors recently wondering if the Xilinx deal would be completed before today given the pending dividend payment. Instead, these major deals with Facebook and Microsoft really cemented AMD's progress in this space over the last couple of years.

AMD shares started the year under $92, and they had rocketed to over $136 by Friday's close. Adding on another 10% plus put the stock up nearly 50% for the year and gives the company a valuation approaching $200 billion. Perhaps the most interesting item in my opinion though was that we saw the Xilinx spread blow out again, as the chart below shows.

When I first started working on this article, the Xilinx discount was just under $60, but it came down a bit by Tuesday's close. AMD management continues to believe the deal will close before year's end, so I just don't understand why there is such a large gap right now. The market seems to be really worried that a deal won't go through because buying Xilinx right now at $205 and change would get you more than 1.72 shares of AMD, which would be worth almost $256 at current prices.

In the end, AMD's news regarding Facebook and Microsoft on Monday was a definite positive for the company's data center business. This will add to AMD's revenue profile in the coming years, helping the name head above $20 billion in annual sales. As you might expect, AMD shares soared on the news, but the recent rally also blew out the Xilinx spread yet again, providing an intriguing arbitrage opportunity for those willing to take the risk.

Bill Maurer
33.33K Followers
I am a market enthusiast and part-time trader. I started writing for Seeking Alpha in 2011, and it has been a tremendous opportunity and learning experience. I have been interested in the markets since elementary school, and hope to pursue a career in the investment management industry. I have been active in the markets for several years, and am primarily focused on long/short equities. I hold a Bachelor of Science Degree from Lehigh University, where I double majored in Finance and Accounting, with a minor in History. My major track focused on Investments and Financial Analysis. While at Lehigh, I was the Head Portfolio Manager of the Investment Management Group, a student group that manages three portfolios, one long/short and two long only. I have had two internships, one a summer internship at a large bank, and another helping to manage the Lehigh University Endowment for nearly a year. Disclaimer: Bill reminds investors to always do their own due diligence on any investment, and to consult their own financial adviser or representative when necessary. Any material provided is intended as general information only, and should not be considered or relied upon as a formal investment recommendation.

Disclosure: I/we have no stock, option or similar derivative position in any of the companies mentioned, but may initiate a beneficial Long position through a purchase of the stock, or the purchase of call options or similar derivatives in XLNX over the next 72 hours. I wrote this article myself, and it expresses my own opinions. I am not receiving compensation for it (other than from Seeking Alpha). I have no business relationship with any company whose stock is mentioned in this article.