Cyclo Therapeutics' (NASDAQ:CYTH) launch into the Alzheimer’s field began with one case study that produced the following results:

After 18 months, the patient showed neurologic and cognitive stability: this is a positive outcome given that persons with Alzheimer’s Disease dementia are generally expected to decline during an 18-month timeframe. Speech fluency also improved as documented by the treating physician’s report of a decrease latency to word-finding. In addition, mood and behavioral features of the disease improved, such as less agitation, as noted by the patient, the patient’s family, and the treating physician (source of quote).

The company will soon begin a phase 2 clinical trial for its drug candidate Trappsol Cyclo for Alzheimer’s disease. The evidence for the potential success of Trappsol Cyclo comes from multiple sources including the results from a Niemann Pick Type C disease (sometimes called childhood Alzheimer’s) trial, mechanisms of action, mice studies, and trial results from other drug candidates/natural products containing the same or similar compounds. None of these by themselves may be persuasive, but when woven together they indicate a strong potential for success.

Whether a similar pattern will also be seen in patients with Alzheimer’s disease is not a given. But here is why it is a distinct possibility. First, reducing cholesterol levels shrinks the size of lipid rafts which are table setters for the onset and early progression of Alzheimer’s disease (source of chart). 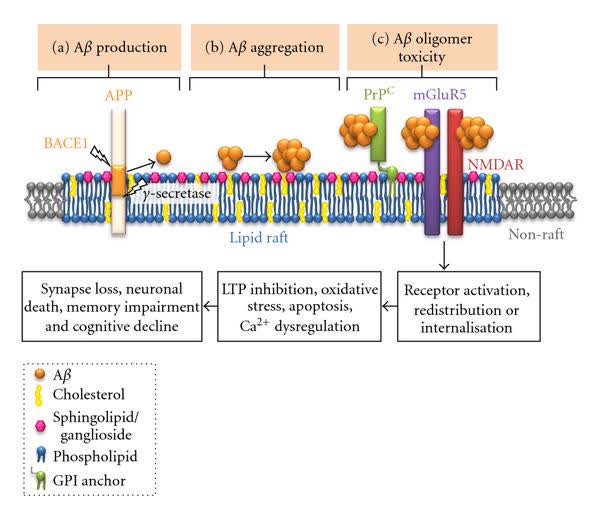 Lipid rafts not only enhance amyloid oligomer toxicity, they also enhance the toxicity of many other factors (such as environmental toxins, viral, bacterial, and fungal infections, an unhealthy diet high in salt and sugar and other carbohydrates, and psychological stress) that can initially trigger Alzheimer’s disease. In theory, then, reducing cholesterol levels should reduce the risk and slow the progression of Alzheimer’s disease especially in ApoE4 carriers (since they have higher levels of cholesterol in their brain to begin with).

Secondly, Trappsol Cyclo scavenges peroxynitrite (ONOO-) which is critical to inhibiting the progression of Alzheimer’s disease (source of diagram). 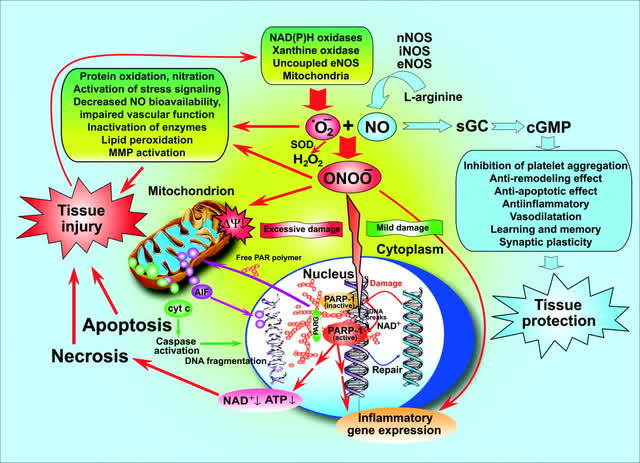 Peroxynitrite nitrates the phosphatidylinositol 3-kinase which ultimately reduces blood flow in the brain, prevents the regeneration of neurons, synapses, and axons, and contributes to the misfolding of tau proteins which inhibits neurotransmissions. Peroxynitrite’s oxidation of muscarinic acetylcholine, serotonin, melatonin, dopamine, and oxytocin receptors negatively affects memory, mood, sleep, alertness, and social recognition. Peroxynitrite oxidation and nitration of choline transport systems and choline acetyltransferases (which produce acetylcholine) further inhibits the ability of someone with Alzheimer’s disease to retrieve short-term memories. And finally, peroxynitrite activates caspase-3 which plays a role in amyloid formation, DNA damage, mitochondrial dysfunction, and the death of neurons.

The key to the treatment of Alzheimer’s disease then is likely the following:

HPBCD, which crosses the blood-brain barrier, does all three. It inhibits the formation of peroxynitrite through reduction of lipid rafts, it scavenges peroxynitrite through the donation of hydrogen atoms and electrons, and it partially reverses oxidation through the same process and contributes to denitration via water (a product of peroxynitrite scavenging). Thus, all the problems listed above, along with those shown in the diagram are at least partially reversed.

The chances of Trappsol Cyclo producing similar results over long periods of time are quite good. It does have to be given intravenously but, if shown to be safe and effective, most caregivers and their loved ones would probably choose to take it.

Cyclo Therapeutics has somewhere between 8 and 10 million dollars cash on hand. It also has about 20 million in at the market offerings (ATM) which it may turn to after it submits its Investigational New Drug application with the FDA sometime near the end of this year.

Lane Simonian
2.28K Followers
Retired history instructor. Alzheimer's disease researcher for the past decade.My goal is to give investors solid advice based on the mechanisms of action of Alzheimer's drugs.  This advice is informed by  a background in biology (conservation, ecology, evolution, environmental science, and biochemistry) and seventeen years of a very in depth review of the research on Alzheimer's disease.