This article is part of a series that provides an ongoing analysis of the changes made to David Einhorn’s Greenlight Capital 13F portfolio on a quarterly basis. It is based on Einhorn’s regulatory 13F Form filed on 11/15/2021. Please visit our Tracking David Einhorn's Greenlight Capital Holdings article series for an idea on his investment philosophy and our previous update for the fund’s moves during Q2 2021.

Greenlight Capital’s 13F portfolio value stood at $1.49B this quarter. It is down ~6% compared to $1.59B as of last quarter. Einhorn’s Q3 2021 letter reported that the fund returned negative 2.6% for Q3 2021. This is compared to 0.6% for the S&P 500 Index. In addition to partner stakes, the fund also invests the float of Greenlight Capital Re (NASDAQ:GLRE). To learn about David Einhorn and the perils of shorting, check-out his “Fooling Some of the People All of the Time, A Long Short (and Now Complete) Story”.

SPDR S&P 500 ETF (SPY) and TD SYNNEX Corporation (SNX): These two very small (less than ~1% of the portfolio each) positions were eliminated this quarter.

Note 1: Greenlight highlighted their bullish thesis on BHF in their Q3 2021 shareholder letter: the runoff business that was suspected to be a drain is proven as false. BV is now $175 and there is a new $1B repurchase authorization. This is after a 30% share count reduction from the previous authorization.

Note 2: BHF is a spinoff of MetLife’s (MET) U.S. Retail business (annuities and life insurance) that started trading in July 2017.

The ODP Corporation (ODP): ODP is a ~3% of the portfolio position primarily built over the last two quarters at prices between ~$39 and ~$50. The stock currently trades at $42.22.

Danimer Scientific (DNMR): The 2.58% of the portfolio DNMR stake came about following the ~$700M EV De-SPAC transaction with Live Oak Acquisition that closed in December. Greenlight’s stake goes back to earlier funding rounds done a year ago. There was a ~25% stake increase in Q1 2021 at prices between ~$22 and ~$64. That was followed with a ~12% stake increase this quarter. DNMR currently trades at $16.20.

Note: Greenlight had a very successful (4x returns) previous roundtrip with Chemours in the two-year period that ended in Q1 2018.

CONSOL Energy (CEIX): CEIX is a 3.70% of the portfolio position that came about as a result of the merger with Consol Coal Resources that closed in December. Terms called for 0.73 shares of Consol Energy for each share of Consol Coal held. Greenlight had a position in Consol Coal for which they received these shares. There was a ~30% reduction in Q1 2021 at prices between ~$6.75 and ~$12.20. That was followed with a ~25% selling last quarter at prices between ~$8.75 and ~$18.70. CEIX currently trades at $24.26. There was a minor ~2% trimming this quarter.

Note: Greenlight has a ~6% ownership stake in Consol Energy.

fuboTV (FUBO): FUBO had an IPO last October. Shares started trading at ~$12 and currently goes for ~$24. Greenlight’s stake goes back to earlier funding rounds and their cost-basis is ~$5 per share. Q1 2021 saw the stake reduced by roughly two-thirds at prices between ~$21 and ~$52.40. There was a ~10% stake increase last quarter while this quarter there was another one-third reduction. The stake is now at 0.52% of the portfolio.

Graphic Packaging Holding (GPK) and Gulfport Energy (GPOR): These two very small (less than ~1% of the portfolio each) stakes were reduced during the quarter.

Green Brick Partners (GRBK): GRBK is currently the largest position at ~24% of the 13F portfolio. The stake was acquired as a result of BioFuel Energy’s JGBL Builder Finance acquisition and rename transaction. The deal closed (October 2014) with Greenlight owning 49% of the business. David Einhorn was appointed Chairman of the Board following the transaction. Q1 2021 saw a ~28% selling at ~$20.50 per share through an underwritten offering. They still own just over one-third of the business. The stock currently trades at $26.85.

Note: Greenlight controls ~5.5% of the business.

The spreadsheet below highlights changes to Greenlight’s 13F stock holdings in Q3 2021: 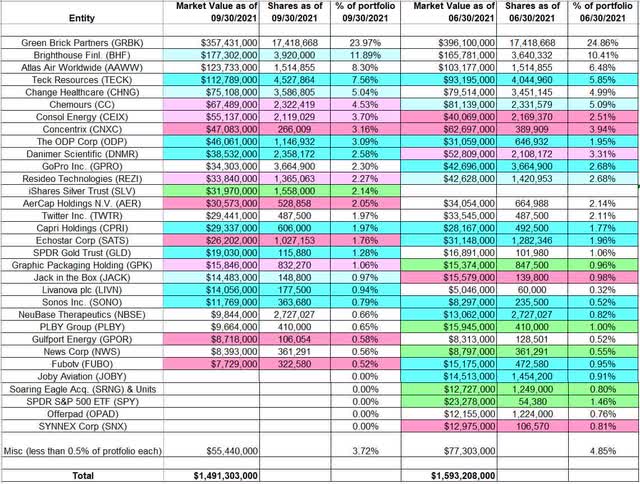 John Vincent
21.97K Followers
Focused on cloning strategies by analyzing 13F reports of a curated set of around fifty super-investors and generating Absolute Returns thru exploiting inefficiency, volatility, and momentum.

Disclosure: I/we have a beneficial long position in the shares of JOBY, ME, NUVB, PSFE, PTRA, TWTR either through stock ownership, options, or other derivatives. I wrote this article myself, and it expresses my own opinions. I am not receiving compensation for it (other than from Seeking Alpha). I have no business relationship with any company whose stock is mentioned in this article.