Nurix Therapeutics, Inc. (NASDAQ:NRIX) is a clinical stage biopharmaceutical company advancing a unique therapeutic approach of targeted protein modulation (TPM) for the treatment of a broad range of diseases, with a present focus on cancer treatment, including the development of small molecule immuno-oncology agents. The Company’s drug candidates are designed to harness the body’s natural process to modulate protein levels, by controlling ubiquitin E3 ligases, the key enzymes responsible for synthesis of new proteins and the destruction of defective proteins in human cells. Nurix has built an integrated discovery platform called DELigase, leveraging its proprietary DNA-encoded libraries (DEL) along with its expertise in E3 ligases. The DELigase platform can identify and advance novel drug candidates capable of modulating proteins within the cell. The Company presented updates and initial analysis from its various programs on 10/27/2021. Although Wall Street seems very bullish on NRIX, I remain neutral until I see more data.

The Company’s highly differentiated DELigase platform enables the identification of small molecules that can increase or decrease protein levels, specifically by harnessing or inhibiting E3 ligases. DEL has more than one billion molecules each with a unique DNA tag. The DEL is used to find binders for target proteins as well as E3 ligases, which provides the key starting materials for the TPM process.

Targeted protein degradation (TPD) is a new generation of therapeutics in which small molecules termed chimeric targeting molecules ((CTMs)) are designed to simultaneously bind an E3 ligase (with a harness) and a target protein (with a hook), facilitating the transfer of ubiquitin (via the linker) onto that target protein, causing its destruction.

While TPD degrades a specific disease causing protein, ligase inhibition (LI) works by inhibiting a target ligase, preventing degradation and consequently raising the level of proteins that are controlled by that ligase. The Company has chosen casitas B-lineage lymphoma proto-oncogene-b (CBL-B) as its first LI target. CBL-B is a highly specific E3 ubiquitin ligase that functions primarily in immune cells to negatively regulate T cell and NK cell activation and immune response. Inhibiting CBL-B activates T cells, which together with the immune system can be mobilized to destroy a tumor. 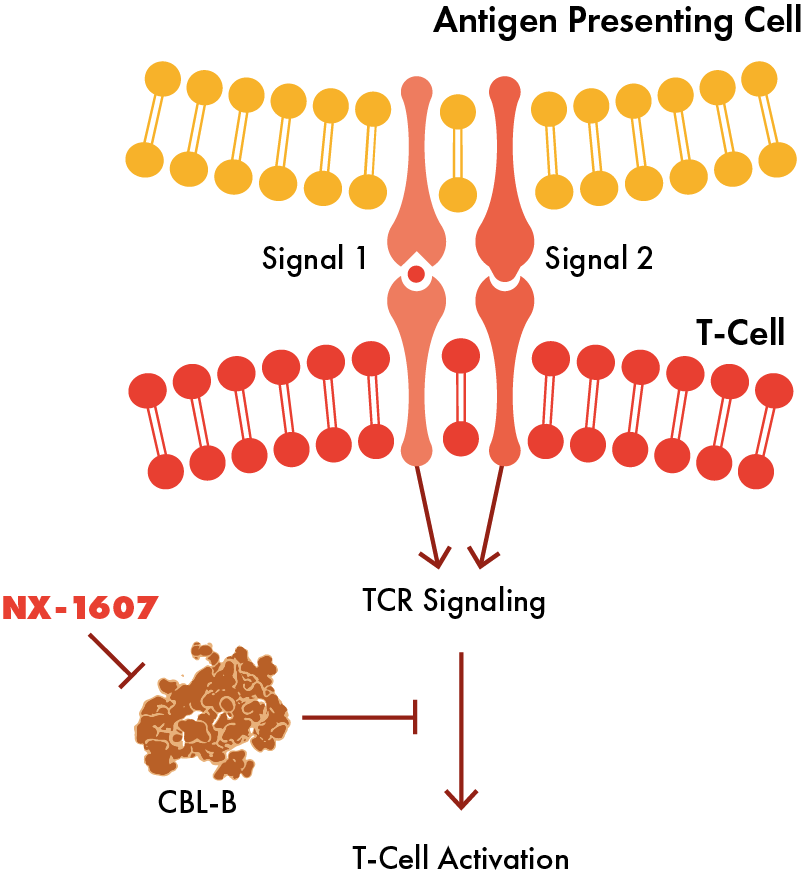 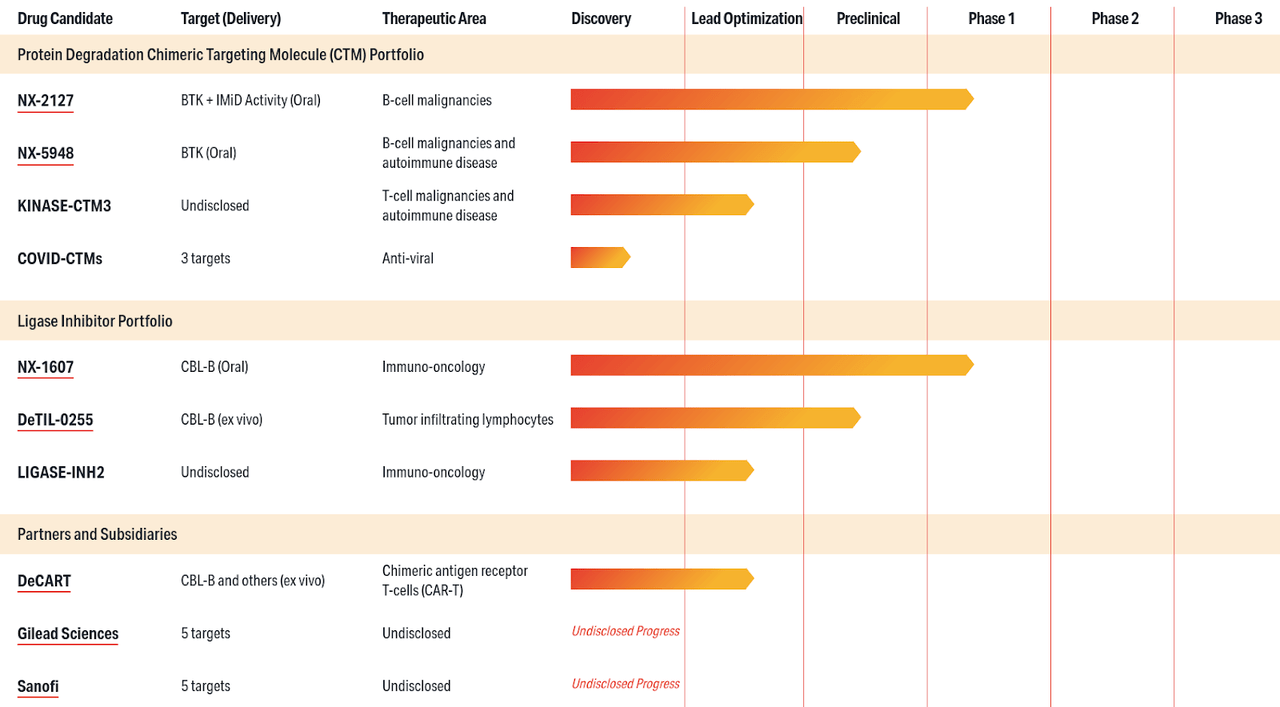 The Company’s lead drug candidates in the TPD arm are degraders of Bruton’s tyrosine kinase (BTK), a master regulator of B-cell activity, and a validated clinical target for the treatment of B-cell mediated hematologic malignancies such as non-Hodgkin lymphoma (NHL), and chronic lymphocytic leukemia (CLL), and B-cell mediated autoimmune diseases such as graft versus host disease (GVHD). Several approved BTK inhibitors are standard of care ((SoC)) across multiple tumor types. The Company believes that removal of the BTK protein through TPD could provide superior outcomes for patients who can no longer respond to or cannot tolerate SoC therapies. The Company’s BTK degrader candidates harness cereblon, an E3 ligase active in hematopoietic cells. Cereblon itself is also the target of immunomodulatory imide drugs ((IMiDs)).

NX-2127 is an oral small molecule combining the BTK TPD with the therapeutic activity of IMiDs such as Revlimid (lenalidomide) and Pomalyst (pomalidomide), which are FDA approved for hematologic malignancies including follicular lymphoma, mantle cell lymphoma, and multiple myeloma. Preclinical data demonstrated activity of NX-2127 in tumor models with wild-type BTK or mutated BTK with clinical resistance to FDA approved agents. Potent BTK degradation was observed in studies in non-human primates with once daily oral dosing. The Company is presently enrolling for the ongoing Phase 1 trial of NX-2127 for patients with relapsed or refractory B-cell malignancies who have failed prior treatments. Initial data representing the first proof of mechanism of TPD in patients with hematologic malignancies was announced on 10/27/2021.

NX-5948 is an oral small molecule degrader of BTK being advanced as a monotherapy for B-cell malignancies and autoimmune disease. Preclinical data demonstrated activity of NX-5948 in tumor models with wild-type BTK or mutated BTK with clinical resistance to FDA approved agents. The candidate also demonstrated activity in animal models of autoimmune disease, and the ability to cross the blood brain barrier (BBB). The Company presented preclinical data from its NX-5948 program at the EULAR 2021 Virtual Congress June 2021, demonstrating robust resolution of symptoms and inflammation in an animal model of arthritis with daily oral dosing. The Company plans to initiate phase 1 trial of NX-5948 in hematologic malignancies in 2H-2021.

The Company’s lead drug candidate in the LI arm is NX-1607, an oral, small molecule CBL-B inhibitor for solid tumors. NX-1607 demonstrated anti-tumor activity and prolonged survival in preclinical animal models of colorectal cancer, and triple negative breast cancer. Combining the candidate with anti-PD-1 antibody showed additional benefit in animal models. The Company plans to develop NX-1607 in multiple solid tumors as monotherapy or in combination with other complementary therapies like anti-PD-1 antibodies. Presently a phase 1 trial of NX-1607 as a monotherapy in multiple oncology indications is ongoing.

Nurix is also developing TPM based adoptive cell therapy candidates. The Company’s proprietary small molecule CBL-B inhibitor, NX-0255 is applied ex vivo to a cancer patient’s T cells enhancing their tumor killing ability when they are returned to the patient as an autologous cell therapy. Beneficial effects include increased T cell proliferation and reduced T cell exhaustion, stimulation of IL-2 secretion, and skewing the T cell phenotypes for improved outcomes. DeTIL-0255 is such a cellular therapy that incorporates NX-0255 in the cell expansion process of tumor infiltrating lymphocytes (TIL), hence the name drug-enhanced TIL, or DeTIL. The candidate will be developed first as monotherapy in multiple solid tumors, then later as combo therapy with NX-1607. The U.S. Food and Drug Administration (FDA) has cleared the Company’s investigational new drug (IND) application for DeTIL-0255. An open-label, non-randomized phase 1 clinical trial of DeTIL-0255 in gynecological malignancies is planned to be initiated by end-2021.

Another adoptive cell therapy program involves drug-enhanced chimeric antigen receptor (CAR) T cell therapies for hematological and solid tumors, being developed through a subsidiary DeCART Therapeutics, founded in June 2020 by Nurix and world-renowned physician and scientist Dr. Carl June, in collaboration with his colleagues from the University of Pennsylvania ((UoP)).

The Company does not yet generate revenue from sales of products but has accounted for collaboration revenue of approximately $22 million in the nine months ended 8/31/2021. The Company entered into a global strategic collaboration agreement with Gilead (GILD), in June 2019, amended August 2019, to discover, develop and commercialize a pipeline of TPD drugs for patients with cancer and other challenging diseases, using the Company’s DELigase platform identified novel agents utilizing E3 ligases, to induce degradation of five specified drug targets. In addition to the upfront and other payments totaling approximately $64 million received up to 8/31/2021, the Company is eligible to receive up to approximately $2.3 billion in total additional payments, and tiered royalties “from mid-single digit to low tens percentages on annual net sales from any commercial products directed to the optioned collaboration targets, subject to certain reductions and excluding sales in the United States of any products for which the Company exercises its option to co-develop and co-promote, for which the Company and Gilead share profits and losses evenly.” [10-Q page 12].

The Company entered into a strategic collaboration with Genzyme Corporation, a subsidiary of Sanofi (SNY), effective January 2020, and expanded January 2021, to discover, develop and commercialize a pipeline of TPD drugs for patients with challenging diseases in multiple therapeutic areas, using the Company’s DELigase platform to identify small molecules designed to induce degradation of five specified drug targets, which Sanofi may elect to replace over time with other reserved targets, subject to certain limitations. In addition to the $77 million received up to 8/31/2021, the Company is eligible to receive up to approximately $2.5 billion in total payments, and tiered royalties “from mid-single digit to low teen percentages on annual net sales of any commercial products that may result from the collaboration, subject to certain reductions and excluding sales in the United States of any products for which the Company exercises its option to co-develop and co-promote, for which the parties share profits and losses evenly.” [10-Q page 13]

Since inception, the Company has generally incurred significant losses and negative net cash flows from its operations. Accumulated deficit was $183.2 million as of 8/31/2021. Substantial additional capital will be required for research and development activities, and the Company anticipates incurring additional losses until such time, if ever, that it can generate sales from its drug candidates in the pipeline.

The Company is an “emerging growth company” and a “smaller reporting company” and has elected to take advantage of the reduced reporting and/or compliance requirements.

The Company’s portfolio of drug candidates is at an early stage and consists only of patent applications, and the Company does not currently own or license any issued patents covering its drug candidates.

Nurix is covered by eight Wall Street analysts with an average rating of very bullish (4.5/5) and an average price target of $51. This Company with a novel therapeutic approach that has demonstrated promising results in preclinical studies, and multi-billion-dollar collaborations with big pharma, has less than 2% shareholding from the public. The lack of issued patent base, owned or in-licensed, seems to be a dampener. I look forward to seeing more clinical data from this company.

Our Android app and website features a set of tools for DIY investors, including a work-in-progress software where you can enter any ticker and get extensive curated research material.