If you're like most Americans, inflation is a major concern right now. 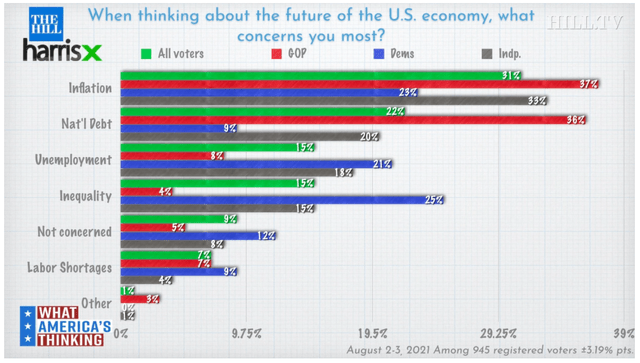 Inflation rates are rising at the fastest rate in recorded history.

The current acceleration in inflation is something you'd expect to see once every 10,000 years. And the official 6.2% inflation rate might be understating things a bit. 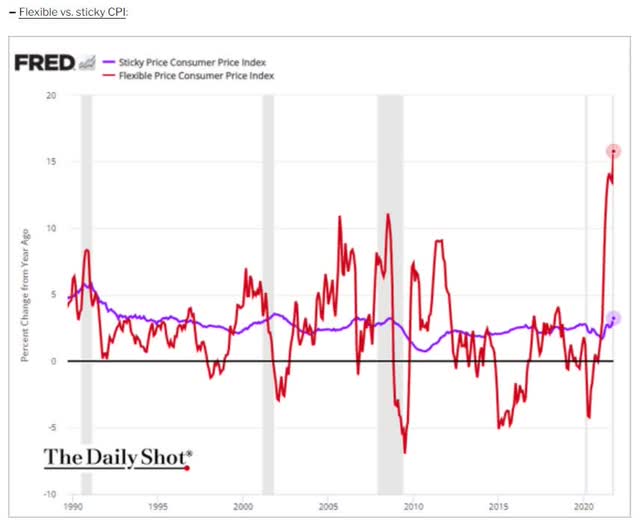 For many things consumers buy, inflation is actually 15.2%. 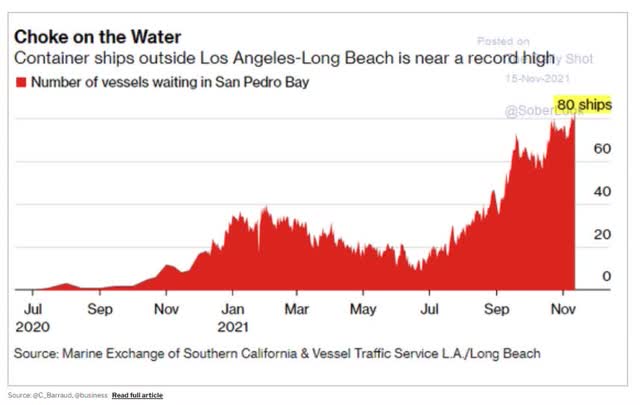 Shipping remains a major bottleneck with a record 80 ships waiting off LA and Long Beach to unload their cargo. For context, normally the number is zero because ships radio their arrival times two weeks in advance. 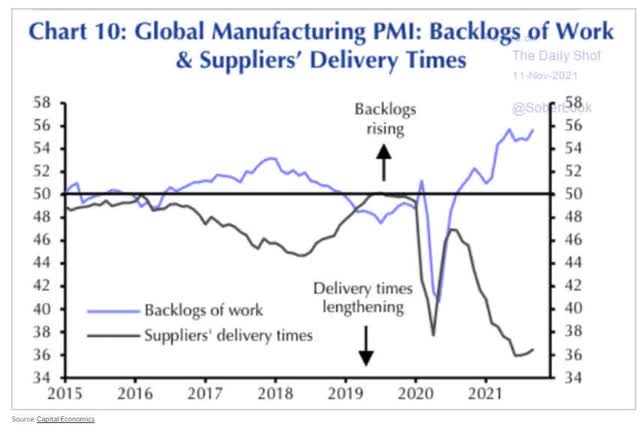 The supply chain backlog is getting worse, not better, at least for now. 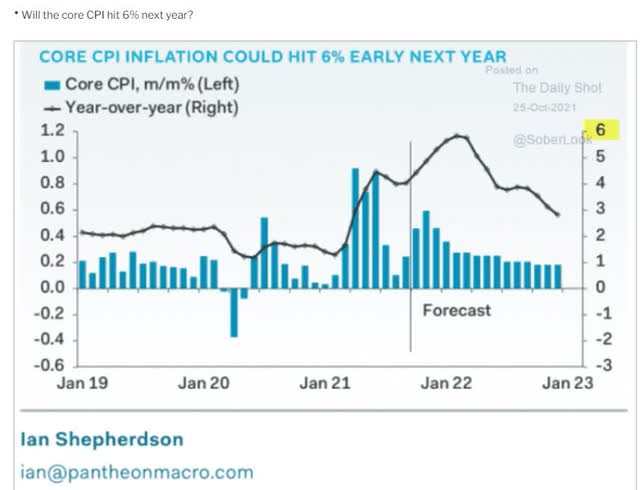 Some economists think that inflation will peak in early 2022 at 6% core and 8% reported CPI. 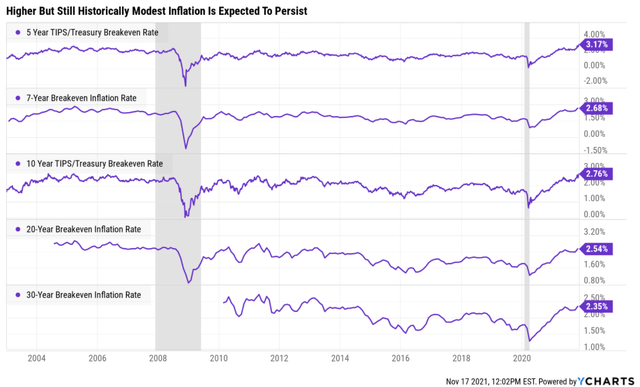 The bond market expects higher inflation to persist for the next few years, and even to remain above the Fed's 2% target for the next three decades. 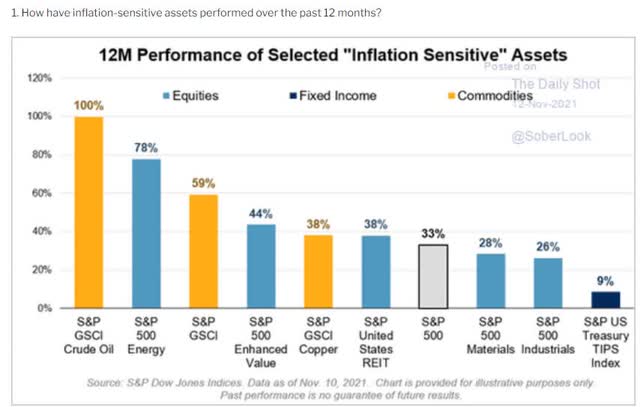 Fortunately, if you own assets, such as stocks, you're keeping ahead of inflation, even if it's actually 15% right now.

But what about today? The market is up 33% in the last year and now 30% historically overvalued according to JPMorgan. 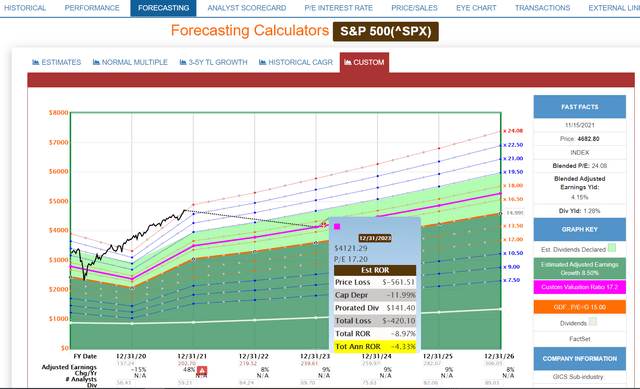 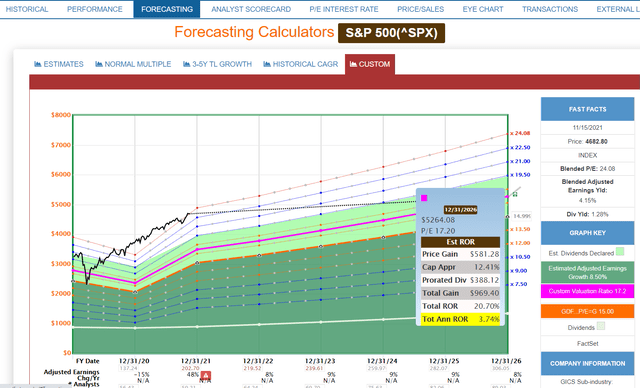 Analysts expect the S&P 500 to deliver about 21% total returns over the next five years.

Adjusted for inflation, the risk-expected returns of the S&P 500 are negative for the next five years. This is a return-free risk.

But never fear, because something wonderful is always on sale, and today I want to point out a surprising sector that is historically the best way to fight inflation.

For a decade investors have believed that REITs are a bond alternative and thus rising rates and inflation are bad for this high-yield sector. 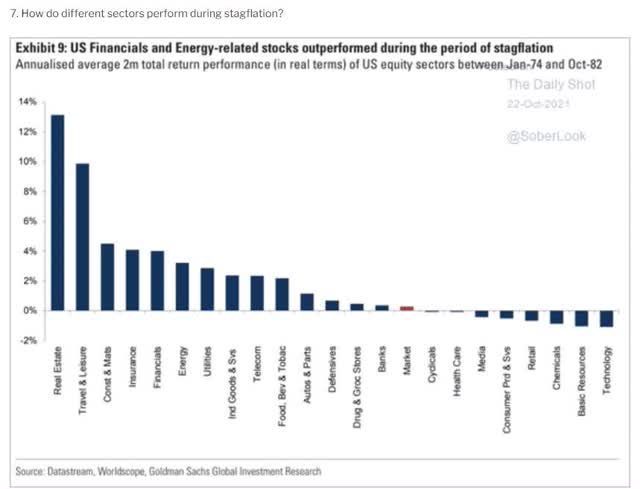 Actually, in the 1970s REITs were the best performing sector delivering 14% inflation-adjusted returns! 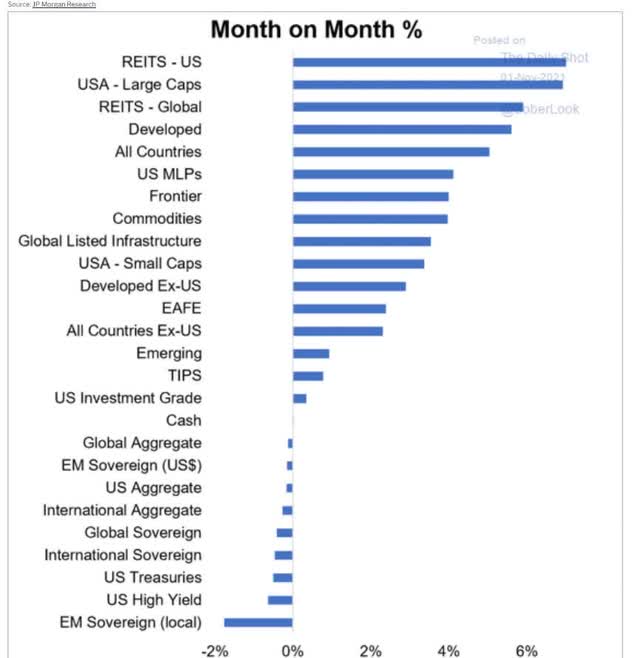 In the month with the highest inflation in 31 years, REITs are up 6%, the #1 investment strategy.

How can this be? Because REITs are able to raise rents to keep up with inflation, thus growing cash flows and dividends.

Or to put it more simply, when cash is falling in value at a historic rate, hard assets that produce steady and rising income are worth their weight in gold. 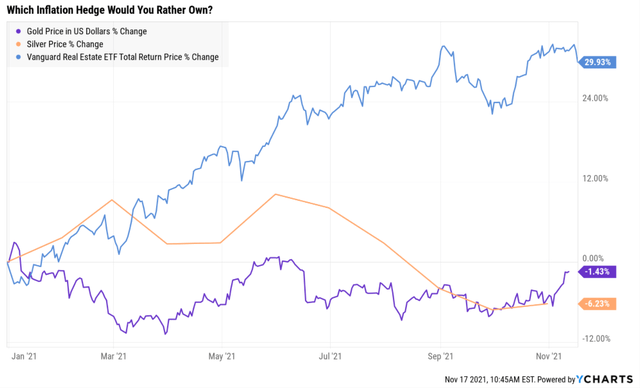 Actually, REITs are a much better inflation hedge than gold or silver this year.

But hold on a minute! If REITs are up 38% in the last year and 30% YTD, then aren't they also overvalued? 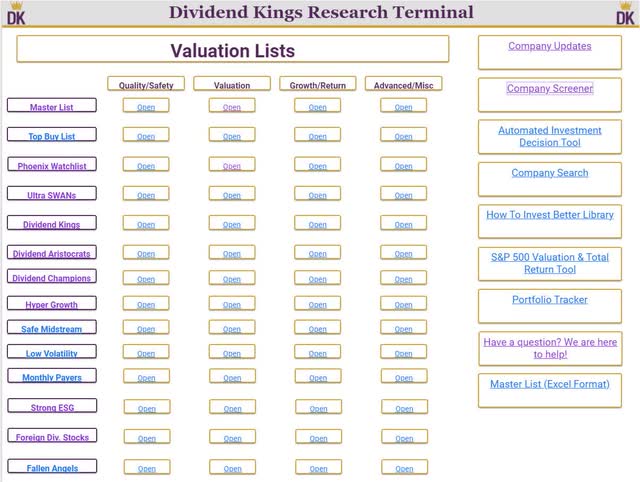 In the DK research terminal, we have a company screener that can let you easily find the best companies for any need or goal. Here I've screened for just REITs. 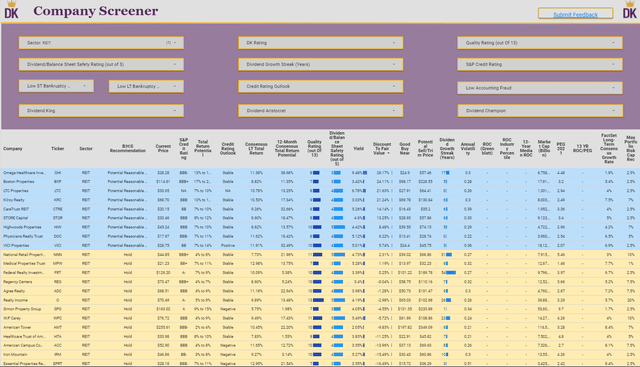 There are 46 REITs on the list right now and nine of them are undervalued, making them potentially reasonable buys.

My personal favorite recommendations are KRC, HIW, VICI, and STOR due to their strong combinations of quality, safety, attractive yield, and relatively strong consensus growth forecasts.

These nine reasonably priced REITs are expected to slightly outperform the S&P 500 over the long term, just as they have since 1998.

The future doesn't repeat, but it often rhymes" - Mark Twain

Past performance is no guarantee of future results, but studies show that blue-chips with relatively stable fundamentals over time offer predictable returns based on yield, growth, and valuation mean reversion. 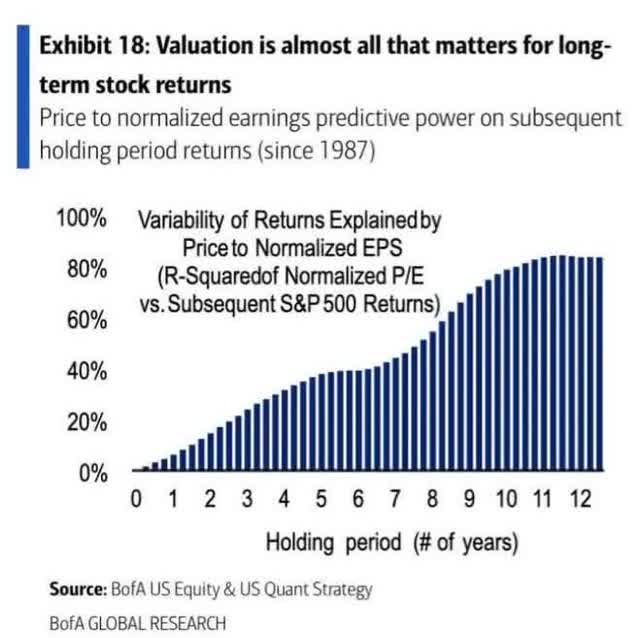 So let's take a look at how these nine reasonably priced, inflation-fighting REITs have performed over the last 21 years, a period of time in which 91% of returns were purely a result of fundamentals.

Analysts expect 10.2% CAGR long-term returns from these reasonably priced REITs, which is exactly what they delivered over the last 21 years.

Their income growth, including dividend reinvestment, was 4.5X the 2.1% average inflation rate of the last 21 years.

Risk Profile: Why All These REITs Aren't Right For Everyone

Being 100% invested in a single sector is poor risk management because it can expose you to both very high volatility and even income declines if a sector is struck by a black swan event.

For example, in the early 2000s, Medicare reform created an industry apocalypse for skilled nursing facility REITs like OHI and LTC.

This resulted in significant income declines if this was your entire portfolio. Similarly, the Great Recession saw about 75% of REITs cut or suspend their dividends though these nine cut theirs a lot less than most.

What kind of volatility does a 100% REIT portfolio deliver over time?

What about the future? While no one has a crystal ball we can use 21 years of historical data to estimate an 80% probability of how these nine reasonably priced REITs might perform in future recessions and market downturns.

Let me be clear that the purpose of long-term Monte Carlo simulations is NOT to imply that it requires 75 years for an investment thesis to play out.

Rather this is a statistical way to estimate, based on the past 21 years, what can be realistically expected, with 80% confidence to occur in the future.

Thus, unless you think the next 75 years are going to be even more dramatic than the last two decades, this is a reasonable estimate, based on 5,000 simulations, of what investors buying just these nine REITs can expect.

Retirees will be interested to know that most likely such a REIT portfolio could safely withdraw 6.6% in perpetuity without significant risk of ever running out of money.

For context, Morningstar estimates that a safe withdrawal rate for the standard 60/40 stock/bond portfolio is now 3.3%.

In other words, reasonably priced REITs can be a great way to significantly increase your income in retirement.

For example, while it's not advisable, let's say you started with $100,000 and only invested into these nine REITs.

Now assume you withdraw 6.6% annually. What kind of income could that generate?

After starting out withdrawing 2X the safe withdrawal amount of a 60/40, there is a very good chance that you'd be able to live off generous, stable, and inflation-adjusting income for the next 75 years.

There is even a 50% chance that your income would rise steadily, as much as 8X over the decades.

I understand why so many investors, especially retirees are worried about inflation. It's been 31 years since we've seen inflation this high and economists believe that inflation will get worse before it gets better. 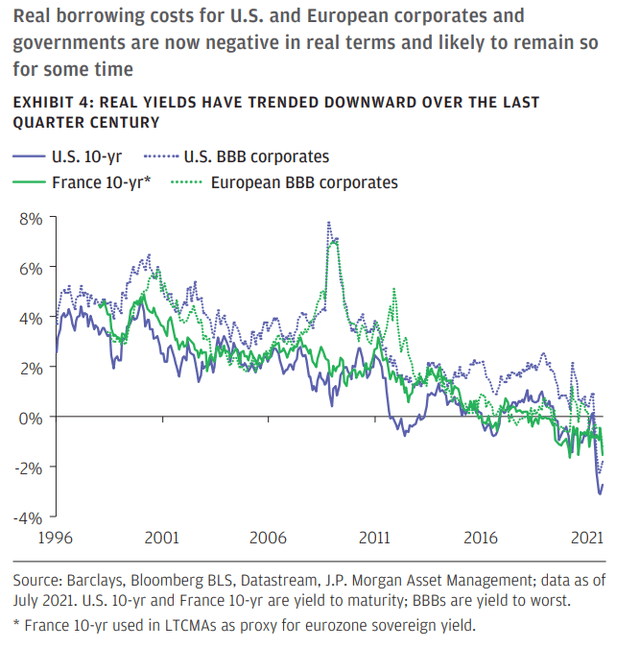 And with inflation-adjusted bond yields expected to remain negative for years if not decades, the traditional 60/40 retirement portfolio likely needs adjusting.

Stocks returns for the next decade could prove painfully low, and bonds are likely to deliver negative real returns. 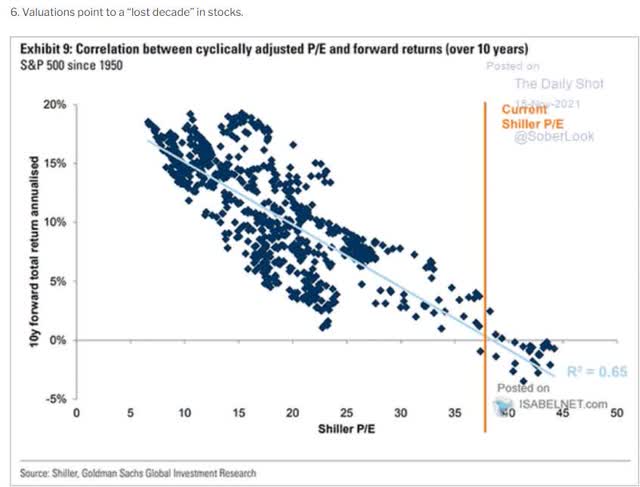 Fortunately, it's always a market of stocks, not a stock market. Today REITs, despite a massive 38% rally in the last year that crushed sky-high inflation (and the S&P), still offer reasonable options for income investors.

These nine reasonably priced REITs offer a very generous 5.2% yield that analysts expect to grow at a solidly long-term inflation-beating 5.0% over time.

And that might be just what you need to not just beat inflation today, but retire rich tomorrow, and stay rich in the coming years and decades. 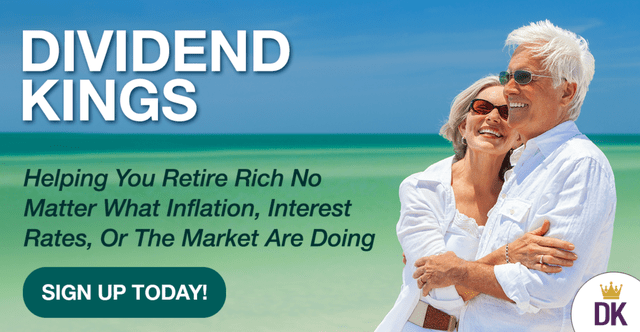 Disclosure: I/we have a beneficial long position in the shares of BXP, VICI, KRC either through stock ownership, options, or other derivatives. I wrote this article myself, and it expresses my own opinions. I am not receiving compensation for it (other than from Seeking Alpha). I have no business relationship with any company whose stock is mentioned in this article.