It's been a rough few months for the restaurant industry, with several stocks giving up their H1 gains due to persistent staffing issues, and the realization that inflation is worse than many feared. Shake Shack (NYSE:SHAK) has not been immune from the selling pressure, now down 7% year-to-date vs. a more than 20% return for the S&P 500 (SPY). This is likely partially attributed to valuation because though SHAK saw improved sales performance in Q3; the stock continues to trade at lofty levels relative to its peers. With significant unit growth planned in 2022, SHAK remains one of the best growth stories sector-wide, but at ~150x FY2023 earnings estimates, I don't see enough margin of safety at current levels.

Shake Shack released its Q3 results earlier this month, reporting record quarterly revenue of $193.9 million and system-wide sales of $298.6 million, up 49% and 53%, respectively. This solid performance was driven by increased traffic, especially at urban locations, with urban same-shack sales improving from -23% on a two-year basis in Q2 2021 to -11% in September. Meanwhile, suburban shacks continue to perform extremely well, up 7% relative to October 2019 levels in October 2021, pulling total same-shack sales up to just -1% on a two-year basis. The company also saw a great reception to its premium Black Truffle Burger unveiled subsequent to quarter-end. Let's take a closer look at the quarter below:

As shown in the chart above, SHAK's same-shack sales continue to trend in the right direction, with total same-shack sales improving from -12% in Q2 2021 to -7.3% in Q3 2021. This was driven by increased traffic offset by product mix, with both urban and suburban locations seeing a sharp recovery in sales. The recovery has continued into Q4, with same-shack sales up 7% on a two-year basis in suburban areas, and down just 1% relative to 2019 in urban locations. Given that we continue to a significant number of employees working from home and reduced levels of tourist activity, the significant rebound is encouraging, helped by a recovery in NYC, Los Angeles, Chicago, and Boston. This improvement is likely to continue as more employees return to offices, with a solid recovery for tourism likely in 2022 as some travelers become comfier visiting more traffic-dense locations. 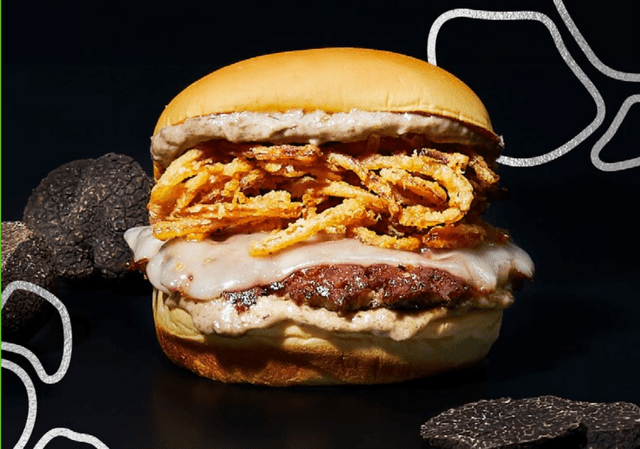 Shake Shack recently unveiled its Black Truffle Burger and Parmesan Black Truffle Fries, which were initially launched as an App-only option to improve digital engagement and acquire new purchases. The Black Truffle Burger (loaded with black truffle oil, crispy shallots, and Gruyere cheese) comes in at a premium price tag of $8.99 at most shacks in urban markets. Given the strong reception, this could provide an opportunity to drive a higher average check with premium limited-time offers in future quarters. Notably, even ahead of the launch, digital sales retention held at 80% in September vs. the peak in January 2021, when we began to see a resurgence of in-store dining. This is quite impressive. With higher average check and frequency for guests in the company's digital ecosystem, the growth in this category is very encouraging (3.2 million total purchases acquired since March 2020).

Moving over to unit growth, Shake Shack had another decent quarter, opening five new company-owned shacks, pushing its company-owned store count to 205 at the end of Q3. The company expects a much busier Q4, with 10-13 new openings. Assuming 11 new openings to be conservative, Shake Shack would finish the year with 216 company-owned restaurants, translating to an impressive 18% unit growth rate in FY2021, especially when factoring in COVID-19 related development headwinds. The company also had a solid year thus far among its licensed business, with 221 licensed shacks opened year-to-date, with plans to open 25 for the year.

If we look ahead to FY2022, development plans are ambitious, intending to add 45 to 50 shacks, an acceleration in growth from FY2021 levels (47 at mid-point vs. up to 35 in 2021). The plan is for 25% of the 2022 class to have Shack Track drive-up or walk-up windows and ten drive-thru formats. Notably, Shake Shack plans to open its first drive-thru in December. The one negative development is that costs are projected to rise sharply for new buildouts, with the company guiding for a 10-15% increase in the 2022 class when incorporating the higher costs for drive-thru plans.

Finally, on staffing and inflationary pressures, Shake Shack has not been immune from the industry-wide headwinds. During the quarter, Shake Shack noted that it's seeing small disruptions from staffing and that inflationary pressures are weighing on margins, with beef up 30% year-over-year in Q3 and up nearly 10% sequentially. This led to food and paper costs increasing 110 basis points to 31.1%. Meanwhile, the company's labor costs were impacted by paying higher wages ($15.00 per hour average for starting team members). This led to a sharp increase in labor costs as a percentage of sales (31.1% vs. 30.0%).

This is the right move if Shake Shack wants to increase retention and de-risk its growth plans by ensuring the staff is in place to run its restaurants and retention levels remain high. However, it did take a bite out of SHAK's margins. Q3 operating margins came in at 15.8% and are expected to slide to 14% to 16% in Q4 2021. This would represent flat margins at the high-end relative to Q4 2020 despite the sales leverage and a meaningful step down from Q4 2019 levels of 20.4% (FY2019: 22.3%).

It's important to note that Shake Shack should be able to mitigate this by hiking prices, and it's only taken a 3.0% to 3.5% increase thus far, which is well below the industry average. However, Shake Shack chose to remain conservative with pricing for now. This is because the 3.0% to 3.5% is already well above its typical 1.0% - 2.0% menu price increase. Besides, with Shake Shack being a premium brand, I would argue it has meaningful pricing power. Let's take a look at the financial results below: 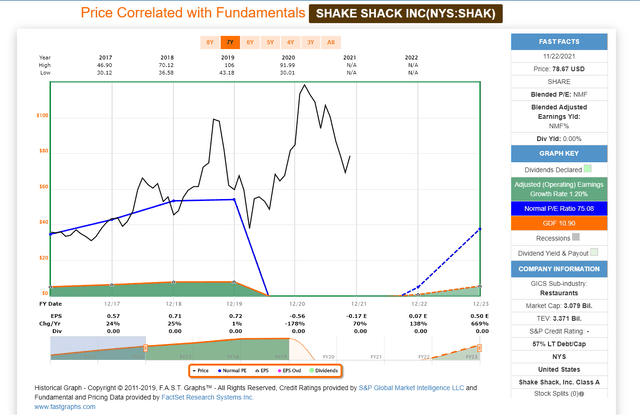 Looking at the chart above, we can see that Shake Shack has historically traded at 75x earnings. Even assuming a premium earnings multiple of 90x earnings to account for its exceptional growth rates, this translates to a fair value of $49.50 - $54.00 based on FY2023 annual EPS estimates of $0.55 - $0.60. This suggests that there's still considerable downside from a valuation standpoint if inflationary pressures worsen. In a more bullish scenario, it's still hard to argue that there's any meaningful margin of safety here. In summary, while this is an exceptional brand with an enviable growth profile, I would argue it's priced for perfection even after its sharp decline. 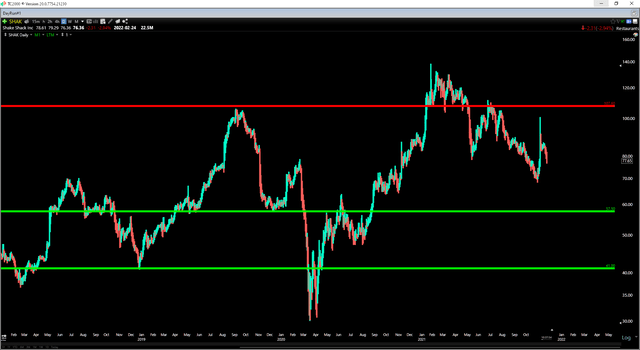 Moving over to the technical picture, we can see that the next strong support level for the stock doesn't come in until $57.50, where the stock found strong support on pullbacks during Q2 2019 and Q4 2019 pre-COVID-19. Meanwhile, the stock has a brick wall of resistance at $107.60. With SHAK in the middle of this trading range, the reward/risk has improved from Q2 2021 levels when the stock was hugging resistance, but it still isn't great, with SHAK more than 25% above its next strong support level. Based on no meaningful margin of safety from a valuation standpoint and the stock trading well above its next support zone, I believe investors should be patient before jumping into the stock.

Shake Shack posted a much better Q3 performance, and there's a lot to like about the story long-term, with digital retention high, aggressive unit growth, and suburban locations trending well above 2019 levels in October from a comp sales basis. However, there's no investing without valuation, and at more than 100x FY2023 earnings estimates, I don't see any way to justify buying the stock here near $78.00 per share. Therefore, I believe there are much better opportunities elsewhere in the market currently. One of my favorite ideas continues to be Agnico Eagle Mines (AEM), trading at less than 16x FY2023 earnings estimates with 40% plus margins.

Taylor Dart
25.11K Followers
"A bull market is when you check your stocks every day to see how much they went up. A bear market is when you don't bother to look anymore."- John Hammerslough - Disclosure: I am not a financial advisor. All articles are my opinion - they are not suggestions to buy or sell any securities. Perform your own due diligence and consult a financial professional before trading or investing.
Follow

Disclosure: I/we have a beneficial long position in the shares of AEM either through stock ownership, options, or other derivatives. I wrote this article myself, and it expresses my own opinions. I am not receiving compensation for it (other than from Seeking Alpha). I have no business relationship with any company whose stock is mentioned in this article.