Empowered by its holdings, QTUM has appreciated by 46.43% before reaching its current share price of $55.32. This performance remains below the iShares PHLX Semiconductor Sector Index ETF (SOXX), but things could change with current market fluctuation impacting mostly tech stocks.

Furthermore, an investment in the Defiance ETF makes sense in view of the increasing number of investors being attracted to the space and the amount of money being poured in.

Investors are highly attracted to QC as seen by the number of venture capital funds flocking to support start-ups that want to "revolutionize" traditional computing with new processors, software, or quantum sensors. According to PitchBook, 34 deals had raised more than $1019 million in the first eight months of 2021. That is nearly 50% more than in 2020 and superior to the combined amount for the 2015-2019 period.

However, it has been a different story for the number of deals, which, after rising to 51 in 2020, has descended to just 34 in 2021, but with four months left. Still, when considering some of the deals listed in PitchBook, it is evident that their sizes (deal amounts) are going up, from $79 million for Rigetti in 2020 to above $100 million for Xanadu and $450 million for PsiQuantum, both in 2021. Exploring the Rigetti deal further, the company which makes quantum hardware, announced a $1.5 billion merger with Supernova Partners Acquisition Company II (SNII). Now, for those who want to take full advantage of the potential offered by the dynamic quantum computing ecosystem, without necessarily having to embark on the SPAC route, there is an easier and more convenient way in the form of QTUM.

For this purpose, according to Money For The Rest Of Us, "SPAC investing has been less profitable for individual investors. Most SPACs underperform the stock market and eventually fall below the IPO price". These statements further reinforce the rationale to invest through an ETF, even if this means a more indirect investment in QC.

According to Defiance, holdings must have a free-float-adjusted market capitalization of at least $150 million and a six-month average daily value traded of at least $250,000. Other criteria include a free-float percentage greater than 10%, and an average bid-ask spread of less than 1%.

Exploring further, the ETF tracked 70 globally-listed stocks as of November 23 spanning across all market capitalizations, using the BlueStar Quantum Computing and Machine Learning Index. Also, index components are assigned an equal weight. As a result, the components of the fund are restricted to a maximum of 2.81% for the first holding which is Analog Devices (NASDAQ:ADI) while it is 0.80% for Alibaba Holdings (BABA), which completes the list of constituents. The index has to be reviewed semi-annually with the weights reset accordingly. This is different from a market-cap-weighted index where individual constituents can grow in terms of percentage of net assets without needing to be constantly rebalanced. It is for this "rebalancing" work that the issuers charge an expense ratio of 0.40%. 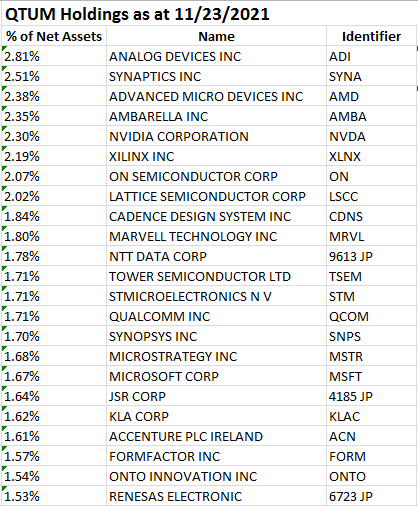 A rapid glance at QTUM's holdings, with big names like Advanced Micro Devices (NASDAQ:AMD), Nvidia (NASDAQ:NVDA), and Qualcomm (NASDAQ:QCOM) may lead us to think that it is just another semiconductor industry ETF like SOXX. However, on looking deeper, one comes across IT services plays like International Business Machines (IBM). The reason for its involvement in the Defiance ETF is that the company is working towards Quantum advantage, or the tipping point where "quantum applications deliver significant advantages over classical computers". Now, IBM constitutes a tiny 0.97% of QTUM's assets, but there are also Alphabet, Google's (NASDAQ:GOOG) parent company, Hewlett Packard (HPE), Microsoft (NASDAQ:MSFT), all involved in Quantum Computing. This "involvement" does not mean selling QC products or solutions but is currently restricted to research programs. This brings us to the need for realism.

The need for realism

With the field holding so many promises, financial institutions are also at the exploratory stage, in the search of how QC can increase investment yields, while in the aerospace field, Airbus (OTCPK:EADSY) and Lockheed Martin (LMT) are probing application development in communications and ML algorithms respectively.

To be realistic, while there is a lot of potential applications and investors' expectations, there is still a lot of research lying ahead. Consequently, commercializing quantum science which is at the development stage, will take time for industry and governments. At the same time, declining "traditional" computing costs as well as smartphones getting "smarter" as a result of being equipped with the latest AI chips will continue to put pressure on QC to deliver some sort of "breakthrough application" in order to compete with the increasingly sophisticated devices of today.

Still, despite the uncertainty surrounding QC, QTUM makes for a viable investment, as it encapsulates stocks that already have profitable core businesses and are merely diversified into QC. This is also better than investing in pure-play startups.

The ETF, due to the sheer number of semiconductor ("chips") stocks it contains, has delivered upbeat performance but is still below SOXX's. Conversely, the latter's 24-months beta, which measures volatility has been much higher, at 1.29. Here, a value of 1 indicates the volatility offered by the broader market characterized by the S&P 500. 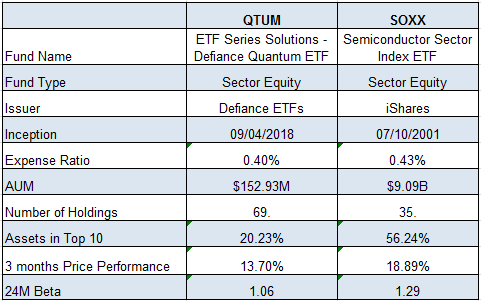 QTUM, due to its predominant exposure to the semiconductor industry also constitutes an alternative for SOXX aimed at those who want exposure to related industry verticals, for example, IT plays making use of chips as raw materials. Additionally, the "add-on" constituted by QC could see the Defiance ETF outperform its peer in case there is some "breakthrough" in 2022 with so much investment flowing in.

It also provides better protection against tumultuous times with its higher number of holdings at 69 compared to just 35 for SOXX. At the same time, QTUM includes a lower percentage of assets in the top 10, at only 20.23% compared to SOXX's above 52%. Therefore, the Defiance ETF bears fewer concentration risks than its iShares peer.

I would recommend QTUM for anyone who wants to gain part exposure to the latest opportunities offered by QC while avoiding some of the hypes associated with this promising field of science. Far from the somewhat speculatory nature of SPACs, the mature companies in QTUM's portfolio, with their long-time domain knowledge also have the cash to acquire startups at reasonable valuations. This is in addition to incrementing their own organic R&D.

Pursuing further, a subsector breakdown reveals that, in addition to just QC, QTUM's stocks make significant use of ML and AI capabilities which are two concrete fields of science that have already reached the commercialization stage to generate money.

Finally, due to interest rates rising fears, and bond yields going up, the ETF which consists primarily of growth stocks has seen a volatile share price trajectory, and momentum indicators point towards a possible dip to the $54-level, but, in the medium term, the ETF could again flirt with its mid-November high of $56.9. This said, due to its wide geographical footprint, with the increasing need for chips in 5G communication gear and electric vehicles, QTUM is a buy-and-hold for years to come.

Chetan Woodun
5.91K Followers
My aim is to provide differentiated insights, whether it is for investing, trading, or informational reasons. For this purpose, I am not a classical equity researcher or fund manager, but, I come from the IT world as the founder of Keylogin Information and Technologies Co. Ltd. Thus, my research is often backed by analytics and I make frequent use of charts to support my position.I also invest, and thus, in this tumultuous market, I often look for strategies to preserve capital. As per my career history below, I have wide experience, initially as an implementer in virtualization and cloud, and I was subsequently a team leader and project lead, mostly working in telcos.I have also been a mediocre entrepreneur in real estate, and a farmer, and like to dedicate at least 5 hours per week to working on a non-profit basis. For this purpose, I regularly contribute peer reviews and opinions for enterprise tech and help needy families by providing sponsored work.As for Research, I started with Tech stocks before going Multi-Tech with Fintechs, Biotechs, and Cryptotechs.I have been investing for the last 25 years, initially in mutual funds where the "learned economists" would always advise you to "think long term". Got a lot of experience in the 2008/2009 downturn when I lost a lot. Since then I do my own research and have fallen in love with Seeking Alpha because of the unique perspectives it provides to someone investing hard-earned money as well as access to some of the best financial advisors.We live only once but can have many "investment lives" especially when investing in individual stocks.

Disclosure: I/we have a beneficial long position in the shares of SOXX either through stock ownership, options, or other derivatives. I wrote this article myself, and it expresses my own opinions. I am not receiving compensation for it (other than from Seeking Alpha). I have no business relationship with any company whose stock is mentioned in this article.

Additional disclosure: This is an investment thesis and is intended for informational purposes. Investors are kindly requested to do additional research before investing. I/We may initiate a beneficial long-term position in QTUM within the next 72 hours.This article has been edited with the help of Bhoshan Woodun