Nearly 20 months ago, we issued the first BUY alert for ICL Group Ltd (NYSE:ICL) when the stock touched $4.00.

Two months later, the stock had already lost 1/3 of its value.

We bought more. Much more than we did in January 2020.

Three weeks ago, we let everything go when the stock touched $9.

True, it does look as if we have left too early, with the stock jumping 6.5% two weeks after we sold.

Nonetheless, it doesn't change the fact that ICL has been a very fertile investment for us on Wheel of FORTUNE ("WoF).

Moreover, as soon we let ICL go, we also let The Mosaic Co (NYSE:MOS) in. In other words, we've traded ICL for MOS.

In this article we explain why.

Here's the peer group of ICL and MOS (per SA "Fertilizers and Agricultural Chemicals" industry):

What we're doing here is collecting data for all names (but the last*), using all sorts of financial metrics.

*MBII has a small market-cap (only $130M) it's the only company among this group which isn't profitable, and it also has a SA Warning ("MBII is at high risk of performing badly") attached to it. AGFS has an even smaller market-cap ($100M) and it's also not profitable, however it doesn't include that warning, and so we do include it in the presented data and ranking (hereinafter).

Once we collect the entire data, we can quite easily point at the best names among this group.

This is different from SA Quant and at the end of this article we will compare our rating, SA Quant, and Wall Street.

Interestingly, even at this point and before we get to the picture, SA quant and Wall Street are from agreeing, especially when it comes to the two stocks this article focuses on.

Based on SA Quant ranking, ICL is 1st and MOS is 3rd.

Based on Wall Street ranking, ICL is 12th and MOS is 9th.

Quite a divergence between these two gauges.

If we arrange the data based on the combined ranking of these two sources, with the top-ranked stock getting 1 and the worst-tanked getting 13, we get the following ranking:

The encouraging news is that both MOS and ICL make it into the "top third" (38.5% to be precise), and that MOS is ranked one spot above ICL.

Looking at the total return of the group since March 23, 2020 shows that the top-5 were IPI, SQM, MOS, BIOX and ICL. These stocks are currently ranked 9th, 12th, 4th, 2nd, and 5th, respectively, based on the above "combined ranking" scoreboard. 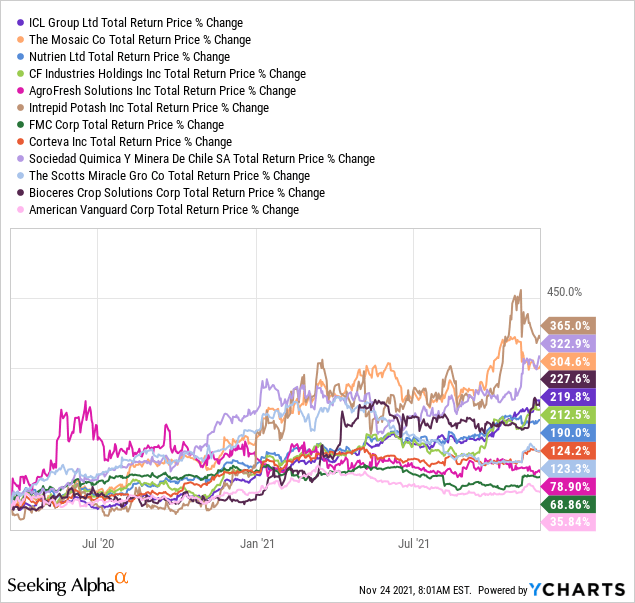 Below you can find the raw data that we use in order to determine our rating ("Quant", if you like). 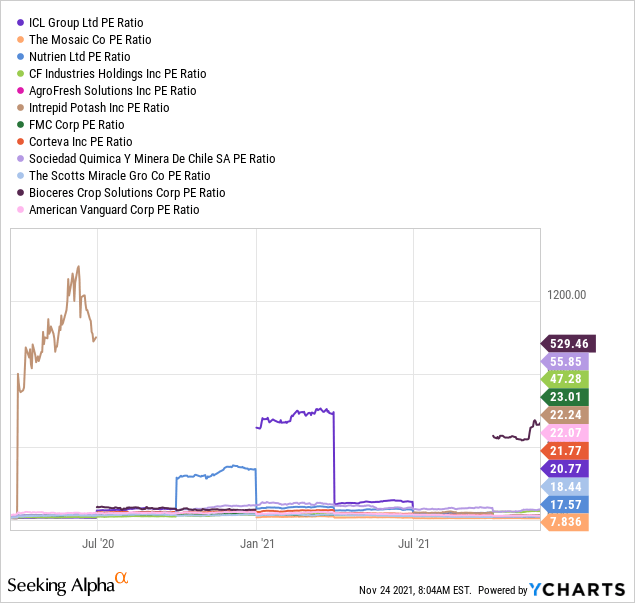 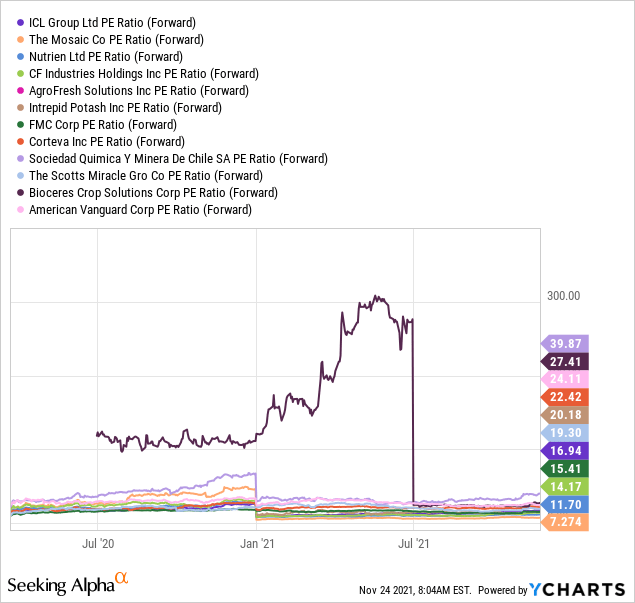 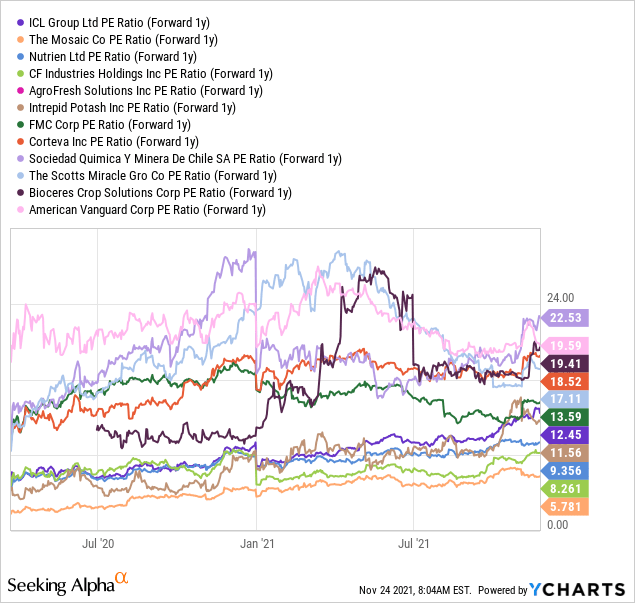 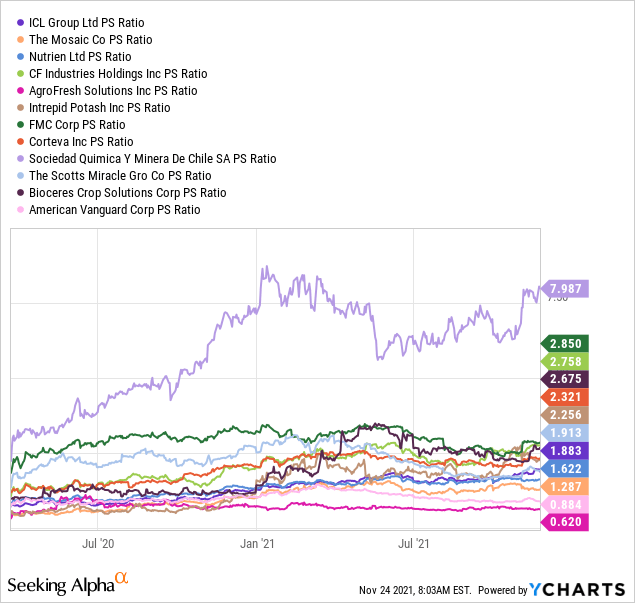 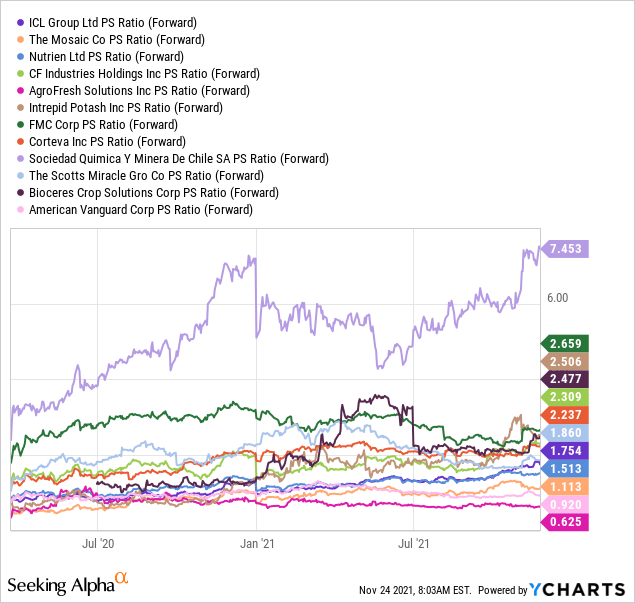 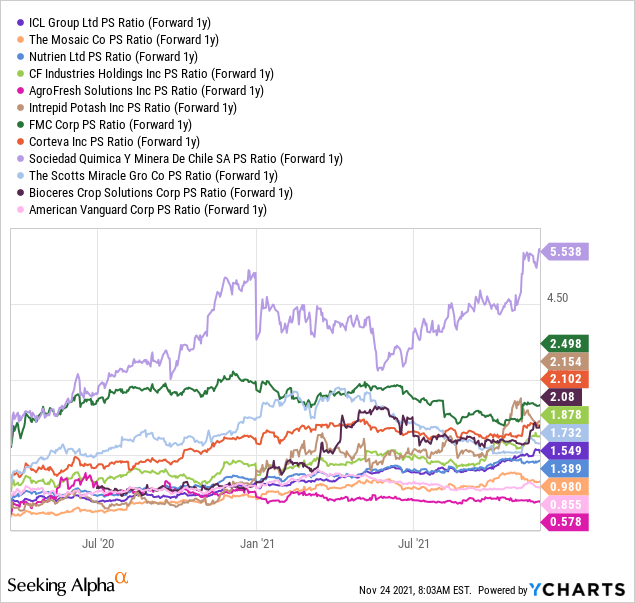 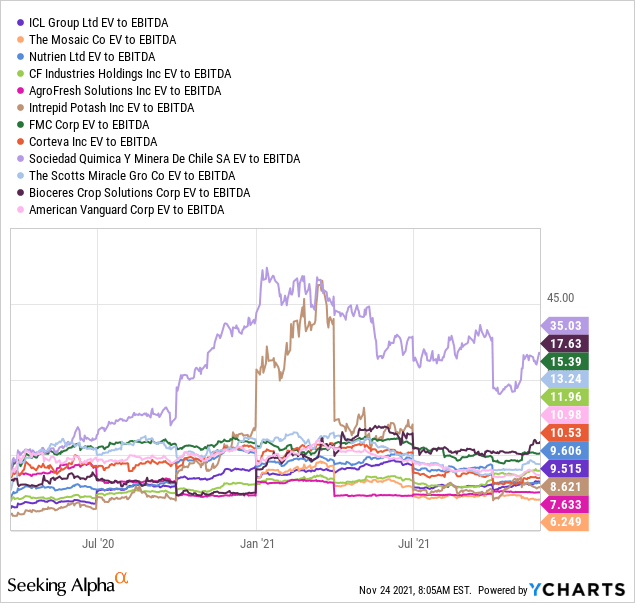 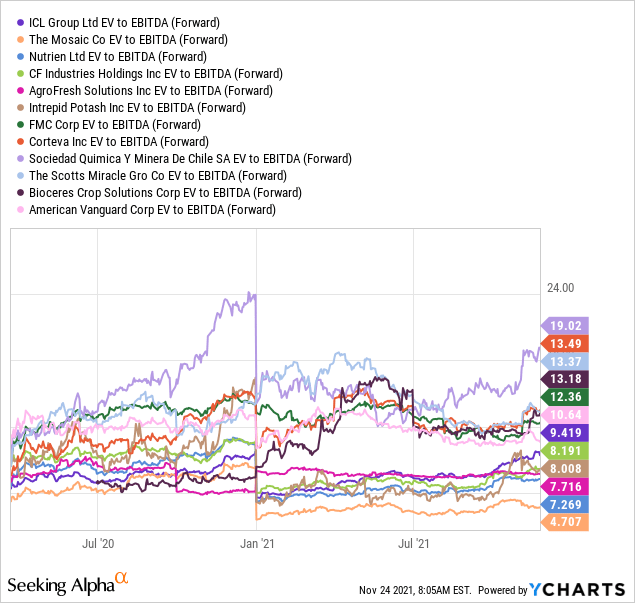 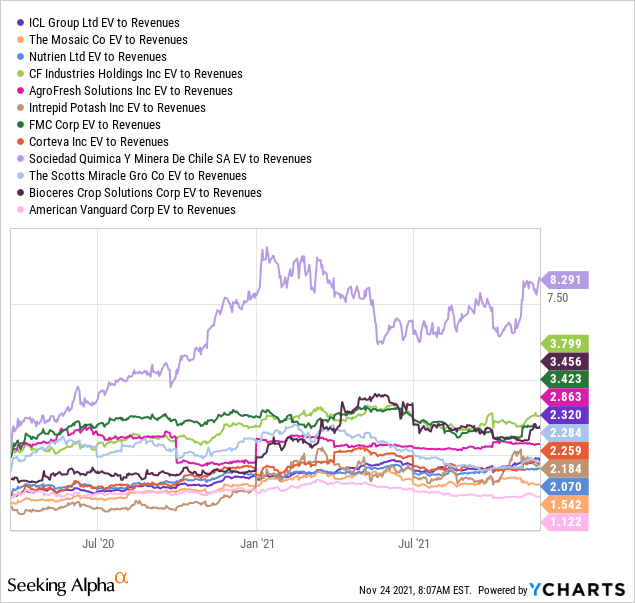 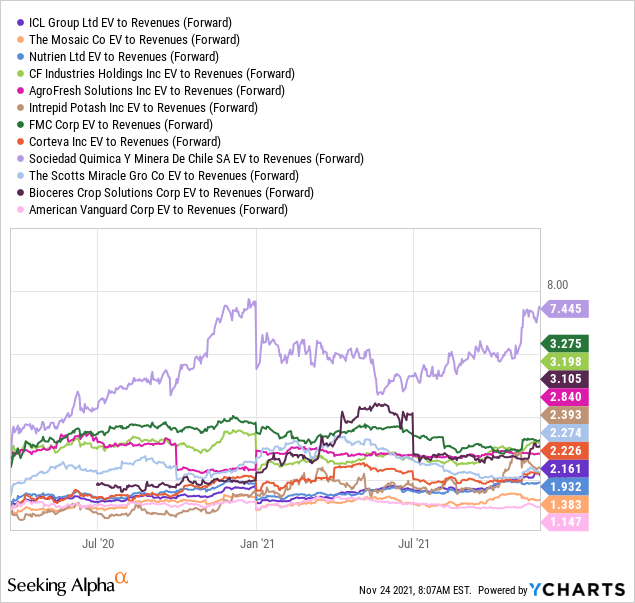 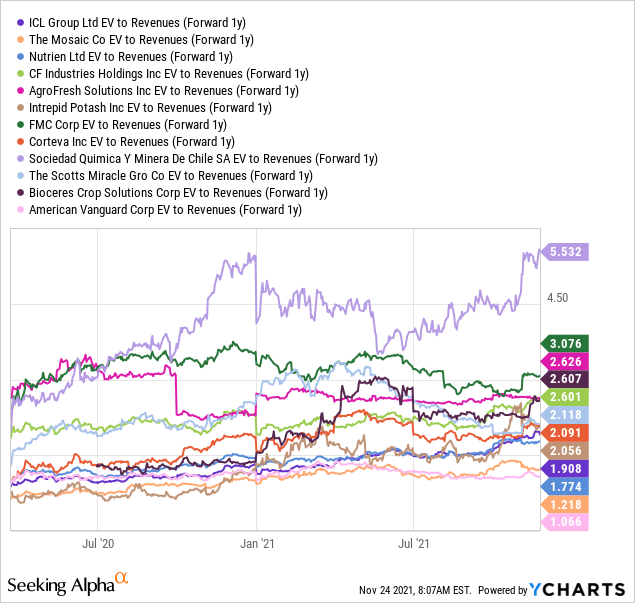 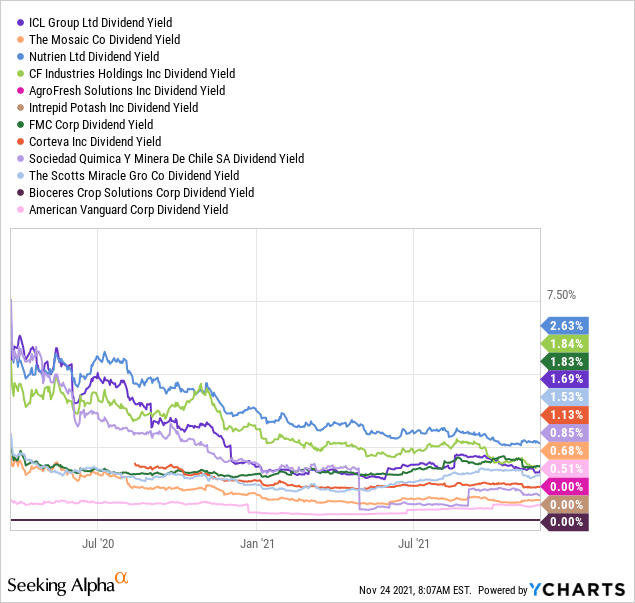 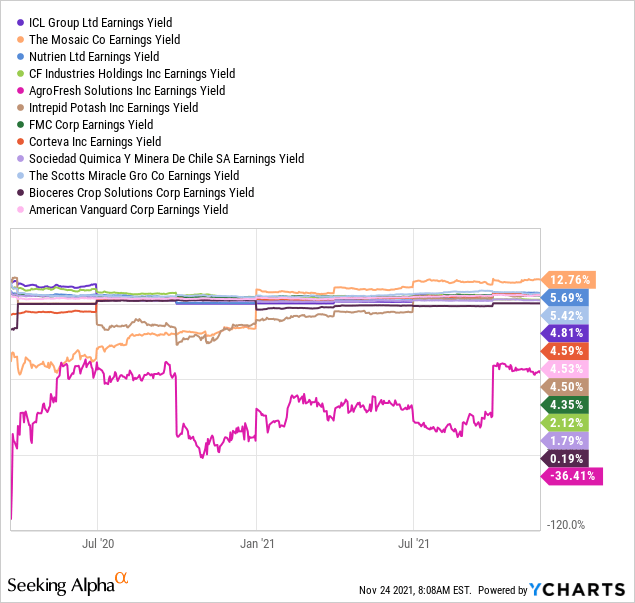 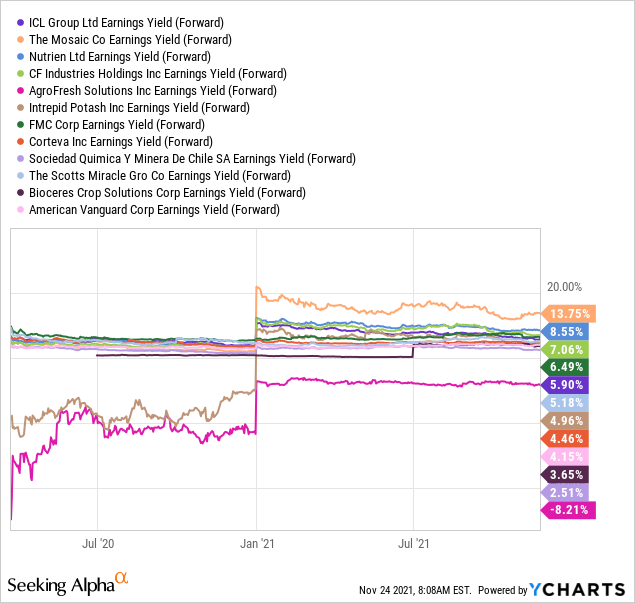 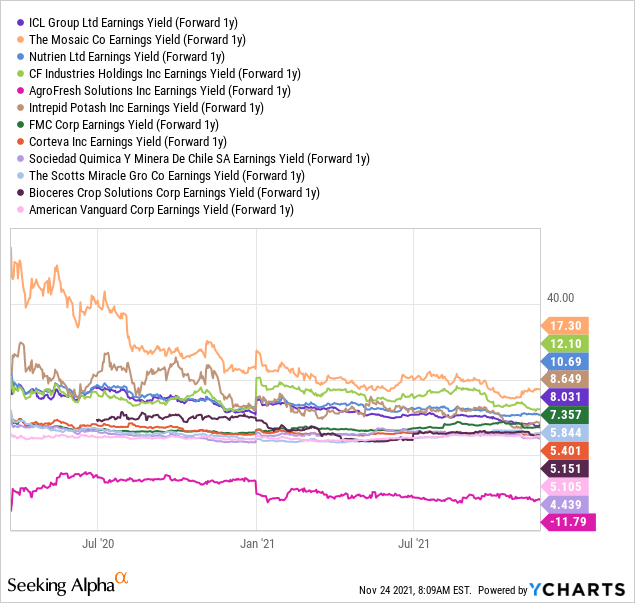 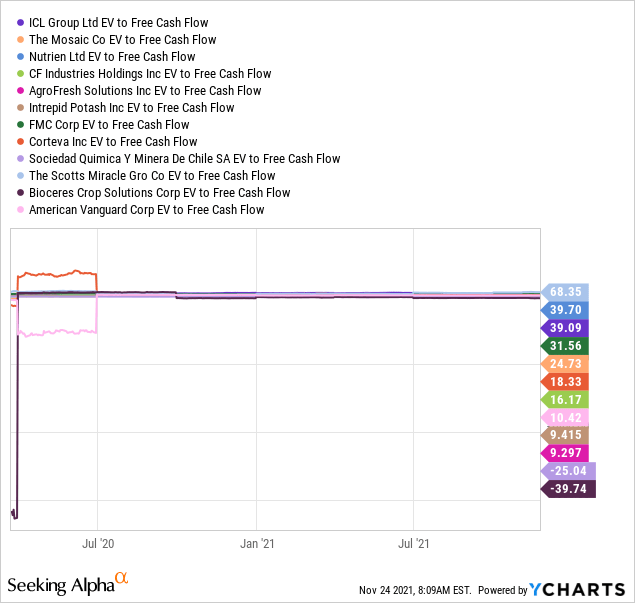 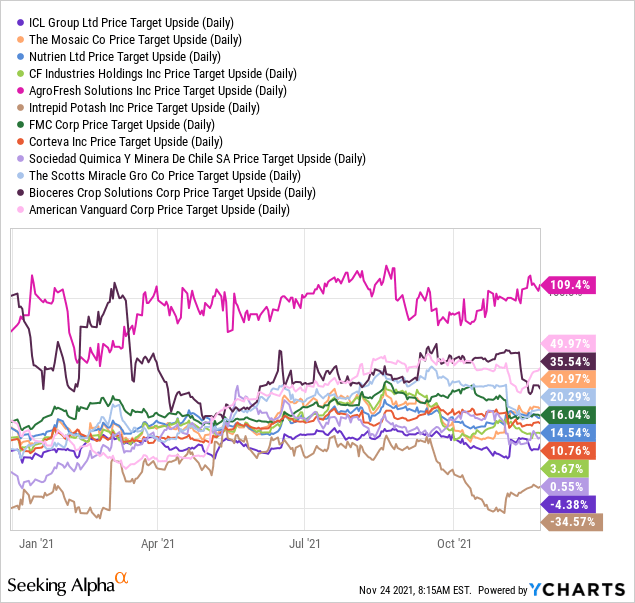 If we sum up all the above rankings, i.e. the ranking for every stock along each category, we end up with the total number of points ("TP") for each name.

Obviously, the lower - the better.

Based on this here's the final ranking ("FR") for this industry based on this "quant" methodology of ours:

Remember that up above we've shown how the combined Quant and Wall St. ranking looks like? We also promised that we would get back to it, so here goes.

Here are all the rankings, including ours, in one table:

With the exception of BIOX, you can clearly see that our ranking is quite in line with the Q+WS ranking.

Back to MOS & ICL

The final ranking sees MOS ranked 2nd and ICL ranked 3rd, so the two are very close based on methodology we've used above.

However, if you look at the total number of points you see that the gap (13 points) is quite wide, suggesting that MOS is clearly a better pick right now.

Using the same financial metrics as above, we've arranged the data differently, so you can easily see why we claim this and how we back that statement. 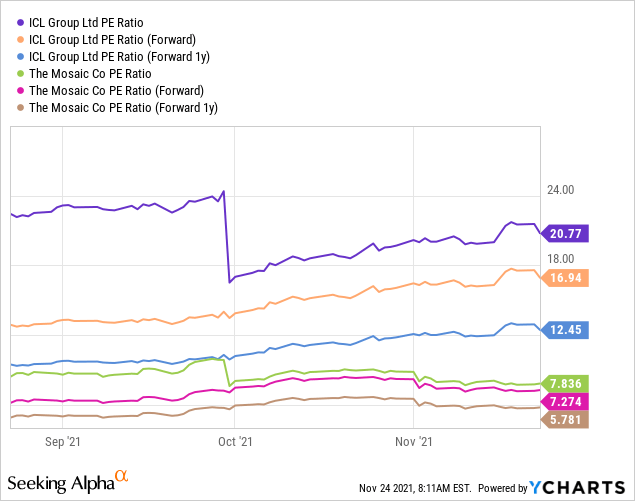 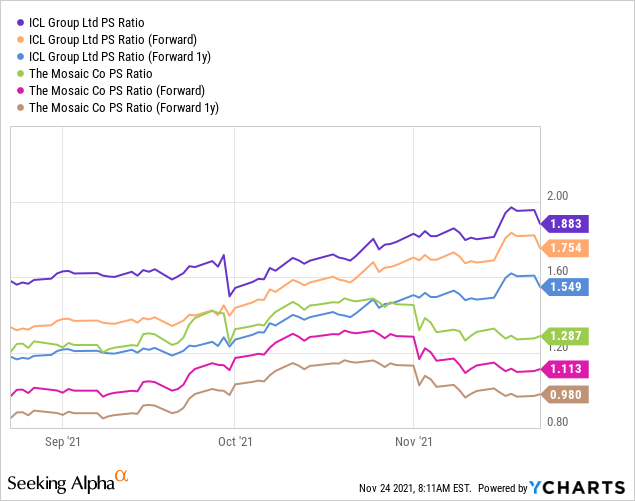 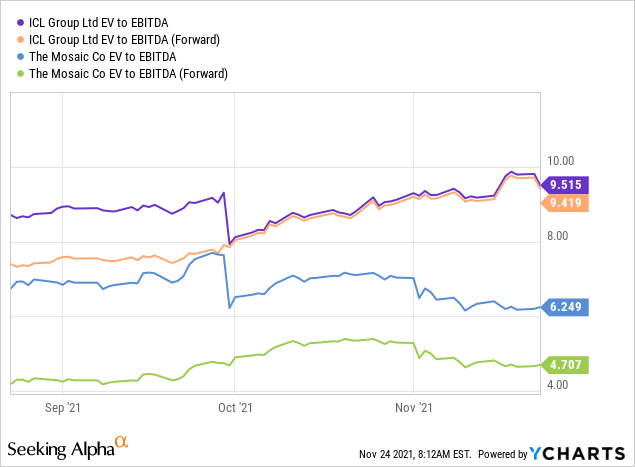 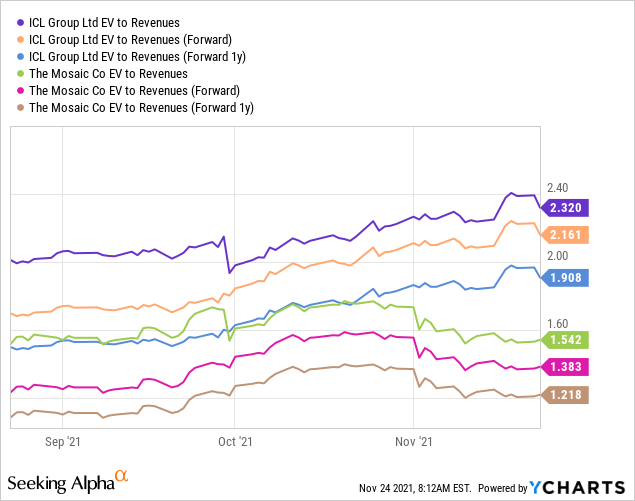 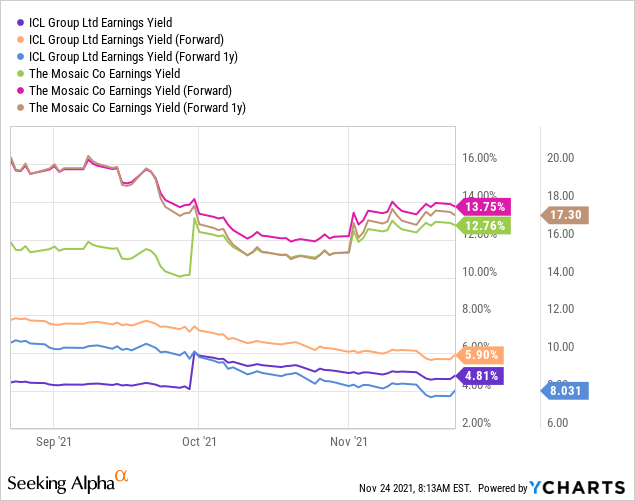 Price Target Upside (Daily): A picture worth a thousand words. 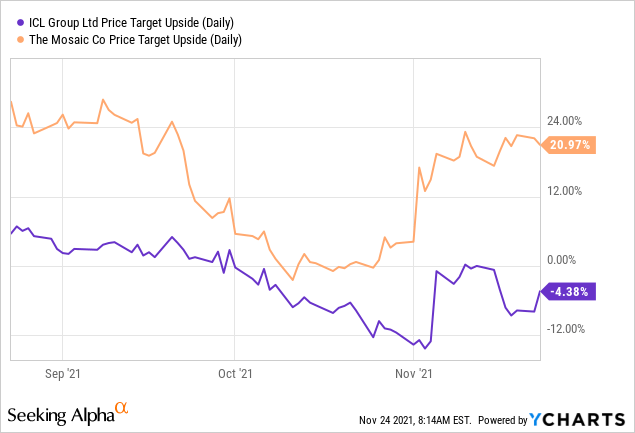 Two charts for each stock that emphasize the lead of MOS over ICL.

2) It was very positive when the stock broke the green, down-trending, channel last year. A clear bullish sign that is still very much in play.

Nonetheless, ICL is now entering what we believe to be a strong resistance zone. We're not saying that the stock can't cross this zone safely, but we do think it's a hell of a barrier. 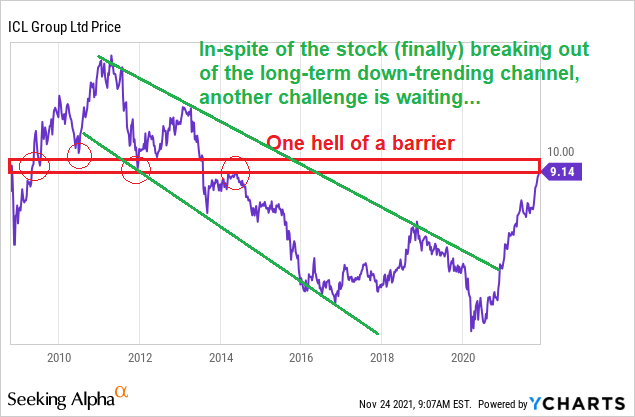 1) Unlike ICL that broke the down-trending channel last year, MOS has finally breached a decade-long resistance line earlier this year.

Putting it differently, MOS might have more (technical) fuel in the tank to keep this break-up going. 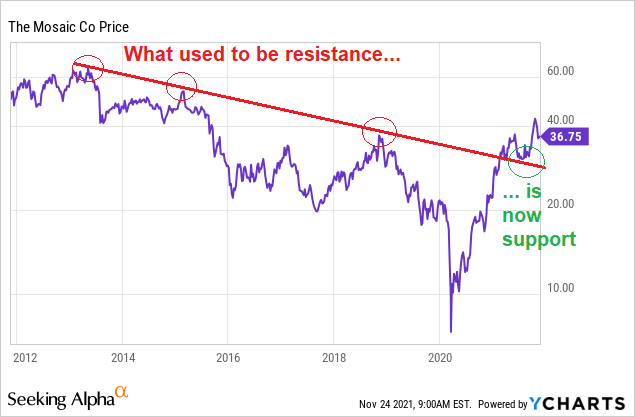 2) This below chart is simply showing you that the 200-DMA is apparently functioning as a support level over recent months.

If so, the downside risk of MOS is only about 8% from here. 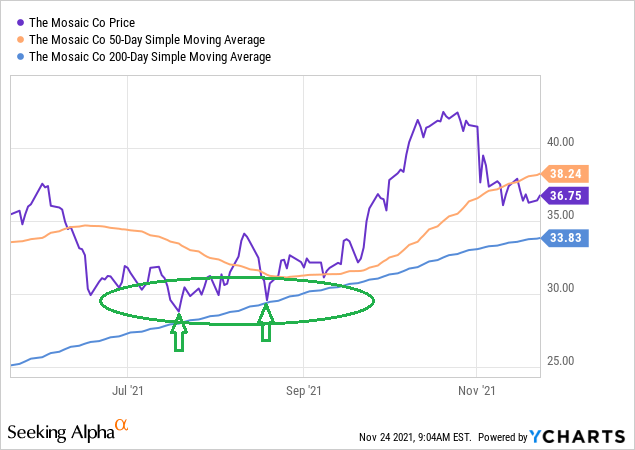 Having that (8% downside risk) in mind, it's easier to understand how we trade MOS recently.

Our MOS (and NTR) Playbook/Tradebook

Unlike ICL, we haven't yet bought MOS straight.

Instead, we're allowing the stock in using options.

Why do we use relatively long-duration expiry dates? Because you 'hit the iron' when it's hot, and in this case volatility is playing the role of the iron.

The implied volatility of MOS was fairly high in early November. The higher the volatility - the more sense it makes to sell longer-durations.

Have no doubt: We don't rule out buying MOS straight, and/or selling PUTs with higher strikes, soon.

With the fast and furious way that food and fertilizer prices are performing over the past 18 months, there's no reason to believe that the relevant stocks won't keep marching higher. 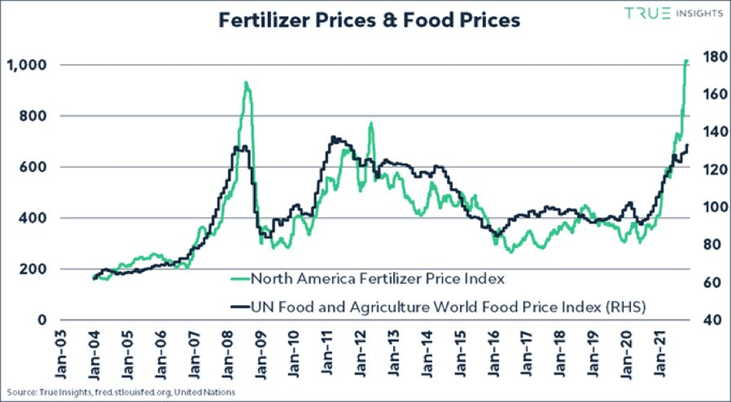 The only reason to be cautious here is actually Jay Powell.

As we explained earlier this week, Powell's second-term is likely to see him fighting against inflation more than he fought in favor of growth during his first term.

If that is the case, even a "Fertilizer Frenzy" may bump into a "Monetary Crazy"... 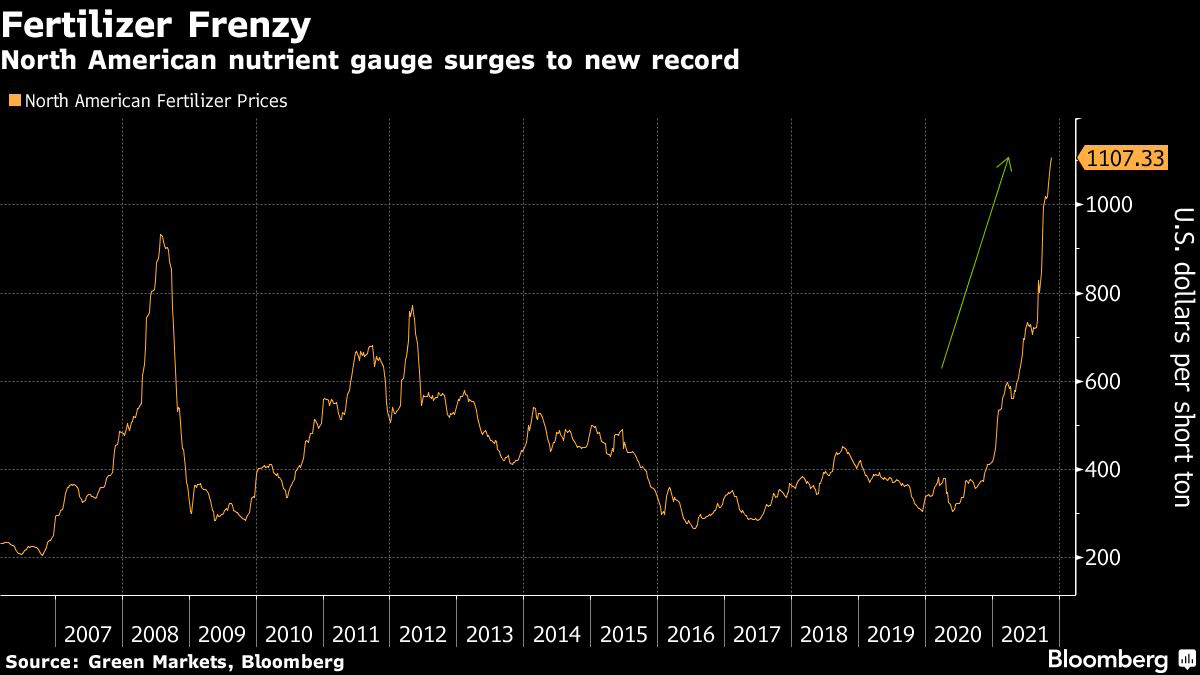 Last but not least, you may want to ask how come we don't own NTR, the top-ranked of both Q+SW as well as our rankings?

Truth is, we lost the stock a couple of months back as covered CALLs that we sold (apparently too early and too low) were assigned on June 18th, seeing us selling the stock for a net price (strike + premium) of $54.40.

Since then, the stock hasn't stopped its run-up, and even when we thought that it's about to pull back in Q3 - that hope was short-lived.

We still very much wish to get back into NTR, but for the time being we are happy with our MOS and FMC that may have a greater upside potential.

At the end of the day, no matter which ranking one uses, that ranking is predominantly pointing to quality.

And while quality is a major/top factor, it's not the only factor. As a matter of fact, Mr. Market quite often lifts or sinks a stock regardless of quality and mostly (or even solely) based on other, sometimes unknown, "fertilizers".

NTR is the top-quality name within this industry, but if you scroll all the way up to the chart showing the total returns (since March 23, 2020) you'll find that NTR is only the 7th performer among the group that consist all 13 names that we started with.

Point is, quality is very important but it's no guarantee for outperformance.

Be one of the next 40 subscribers to join the service using a $500 OFF coupon (valid for yearly fee only until quota gets filled):

Take Advantage of this Deal to Join the Wheel

Disclosure: I/we have a beneficial long position in the shares of MOS, FMC either through stock ownership, options, or other derivatives. I wrote this article myself, and it expresses my own opinions. I am not receiving compensation for it (other than from Seeking Alpha). I have no business relationship with any company whose stock is mentioned in this article.