Microsoft Corporation (NASDAQ:MSFT) is the largest software company in the world. They have successfully transitioned to a cloud-based service model in recent years. The main revenue drivers are server products and cloud services, which include Azure, and office products and cloud services, which include Office 365 and Microsoft Teams. The company also receives significant revenue from Windows, Gaming, LinkedIn, and other areas. Below I will discuss the current and future growth drivers and the path to a $400 per share price.

Microsoft has been on an absolute tear for several years now. Even the March 2020 COVID-19 market crash is but a small blip on the three-year chart. The stock currently trades near $335 per share, near all-time highs.

Shown below, the share price gains have outpaced impressive gains in revenue, EBITDA, and earnings per share.

At the same time, margins are the highest they have been in two decades on the back of growth nearly across the board. As shown below, some of the highest growth is in the highly profitable server products and cloud services segment. This segment includes Microsoft Azure.

Even better, as shown below, for the three months ended September 30, 2021, growth in this area appears to be accelerating. Server products and cloud services revenue was up a whopping 35% over Q3 FY21. It was up 27% in fiscal 2021 over fiscal 2020. 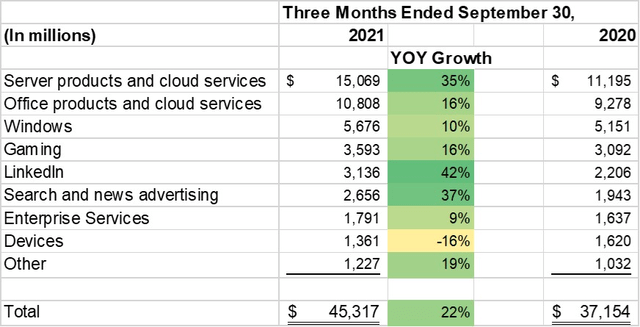 Total revenue also accelerated from growth of 18% in fiscal 2021 over fiscal 2020 to 22% in Q1 of fiscal 2022 over the same period in fiscal 2021. This is incredibly positive for long-term investors. As mentioned previously, Microsoft has been stellar on margins. Already strong margins have surpassed most expectations.

By comparing to other large tech companies, we can see just how impressive these margins have been.

Microsoft also has a fortress balance sheet with $111 billion in short-term investments and total net debt of negative $52 billion at last report.

Microsoft has also been aggressively buying back stock. This has multiple advantages. First, it supports the share price on the open market as there is a baseline level of demand. Next, by reducing the share count, the company's EPS rises and the stock price is likely to follow suit. The most recent buyback program calls for up to $60 billion in buybacks or about 2.5% of the market cap. As shown below, the share count has been steadily decreasing and is down well over 2% over the past three years. At the same time, buybacks have steadily increased.

Mentioned above, Cloud services accelerated its growth in Q1 fiscal 2022. These services compete directly with Amazon Web Services (AWS) (AMZN) and Google Cloud (GOOG). All of which are growing rapidly as they jockey for position. Note that Microsoft is reporting that Azure alone grew 50% in Q3 fiscal 2022 over the prior year. The chart below compares the three platforms side by side and uses Microsoft's revenue for all server products and cloud services.

Chart created by author with data from company SEC filings.

Amazon remains the leader, however, Microsoft is gaining market share. According to Statista, Microsoft is now servicing over 20% of the total market.

Overall server products and cloud services revenue increased 35% and 33% in constant currency. Azure and other Cloud Services grew 50% and 48% in constant-currency ahead of expectations, driven by our consumption based services. -Amy Hood, CFO on Q3 earnings call.

Microsoft also sees tremendous opportunities in the Metaverse, which I have written about in some detail here. Microsoft Mesh for Teams will allow for a digital environment for users to interact virtually. The potential total addressable market for the Metaverse will be in the hundreds of billions in the coming years, according to Bloomberg.

Is MSFT Stock A Buy, Sell, or Hold?

At the current forward PE and given the EPS estimates for fiscal 2022 and 2023, I predict that Microsoft can hit the $400 per share mark within 18 months - barring a macroeconomic event. An earnings miss could also delay the rise to $400 per share, however, given recent history, it is much more likely that the current estimates are too low rather than too high. In the meantime, investors can relax and collect their dividends.

Analysts on Wall Street are very bullish on Microsoft according to Seeking Alpha's Wall Street Ratings. 39 analysts are bullish or very bullish, while two are neutral. There are no bearish ratings. The average short-term price target is $364.81, with the high target coming in at $410. The low target is $300.

Microsoft has a storied history, and this current time period may go down as one of its best performances. I remain bullish on Microsoft for long-term investors.

Bradley Guichard
5.03K Followers
My philosophy is to invest in equities with focus on companies which produce generous amounts of positive cash-flow and have growth opportunities to benefit medium to long-term investors. I have a diversified portfolio including growth and value equities, REITs, dividend stocks, and like to use options for income when the opportunity arises. I have over 15 years of experience in the market. I am a practicing CPA, however I have learned about investing more from avid reading, market watching, experience, and of course making mistakes over the years. Also, am an admitted Excel junkie. I try to remember Mark Twain's wisdom: "It ain’t what you don’t know that gets you into trouble. It’s what you know for sure that just ain’t so"Thank you very much for reading and please feel free to leave me a message in the comments or send a private message. All the best!

Disclosure: I/we have a beneficial long position in the shares of MSFT, AMZN, GOOG either through stock ownership, options, or other derivatives. I wrote this article myself, and it expresses my own opinions. I am not receiving compensation for it (other than from Seeking Alpha). I have no business relationship with any company whose stock is mentioned in this article.