My methodology for analyzing an industry-specific ETF is to first analyze the macroeconomic backdrop of the sector to determine if the fundamentals support purchasing the ETF. I then look at the ETF's relative performance versus its peers and the charts to determine timing of a potential transaction.

The macroeconomic backdrop for the industrial sector ETF (NYSEARCA:XLI) is positive.

The latest ISM® Manufacturing PMI® was very strong (the author has written permission to use the latest month's report).

There are, however, problems.

These issues have been reported in the financial press for some time; they are anything but surprising.

The latest report from Markit Economics confirms all aspects of the above data:

The seasonally adjusted IHS Markit US Manufacturing Purchasing Managers’ Index™ (PMI™) posted 58.3 in November, down fractionally from 58.4 in October and lower than the earlier release 'flash' estimate of 59.1. The latest reading was the lowest since December 2020. Although remaining well above the 50.0 neutral level, the PMI was boosted in particular by the further near-record lengthening of supplier lead times and increased inventory building. While normally considered positive developments associated with an expanding manufacturing economy, the lengthening of lead times reflected an ongoing supply shock and inventory building often reflected concerns over the future supply situation.

Other economic releases further illustrates the strength of the industrial sector. The latest industrial production report from the Federal Reserve contained a solid increase:

New durable goods orders have been a bit softer in the last two reports:

Durable goods orders crashed during last Spring's shutdowns but have since regained all their losses (Chart from the FRED system).

Despite supply-chain issues, the industrial sector is very strong, indicating that the macroeconomic backdrop supports buying the (XLI).

There's little in the XLI's performance relative to its peers to suggest this is a good time to buy.

That conclusion is supported by an analysis of the 1-year chart from Stockcharts.com: 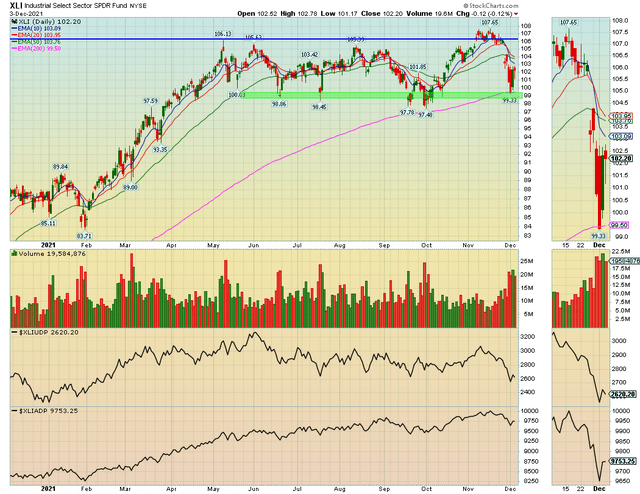 For the most part, the ETF has been trading between the 99 and 106 level since May. In November, prices tried to break out. But they couldn't get much beyond the 107-108 level. Last week they dropped towards the 200-day EMA on higher volume.

While the macroeconomic backdrop is positive, the ETF's relative performance and chart indicate this is not the time to take a new nor add to a an existing position.